MARION — Illinois Comptroller Susana Mendoza joined state and local officials at a press conference in the Williamson County Administration Building to talk about two bills being introduced in the Illinois House and Senate.

Together with State Rep. Dave Vella of Rockford and State Sen. Christopher Belt of Swansea, Mendoza is championing HB 5785 and SB 4229, which are measures to ensure timely compensation for the next of kin of fallen first responders and members of the armed forces.

Mendoza first became aware that a problem existed with timely compensation to families during a memorial service at the Police Officers Memorial in Springfield. Eleven officers were honored at the memorial service.

Tammy Pierce, mother of fallen officer Brian Piarce Jr., whispered into Mendoza’s ear after the memorial service that they were not able to access funds set aside for survivors because the fund was out of money.

Officer Brian Piarce Jr. was killed in the line of duty on Aug. 4, 2021. Officer Pierce was not married, so his parents applied for money from a state fund that is set aside for the families of fallen first responders. They were told they qualified, but the fund was out of money.

“It seemed absurd to me. Legislators budgeted $5 million that year in death benefits. We underestimated by almost half what benefits would be needed,” Mendoza said.

She added that no family should have to wait longer than it takes for the Comptroller’s Office to get the claim and pay it.

“It is the very least we can do,” Mendoza said.

The legislation also will extend the time a family has to apply for benefits. They currently have one year; the new law extends it to two years.

Tammy Pierce told those gathered that 24,948 officers were killed in the line of duty in the past 30 years in Illinois. She said it is in their honor that we need to stand behind this legislation and take care of the families of officers who will give their lives in the future.

“We ask the public to get a hold of their representatives and express their support for this legislation,” Bullard said.

“There’s no such thing as an ordinary day for our first responders and safety officers,” Belt said.

“These guys have our backs every day, and we’re going to have yours,” Mendoza said to the police officers and firefighters gathered at the press conference.

In addition to Tammy Pierce, two other women in the audience have lost children in the line of duty. Sharon Reveal, mother of Firefighter Kevin Reveal who died Sept. 29, 1996, and Beverly Conrad, mother of Officer Adam Conrad who died Jan. 20, 2016, both attended the press conference.

“I think it’s wonderful. Specifically, I like the extension to apply for benefits after the first year,” Conrad said.

Conrad did not know they could apply for benefits until that first year had passed.

Reveal’s family, which included three small children, was able to get some benefits. One of his sons is a trooper with Illinois State Police.

Editor's note: This story was updated to correct the spelling of the Pierce name and the comptroller's first name.

Price of gas: Why does Europe pay so much more than the US?

Price of gas: Why does Europe pay so much more than the US? 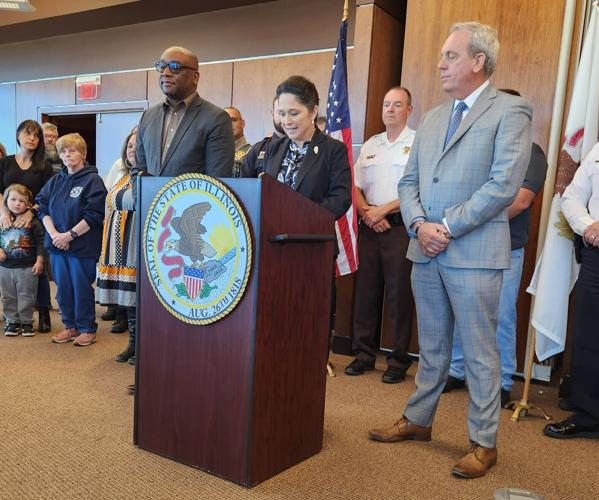 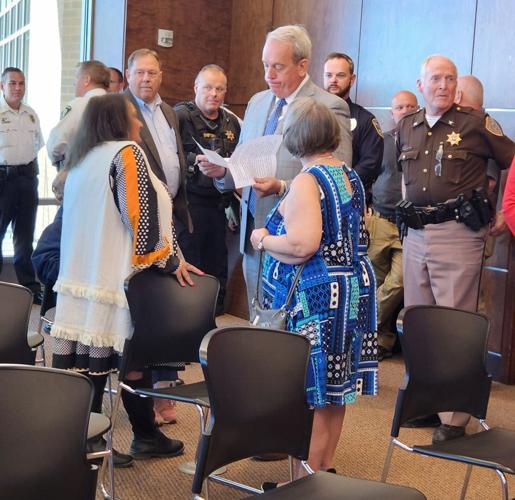 Sen. Dale Fowler talks to Tammy Pierce (left) and Beverly Conrad (right) before a press conference in Marion. Both ladies, along with Sharon Reveal, are mothers of fallen first responders.