SPRINGFIELD — Criminal justice reform is high on Democratic Gov. J.B. Pritzker’s agenda this year, but a legislative committee hearing Thursday in Chicago showed that reform advocates and the law enforcement community have widely differing views on the issue.

In January, Pritzker said ending cash bail and mandatory minimum sentences would be among his top priorities during the 2020 session, and those two subjects were the focus of Thursday’s hearings.

“For years, there has been a narrative that our cash bail system and sentencing laws are necessary for public safety, and we support this narrative with billions of dollars each year,” Lt. Gov. Juliana Stratton said as the hearing began. “But the stories we've heard call this narrative into question, and we must ask ourselves whether our current policies and practices are the best way to protect public safety.”

There are more than 38,000 people being held in Illinois state prisons, according to Department of Corrections data. Of those, more than half are black, even though African-Americans make up only about 13 percent of the state’s population. Many thousands more people are held in local jails while they await trial, often because they can’t afford to post their bail.

“We know that over-incarceration based on poverty means that thousands remain in jail because of the lack of access to money, not because a judge has made a determination they are ineligible for release,” said Sharone Mitchell of the Illinois Justice Project. “We know that there's a massive transfer of dollars from communities that can barely take the hit. And we know the vast majority of people who are paying these bonds are not the folks that have been accused of crimes, but women. In Cook County it's very much black women, mothers, sisters, and partners that are taking the financial hit of paying these bonds.”

One of those women, Brittany Williams, a 29-year-old mother of three from Chicago, said her life was turned upside down in October 2017 when her husband was arrested on a traffic charge. His bail was set at $100,000, meaning he needed to pay 10 percent, or $10,000, to be released.

“This experience was traumatic because it took time away from my newborn and it caused me to get back to work before I was even ready,” Williams said. “We lost our condo in Glendale Heights, and we had to move into the city of Chicago with a family member, my sister-in-law. That was hard on us because her living arrangements were not the best. Myself and my children had to sleep on the floor. And that alone made me feel like I had failed as a parent.”

Thursday’s hearing, however, came on the same day the Chicago Tribune published a story calling into question the city of Chicago’s own bail reform initiative that began in 2017. Under that program, which was ordered by Cook County Chief Judge Timothy Evans, judges in that circuit are not allowed to set bail amounts so high that a defendant can’t afford to pay it.

Evans released a report in May suggesting there had been no increase in violent crime since that order went into effect and that only a “very small fraction” of people charged with violent crimes committed new crimes after they were released. But an analysis by the Tribune uncovered flaws in both the data and the analysis used in that report, and the article said there was evidence that many more crimes were committed by defendants while out on bail.

Also in 2017, the General Assembly passed a statewide bail reform law that provides for a presumption that most people charged with nonviolent crimes, known as “Category B” offenses, could be released on conditions that do not require cash bonds. It also provides that cash bonds can be required for more serious charges, “Category A” offenses, but that a person could not be held solely for an inability to pay that bond.

DuPage County State’s Attorney Robert Berlin testified that since that law went into effect, his county has seen an overall increase of 53 percent in defendants failing to appear for their court dates.

“Many of these cases are people charged with robbery, aggravated battery, aggravated DUI — serious crimes, where defendants are failing to show up in court. That is the sign of a broken system,” Berlin said.

He also noted that under the Illinois Constitution, victims of crimes have a right to be compensated for their injuries or losses and that in many jurisdictions, bail money is used to help pay for that restitution. Without cash bail, he said, many victims could go uncompensated.

The committees also heard testimony on the subject of mandatory minimum sentences, which many people argue have led to a dramatic increase in prison populations throughout the United States.

“The issue of crime has been weaponized in electoral politics, with members of both parties more than willing to attack opponents as being soft on crime and engage in fear-mongering in order to justify creating new offenses, increasing penalties for existing ones, and taking away opportunities for sentence reduction or parole,” said Ben Ruddell, director of criminal justice policy for the ACLU of Illinois. “Predictably, the result has been that prison populations have exploded in every state, including Illinois.”

Ruddell argued for doing away with mandatory minimum sentences entirely. But Rep. Patrick Windhorst, R-Metropolis, a former state’s attorney in Massac County, argued that “truth in sentencing” has value for both the public and crime victims.

“I know that there's a lot of disagreement about truth in sentencing, and there are some stories that perhaps don't always paint it in the best light,” Windhorst said. “But I think for the public to understand what the person’s sentence is is important. And also, I think it's important for victims and families of victims that when a sentence is given, they can, in violent crime situations, understand that is what the person who's harmed my loved one or myself is going to receive.”

Thursday’s hearing included members of two Senate committees and one House committee that will deal with criminal justice reform issues this session. Sen. Elgie Sims, a Chicago Democrat who chairs the Criminal Law Committee, said it was the first in a series of hearings that will be held throughout the state.

A bipartisan coalition of state lawmakers and advocacy groups announced an effort in both chambers Thursday to overhaul the way Illinois’ legislative districts are drawn.

Ahead of budget address, Pritzker touts $225 million in budget savings

Gov. J.B. Pritzker said Friday his administration has already identified $225 million in budget savings for the upcoming fiscal year, and as much as $750 million through the end of his first term.

One month ahead of the tipoff of March Madness, Illinois lawmakers — backed by a pair of NBA brothers — are renewing a push to allow college athletes to profit from the use of their name and likeness.

After fielding calls from dozens of frustrated gun owners, several Southern Illinois lawmakers are pushing a package of bills they say aim to … 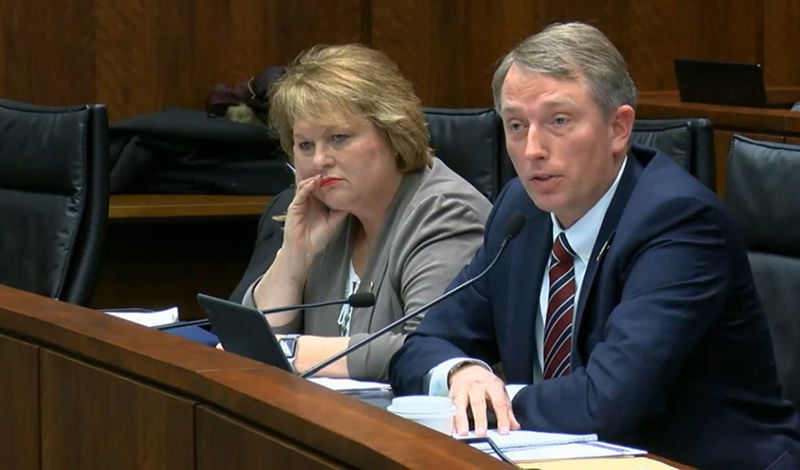 In a file photo from February, Republican Reps. Terri Bryant, of Murphysboro, and Patrick Windhorst, of Metropolis, argue that cash bail and mandatory sentences help protect crime victims and the general public during a legislative committee hearing in Chicago. 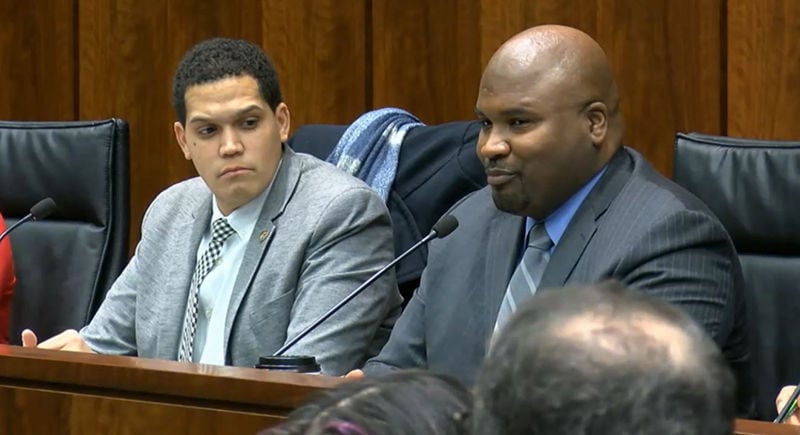 Democratic Sens. Robert Peters, left, and Elgie Sims, both of Chicago, preside over a joint legislative hearing on criminal justice reform Thursday in Chicago.Sims, who chairs the Criminal Law Committee, said it was the first in a series of hearings that will be held throughout the state.