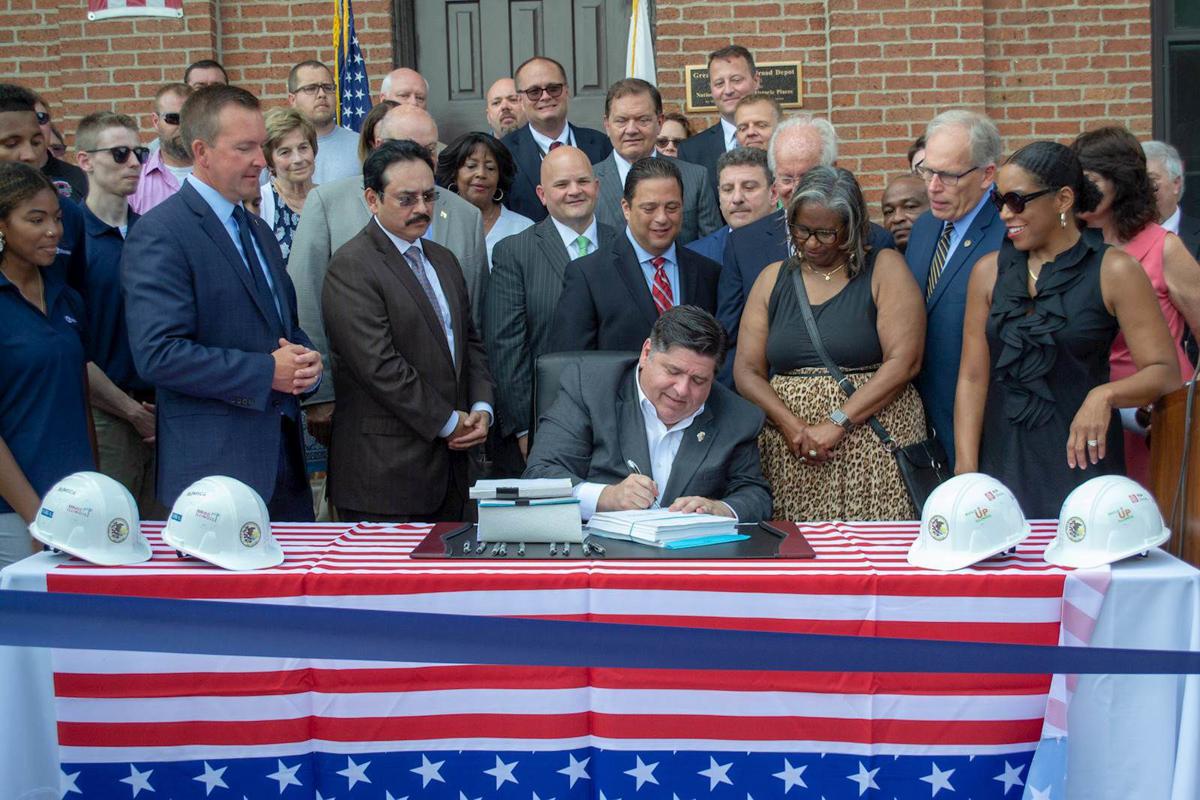 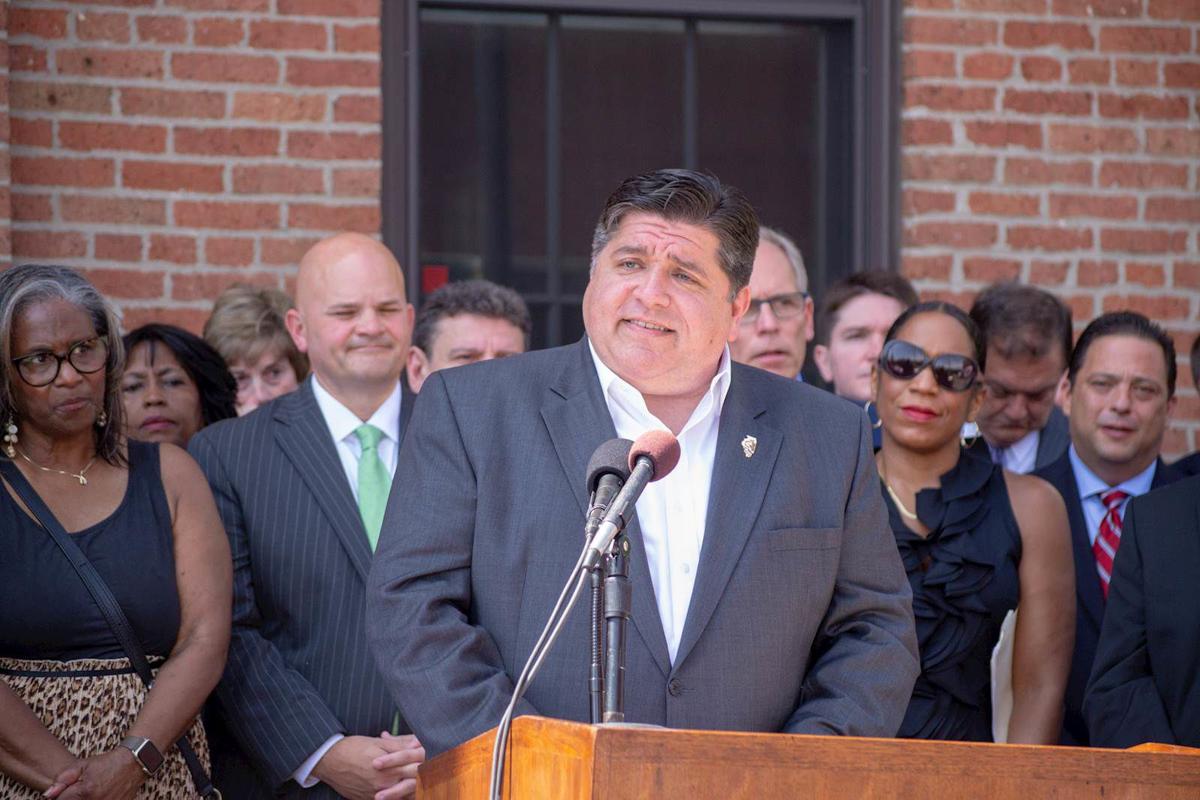 Gov. J.B. Pritzker speaks a bill-signing event in June in Springfield for a package of bills enacting a $45 billion capital infrastructure plan.

SPRINGFIELD — Democratic Gov. J.B. Pritzker joined a bipartisan group of lawmakers, business leaders and labor representatives in Springfield Friday as he signed a package of bills enacting a $45 billion statewide infrastructure plan in one of four stops on a tour of Illinois.

Pritzker stood in front of the state capital’s historic Lincoln Depot as he defended a 19-cent per-gallon increase to the state’s motor fuel tax while highlighting the economic and employment benefits of the massive construction plan.

He said the six-year capital plan could create 540,000 jobs while investing in roads, bridges, railways, universities, early childhood centers, a state crime lab and veterans homes, among others.

“With these investments, we’re creating and supporting hundreds of thousands of new jobs in our state,” Pritzker said. “This is more than an infrastructure plan. This is a job creation plan the likes of which our state has never seen.”

House Bill 62, the infrastructure plan dubbed by Pritzker as “Rebuild Illinois,” allocates $33.2 billion for transportation, including $11 billion for the Illinois Department of Transportation’s multi-year plan and $14 billion for other road and bridge projects. It also includes $4.7 billion for mass transit, $1 billion for passenger rail and millions for ports, aeronautics and other projects.

SIU Carbondale gets about $140 million in construction, upgrades in capital bill

State Sen. Andy Manar, a Democrat from Bunker Hill, co-chaired a series of statewide committee hearings leading up to the passage of the bill. He said those meetings showed the need for an infrastructure plan.

“Every community that we heard from — both urban and rural, conservative and liberal — every single community told us their story of crumbling infrastructure and told us in very clear terms that it was time for us to act,” he said.

Pritzker said all of Illinois will benefit from the plan as he defended a portion that dedicates about $6 million to each Democratic state senator for projects in their districts, compared to $3 million for each Republican senator. Democrats and Republicans in the House would each see about half those amounts respectively.

“The fact is that a majority of the funding in the infrastructure bill goes to downstate Illinois,” Pritzker said. “Universities around the state are mostly, almost entirely, in districts represented by Republicans. And that’s where hundreds of millions of dollars, in fact billions when you add it all up, are going to. The money is getting distributed I think very fairly across the state.”

Pritzker also touted a statewide expansion of broadband internet infrastructure, which will receive $420 million in funding.

“When big swaths of our state have no high speed internet, we miss the opportunity for new businesses and jobs in areas of the state that badly need it,” he said.

The plan additionally allocates $4.4 billion to deferred maintenance at state facilities and $1 billion on environment and conservation projects for hazardous waste, sewer and park projects among others. Health care and human services will see $465 million in funding for affordable housing, hospitals, health centers and other grant programs.

Another $1.8 billion is allocated to various “community and economic development” projects such as education and scientific facilities and projects in economically depressed areas. Another $50 million provided by the funding bill will be set aside for bicycle path projects.

Mark Denzler, president of the Illinois Manufacturer’s Association, touted career and technical education measures such as a pre-apprenticeship program that will receive $25 million in funding to “help address the skills gap and workforce challenges facing manufacturers across Illinois.”

Revenues for the capital plan come from a pair of bills — Senate Bills 690 and 1939 — one raising the motor fuel tax and transportation-related vehicle fees, the other enacting a massive expansion of gambling in the state.

Illinois is poised to become the gambling capital of the Midwest

And like the state's last gambling expansion, in 2009, the massive new bill could bring trouble.

The gaming bill — which allows for six new casinos, expansion of gambling at racetracks, added video gaming machines, higher taxes and maximum bets on video gaming machines and the legalization of sports gambling — is expected to generate at least $350 million annually at full implementation and will support vertical capital debt service.

Upfront revenues from license fees would fund “pay as you go” projects. Other revenue would be generated by a $1 per-pack increase to the state’s cigarette tax and a new tax on electronic cigarettes.

Senate Bill 1939 doubles the motor fuel tax to 38 cents to generate $1.3 billion in annual new revenue; increases title fees from $95 to $150 for regular titles and from $95 to $250 for mobile homes; and increases annual registration fees from $101 to $151. Electric vehicle registration fees will increase from $34 every two years to $251 annually.

The title and registration fee increases are expected to generate $529 million in new annual state revenue.

While the gas tax hike had a strong bipartisan roll call in each chamber of the General Assembly and Pritzker said the increase will fund projects that will help drivers save money on vehicle maintenance, not everyone was on board with the change.

State Rep. David McSweeney, a Barrington Hills Republican, said in a statement the governor’s signature on the plan marked “a bad day for Illinois.”

“Doubling the gas tax and increasing vehicle registration fees will hurt Illinois’ low income and middle income families and kill jobs that have been created by small businesses,” he said.

SPRINGFIELD — While Democratic Gov. J.B. Pritzker has been touring the state to promote his signing of capital infrastructure and marijuana le…

SPRINGFIELD — Lack of affordable housing impacts many facets of family life — access to education and health care, for example — for Illinoisa…

Illinois Director of Agriculture John Sullivan, who is leading the state’s latest push to improve rural internet service, does not have to go …

A casino resort? Williamson County Board says you bet!

Gov. J.B. Pritzker speaks a bill-signing event in June in Springfield for a package of bills enacting a $45 billion capital infrastructure plan.