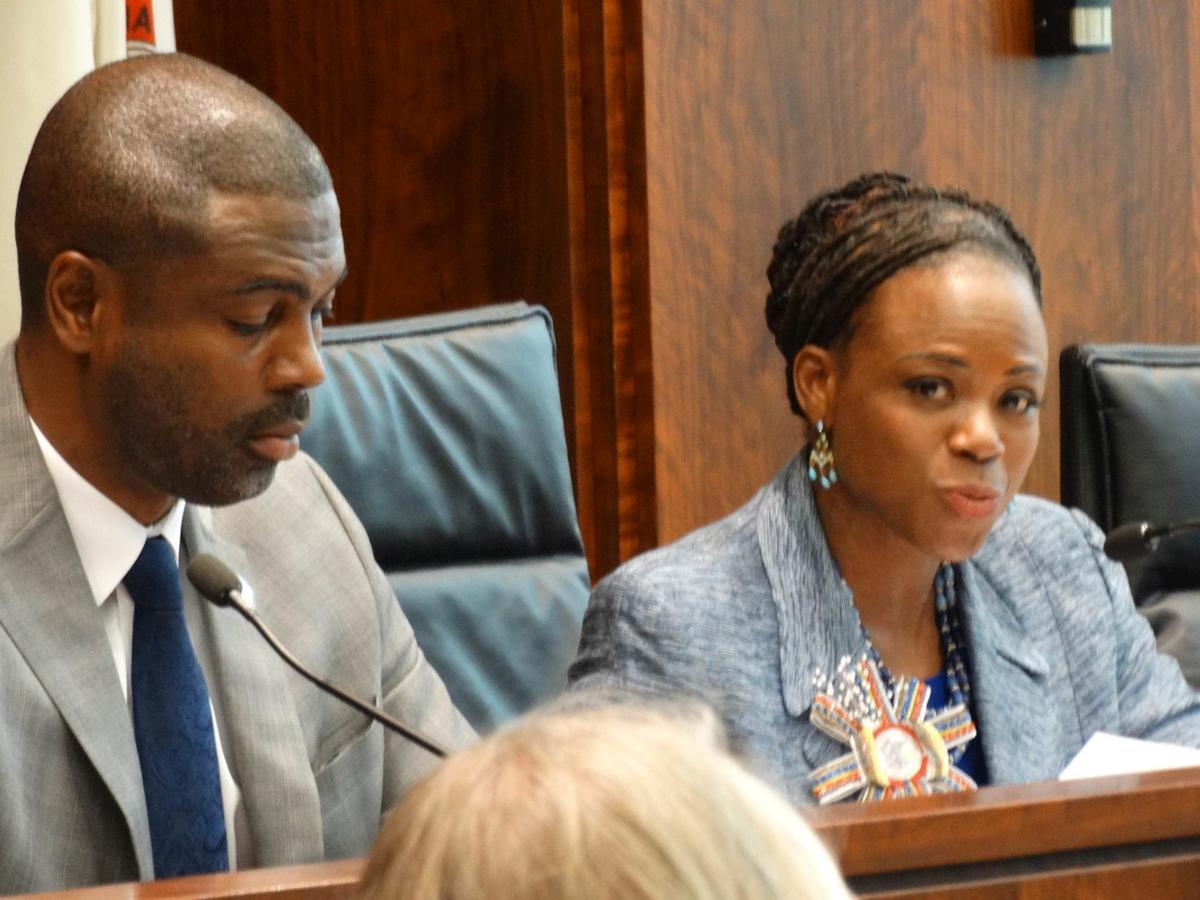 Reps. LaShawn Ford, left, and Carol Ammons co-chair a special legislative hearing Thursday in Chicago looking into the practice of wealthy parents placing their children in guardianship in order to qualify for need-based student financial aid. Representatives of several public universities told lawmakers they didn’t think the practice is widespread. 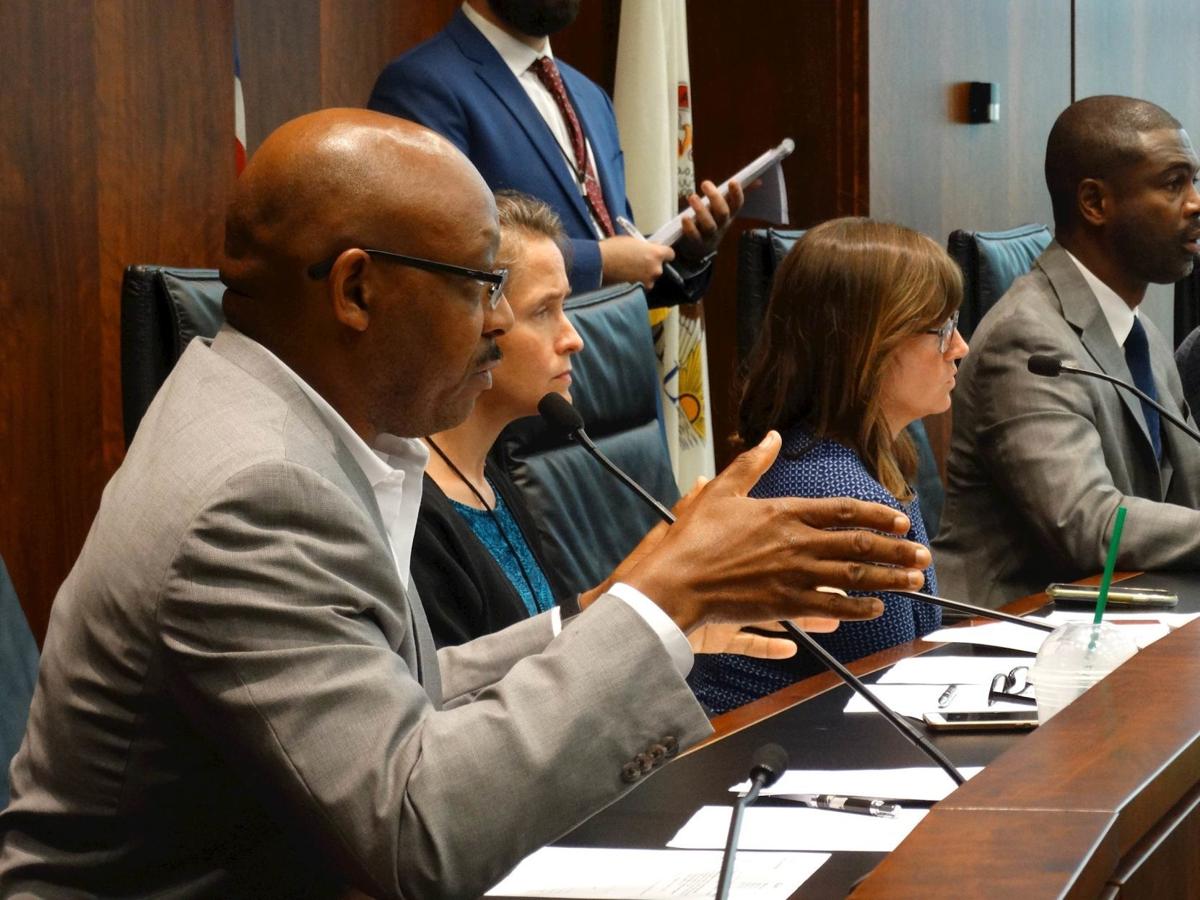 Rep. Will Davis, D-Homewood, questions higher education officials about the practice of placing children in guardianship in order to qualify for student financial aid during a special legislative hearing Thursday in Chicago. Representatives of several public universities told lawmakers they didn’t think the practice is widespread.

CHICAGO — Officials from several public universities in Illinois told a panel of state lawmakers Thursday they do not believe there is widespread abuse of court-ordered guardianships that have enabled some students from wealthy backgrounds to obtain need-based student financial aid.

“We don’t believe that this is a wide national scandal,” Andy Borst, director of undergraduate admissions at the University of Illinois, said during a special hearing in Chicago. “We saw something happening that we felt wasn’t right and we wanted to bring it to light as much as possible and correct it.”

Borst said he first became aware of the practice in May 2018 when he received a call from a high school guidance counselor asking why a particular student was being offered a university-funded scholarship that is normally reserved for students with significant financial needs.

After further review, he said, officials determined the student’s parents were still providing financial support, and the student’s financial aid package was adjusted. He said the university also forwarded the information to the U.S. Department of Education’s inspector general as well as the Illinois attorney general’s office.

At the time, Borst said, university officials thought it was an isolated incident.

But in the fall of 2018, he said, he received another call from a different high school counselor describing a similar situation involving another student. That prompted a review of all students at the university who had indicated on their financial aid application forms that they were in a guardianship arrangement.

“This led to the discovery of a number of other instances of this ethically questionable maneuver,” Borst said.

Since then, Borst said, the University of Illinois has put a number of procedures in place to prevent similar abuses, and it has referred additional cases to the U.S. Department of Education and the state attorney general for further investigation.

come directly from the university, and it has no authority to adjust federal aid such as Pell grants or state-based aid like the Monetary Award Program, or MAP grants, all of which are determined based on information provided in the Free Application for Federal Student Aid, or FAFSA form.

“Again, we want to be clear that this practice appears to be legal, and we have no authority to deny these students MAP or federal aid to which they are eligible according to their FAFSA and the formula set by their funding agency,” Trame said.

The problems at the University of Illinois became public when ProPublica Illinois, a nonprofit investigative news organization, published a story July 29 suggesting there may have been as many as 40 such cases, mainly from upscale communities in the north Chicago suburbs of Lake County.

By placing their teenage children in the custody of a guardian, the students were legally able to declare themselves financially independent from their parents, thereby qualifying for need-based financial aid.

But while the practice appears to have happened several times at the University of Illinois, officials from other universities said they have seen no indication of it happening at their schools.

“I can tell you that I have seen no indication of families having intentionally changed legal guardianship for financial aid purposes,” said Terri Hare, financial aid director at Western Illinois University.

Lawmakers, meanwhile, appeared unsure about how to prevent such abuses from happening in the future. While some suggested imposing tighter controls on financial aid applications, others suggested the problem might be the skyrocketing cost of higher education.

“A system that drives families to cheat is a broken system,” said Rep. Carol Ammons, D-Urbana, chair of the House Higher Education Committee.

The concern for many lawmakers is that by tightening rules on financial aid or guardianship could end up hurting those children who need those services the most.

Borst and Michelle Trame, director of student financial aid at the University of Illinois, offered three recommendations they said would make it easier for school officials to catch potentially fraudulent financial aid applications.

Those included re-evaluating the state’s guardianship laws; giving school financial aid officials more authority to adjust financial aid packages downward, based on reasonable information they have that might not be reflected in their FAFSA form; licensing and regulating independent education consultants who advise students on how to maximize their financial aid awards; and investing more of the state’s education budget hiring high school guidance counselors.

Rep. Dan Brady, R-Bloomington, the Republican spokesperson on the higher education budget committee, said he believes the problem is rooted in something that state government might have little ability to influence.

“I think we find ourselves in uncharted waters here,” Brady said, “and I don’t know, as well-intended as all of us are on this committee, … how we get to a point where we legislate moral and ethical behavior.”

CHICAGO — The new chairman of the Illinois Gaming Board said Thursday he has no illusions about how tough of a job lies ahead.

Parents gave up custody of their children to help them get financial aid. Now, some are abandoning that idea.

Some families are frustrated about a public backlash, saying what they did was legal. They say the real problem is the cost of higher education.

Reps. LaShawn Ford, left, and Carol Ammons co-chair a special legislative hearing Thursday in Chicago looking into the practice of wealthy parents placing their children in guardianship in order to qualify for need-based student financial aid. Representatives of several public universities told lawmakers they didn’t think the practice is widespread.

Rep. Will Davis, D-Homewood, questions higher education officials about the practice of placing children in guardianship in order to qualify for student financial aid during a special legislative hearing Thursday in Chicago. Representatives of several public universities told lawmakers they didn’t think the practice is widespread.