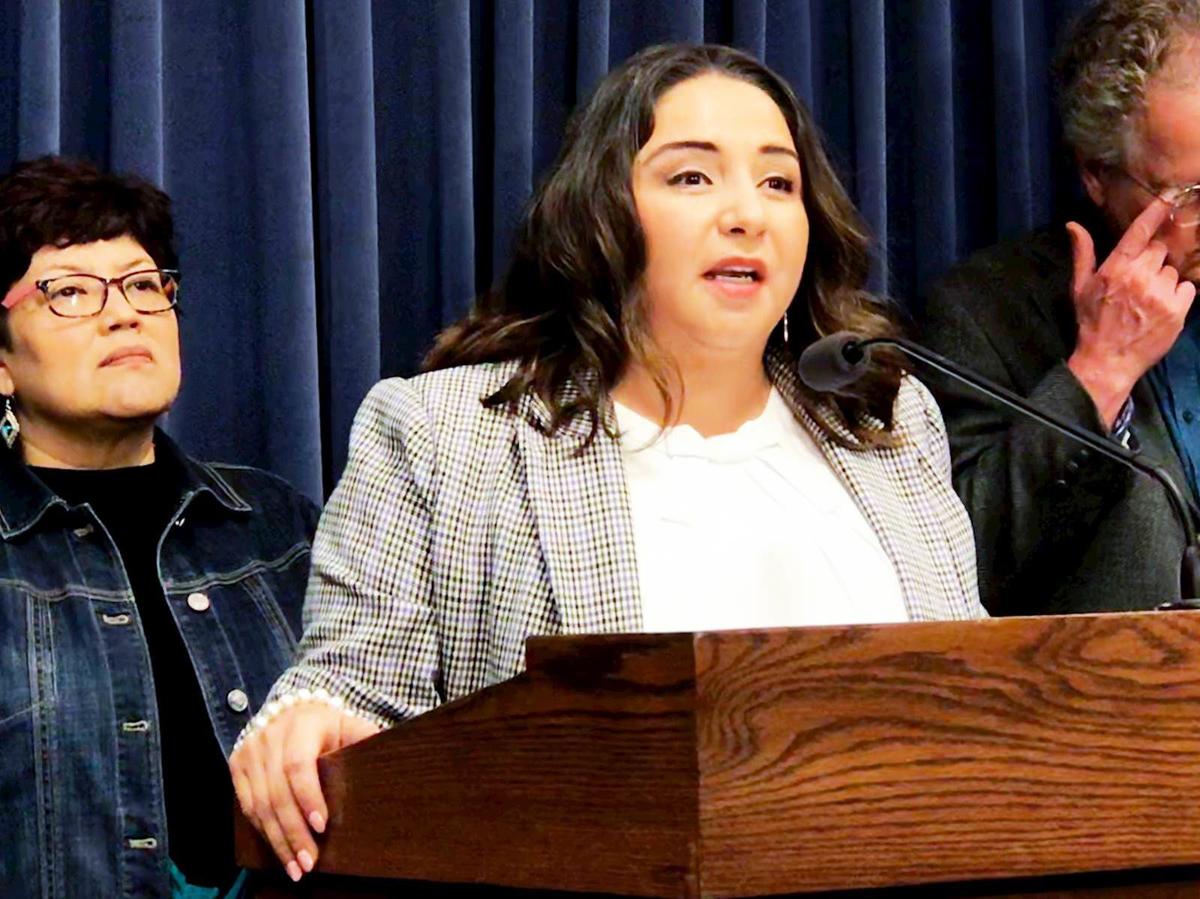 Democratic Rep. Delia Ramirez, of Chicago, speaks during a news conference May 21 at the Capitol in Springfield about the need for capital funds from the state for affordable housing infrastructure. Pictured to the left of Hunter is Imelda Salazar, a parishioner of St. Rita in Chicago and a member of Southwest Organizing Project in Chicago. The her right is Jeff Bartow, executive director of Southwest Organization Project. 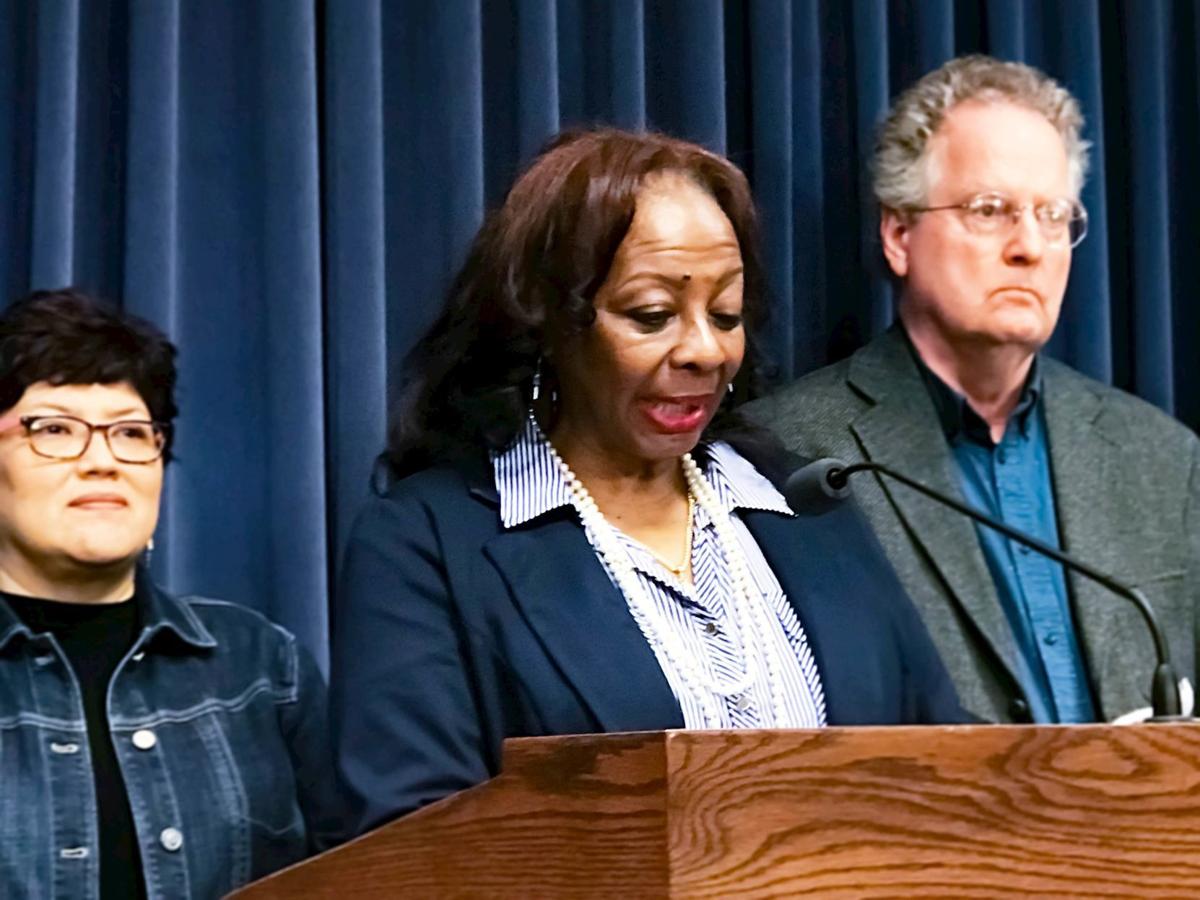 State Sen. Mattie Hunter, D-Chicago, speaks during a news conference May 21 at the Capitol in Springfield about the need for capital funds from the state for affordable housing infrastructure. Pictured to the left of Hunter is Imelda Salazar, a parishioner of St. Rita in Chicago and a member of Southwest Organizing Project in Chicago. The her right is Jeff Bartow, executive director of Southwest Organization Project.

SPRINGFIELD — Lack of affordable housing impacts many facets of family life — access to education and health care, for example — for Illinoisans throughout the state, Sen. Mattie Hunter and Rep. Delia Ramirez said.

It’s a truth the Chicago Democrats said they each experienced before their time in office. Each has a background in social service work — Hunter as a community organizer who grew up in public housing and Ramirez as director of a community social service agency.

Illinois’ affordable housing program received $200 million through the state’s first capital plan in 10 years, signed by Gov. J.B. Pritzker in late June. Other investments totaling about $129 million are included elsewhere in the budget.

And while Hunter and Ramirez said that money will make a “significant difference,” they added it will take $1 billion to properly address the infrastructure need in Illinois.

“I’m trying to be the kind of organizer that celebrates the small victories, and certainly the funding was a small victory and we’re grateful for it,” Ramirez said. “It means, at a minimum, we’ll be able to develop another 2,000 units of affordable housing — so it’s another 2,000 families that otherwise would not be able to have some kind of permanent, stable housing — and certainly that’s a victory. But I certainly can’t say enough about how much more we need.”

Allison Clements, executive director of the Illinois Housing Council, said a larger investment in permanent, supportive housing is needed to help renters, including senior citizens, and those who are “most vulnerable,” such as people with disabilities, veterans and those who are homeless.

Most of the affordable housing funds will be administered by the Illinois Housing Development Authority, a state agency created to support such projects. Andrew Field, IHDA’s deputy director of communications, said the agency will decide how money will be distributed once officials have coordinated with the governor’s office.

Hunter and Ramirez spent months with advocates and stakeholders learning about the struggles Illinois communities and residents face finding affordable housing. There were also many negotiations with budgeting representatives from both chambers of the General Assembly and Pritzker’s administration. Those experiences have made Hunter and Ramirez self-appointed leaders on the issue in their respective chambers.

The two lawmakers have plans for the months leading up to January, when the next legislative session will begin, and affordable housing, Hunter and Ramirez said, becomes a prominent topic.

In the Senate, Hunter will continue meetings with stakeholders and representatives from all levels of government to craft a bill to file when session begins. In the House, Ramirez is working on legislation to develop a task force to formally study housing needs throughout Illinois.

“What I’m trying to do is put together some kind of major coordination effort to see what the federal, city, county and state governments are doing,” Hunter said. “Hopefully, they can assist us in achieving that $1 billion goal, because the state can’t do it all alone. If we don’t talk to one another, we’ll never know what one another is doing.”

As crews demolish housing projects in Cairo, the city finds itself in a familiar place

Hunter serves on a Senate committee that explores special issues, affordable housing among them. Last summer, the group had hearings in Champaign-Urbana, Rockford, East St. Louis, Chicago and Cairo to hear from residents and advocates.

Those testimonies, Hunter said, “really opened up my eyes to the need” for supportive housing around the state, and made her realize collaboration was needed.

Hunter then held a follow-up meeting in Chicago with about 30 representatives from the real estate industry, developers, affordable housing groups and various government officials. Each explained what was happening in communities around the state and offering recommendations for how to begin tackling the issue.

“The most important thing that came out of that meeting was that those groups don't talk to each other,” Hunter said.

After the conference concluded, Hunter said she noticed several attendees broke into smaller clusters to discuss how they could work together. More meetings and conversations need to occur, she added, so “we can come up with some kind of plan we can move forward in January.”

But the first step, Hunter said, “is getting folks to the table.”

“People approach me from all different walks of life and I listen to their stories. From the north side, the west side, northern Illinois, central Illinois, it’s all the same — people want to improve their quality of life,” she said. “As elected officials, it is our responsibility to help. How do we get there? I’m not sure. I’m just determined to pull something major together to try to improve the quality of life for these families.”

Ramirez also plans to have meetings during the summer and autumn, but hers will help her form legislation to be filed in January that will establish a task force to analyze housing needs in Illinois — everything from homelessness to managing and maintaining a mortgage.

“How does it look different in Central Illinois, Chicago and Rockford or East St. Louis, and what are the methods to address housing instability? I want this to be a task force that looks at housing needs across the state, because this is not just a Chicago issue,” Ramirez said.

She envisions the working group meeting for six months to a year, she added.

Affordable housing is one of three issues the House Progressive Caucus will focus on in the upcoming session, and Ramirez said she will take the lead. The governing tenets of the group dictate its belief that government “must play a proactive role” in ensuring Illinoisans have housing.

“A stable place to live is the foundational right on which so many others are built — without stable housing, education, health care, access to work, and so much more are disrupted,” according to the caucus’ Statement of Principles.

The liberal group of house legislators will have hearings before session to “talk about the impact of housing and stability — what it is costing municipalities, what its impact on schools is,” Ramirez said. Caucus members want to learn about community recommendations for legislation.

“That’s in hopes that we’re going to be prepared to introduce one or two pretty extensive pieces of legislation that the Progressive Caucus will fully back and support in January as well,” she said.

Affordable housing is an issue the group is “willing to roll up our sleeves, as we call it, and go all in for,” Ramirez said.

One of her long-term goals is forming a dedicated committee of representatives to consider housing-related legislation, she said. It would be composed of lawmakers who are “far more dedicated, more educated on the issue, and hopefully also passionate about the extent and different means when it comes to housing affordability,” Ramirez said.

SPRINGFIELD — An order Thursday by a downstate judge nullifying each of the COVID-19-related executive orders issued by Gov. J.B. Pritkzer the…

SPRINGFIELD — All of Gov. JB Pritzker’s executive orders since April 8 pertaining to the novel coronavirus pandemic are void because he exceed…

Testifying before the U.S. House Committee, Pritzker said he would like to see a national COVID-19 containment strategy that requires people to wear masks, and reiterates need for federal financial support.

Days after the governor donated $51.5 million of his personal fortune to a committee supporting a graduated income tax constitutional amendment, a new coalition has begun an effort to defeat the measure.

Until Judge Michael McHaney decides whether Pritzker’s April 30 emergency declaration correctly defines COVID-19 as a disaster, the state is procedurally barred from asking a higher court to reconsider the lawsuit.

A federal judge on Thursday denied a request for a temporary restraining order that would have allowed Illinois Republican Party groups to host large fundraising events.

Democratic Rep. Delia Ramirez, of Chicago, speaks during a news conference May 21 at the Capitol in Springfield about the need for capital funds from the state for affordable housing infrastructure. Pictured to the left of Hunter is Imelda Salazar, a parishioner of St. Rita in Chicago and a member of Southwest Organizing Project in Chicago. The her right is Jeff Bartow, executive director of Southwest Organization Project.

State Sen. Mattie Hunter, D-Chicago, speaks during a news conference May 21 at the Capitol in Springfield about the need for capital funds from the state for affordable housing infrastructure. Pictured to the left of Hunter is Imelda Salazar, a parishioner of St. Rita in Chicago and a member of Southwest Organizing Project in Chicago. The her right is Jeff Bartow, executive director of Southwest Organization Project. 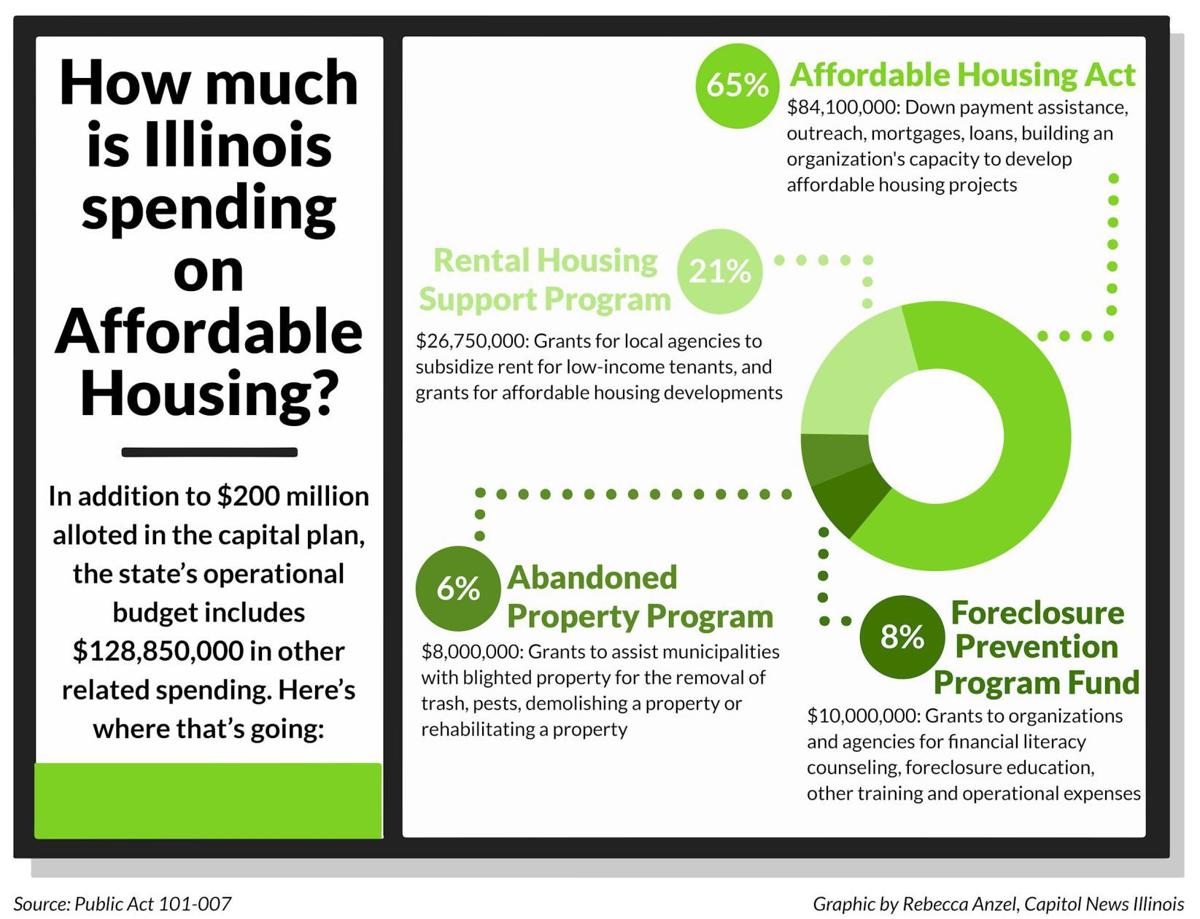