SPRINGFIELD — Illinois political leaders from both parties on Thursday said former Democratic Gov. Rod Blagojevich should remain in prison despite Republican U.S. President Donald Trump’s statement that he was considering commuting the sentence of the ex-governor.

Trump reportedly made his remarks on Air Force One on Wednesday night, saying Blagojevich has “been in jail for seven years over a phone call where nothing happens."

Q&A: Why Trump may be taking a special interest in Blagojevich's case

"I would think that there have been many politicians — I'm not one of them by the way — that have said a lot worse over the phone," Trump said, according to Politico. “I thought he was treated unbelievably unfairly. … And a lot of people thought it was unfair, like a lot of other things — and it was the same gang, the [former FBI Director James] Comey gang and all these sleazebags that did it.”

Illinois House Minority Leader Jim Durkin, a Western Springs Republican, said Trump’s words were “politically driven” and “part of a theme” of the president aiming his actions at “certain groups in the United States who don't believe in the federal government.”

“He specifically mentioned the former FBI director, and, you know, somehow blaming him for this overreach by the FBI and Department of Justice is just wrong for those of us who lived through this,” Durkin said. “I don’t think he understands the different levels of corruption which the former governor was convicted of.”

Blagojevich began serving a 14-year federal prison sentence in 2012. He was convicted on 11 criminal counts related to his effort to sell the former U.S. Senate seat vacated by Barack Obama when he became president.

Blagojevich was also convicted on six counts related to campaign contribution shakedowns, including one count which said he essentially tried to trade $8 million in added state funding to pediatric specialists for a $25,000 campaign donation from a hospital CEO.

In 2015, five of those counts were thrown out in appellate courts, although his 14-year sentence was reimposed months later.

Durkin said Trump’s comments attributing Blagojevich’s misdeeds to “a phone call where nothing happened” was a misrepresentation of the facts, and said talk of a commutation sends the wrong message to the American public.

“It just sends the message that if you become a folk hero within the eyes of the president, and the president wants to use this as an example of why he doesn’t like James Comey, it doesn't seem to be what the founding fathers believed that the executive power should be about,” he said.

He said Blagojevich’s conviction “goes to the heart of the problems that we've experienced in state government for decades” and a commutation “just gives you the signal that corruption is not that bad.”

“I think President Trump has some pretty important things that he ought to be dealing with, not the least of which is the mindless killings over the last weekend, gun safety, I wish he’d focus on that. Governor Blagojevich should remain in prison,” Pritzker said.

Both Pritzker and Trump have a history with the disgraced former governor.

During Pritzker’s successful 2018 gubernatorial campaign, audio tapes of Pritzker and Blagojevich surfaced in which the two men can be heard discussing who should be appointed to Obama’s vacated Senate seat. Those recordings were obtained by an FBI wiretap via the corruption investigation during Blagojevich’s governorship which led to his eventual convictions. They were later published by the Chicago Tribune.

Pritzker was never charged with any wrongdoing by the FBI and the phone recording did not implicate him in any of Blagojevich’s crimes. The Blagojevich tapes did, however, force Pritzker to apologize for comments he made about former Illinois Senate President Emil Jones, calling the African American leader too “crass” for an appointment to the vacant U.S. Senate seat.

Blagojevich was also once a contestant on Trump’s “Celebrity Apprentice” television show in 2010, after he was impeached as Illinois governor but before he was convicted of the various crimes. Trump “fired” Blagojevich from the show in the season’s fourth episode.

On Twitter, Blagojevich’s wife, Patti, said Trump’s comments “make us very hopeful that our almost 11-year nightmare might soon be over.”

While Senate Republican Leader Bill Brady, R-Bloomington, said he was empathetic to what Blagojevich’s family has gone through, he disagreed with the commutation.

“I empathize with the Blagojevich children who have had to deal with the pain their father's actions have caused, and I believe the president recognizes that as well,” Brady said in a statement. “However, based on the evidence we were presented during our successful impeachment proceedings, and then at his subsequent fair trial, I believe the sentence should stand.”

Senate President John Cullerton, a Democrat who presided over Blagojevich’s removal from office in 2009 in the Senate, released a statement in response to Trump’s comments as well.

“With a unanimous vote the Illinois Senate removed him from office and barred him from ever serving here again, and there’s not a damn thing Donald Trump can do about that,” Cullerton, of Chicago, said in the statement.

A spokesperson for the Illinois Republican Party did not return an email request for comment.

CHICAGO — The new chairman of the Illinois Gaming Board said Thursday he has no illusions about how tough of a job lies ahead.

BELLEVILLE — U.S. Rep. Mike Bost, R-Murphysboro, confirmed he spoke with President Donald Trump and his acting chief of staff just before the … 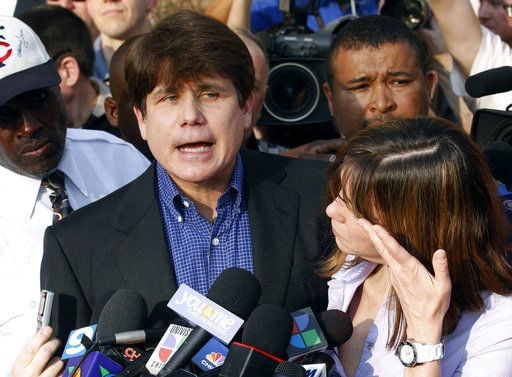 Former Illinois Gov. Rod Blagojevich speaks to the media on March 14, 2012, outside his home in Chicago, as his wife, Patti, wipes away tears, a day before reporting to prison after his conviction on corruption charges. 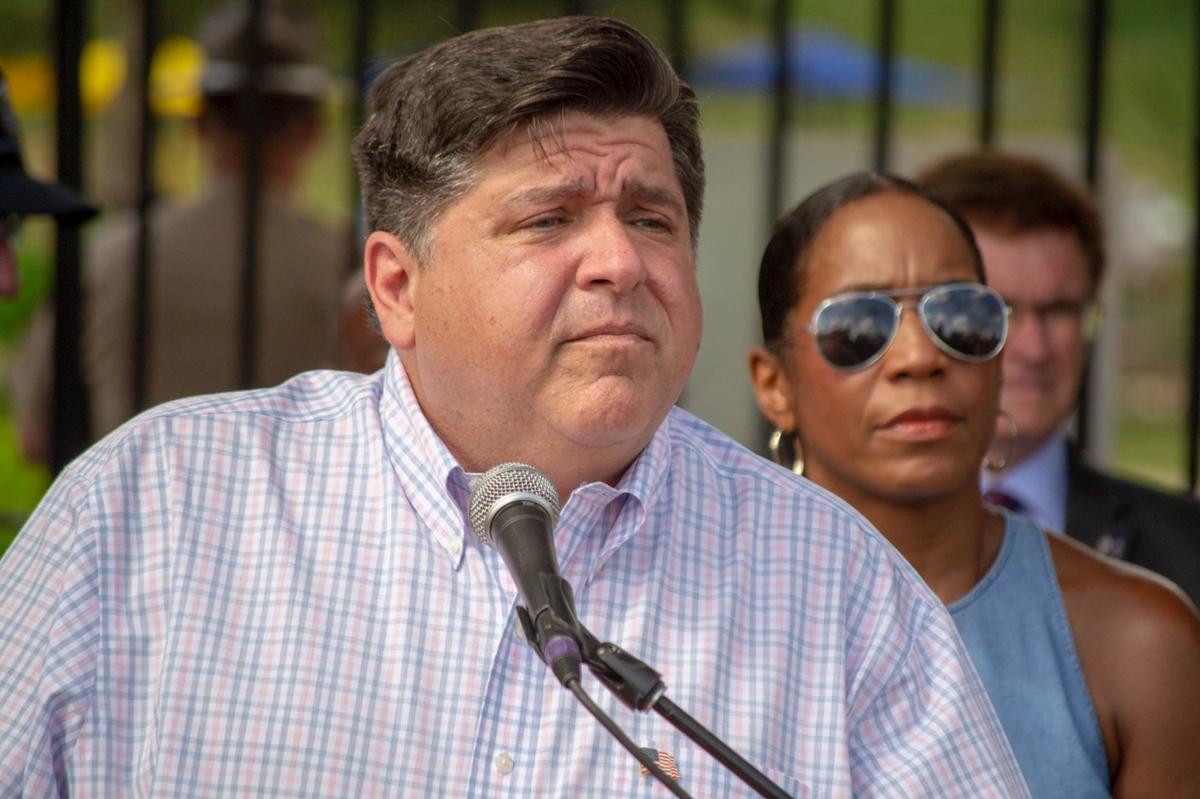 Gov. J.B. Pritzker stands next to Lt. Gov. Juliana Stratton as he takes questions after a ribbon-cutting ceremony at the Illinois State Fair on Aug. 8 in Springfield. Pritzker on Monday vetoed a bill that would have provided a sales tax exemption on the sale of private jet parts and components retroactive to 2010 and continuing through 2024.