SPRINGFIELD — After four years of fiscal austerity and the pro-business, anti-union agenda of former Republican Gov. Bruce Rauner, Illinois lawmakers took a sharp turn to the left during the just-completed legislative session, passing a budget with more than $1 billion in new spending and a host of new, more liberal social policies.

Those social policies include raising the minimum wage to $15 an hour by 2025, legalizing recreational marijuana and sports gambling and declaring access to reproductive health services, including abortion, a “fundamental right.”

Although many of the initiatives enacted this session were debated for years in Illinois, most observers credit first-year Democratic Gov. J.B. Pritzker for pushing them through. But Pritzker also had help from Democratic supermajorities in both chambers of the General Assembly — majorities that resulted from a “wave” in the 2018 election that changed the course of Illinois politics.

Christopher Mooney, who teaches state politics at the University of Illinois at Chicago, said the Land of Lincoln was always something of an outlier among Midwestern states. They are traditionally known for being moderate-to-conservative in their policies and slow in making big, sweeping changes.

“We’re not Iowa. We’re not Wisconsin. We’re not Michigan,” he said in a phone interview. “We have a different kind of economy. And we have Chicago as basically a third of the state, and if you count the metro area, it’s basically two-thirds of the state.”

Rauner’s election in 2012, Mooney said, was largely the result of the unpopularity of his predecessor, former Democratic Gov. Pat Quinn. He added that much of Rauner’s true conservative character was not revealed to voters until after he took office in 2013.

Because of that, Mooney said, the election of Pritzker and a supermajority of Democrats in 2018 and the sharp turn to the left that followed can really be seen as a kind of course correction for Illinois rather than a long-term reversal.

“After four years with a Republican governor, and under the crazy fiscal situation that we had, and the sort of self-inflicted wounds, problems don’t stop in situations like that,” Mooney said. “It’s like, if you have a bad infection on your foot. If you break your leg, you’ve got to fix that quick because it hurts. But that doesn’t stop the infection from growing.”

For Republicans in the General Assembly, though, the 2019 session was anything but a cause for celebration.

“The last four years under Gov. Rauner, we were able to stop some things because we had more seats,” said Rep. Tony McCombie, a Republican from Savanna. “And they had to have conversations with Republicans, and that’s the most important thing. I believe that that really upset them, that they lost a little bit of control, and they really are showing us and reminding us who they are, what their agenda is, and they’re really giving it to us.”

McCombie is heading up the House Republicans’ 2020 election strategy.

Jason Gerwig, spokesman for Senate Republican Leader Bill Brady, said that while there was unanimous opposition in the party to a graduated income tax, legislative pay raises, minimum wage hike and the Reproductive Health Act, there were some bipartisan agreements.

“We did ... find common ground on investing in our children's education, providing resources for senior care and persons with disabilities, achieving business reforms that will grow our economy, and investing in our state's critical infrastructure needs,” Gerwig said in an email to Capitol News Illinois.

Following is a summary of the major legislation that passed during the 2019 spring session:

Pritzker’s marquee campaign proposal — changing Illinois’ constitution to allow the General Assembly to tax higher income earners at higher amounts — will be on the 2020 November election ballot. The governor also signed a rate structure proposal that would take effect upon the amendment’s approval by voters. That structure would bring in an estimated $3.5 billion while lowering taxes on those earning less than $250,000 and raising the rates on those making more than that amount. Sixty percent of those voting on the question or the majority of those voting in the election must support the change for it to become law.

Beginning July 1, the state’s gas tax will double to 38 cents and the diesel fuel tax will get bumped 5 cents to 45.5 cents total. The measure also shifts 1 percent of Illinois’ sales tax on motor fuel to the road fund every year beginning July 1, 2021. For cars and passenger trucks, registration fees will go from $101 to $151 beginning Jan. 1, 2020, while electric vehicles will be charged a $248 registration annual fee, up from $35 every two years. Other title fees will go from $95 to $150 under the plan, while motor home registrations will cost $250. Other registration fees for certain buses, trucks and trailers will increase by $100.

SIU Carbondale gets about $140 million in construction, upgrades in capital bill

Just about all gambling options will be expanded in the state and new ones added under a sweeping proposal to make Illinois the gambling capital of the Midwest. The bill adds six casinos, expands video gambling and allows sports betting. The state’s casinos, horse race tracks, and professional sports arenas — such as United Center and Wrigley Field — would be eligible to buy a sports betting license. Sports betting will also be allowed online or through mobile applications. Gambling expansion is expected to produce $660 million in its first year due to licensing fees and taxes.

Illinois is poised to become the gambling capital of the Midwest

The gambling expansion also included several new taxes, such as a $1 per-pack cigarette tax increase, bringing the total tax to $2.98. This will produce an estimated $159 million in revenue. A 6 percent daily and 9 percent monthly tax on parking lots and garages will produce an estimated $30 million. The bill would also subject electronic cigarettes, including e-cigars, vapes and hookahs, to taxation as tobacco products at 15 percent wholesale. The bill would also remove a sales tax exemption on traded-in vehicles valued above $10,000, producing $45 million in revenue. Sales tax would also be collected on online purchases made through remote or out-of-state online retailers. All new money, along with all revenues from the gambling expansion bill, would fund a $45 billion capital infrastructure program. These new taxes would begin to roll out from July 1, 2019, to Jan. 1, 2020, pending Pritzker’s approval.

Proponents and opponents agree a bill Pritzker vowed to sign will make Illinois the most liberal state in the nation for access to reproductive health care. The Reproductive Health Act, which repeals and replaces Illinois’ current abortion law, was a source of controversy this session, but it ultimately gained approval from both houses after remaining in legislative limbo for several months.

Those over the age of 21 will be able to purchase and smoke marijuana recreationally beginning Jan. 1, 2020. The measure includes expungement language for those affected by the war on drugs and allows for several new grow and retailer licenses over the life of the program, which could bring in $500 million annually when fully matured.

Wages for Illinoisans will rise to $15 hourly by 2025, going up incrementally each year. The proposal was Pritzker’s first big legislative win in February and was achieved with only Democratic support.

Illinois became the first Midwestern state to change the age to buy cigarettes, e-cigarettes, vapes, chewing tobacco and other goods containing nicotine from 18 to 21. Pritzker signed the measure, and the law takes effect on July 1.

Pritzker made Illinois part of the U.S. Climate Alliance with an executive order, but an ambitious package of energy market reforms will wait until the state’s November veto session or later before becoming law.

SPRINGFIELD — With a fiscal year 2020 operating budget in place and a historic legislative session in the rearview mirror, Illinois Comptrolle…

SPRINGFIELD — Democratic Gov. J.B. Pritzker signed into law one of the most liberal reproductive health care measures in the country last mont…

CHICAGO — A casino in Chicago would not make enough profit under current Illinois law to be worth it, a consultant said Tuesday.

2019 in Illinois politics: Wins and losses, praise and criticism for Pritzker and Democrats

A tumultuous year in Illinois politics draws to its close as the historic legislative accomplishments of May and June give way to a flurry of ongoing federal investigative activity, resignations and indictments. 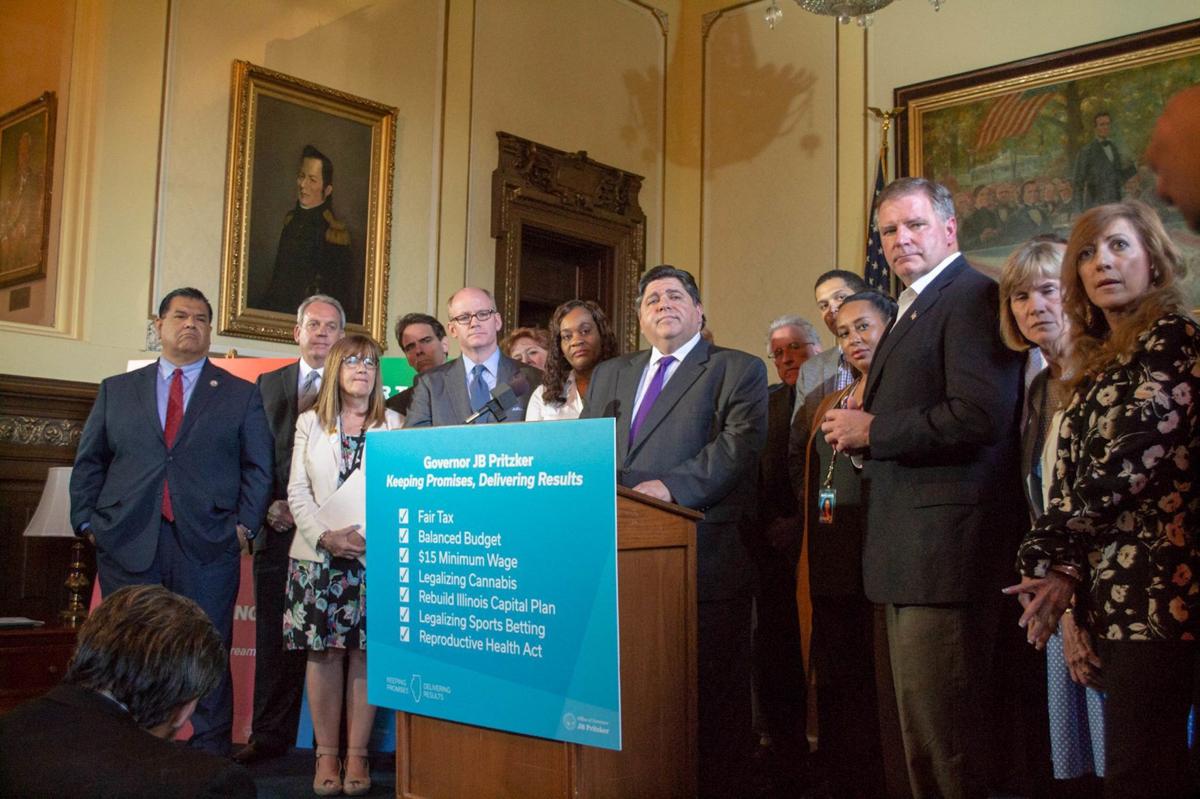 Illinois Gov. J.B. Pritzker stands among a bipartisan group of senators in his Capitol office Sunday after the Senate gave bipartisan approval to several of his key initiatives to close out the legislative session. 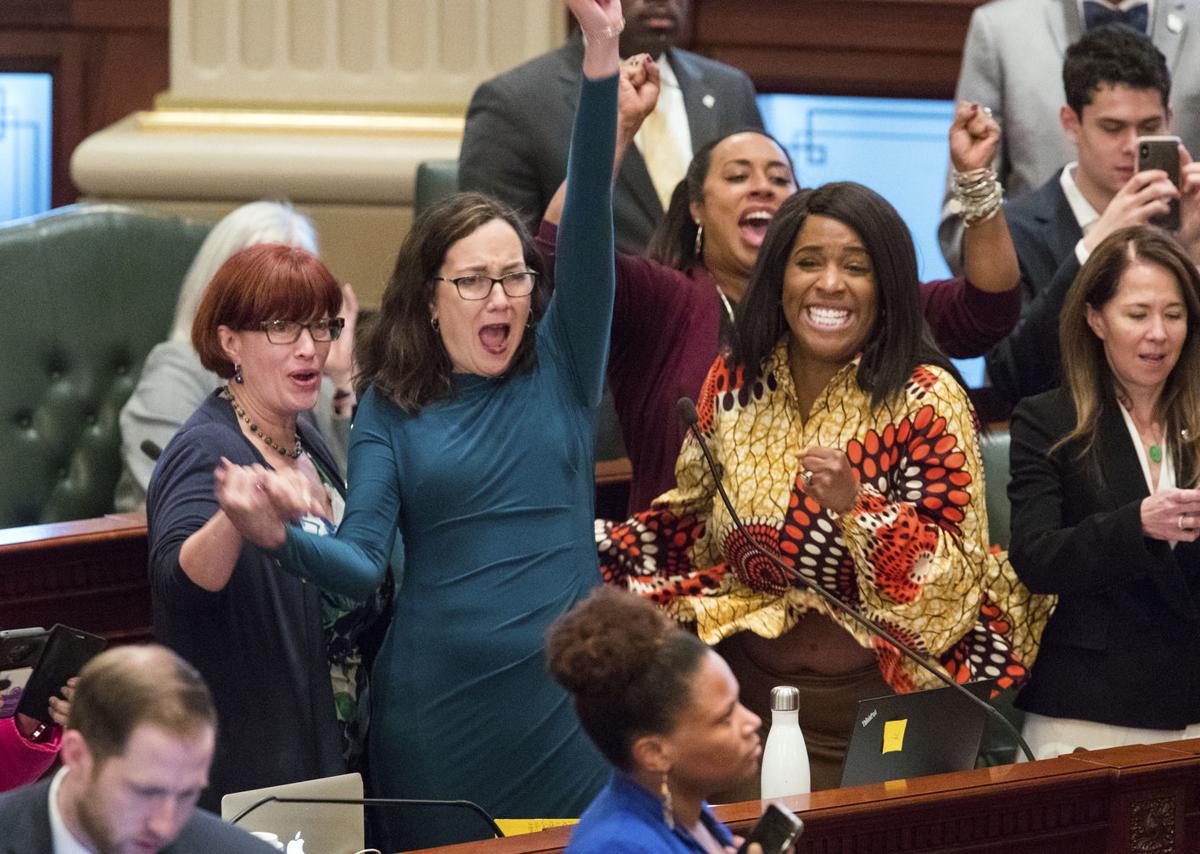