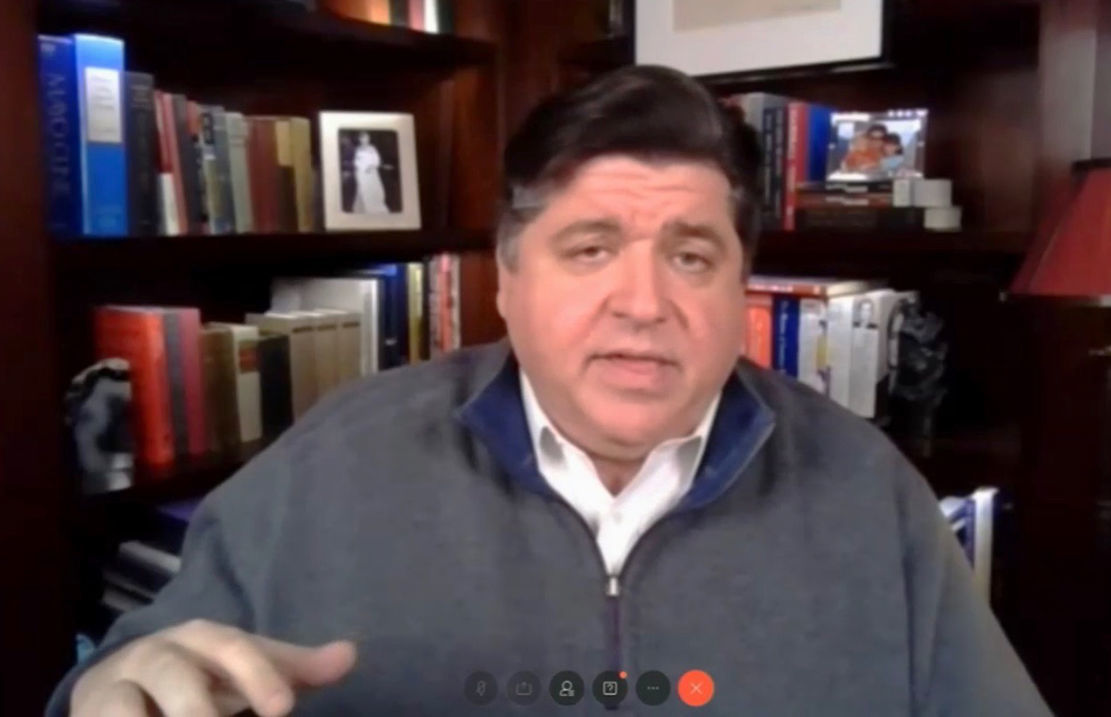 Gov. J.B. Prtizker talks about how the state is going about building up contact tracing of COVID-19 cases during a press briefing from his home Monday in Chicago. 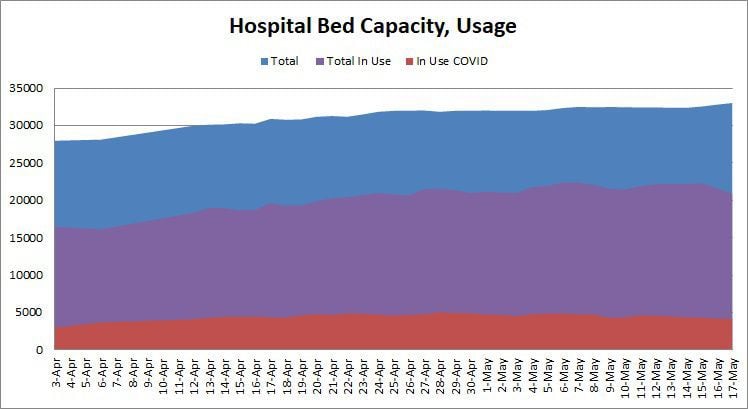 The graphic shows the state’s hospital bed capacity over time from the beginning of April to May 17. Data from Illinois Department of Public Health. 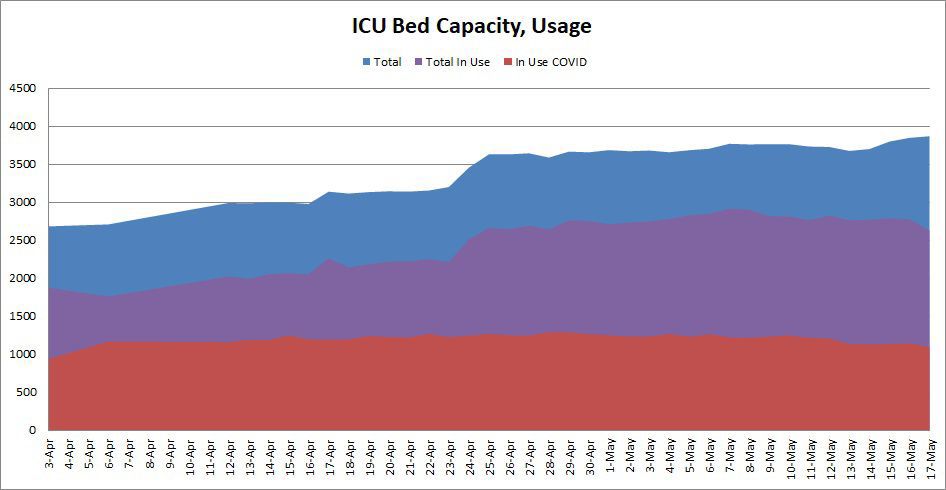 The graphic shows the state’s intensive care unit bed capacity over time from the beginning of April to May 17. Data from Illinois Department of Public Health. 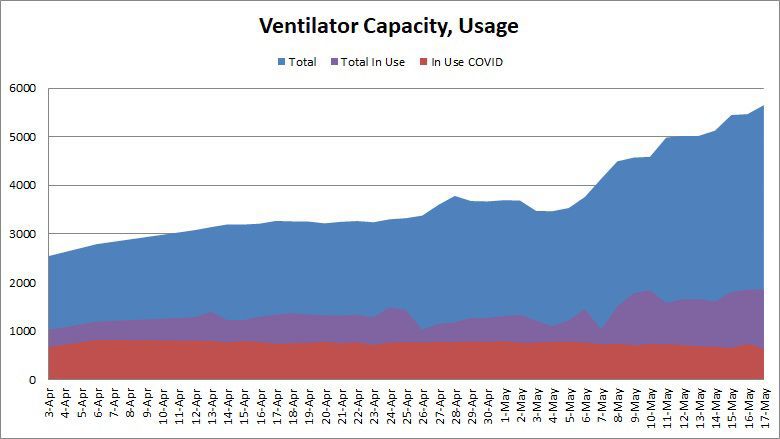 The graphic shows the state’s ventilator capacity over time from the beginning of April to May 17. Data from Illinois Department of Public Health.

The contact-tracing effort for COVID-19 — one that is required to move the state along the governor’s “Restore Illinois” reopening plan — will begin in two pilot counties.

Pritzker said contact tracing, which was used early on in the state’s coronavirus outbreak when the number of cases was manageably small, consists of tracers interviewing people who have newly tested positive about who they had significant contact with in the past 48 hours.

Those people, often family, friends or coworkers, are then contacted and encouraged to stay home and practice social distancing for 14 days or get tested.

“This straightforward process truly does reduce the number of new infections,” the governor said during his daily briefing from his Chicago home. “And if done at scale, it can be a very effective weapon against COVID-19.”

Contact tracing will be conducted on the local level by Illinois’ 97 county and city health departments, but supported by the Illinois Department of Public Health. The two pilot counties, St. Clair County, outside St. Louis, and Lake County, north of Chicago, will immediately ramp up their contact tracing capabilities for newly-discovered COVID-19 patients.

The two counties were chosen “for having significant needs in terms of case numbers in vulnerable populations, a capacity to grow their contact tracing and great existing collaborations of public health personnel, medical students and volunteers already on the ground,” Pritzker said.

The governor said Illinois’ contact tracing program will consist of three parts: a disease reporting software, a common management platform and an app to be used by coronavirus patients and the people they came in contact with.

“The greatest strength of this new, integrated infrastructure that we're assembling is that it will allow us to reach more people and to do so at a faster pace,” he said.

The state is developing the program with help from the nonprofit Partners In Health, which helped Massachusetts build up its contact tracing.

The IDPH has received assessments from half of the local health departments regarding their ability to increase tracing. On Monday, IDPH also sent out requests for work plans and budgets so the department can incorporate them into its plan and get a statewide program operational in the coming weeks.

Pritzker also faced questioning about an emergency rule filed by his administration Friday to allow the state to levy Class A Misdemeanor charges against any business or entity defying Pritzker’s stay-at-home order.

Such a charge is punishable by a fine from $75 to $2,500. Pritzker said that’s a cheaper alternative than revocation of a license and a gentler measure than an IDPH closure order.

The emergency rules filed Friday codify that those disobeying the stay-at-home order are subject to existing IDPH enforcement measures.

“Under that existing law, law enforcement can issue a citation to the business,” Pritzker said. “An emergency rule requiring businesses to follow the existing stay-at-home order has now been put in place. This additional enforcement tool, this citation causes less harm to a business than a total shutdown or loss of a license, but gives local governments and law enforcement the ability to do their job.”

Republicans, however, called the threat of fines an overreach and an insult to business owners already reeling financially from the pandemic.

House Republican Leader Jim Durkin, of Western Springs, said in an earlier video conference Monday that the move could be stricken down in court, similar to a worker’s compensation emergency rule filed amid the pandemic.

“I think the governor and his handlers need to understand that there is a growing dissatisfaction with members of the General Assembly and the public of the governor trying to play not only the executive role but also the legislative role,” he said.

Pritzker said “nothing’s changed” in how the state will enforce the stay-at-home measure, and “Our first and best option for enforcement is what we've all been doing, relying on Illinoisans to be good neighbors and good citizens, working together to keep each other safe.”

Pritzker said he is also concerned about a resurgence of the virus as more people venture farther from their homes.

“I must say that I'm concerned about all of the warnings that have been given by epidemiologists about the potential for a surge in the fall,” the governor said. “Because if people don't learn the lessons over the summer that we've learned over the last couple of months, and then we hit a fall surge. I mean, we're gonna be in big trouble.”

There were 21,297 completed tests recorded in Illinois over the previous 24 hours, putting the statewide total at more than 600,000.

As of midnight Monday, 4,120 people were in the hospital with COVID-19. Of them, 1,096 were in an intensive care unit and 636 were on a ventilator. Those numbers all represented slight decreases from hospitalization highs in April, although the numbers can fluctuate by the hundreds daily.

Third-party candidates will have a little less extra time to get petition signatures this election cycle after a federal judge amended her earlier order last week.

Gov. J.B. Prtizker talks about how the state is going about building up contact tracing of COVID-19 cases during a press briefing from his home Monday in Chicago. 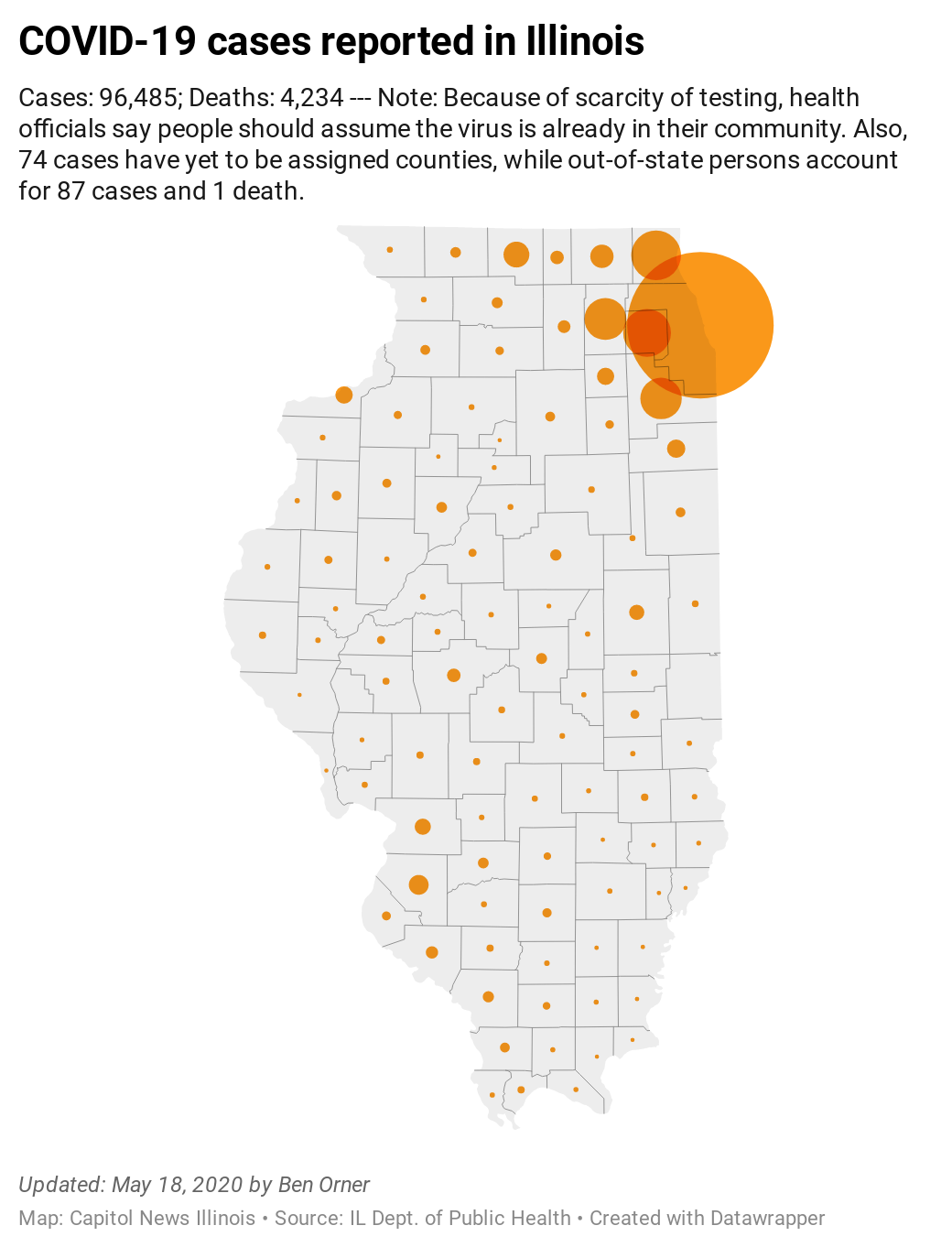 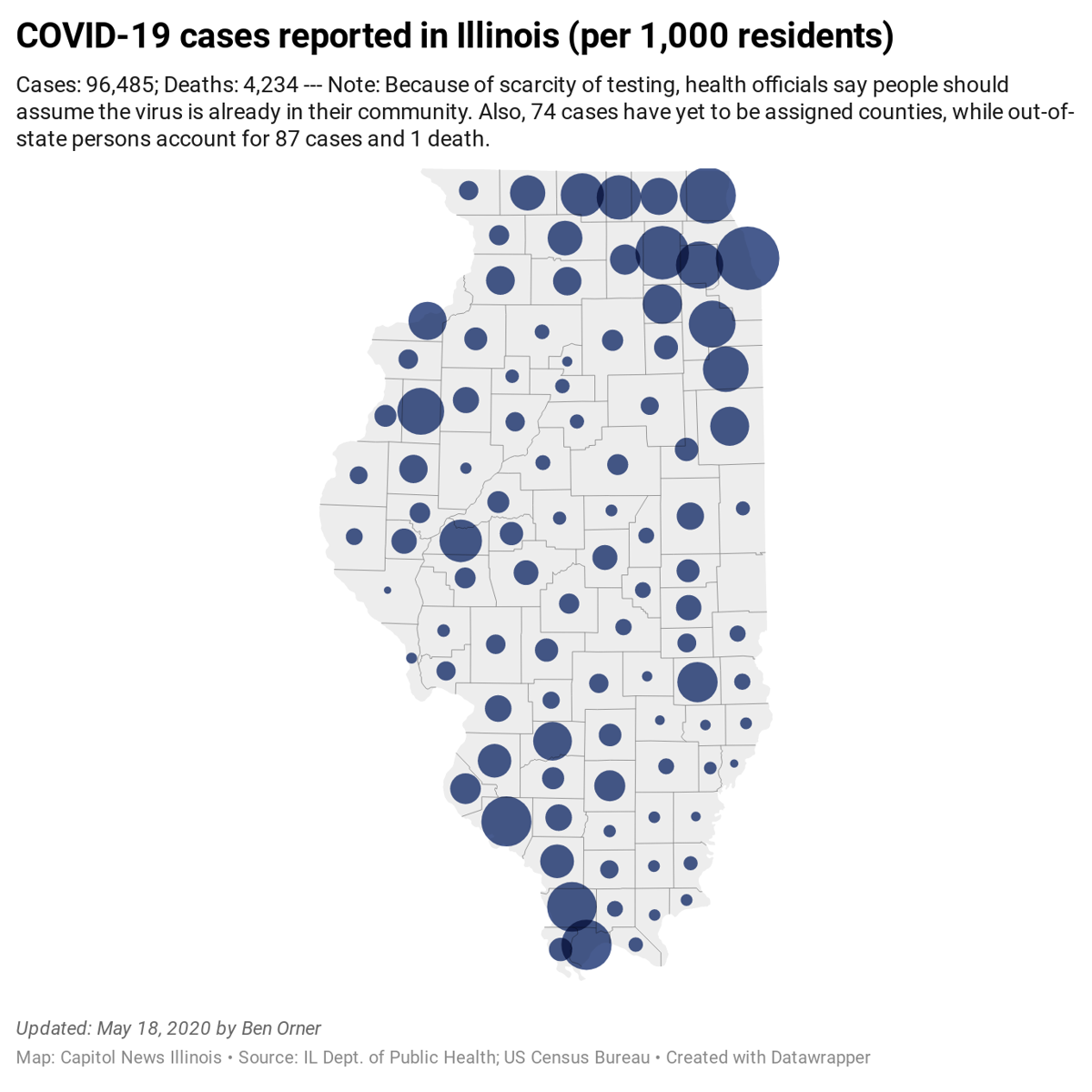 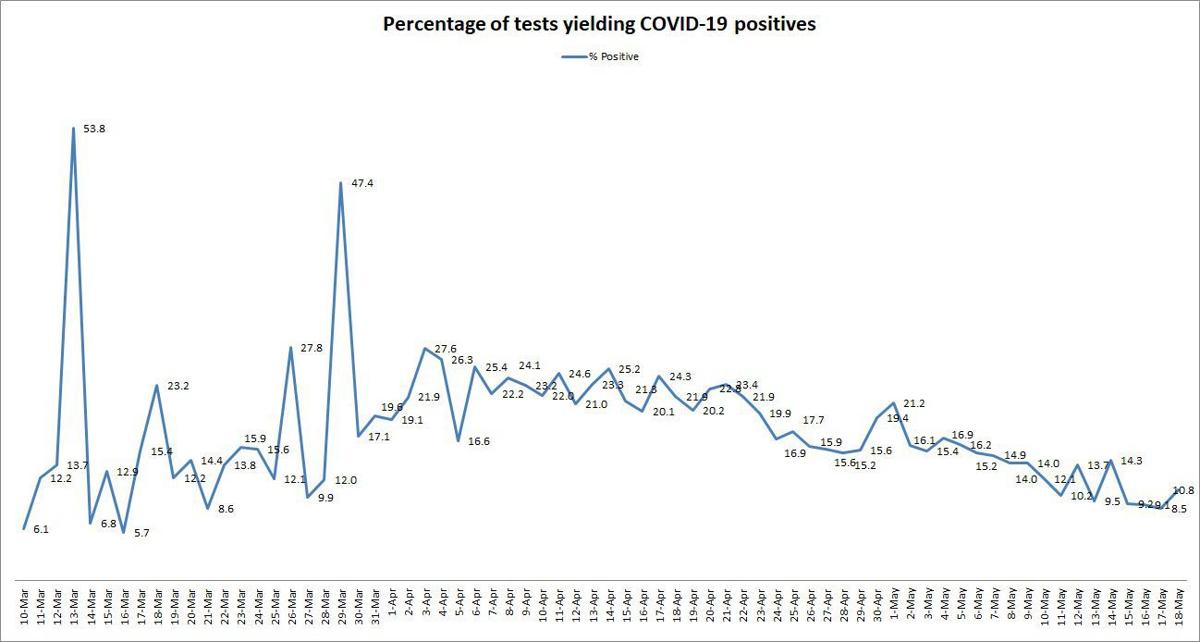 The percentage of COVID-19 tests with positive results daily in Illinois from March 10 to May 18. Data from the Illinois Department of Public Health.

The graphic shows the state’s hospital bed capacity over time from the beginning of April to May 17. Data from Illinois Department of Public Health.

The graphic shows the state’s intensive care unit bed capacity over time from the beginning of April to May 17. Data from Illinois Department of Public Health. 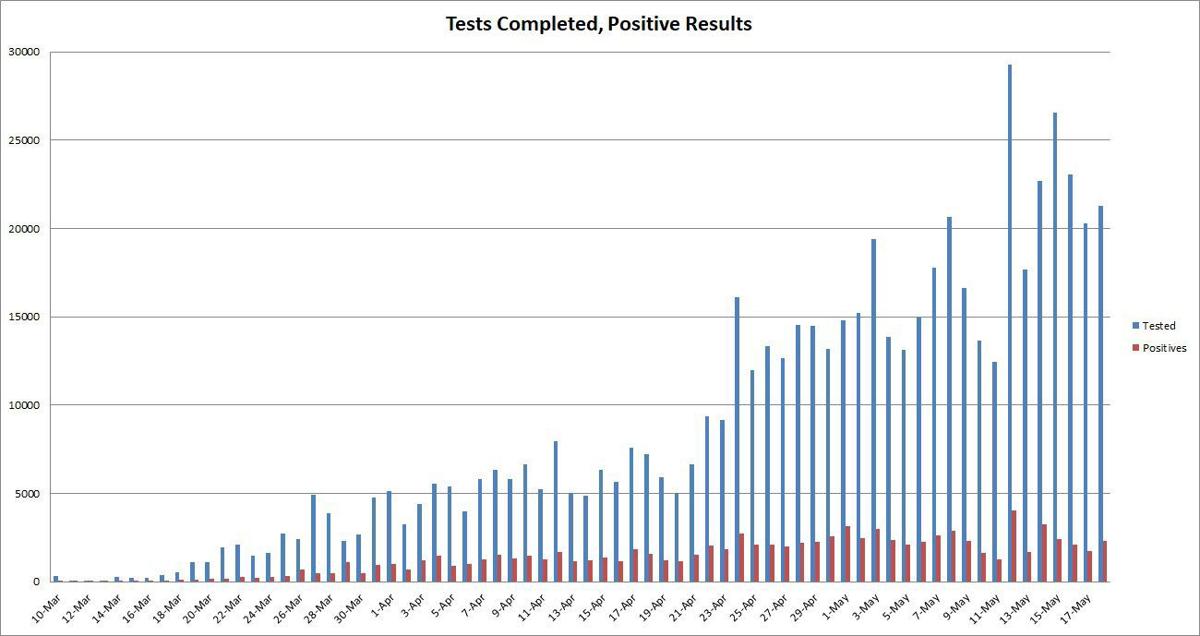 The number of COVID-19 tests and the number of positive results daily in Illinois from March 10 to May 18. Data from the Illinois Department of Public Health.

The graphic shows the state’s ventilator capacity over time from the beginning of April to May 17. Data from Illinois Department of Public Health.