SPRINGFIELD — Gov. J.B. Pritzker said Tuesday he would consider withholding federal pass-through funds to counties ignoring his stay-at-home order and said it “would be best” for the General Assembly to meet before the end of May to take up key state business.

When asked in his daily COVID-19 briefing via videoconference Tuesday if the state would consider withholding federal aid to counties reopening early, Pritzker said, “we would consider that.”

“The state already provides a lot of support for cities and counties,” he said. “And so I would just suggest that there are a number of enforcement mechanisms that are available to us, and I don't want to utilize those — I have asked people to do the right thing and I want to point out that the vast majority of people in Illinois have been doing the right thing and I'm so very proud of that.”

Pritzker said those disobeying his orders are “outliers” who are “not following science and data,” but rather they are “listening to partisan rhetoric” and “following their own instincts, but no science.”

The governor’s comments came one day after Republican leaders in the Illinois House and Senate sent him a joint letter urging him to revise his reopening plan and call a special session to “further discuss and develop the necessary adjustments to your plan that protects the public's health while at the same time moves our economy forward more quickly.”

“Last week, you unveiled your Restore Illinois plan that we believe is far too restrictive to those businesses struggling to stay afloat economically during this crisis. Furthermore, the parameters your plan puts in place in determining when a region can move between phases will only cause further economic hardship to small businesses and our state,” House Minority Leader Jim Durkin, R-Western Springs, and Senate Minority Leader Bill Brady, R-Bloomington, said in the letter Monday.

Per Pritzker’s plan, the state is divided into four regions, and the earliest any region can move to the next phase of reopening is May 29.

The governor on Tuesday said he has spoken to all four of the legislative leaders about returning to session. He did not say he would call a special session, however, stating that if he did, it “does not mean they will all show up.”

“They have to have confidence in the plan for showing up,” Pritzker said. “And that means that the leadership, both Republican and Democratic, need to agree to a plan has been, you know, reviewed by the Department of Public Health.”

Still, Pritzker said, the Legislature “must convene so that we can begin to put our financial and economic house back in order, even as we battle this terrible virus. The General Assembly needs to pass a comprehensive plan to support families, small businesses and small towns.”

He added the size of such an aid package would be “dependent upon whether or not we are able to get relief from the federal government” for lost revenues such as sales and income taxes.

“I think it would be best if they could get together before the end of May, so that we can get the very necessary things done like our budget,” he said.

Pritzker said the Illinois Department of Public Health released guidelines for a return to session. They include an exclusion of the public and lobbyists while allowing for lawmakers and staff, increased sanitization of surfaces and temperature checks at the door. Everyone should remain six feet apart, and only the necessary number of lawmakers to reach a quorum should be on the floor at any one time.

Committees should be conducted by phone or videoconference, per the guidelines. After the session, lawmakers and staff should isolate for seven days.

The guidelines also urge those 65 and older, as well as those with underlying health conditions, not to travel to Springfield. Many lawmakers, including 78-year-old Democratic House Speaker Michael Madigan of Chicago, fall into that upper age bracket.

A spokesperson for Madigan’s office said there are no new updates Tuesday to a statement the speaker made last week in which he said the safety of members, staff and the general public will be paramount in any decision.

“While I am eager to see a return to normalcy, we are talking about people’s lives, and any plan for a return to Springfield must have the health and safety of all those involved as a top priority, including the communities the members represent,” Madigan said last week.

“Like the governor, the Senate is eager to provide relief for families and small businesses hit by this pandemic,” Patterson said in an email. “We are reviewing recommendations for action as the Senate President wants to make sure senators return to a crystal clear legislative agenda and a plan to minimize the health and safety risks to everyone working at the Capitol.”

The Illinois Department of Public Health announced 4,014 new cases Tuesday — by far the most in one day — but it coincided with 29,266 test results reported in the past 24 hours — also a record. The 13.7 percent positivity rate was a little bit lower than the average of the past 10 days.

There were also another 144 virus-related deaths reported in the last 24 hours, bringing total fatalities to 3,601, while confirmed cases sit at 83,021 among 471,691 tested since the beginning of the outbreak.

While the state counts deceased who test positive for the virus as COVID-19-related deaths, it tries to remove deaths that are clearly not caused by the virus from the official count, she said.

“So if there was a gunshot wound, an acute gunshot wound, if there was a motor vehicle accident, we know that that was not related to the COVID-positive status,” she said. “But in the case where someone was elderly or battling cancer, it is obviously less clear that the COVID-19 disease associated with the coronavirus didn't actually play a part in hastening the death so those deaths do stand.”

Hospitalization numbers have remained relatively flat statewide as well, Ezike reported, with 4,626 hospital beds in use by COVID-19 patients, 1,215 of which were ICU beds. There were 730 COVID-19 patients on ventilators as of midnight as well.

A Carterville police officer has tested positive for COVID-19, according to a Tuesday statement from Mayor Brad Robinson. 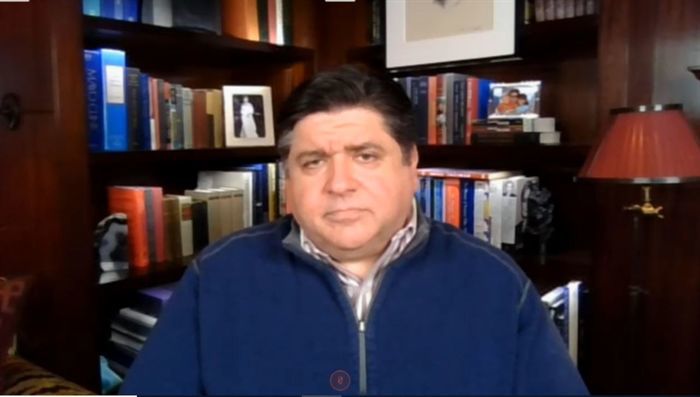 Gov. J.B. Pritzker answers questions at a videoconference Tuesday. Pritzker said a legislative session should happen by the end of May and said he would consider withholding federal pass-thru funds for counties disobeying his stay-at-home order. 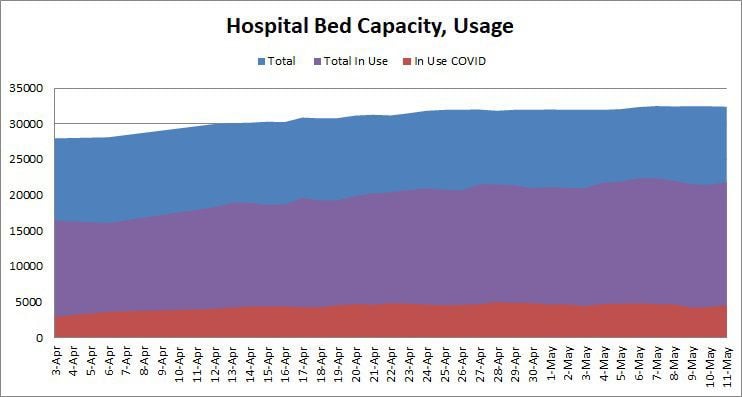 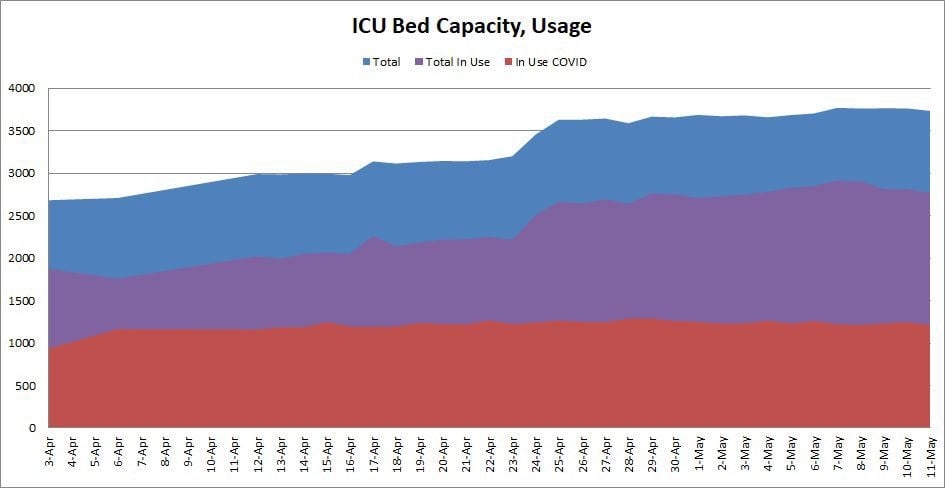 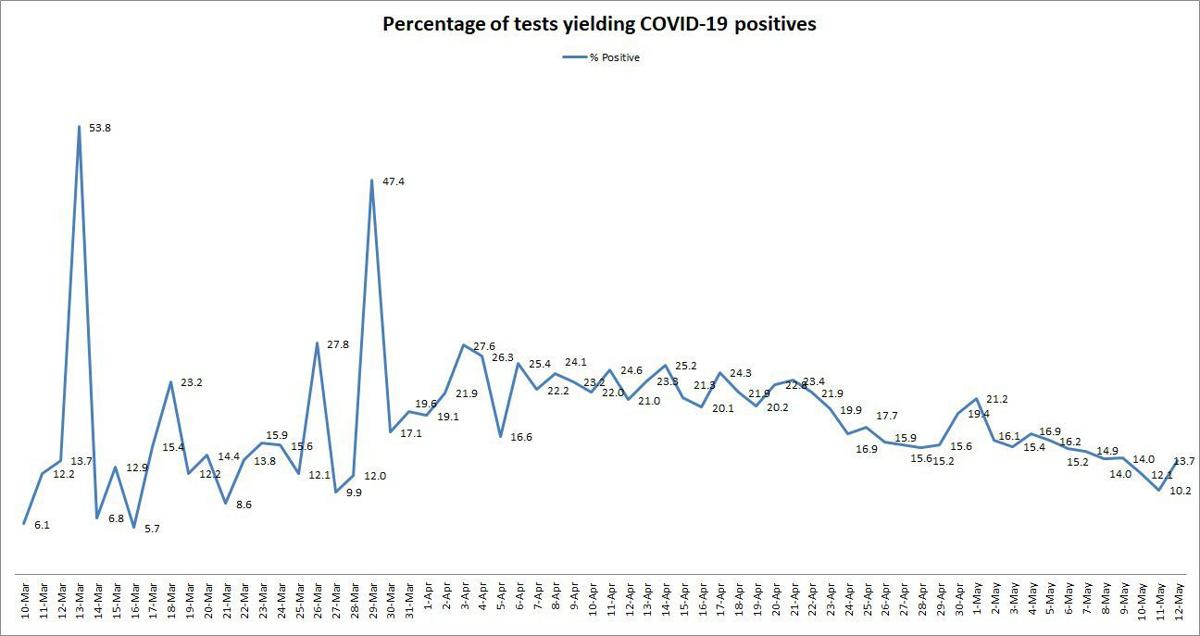 Percentage of tests to come back positive each day. 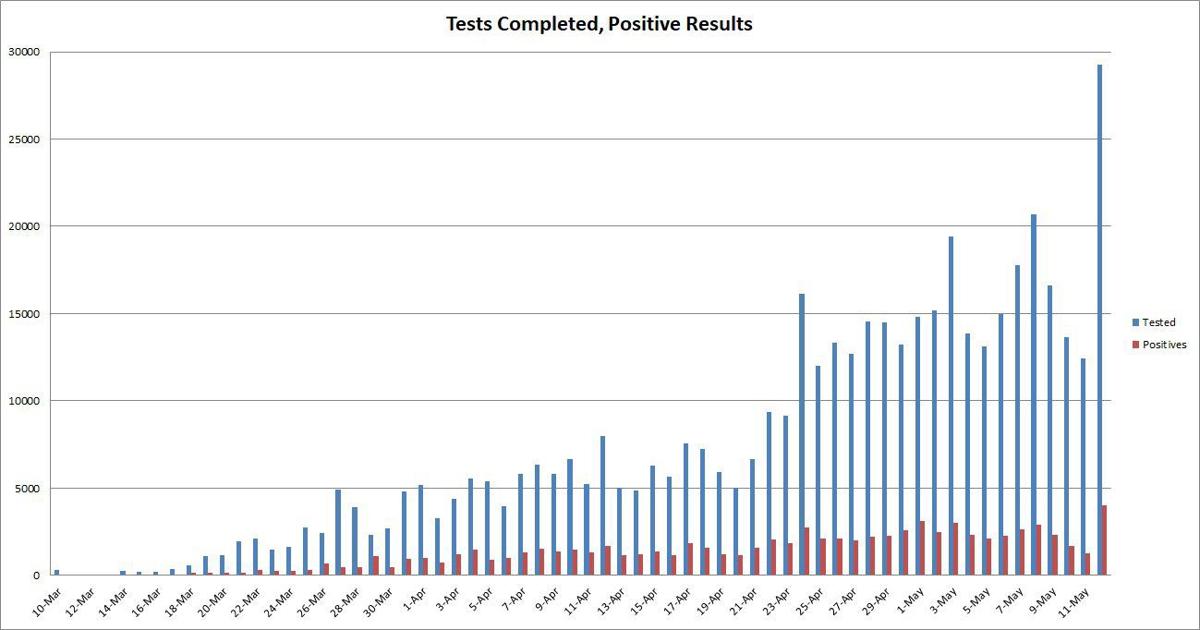 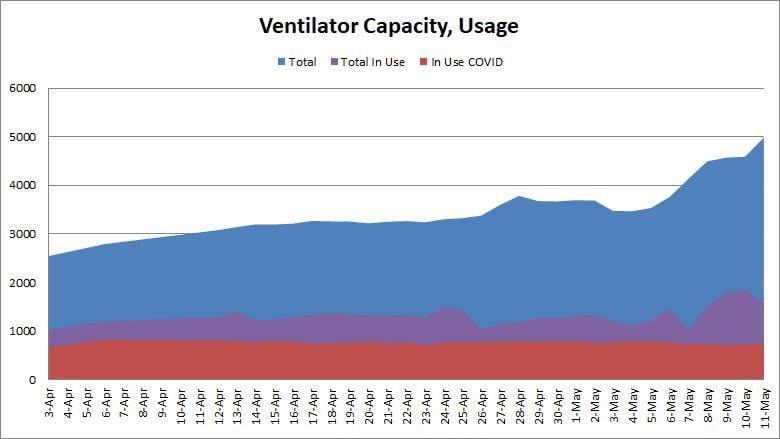