SPRINGFIELD — Gov. J.B. Pritzker on Thursday traveled to two of the four counties in Illinois that are now in danger of having to reimpose economic restrictions because of rising COVID-19 numbers, warning that bars, restaurants and other businesses could be forced to close again if people don’t follow public health guidelines.

“As much as I'd like to, this virus isn't something that we can wish away,” Pritzker said at an event in Peoria. “So, we have to act responsibly and collectively to protect the people that we love.”

All 102 counties in Illinois are currently in Phase 4 of the reopening plan, which means businesses are allowed to operate within public health guidelines such as capacity limits and face mask requirements and gatherings of up to 50 people are allowed.

Individual regions, however, can be forced to reimpose several restrictions seen in previous phases of the reopening plan if they show increasing positivity rates for seven out of 10 days and they have a seven-day sustained increase in hospital admissions for COVID-19 or a decrease to 20% capacity of intensive care unit beds.

The four counties currently in danger of reaching those metrics are Adams, LaSalle, Peoria and Randolph.

IDPH: Randolph County at 'warning level' for spread of COVID-19

Pritzker was joined at the Peoria event by local legislators, including Democratic Sen. David Koehler, who said he was alarmed by reports about public behavior that he’d received from two local businesses.

“Both of these establishments asked for patrons to wear masks when they come through the door,” he said. “They have reported that their employees have just been brutalized by some members of the public who think that it's, you know, their right not to wear a mask. But you have to understand that these are businesses that are trying to protect the public, trying to protect their employees, and they need our help.”

Speaking later in the day in Ottawa, in LaSalle County, Pritzker delivered a similar message.

Pritzker said the sources of the rising infection rates in Region 2 appear to be from shopping in big-box retail stores, house parties and workplaces.

If hospitalizations in the region continue to rise for four more days, Pritzker said, the region will see increased restrictions, which may be tailored locally around the sources of the increased spread.

Statewide, the Illinois Department of Public Health reported Thursday that it had confirmed 1,772 new cases of COVID-19 over the previous 24 hours, the highest single-day total since May 23, as well as 18 confirmed virus-related deaths. That brings the totals since the pandemic first hit Illinois to 176,896 cases and 7,478 deaths.

Those new cases came from 41,134 test results that were received over the day, for a single-day positivity rate of 4.3%, an increase of half a percentage point from the previous day. The state’s seven-day rolling average positivity rate held steady at 3.8%.

As of Wednesday night, 1,452 people in Illinois were hospitalized with COVID-19. Of those, 353 patients were in intensive care units, including 149 patients on ventilators.

Meanwhile, the U.S. Department of Labor reported numbers Thursday that show the pandemic is continuing to wreak havoc on the state and national economies.

More than 1.4 million Americans filed first-time unemployment claims during the week that ended Saturday, July 25, while nearly 16.9 million Americans were receiving continuing jobless benefits. Both of those numbers reflected increases from the previous week.

In Illinois, there were 32,465 new unemployment claims and 644,903 workers receiving continuing benefits, both slight decreases from the prior week but still at historically high levels.

Meanwhile, the Bureau of Economic Analysis, an agency within the Department of Labor, reported that the country’s gross domestic product, a general measure of the size of the economy, shrank during the second quarter at an annual rate of 32.9 percent, the sharpest single-quarter contraction ever recorded.

State-level data will not be available until Oct. 2.

After a long night of counting votes, Jackson County elected a new state’s attorney and re-elected its coroner. 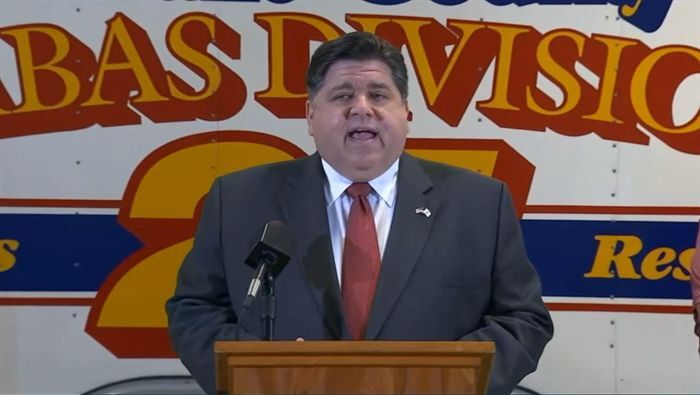 Gov. J.B. Pritzker speaks in Ottawa Thursday, warning that rising COVID-19 infection rates could force all of Region 2 in central Illinois to return to economic restrictions. 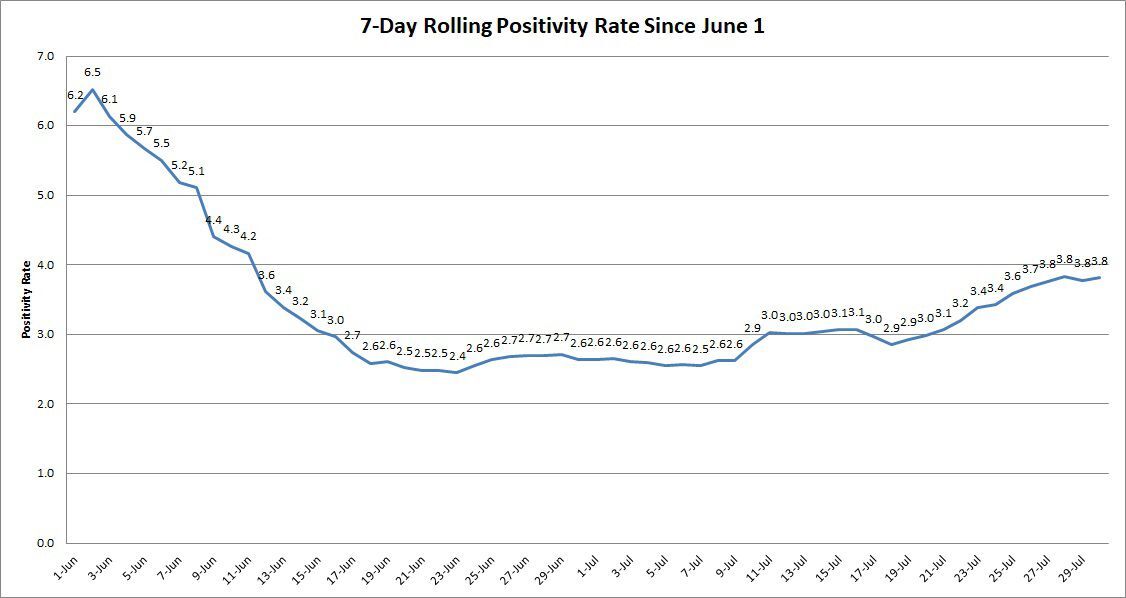 This graph shows the rolling, 7-day positivity rate for tests completed starting on June 1. Illinois Department of Public Health data was used to calculate the averages.