SPRINGFIELD — A major expansion of voting access for the 2020 general election is headed to the desk of Gov. J.B. Pritzker after the Illinois Senate overwhelmingly passed the measure Friday.

After more than an hour of floor debate, the upper chamber passed Senate Bill 1863 by a 37-19 party-line vote. Three Democrats — Jacqueline Collins, of Chicago, Robert Martwick, of Chicago, and Pat McGuire, of Crest Hill — did not vote. The bill, which Pritzker has said he supports, expands mail-in voting for the Nov. 3 general election in anticipation of social distancing and other restrictions related to the COVID-19 pandemic that will make in-person voting more challenging.

The bill requires Illinois’ local election offices, by Aug. 1, to mail or email vote-by-mail ballot applications to any voter who cast a ballot in 2018, 2019 or 2020, as well as voters who registered or changed addresses after the March primary.

Bill proponents estimate 4.8 million people will receive applications. The bill also states that by Sept. 15, the secretary of state must send a notice to people who received an application but have not yet returned it.

Completed ballots would be returned via mail or in new “collection sites,” that would consist of boxes placed in locations at the discretion of local election officials.

As for voting in person, the bill would allow local election authorities to implement curbside voting, in which voters can drive up, be handed a ballot and fill it out in their cars.

SB 1863 also expands the existing Election Day to a state holiday for state employees to include public schools and universities, but only for the 2020 election.

The collection site and curbside provisions are optional for local clerks. They would also have the option to facilitate early-voting hours for people with certain health conditions.

Among the issues that Republican senators raised to state Sen. Julie Morrison D-Lake Forest, the bill’s lead Senate sponsor, were costs, input from county clerks, the security of collection sites and ballot applications being sent automatically and in some cases by email.

State Sen. Paul Schimpf, R-Waterloo, took issue with a provision that allows citizens as young as 16 to be election judges. Morrison said that is to make up for an expected decrease in elderly judges, many of whom did not show up during the March primary because of safety concerns.

“We lost a great number of experienced election judges who are retired and older people who quite simply have a great deal of hesitation now in performing those election duties that they’ve enjoyed for so many years,” Morrison said. She added it is also an “excellent way for us to engage the younger generation in our government.”

Schimpf also argued the bill creates a system with “significant” costs that are unnecessary given that Illinois already allows any citizen to vote by mail. He added it would also place a “significant burden” on local election authorities, whom he also argued have not been able to offer enough input.

The Illinois State Board of Elections filed a fiscal note saying that if the bill’s provisions are fully implemented by every local election authority, it would eat up every dollar of the more than $16.7 million the state will receive from the federal CARES Act for elections.

House sponsor Rep. Kelly Burke, D-Evergreen Park, however, said during floor debate on Thursday that ISBE’s estimate is “extremely generous” because she does not expect every election office to implement every provision.

Voting on legislation has been different for the Senate during this week’s special session as lawmakers practice social distancing. Senators have had to come to the floor in groups of 10 to vote, a process that takes slightly longer.

Pritzker threw his support behind SB 1863 on Thursday, saying during his daily briefing that it balances voting access with available resources.

“I’m very much in favor of making sure that everybody gets a ballot who is eligible to vote and then returns that ballot,” he said.

The measure passed the House of Representatives 72-43 on Thursday evening after a nearly three-hour debate that featured Republicans grilling Burke. Multiple GOP representatives expressed their concerns over the collection box system, for example, which Rep. Lindsay Parkhurst, R-Kankakee, argued could lead to voter fraud.

To address security concerns related to the optional collection sites, Senators passed House Bill 2238 on Friday before debating SB 1863. That trailer bill would, among other things, require collection boxes to be locked and opened only by election authorities. It also requires ISBE to establish additional guidelines.

The trailer bill will need to be passed by the House in order to go to the governor’s desk.

SB 1863 applies to only this November’s general election.

Pritzker noted that the positivity rate has held steady or declined in all but two regions of Illinois over the past two weeks. The statewide positivity rate stood at 3.7 percent as of Wednesday.

Illinois plans to continue withholding federal payroll taxes on behalf of its 62,000 employees despite a program President Trump launched in August that allows workers to defer paying those taxes through the end of the year.

State agency heads are preparing to cut 5% of their budgets in the current fiscal year and 10% next fiscal year should the federal government fail to provide aid to state and local governments.

Illinois among last states to apply, be approved for added $300 unemployment benefit

Gov. J.B. Pritzker announced Monday he instructed the Illinois Department of Employment Security to submit an application “despite serious concerns about the unfairness” of the program.

Law students work to register voters at events in Carbondale

Here's what you need to know about registering to vote in the Nov. 3 election.

The decision appeared to do nothing to break the partisan tension that has separated the Special Investigating Committee’s Democratic chairman and the panel’s ranking Republican.

The Democratic chairman and ranking Republican on a special legislative committee investigating Michael Madigan both said Tuesday that they are awaiting further guidance from federal prosecutors. 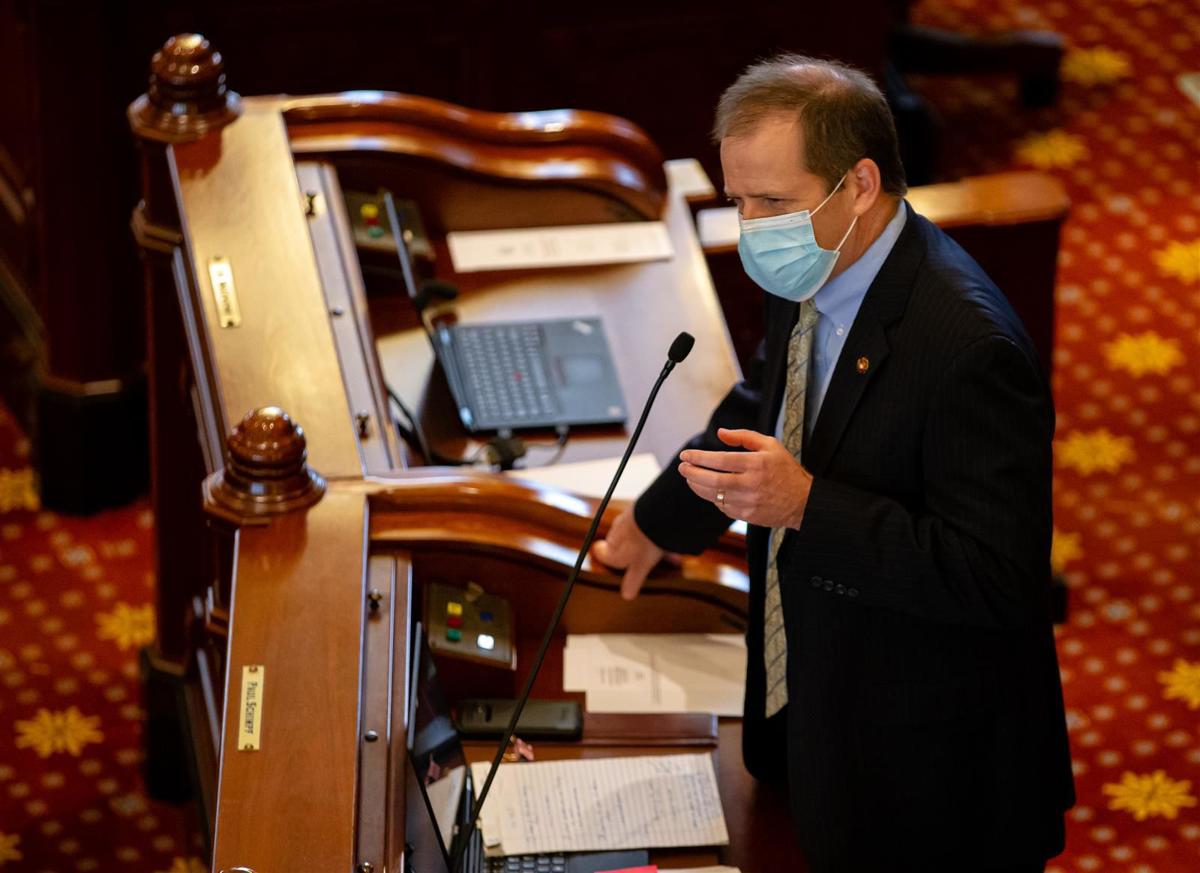 Sen. Paul Schimpf, R-Waterloo, asks questions of Sen. Julie Morrison, D-Lake Forest, during debate on SB1863, a bill dealing with voting by mail and other changes for the 2020 election, on the floor of the Illinois Senate during session Friday at the Illinois State Capitol in Springfield. 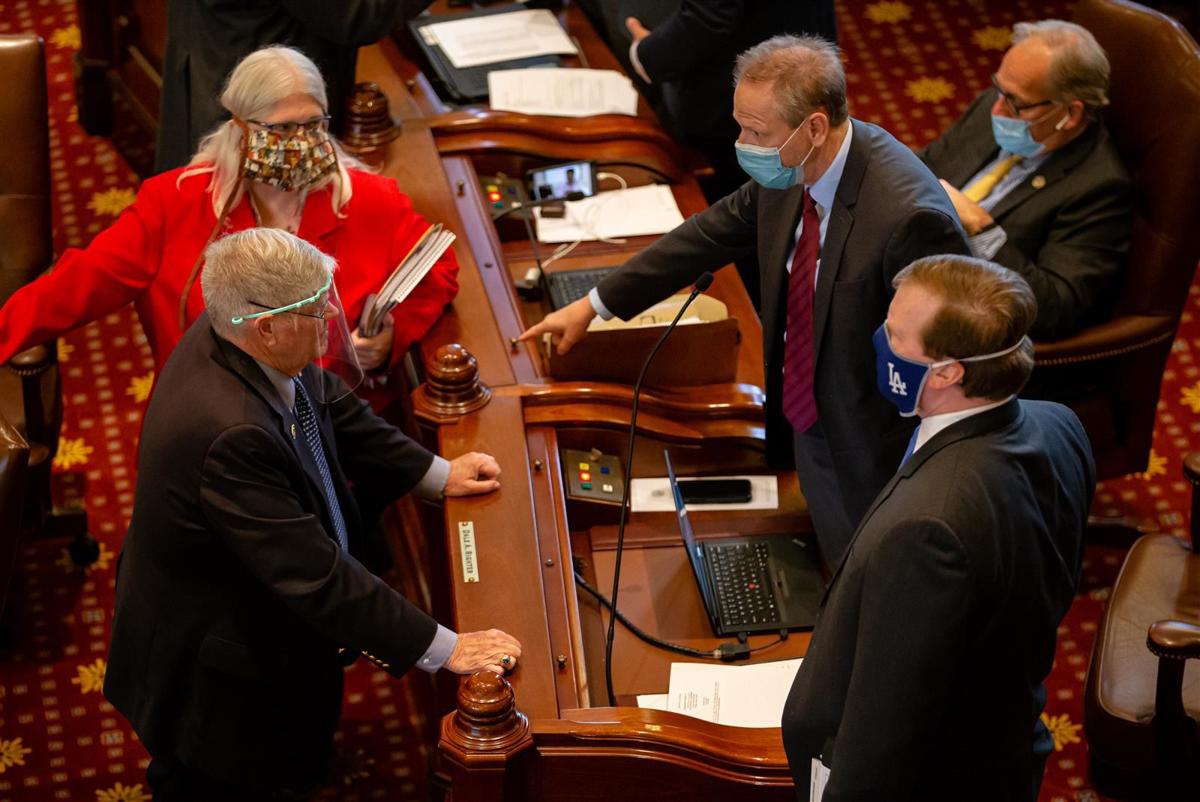 Sen. Dale Righter, R-Mattoon, talks with Sen. Jim Oberweis, R-Sugar Grove, during debate on SB1863, a bill dealing with voting by mail and other changes for the 2020 election, on the floor of the Illinois Senate during session Friday at the Illinois State Capitol in Springfield.