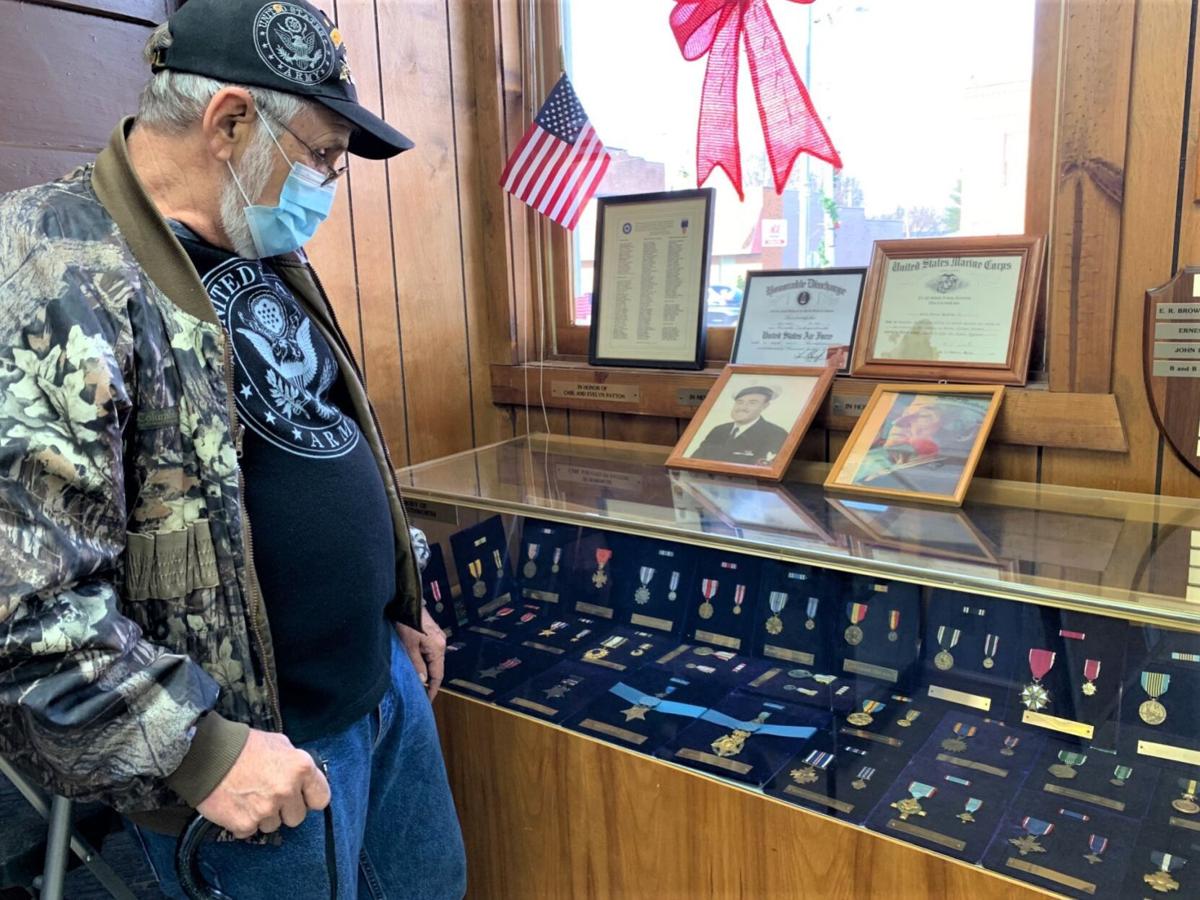 Veterans Depot Museum volunteer Danny Loeh looks over a display case of Medals of Honor dating from World War I to the Korean War. 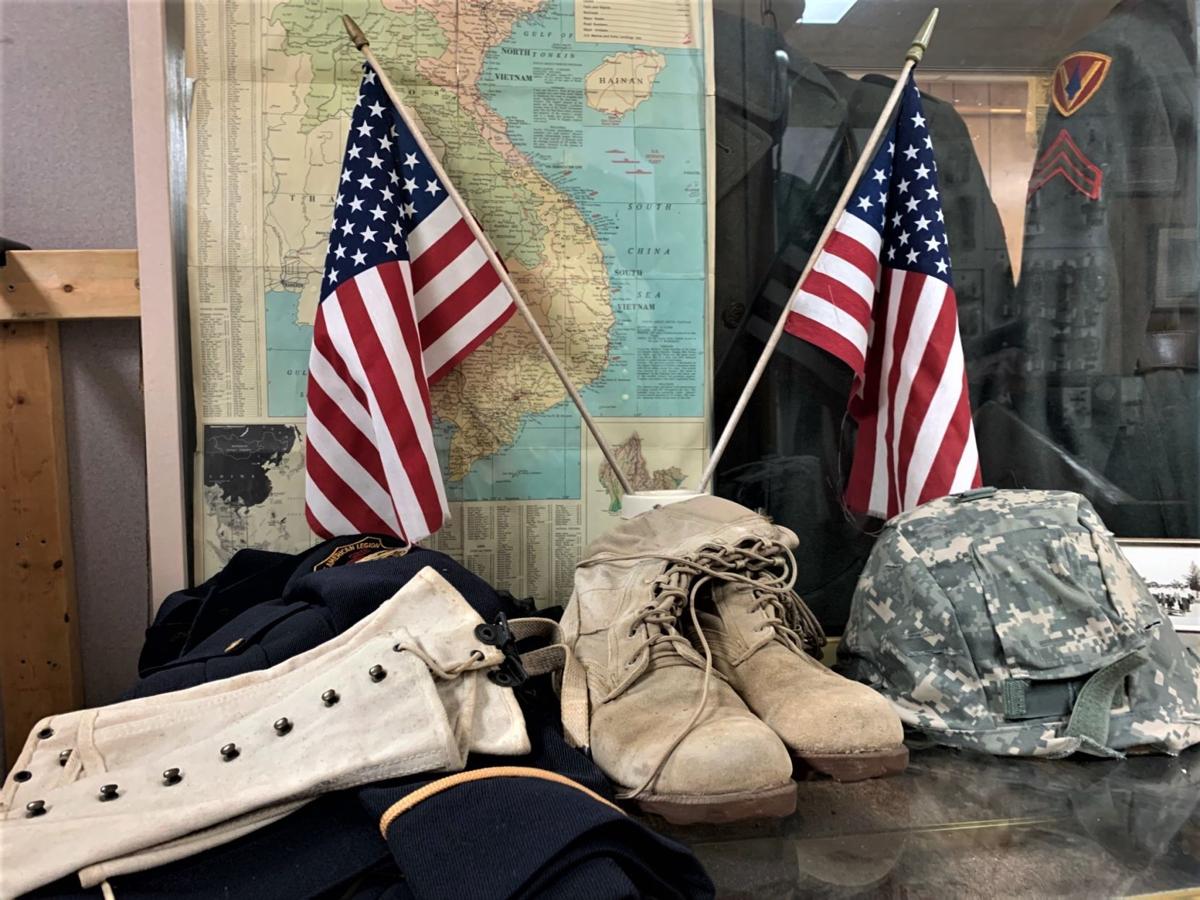 The Veterans Depot Museum opened in West Frankfort in 1989. Volunteers are currently working to inventory its collection and improve the space. 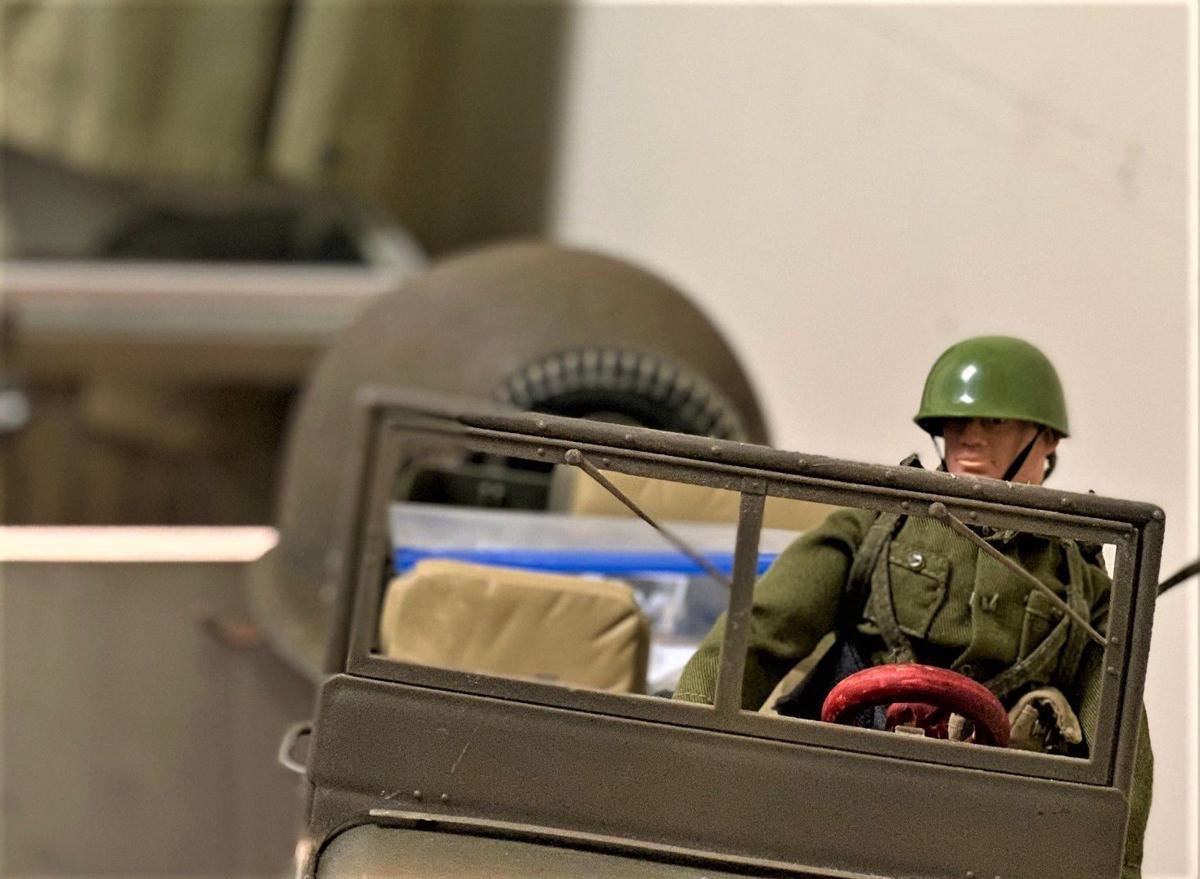 Volunteers hope their remodel of the Veterans Depot Museum in West Frankfort draws more visitors once the pandemic comes to an end.

WEST FRANKFORT — In this Franklin County town sits an unassuming museum packed with memorabilia from the region’s men and women who served their country in conflicts dating back to the Civil War.

It is located inside an old train depot off Main Street, a few feet from the tracks that once hauled commuters and loads of coal mined from the county’s belly to places across the nation.

The tracks still serve freight cars, but the depot has been out of service as a commuter hub for many years. In the 1980s, citizens transformed it into a museum to honor the region’s servicemembers.

It offers the perfect salute to their contributions — and the town’s historical significance at the crossroads of America.

Many of Franklin County’s citizens called to serve in foreign wars were the same men who toiled in dangerous conditions in underground mines back home to help fuel the nation’s growth.

Of note, a significant number of the 119 men who died in the Orient 2 Mine explosion just days before Christmas in 1951 were veterans, said Jack McReynolds, a volunteer with the Veterans Depot Museum.

Last week, McReynolds and fellow volunteer Danny Loeh gave a reporter from The Southern a tour of the museum.

They want the public to know about their plans to spruce it up and better categorize the hundreds of artifacts housed under its roof so that they are preserved for future generations.

The museum volunteers are taking advantage of down time during the COVID-19 pandemic to get the job done. And they’re hoping that, once the pandemic ends, their efforts will result in more visitors coming through the doors.

Loeh said the goal is to have the remodel and inventory project completed this winter.

It’s a huge undertaking. The basement is jammed full of personal effects that have been donated to the museum over the decades, often given by family upon the passing of a local veteran. They don’t want to see these pieces lost to time alongside the people who still have some connection to their historical significance.

For the publicly accessible main floor, they’ve purchased several used display cases. And they’ve been rearranging items to make the walk-through a more memorable experience. “We’re getting it straightened up,” McReynolds said. In the meantime, Loeh said he’s reached out to area high school teachers in hopes they will consider taking their students on field trips here when it’s safe to gather in crowds again.

What’s on display now is an impressive collection of items dating back more than 150 years. There’s a shawl from the Civil War era, an old McClellan Army saddle from World War I, dozens of newspaper clippings and military patches, a display case of Medals of Honor dating from World War I to the Korean War, a large collection of World War II radios and a hand grenade found on Normandy Beach, to name only a few items in the vast collection.

There are numerous photos of those who served throughout the museum, such as the late George Michalic, a Pearl Harbor survivor who was on a ship anchored next to the USS Arizona when she went down during the surprise Japanese attack on Dec. 7, 1941. His son, Mark Michalic, later went on to play a key role in capturing Oklahoma City bomber Timothy McVeigh after he blew up a federal building there in 1995.

These are the types of stories that Loeh and McReynolds hope to pass along to West Frankfort’s younger generations.

The museum first opened in 1989. Loeh and McReynolds said they’re grateful for the volunteers who came before them to make it happen. At one time, the old depot — built in 1921 — was destined for the wrecking ball. Citizens united to save it, as it has rich historical meaning for many in the county. President Harry Truman even made a stop here while riding a commuter rail car through town in 1948.

“He gave a speech right out front here,” McReynolds said. “I was in high school and I was standing right across the street.”

The late Evelyn Patton, a community-minded citizen of West Frankfort, is credited with helping raise money to restore the depot in the 1980s. The museum project, Loeh and McReynolds said, was also helped along by several World War I veterans active in the American Legion post in Frankfort Heights. They were a group of men known unofficially as the “Last Man Alive Club,” McReynolds said.

They had a pact that the last man to survive from their bunch would have the honor of drinking a bottle of cognac they had purchased in France and brought home from the war. When that man died at 93, “he couldn’t do it,” McReynolds said of the legend. “It was too strong. But he had a little sip of it.”

Not everyone from Franklin County who fought in America’s wars were able to come home. The names of those who died in combat are etched in stone monuments outside the building. The last name added was of a young West Frankfort man, Matthew J. Vosbein, who was killed by a roadside bomb in Iraq in 2006.

Loeh said he dedicates so much time to this project because he wants people to remember the sacrifices that have been made for the nation by people right here at home.

Photos: A look at life in Southern Illinois during 2020

Veterans Depot Museum volunteer Danny Loeh looks over a display case of Medals of Honor dating from World War I to the Korean War. 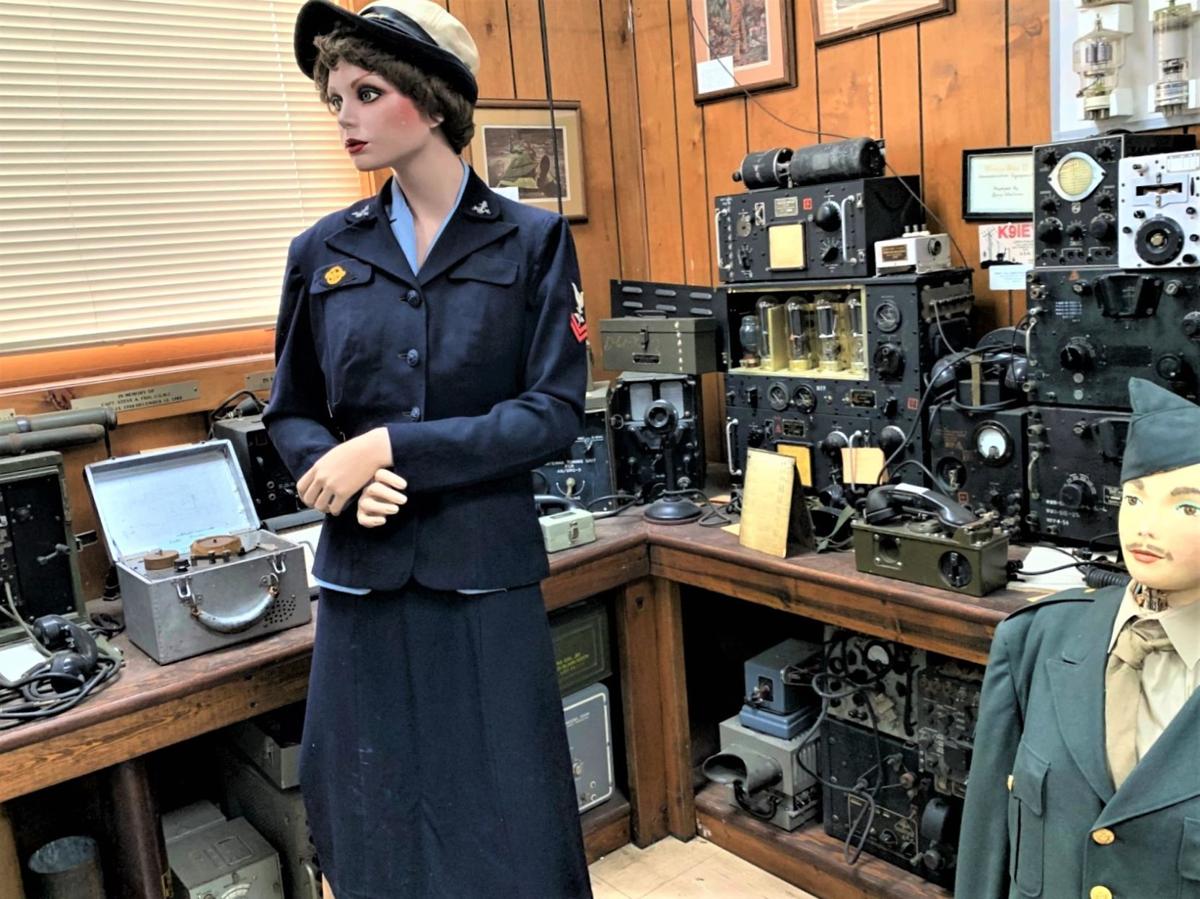 Numerous World War II radios are on display in a wing of the Veterans Depot Museum in West Frankfort. 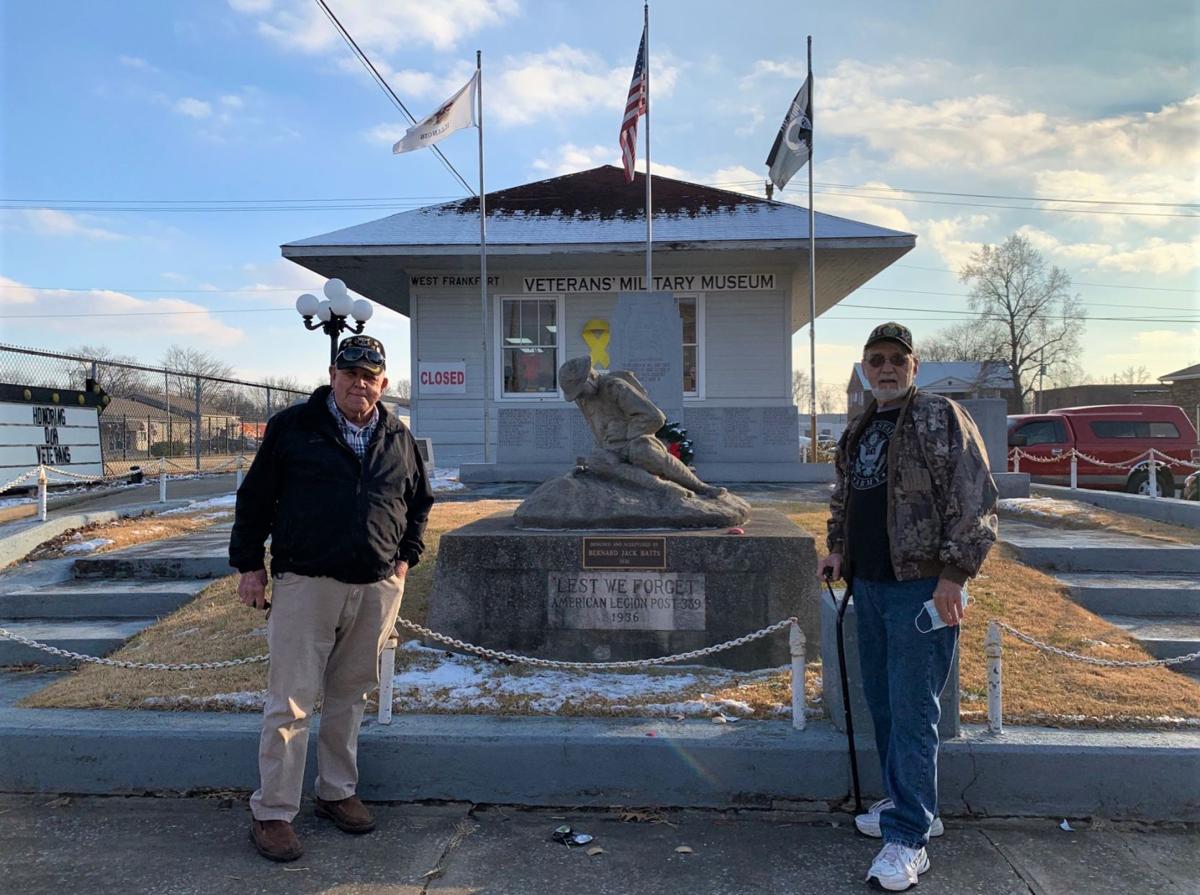 Veterans Depot Museum volunteers Jack McReynolds (left) and Danny Loeh pose for a picture in front of the building that sits just off main street in West Frankfort. 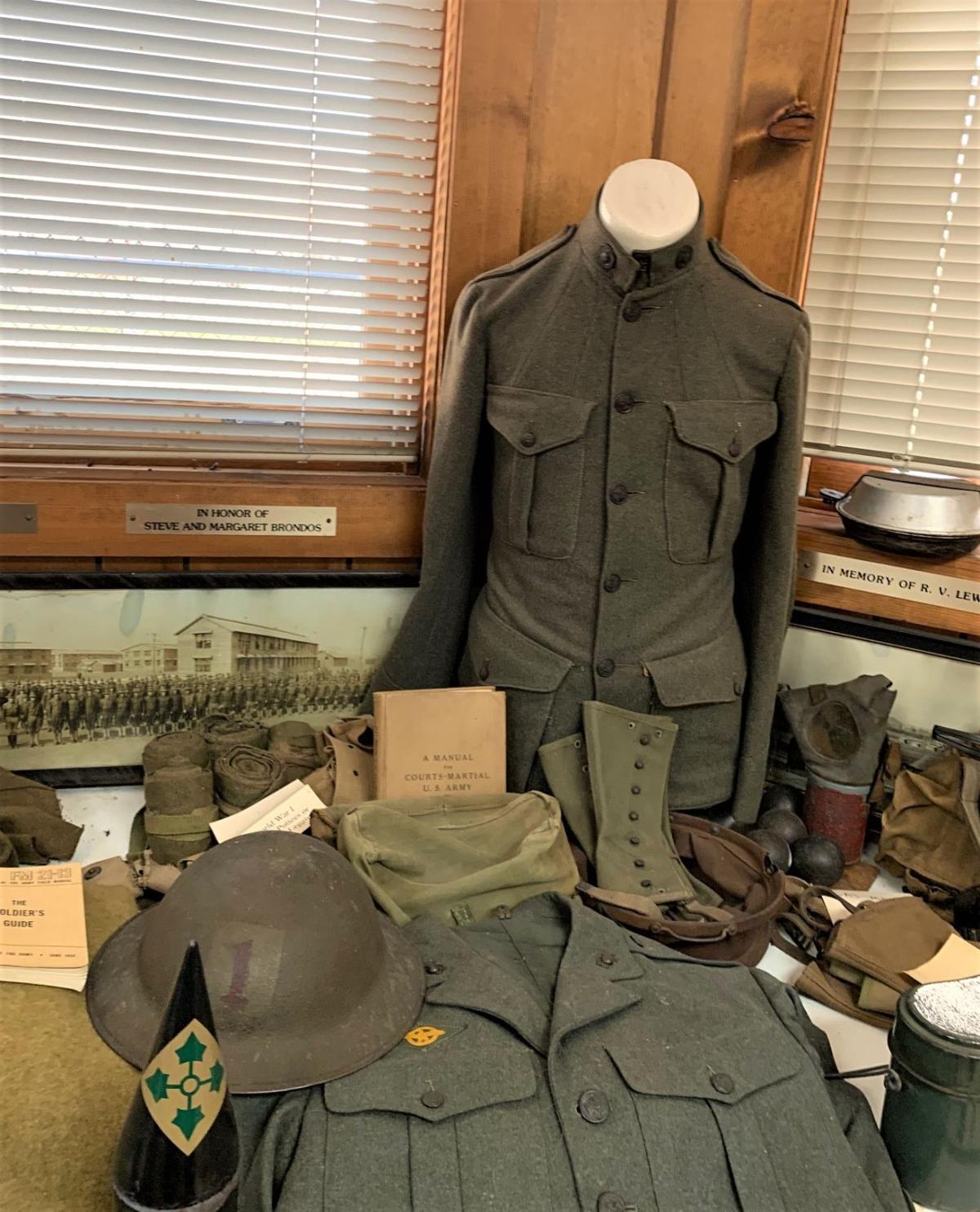 The Veterans Depot Museum in West Frankfort houses hundreds of artifacts that once belonged to area servicemembers.

The Veterans Depot Museum opened in West Frankfort in 1989. Volunteers are currently working to inventory its collection and improve the space.

Volunteers hope their remodel of the Veterans Depot Museum in West Frankfort draws more visitors once the pandemic comes to an end.