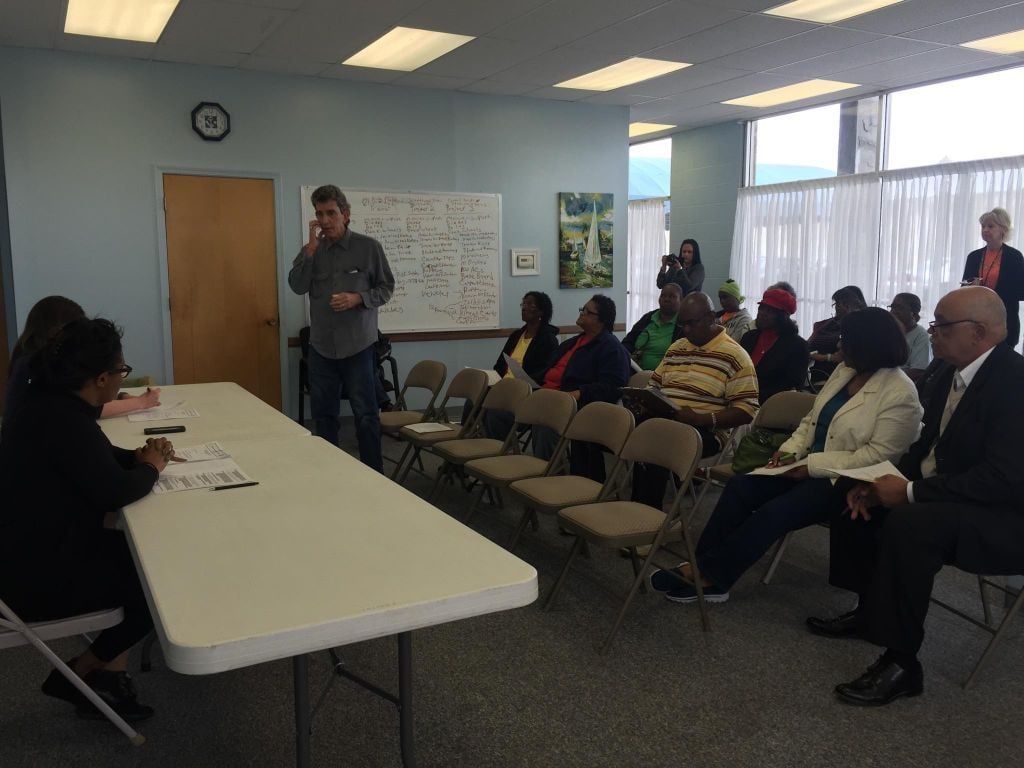 The Alexander County Housing Authority Board met Wednesday afternoon, its first meeting since a federal takeover of the organization. 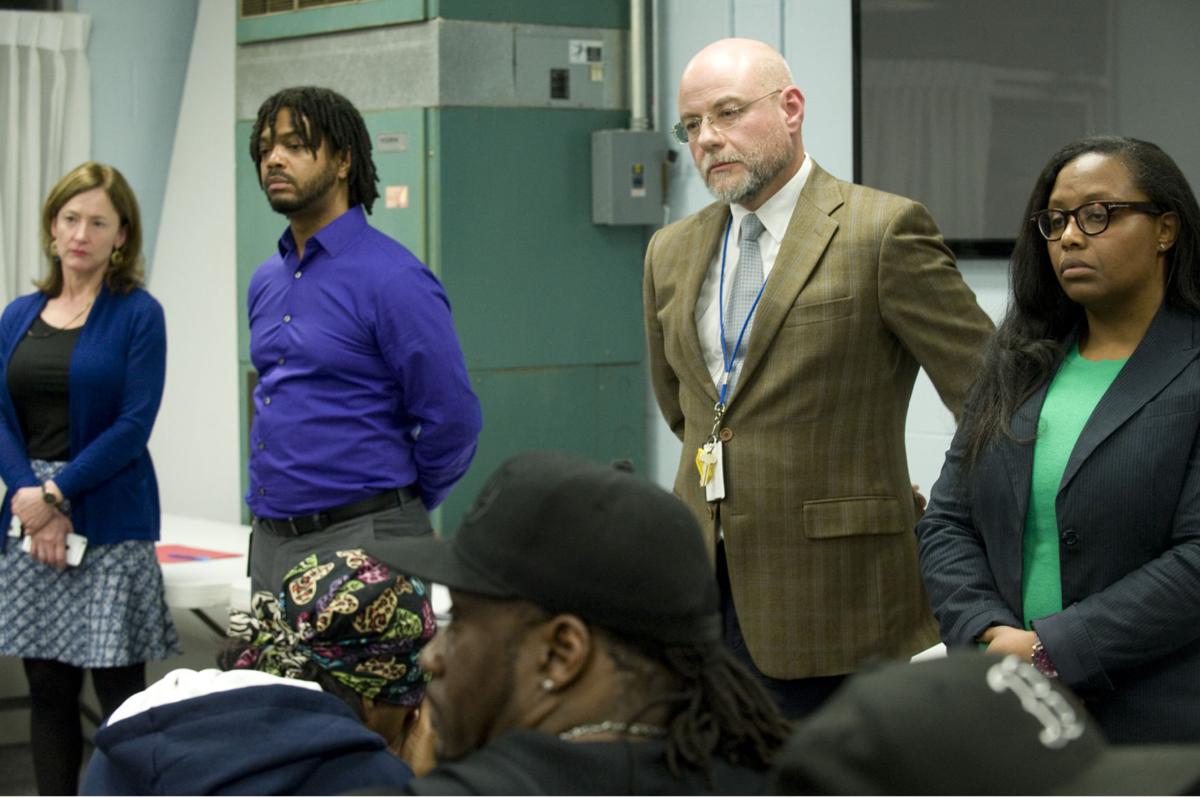 The new HUD managers of Alexander Housing Authority (ACHA) met with residents at the authority headquarters on Feb. 23 in Cairo.

CAIRO — The Alexander County Housing Authority Board, in a brief meeting on Wednesday afternoon, its first since a federal takeover, approved issuing a $380,000 contract to a Marion-based company to begin structural repairs on the outside of the Connell F. Smith, Sr., apartment complex in Cairo.

Pieces of concrete have been falling from the building's exterior, and the repairs were deemed a safety emergency, said Towanda Macon, an employee of the U.S. Department of Housing and Urban Development, who was named a co-administrator of the HUD Recovery Team assigned to Cairo. HUD took over on Feb. 22 citing years of mismanagement by local officials.

The contract for repairs was awarded to Evrard-Strang Construction.

In response to a question, Macon told guests at the meeting that work is also ongoing to improve conditions at other complexes, but this item required board action because the contract amount exceeded the no-bid $50,000 threshold outlined in the agency’s rules, she said.

Infestation control, another top priority identified by residents, was not addressed at the meeting. But afterward, Macon and Janet Harris, another member of the Recovery Team, said they have been working directly with tenants who have reported bed bug problems to provide for spraying in those units.

This has been ongoing for a few weeks while the agency is working to secure a more permanent contractual relationship with an extermination company that agrees to provide a holistic approach to battle all flying, crawling, stinging pests and their nests. That includes a tenant education component about things they can do to help with pest control, Harris said. 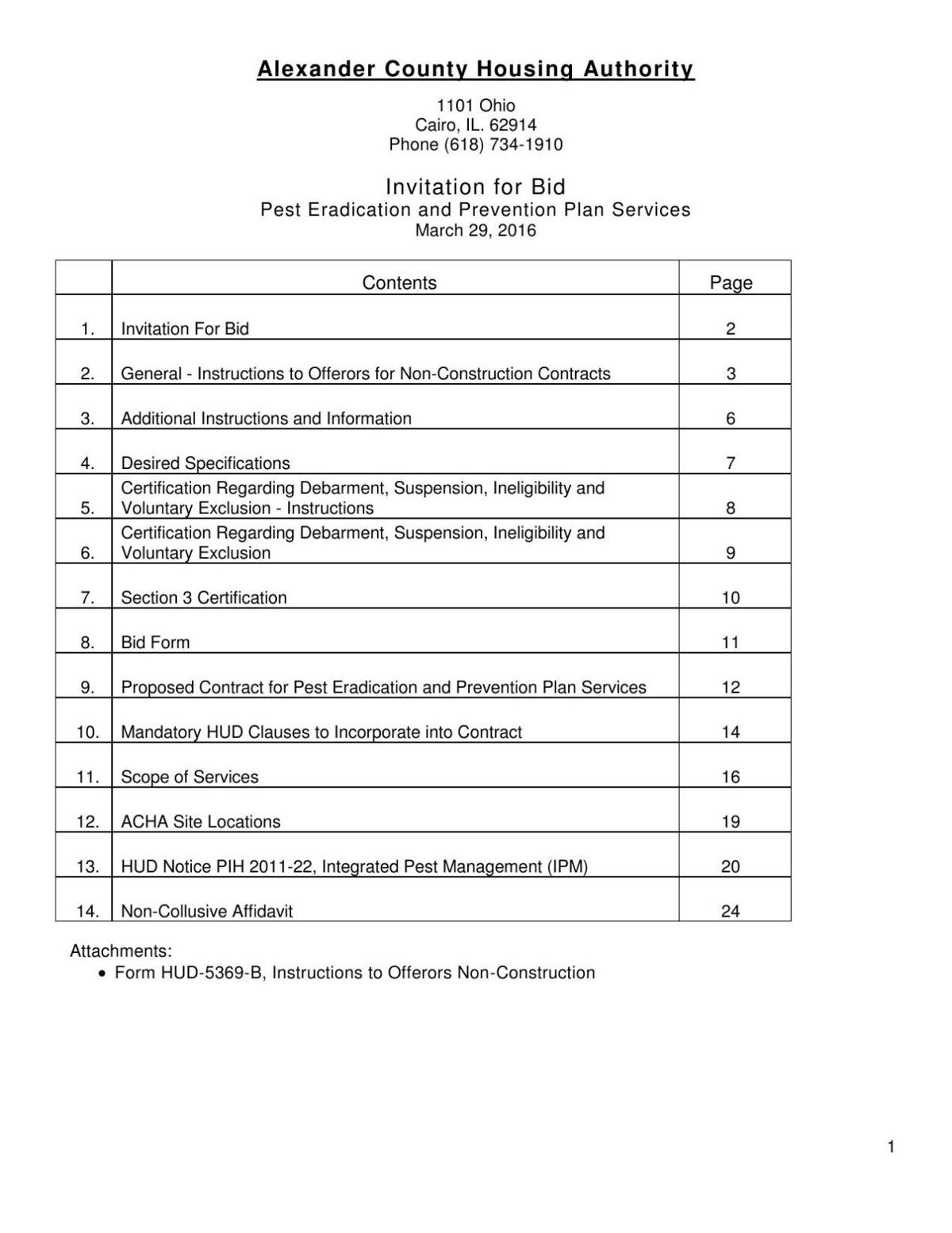 It has taken weeks to finalize a contract, Macon said, because the agency did not have proper procurement policies in place, and the housing authority’s well-documented management issues were causing some potential vendors concerns.

“The best answer I can give you is Alexander County Housing Authority does not have the best reputation,” she said. “So, we are restoring the confidence with vendors and some of those may be outside of Alexander County. It’s not a short process.

“We want to make sure that whatever we do is in line with HUD’s procurement policies, and Alexander County’s policies. Because we know we only have one shot at this, so we have to get it right.”

Harris, who has taken the lead on this issue, said a request for proposals for pest eradication services went out Tuesday. Potential bidders are invited to view the property next Tuesday, and bids are due on April 12, she said.

Additionally, team member Stephanie Stone said tenants can expect the inner core of their door locks to be changed in April. Several residents have stated that master keys have fallen into the wrong hands. Stone said an order has been placed, and the cores of some 2,000 locks will be changed throughout the properties.

In addition to her role as co-administrator, Macon was named one of two board members for the agency under federal control. Though she was the only board member present on Wednesday, she stated that this was sufficient to establish a quorum under the guidelines of the takeover.

Paul Lambert, a longtime resident of Elmwood Place and president of a citizens’ housing advocacy group, thanked HUD officials for the work they have done so far, even as he said there’s much still to do. “In order to complete something, you’ve got to start. So you’ve started something,” he said.

Cairo Mayor Tyrone Coleman also thanked Macon and her team, said he has enjoyed working with them, and looked forward to continuing that work. Relationships between city and housing authority officials have been strained at times in the past.

Also at the meeting, Macon stated that efforts were underway to provide more units that are accessible for people with disabilities, as required by federal law and under a compliance agreement between the agency and HUD. Additionally, Macon said the agency plans to amend its occupancy policy outlining the rights and responsibilities of tenants and the agency.

CAIRO – U.S. Sen. Mark Kirk has sent a letter to the Department of Housing and Urban Development’s Inspector General calling for an investigat…

CAIRO – At the headquarters of the Alexander County Housing Authority, where a public housing scandal has brought federal authorities to town …

The Alexander County Housing Authority Board met Wednesday afternoon, its first meeting since a federal takeover of the organization.

The new HUD managers of Alexander Housing Authority (ACHA) met with residents at the authority headquarters on Feb. 23 in Cairo.