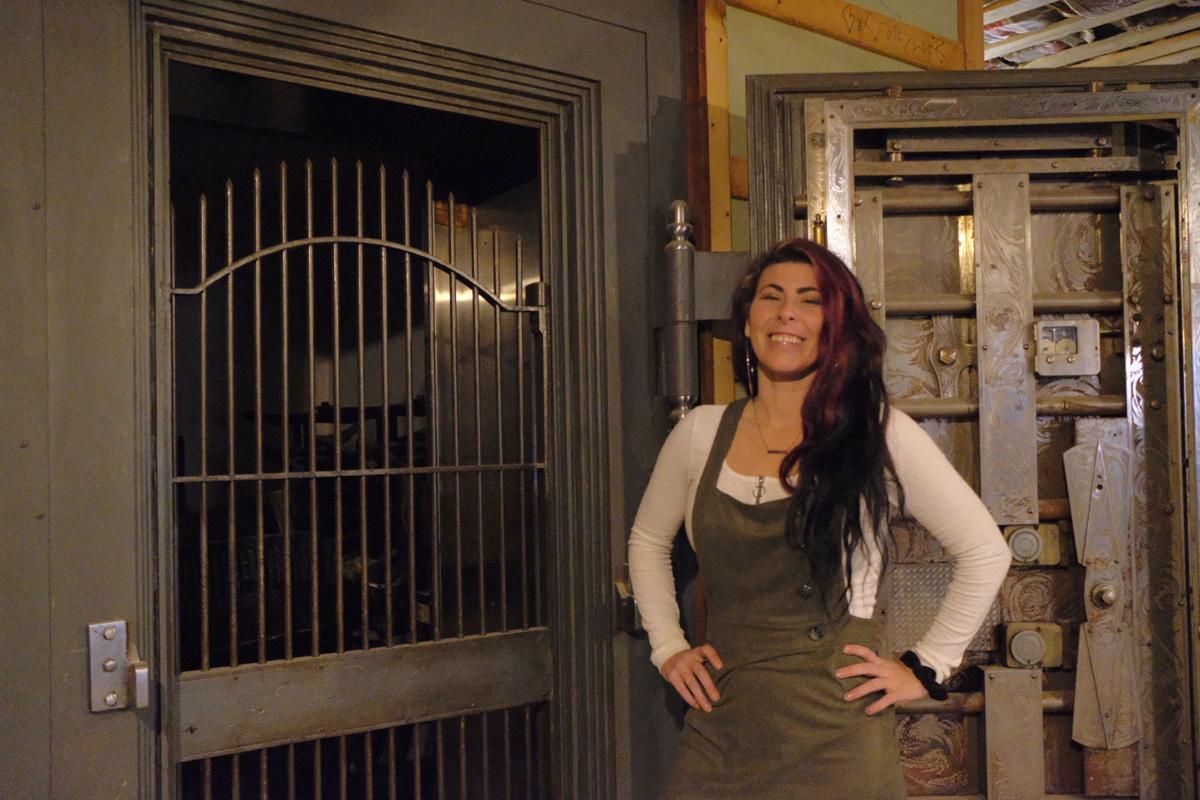 Holly Roeder poses for a portrait March 19 in her soon-to-be open cannabis consumption lounge Lune Lounge in Sesser. Behind Roeder is the old bank vault she plans to use to house “The Joint,” Luna Lounge’s head shop. 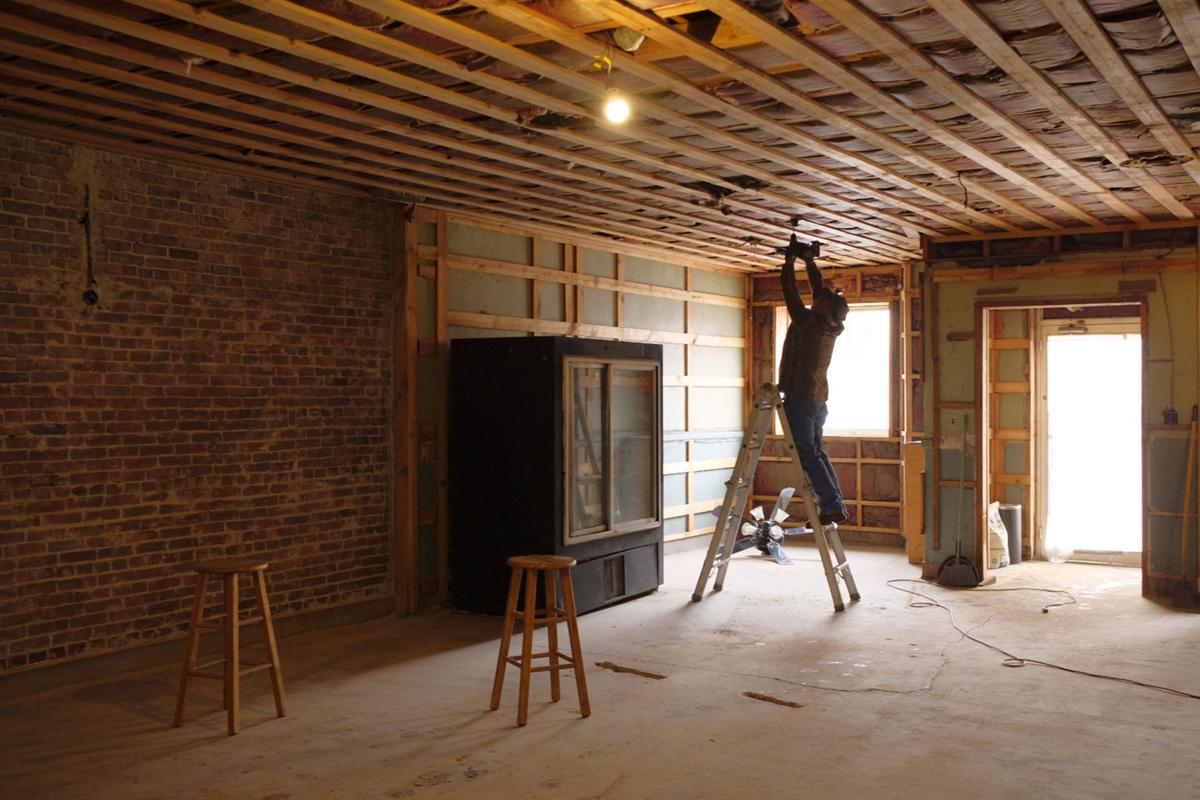 Gary Roeder works March 19 inside what will soon be the Luna Lounge, a cannabis consumption lounge in Sesser.

SESSER — Nineteen months after recreational pot became legal in the state, firsts are still rolling out and the opening of Sesser’s Luna Lounge is another.

The state’s cannabis law says the pot products cannot be consumed in public — this means even on a person’s front porch where visible to the street.

So, tokers have had to smoke in private. But, some can’t even do that as they have driven from out of town to buy and consume legal pot or live in apartments that ban its use on the property.

This means consumption lounges, businesses where smoking, vaping and the like are allowed, are an enticing option for consumers. But, they look good for investors, too, who are looking to expand into the cannabis industry.

Holly Roeder took a leap to open the state’s first cannabis consumption business — the Luna Lounge located in the dot-on-the-map town of Sesser in Franklin County. She has ties to the area and said the old bank building she got for a steal is perfect for the lounge.

When The Southern talked with Roeder in March, she had hoped to open the lounge within about two months. However, construction delays and project cost increases made her push that back.

In the months since she last talked with The Southern, it has been all-hands-on-deck for her to get the place ready for a grand opening on July 10, a stoner holiday that celebrates cannabis oil — flip over 7/10 and it spells the word.

She said she has picked a date and stuck to it for her opening.

“This is f------ happening,” she remembered telling herself when she set her goal opening date.

The work has been hard and non-stop, she said — she joked that she and her team, mostly family, have been sleeping onsite. There’s been painting and ordering furniture, the flooring will be laid this week and the finishing touches are going to start going up.

If she’s lucky, Roeder said she hopes to have things wrapped up a few days before the big event next week.

Though there have been rumors and reports of other consumption lounges coming to the state, Roeder said she still looks to be the history-maker by opening Luna Lounge.

"I was a fool." Carbondale man finds quiet life by the river — after spending 20 years in prison

This is quite the about-face from his life 50 years ago. Dwight Violette spent 26 years, eight months in prison for 1977 charges of attempted murder and armed robbery.

The Luna Lounge can host 60 people at a time and Roeder said presale tickets have sold out. This means those with tickets will get to be inside and smoke. But she said customers without tickets can still come through to see the place and visit The Joint — the in house head shop located in the old bank vault.

Inside there will be entertainment from Mr. Hydration, Pyrus Wade and others. While space inside is limited, Roeder said the block will be shut down outside to make for a fun atmosphere there. There will be a food truck outside from Baldy’s BBQ as well as tarot card readings and a fire-breather. But, one thing will be absent.

“There is never any consumption of cannabis outside … you will be banned,” she said. The law forbids consumption in a public space.

Despite the current labor shortage caused by the COVID-19 shutdown, Roeder said there has been genuine excitement about her business and hiring hasn’t been an issue.

“Honestly, since we’re such a weird, cool business people have been sending me resumes by the buttload,” Roeder said.

Unlike opening a dispensary that sells cannabis, consumption lounges have relatively few hoops to jump through. Illinois allows local municipalities to regulate consumption bars as long as they fall within broad state guidelines that the business must primarily operate as either a cannabis dispensary or tobacco shop.

The state's Smoke Free Illinois Act, which regulates smoking in businesses, was amended in 2019 to allow for cannabis consumption lounges, according to a spokesperson for Illinois Gov. J.B. Pritzker.

The amendment gives local governments the ability to create their own rules and regulations for these types of businesses, so long as they meet a few basic guidelines laid out by the state.

Consumption lounges must limit customers to 21 years of age and up, designate a specific area for consumption and keep the door to the consumption area locked.

As for what her hours will be moving forward, Roeder said that’s still somewhat up in the air.

She knows it will be a seven-days-a-week affair, though.

Taking the industry out of the cash-only operating model, a bill moving its way through Congress would provide legal cannabis markets access to traditional banking services.

Luna Lounge customers will have to bring their cannabis but Roeder said Luna will offer smoking papers, pipes and other accessories for purchase or rent. These will be offered by their server who will resemble cigarette girls of old.

When guests leave, they are given a legal bag to carry home any leftover bud they haven’t used.

The Williamson County Sheriff’s Office is investigating after the discovery of skeletal remains in the Crab Orchard National Wildlife Refuge.

The Illinois Board of Higher Education and the Illinois Community College Board issued new guidance following an uptick in statewide COVID-19 cases.

John Nimmo, an Anna business leader and real estate broker, is the author of a new book which takes aim at the habit of procrastination. “Why Wait? A Leader’s Perspective on Procrastination,” has reached best seller status on Amazon’s business and personal development categories.

Martiece Arrington is a recent graduate from SIU in Carbondale.

Southeastern Illinois College has become a powerhouse in the world of forensics -- competitive speech -- winning the 2021 National Championship Tournament and placing in the top four nationally 26 times since 1986.

Holly Roeder poses for a portrait March 19 in her soon-to-be open cannabis consumption lounge Lune Lounge in Sesser. Behind Roeder is the old bank vault she plans to use to house “The Joint,” Luna Lounge’s head shop.

Gary Roeder works March 19 inside what will soon be the Luna Lounge, a cannabis consumption lounge in Sesser.