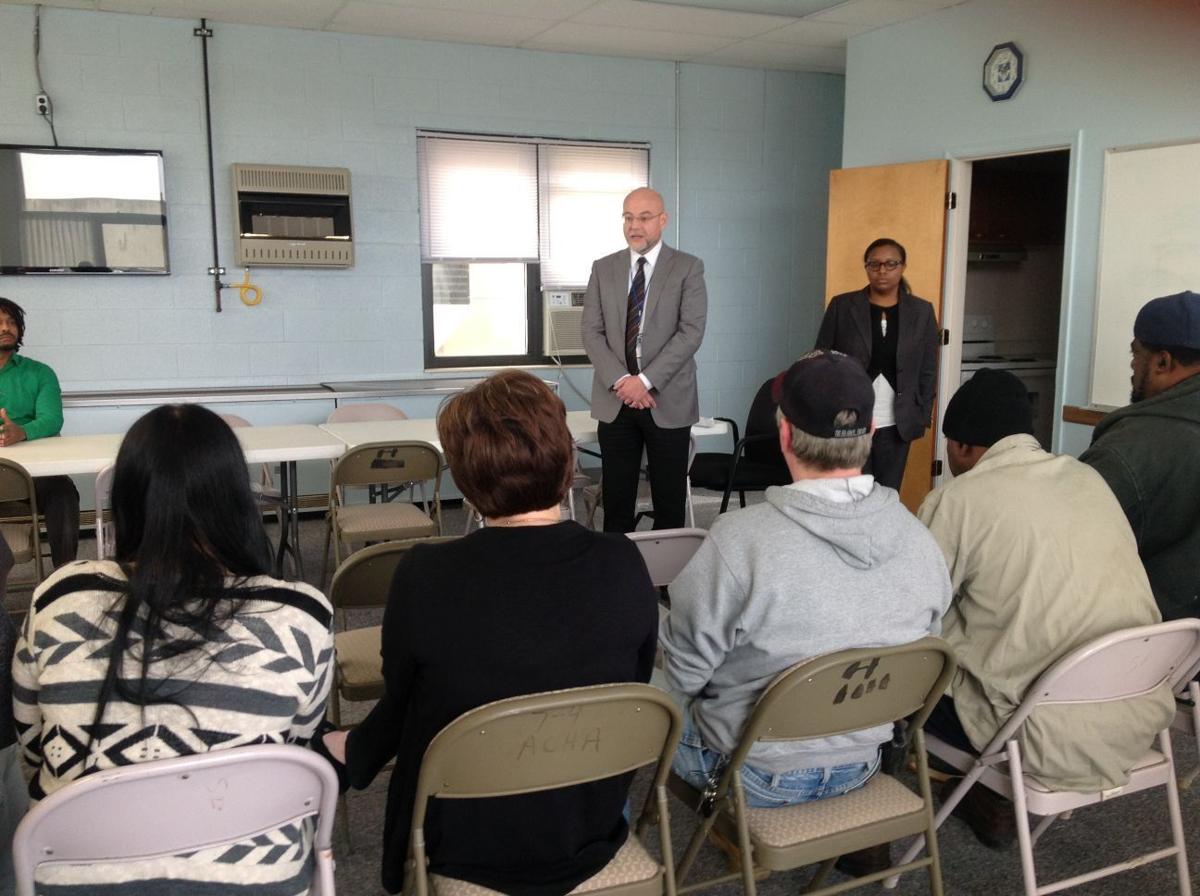 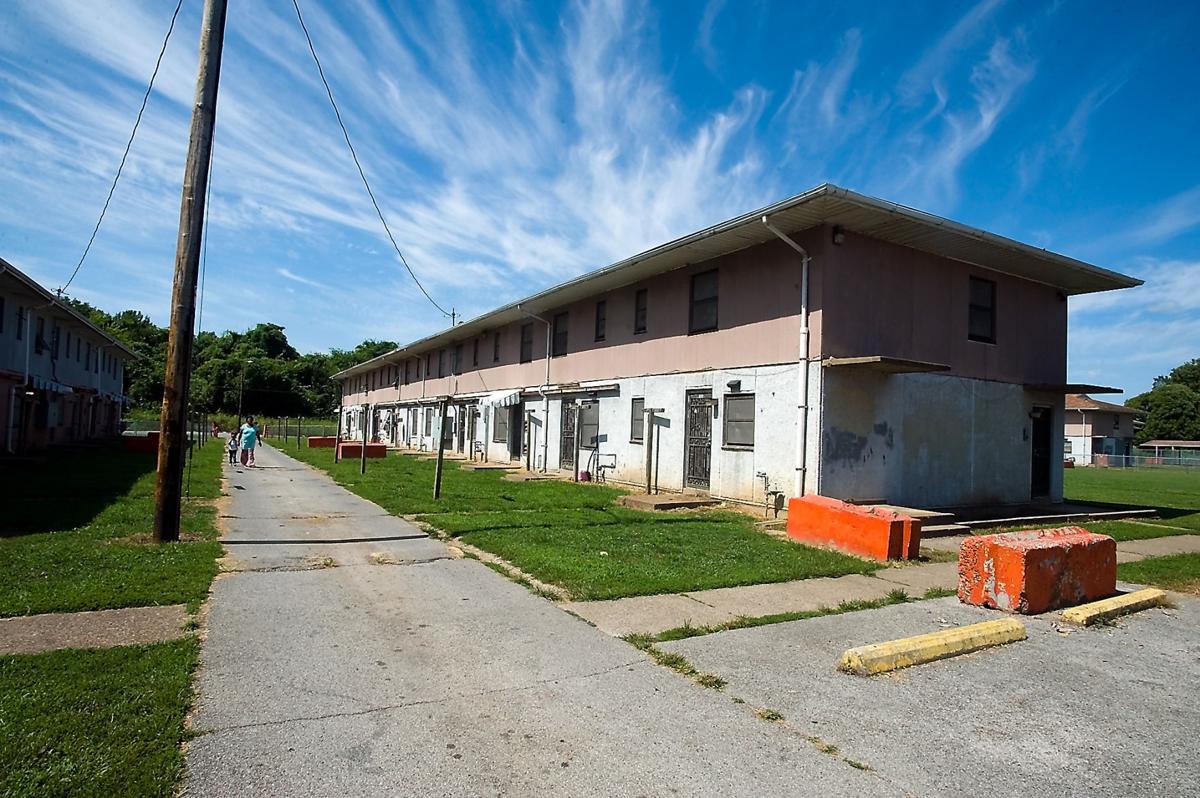 CAIRO – With a team of six HUD officials reporting to work in Cairo on Monday, The Alexander County Housing Authority became the 19th housing authority to be taken over by the federal government in the past 30 years.

Paul Lambert, who has lived in the ACHA’s Elmwood Place complex since 1978, said he hopes this rare decision by HUD leads to positive change for residents living in rundown apartments besieged by infestation and violent crime.

“It can’t be worse,” he said. “Something had to give. I’ve seen problems come and go and problems and problems on top of problems. I could write a book on it.”

Those problems, which include allegations of lavish spending to send former executives on junkets, fancy meals and benefits while residents went without, apparently reached a tipping point for federal officials.

Brian Sullivan, a spokesman for the U.S. Department of Housing and Urban Development, said the agency loathes taking over local housing authorities, and only does so as a last resort. The takeover is related to HUD’s determination that the Alexander County Housing Authority violated the contract under which it receives congressionally appropriated federal dollars administered by HUD, as well as other federal laws and obligations.

“We only do it in the most extreme cases and only when it’s required to protect the health and safety of family who, like all of us, are looking for a decent place to call home,” Sullivan told the newspaper in an interview Monday afternoon.

HUD, in a news release published just after 10 a.m. on Monday, stated that the federal agency had immediately taken possession of the housing authority headquartered in Cairo that has nearly 500 housing units in its inventory. That means the five members of the ACHA board have been relieved of their duties, though no employee has been dismissed.

The release stated the action followed a “years-long pattern of financial and operational mismanagement, poor housing conditions, and alleged civil rights violations against the households the housing authority was responsible for assisting.”

In a letter addressed to Andy Clarke, the former ACHA board chairman, HUD’s Lourdes Castro Ramirez, a deputy assistant secretary, outlined a variety of areas in which the federal government alleges the ACHA has failed to perform its duties to a reasonable standard. Clarke declined comment to The Southern Illinoisan. 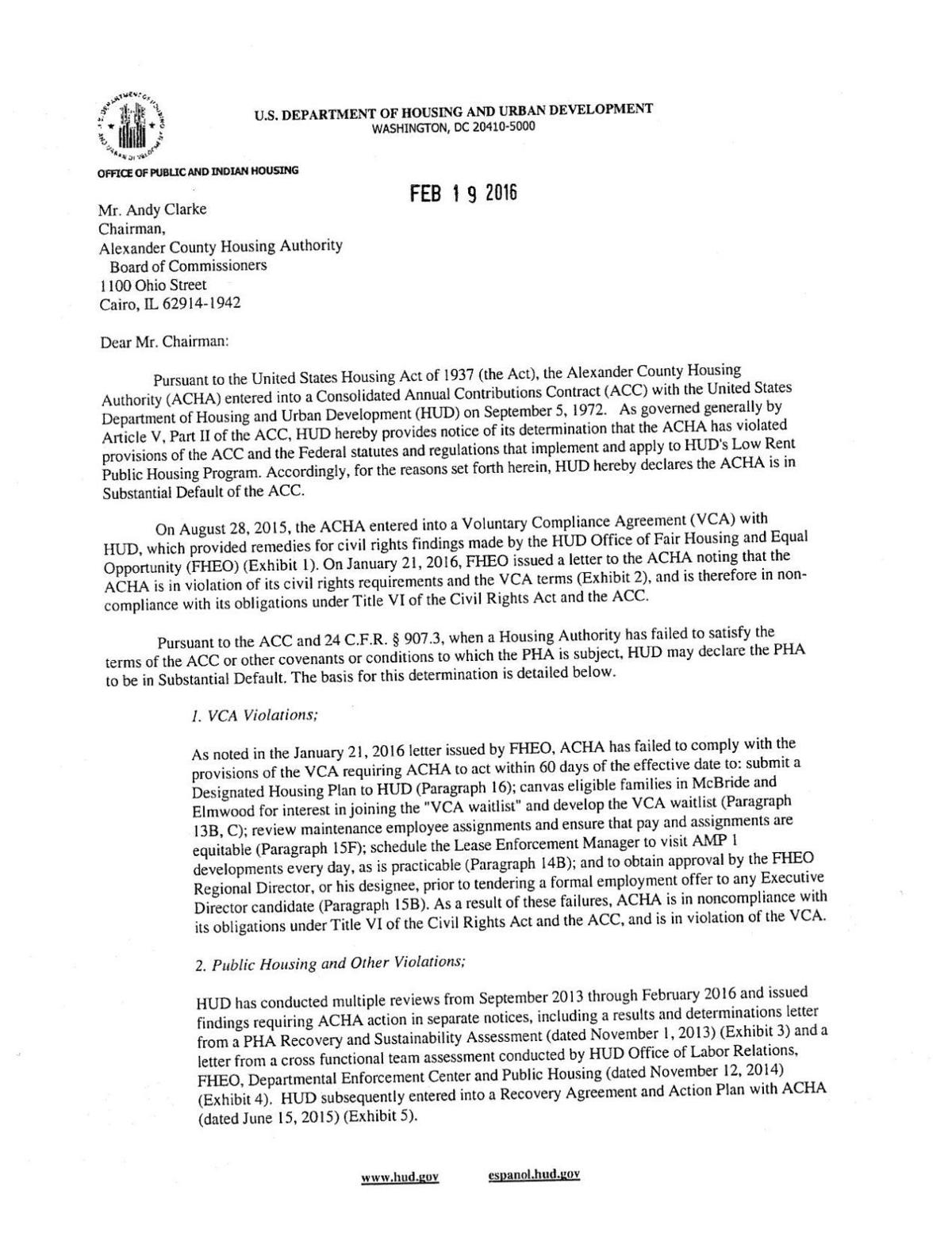 Noting citations that date back to 2013, as well, Ramirez said the ACHA has failed to follow through on agreements to correct cited problems, including discriminatory practices against black residents and employees, and therefore also is in violation of its obligations under the Civil Rights Act.

The letter from Ramirez continues, “HUD has determined that ACHA has substantially and materially violated” its contract with the federal government. “Further, ACHA has demonstrated that it is not capable of correcting these violations and ensuring that they do not recur. These serious and numerous violations pose an imminent threat to the life, health, and safety of the public housing residents in all of the ACHA public housing projects.”

In the turnover, two HUD officials, Stephen Schneller of San Francisco, and Towanda Macon of Chicago, were named co-administrators, and also will make up a two-person board. The other four members rounding out the six-member HUD team, all with experience in various aspects of working with troubled housing agencies, are from San Antonio, Texas; Louisville, Kentucky; Kansas City; and Washington, D.C. They are temporarily lodging in Paducah, Kentucky.

The team reported to ACHA’s headquarters at 9:15 a.m., accompanied by federal agents from HUD’s Office of Inspector General for security purposes, as ACHA workers were not aware of their pending arrival, Schneller and Macon said in a phone interview with the newspaper on Monday. They said the transition was without incident, and followed by a meeting with employees.

CAIRO -- Shanice Hardamon pointed to the two bullet holes in her apartment door.

“We met with the employees today, and notified them that, at this time, there’s no changes to anyone’s terms and conditions of employment,” Schneller said. “No one has been dismissed.” That includes Jason Ashmore’s position as executive director, they said, a role he has held for about a month without pay because his contract was never approved by the board. “He still functions in that role but he’s reporting to us,” Macon said. Ashmore, who also is the mayor of Sesser, declined comment to the newspaper, saying he was not allowed to speak to the media per HUD’s orders.

After the employee meeting, memos announcing the takeover were delivered door-to-door to residents. It also informed residents of a meeting scheduled for 6 p.m. on Tuesday for them to ask questions of the new HUD managers of their housing authority.

Macon said the team will be in Cairo for an undetermined amount of time — “until we feel progress is being made” — but the ultimate goal is to turn the agency back over to local control. The first step, she said, is for the team to gain a thorough understanding of the condition of units and the ACHA’s financial picture. From there, issues needing attention will be prioritized, Schneller said. But as for specific details and timelines, Schneller noted Monday was their first day on the job.

U.S. Rep. Mike Bost, whose district includes the area, said his office was informed of the decision Monday morning. He said aides in his office as well as those from the offices of Sens. Dick Durbin and Mark Kirk have been in close contact with HUD since August, when The Southern Illinoisan published its first story on the topic titled “Chaos in Cairo.”

Bost credited the work of The Southern Illinoisan with bringing issues to light, in addition to the public outcry and organization of citizen activists in Cairo that followed, with pushing HUD toward the significant step the federal government took on Monday to seize governance of the ACHA’s operations.

“We have been talking with HUD on the issue ever since (The Southern Illinoisan) broke the story to try to figure out the best way to handle this,” Bost said.

In a statement, Durbin said his office is committed to continuing to work with HUD, community officials and residents “to see that swift changes are made to improve housing for the residents and that local control is restored as soon as possible.”

In his statement, Durbin noted that he and Bost wrote a letter to HUD Secretary Julian Castro calling on HUD to investigation allegations of misspending and mismanagement outlined in the newspaper’s August article.

Voice of The Southern: HUD makes good on its promise

For years the Board of Commissioners of the Alexander County Housing Authority has been on a collision course with the U.S. Department of Hous…

Actor Christopher Jackson clings to his roots as his star rises

This story was originally published on March 8, 2016.