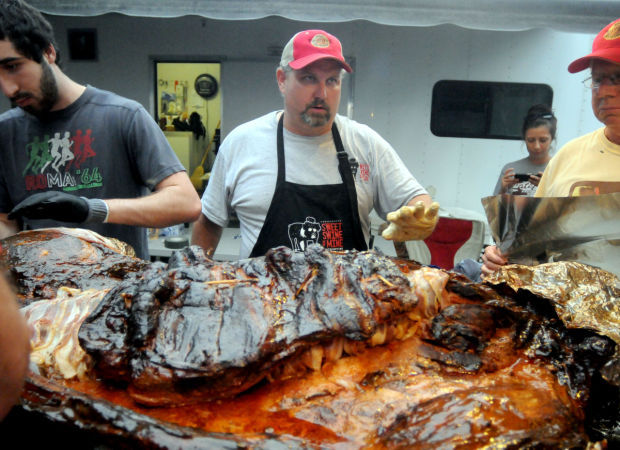 Mark Lambert talks about topping off their hog with foil during the 2013 Murphysboro Barbecue Cook-off. 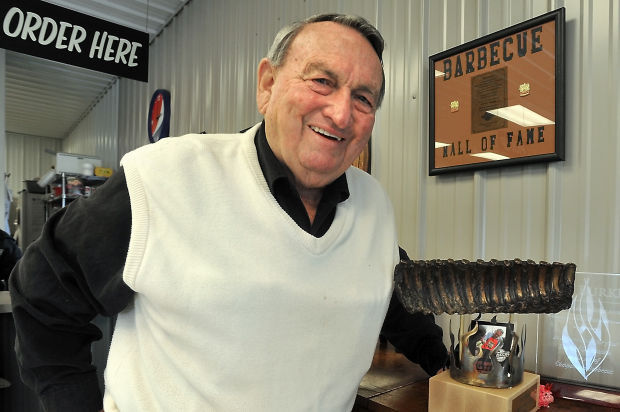 Pat Burke poses on Feb. 27 in his restaurant, Pat’s BBQ and Catering, in Murphysboro. Burke has been nationally recognized for his barbecue. 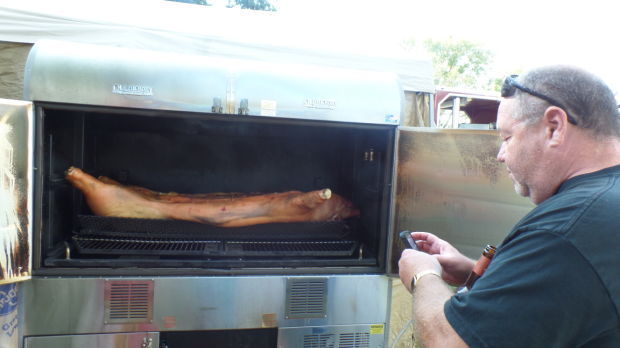 Shaun Will of Murphysboro prepares to baste a whole hog his team is cooking during the 2014 Praise the Lard Barbecue Cook-off. 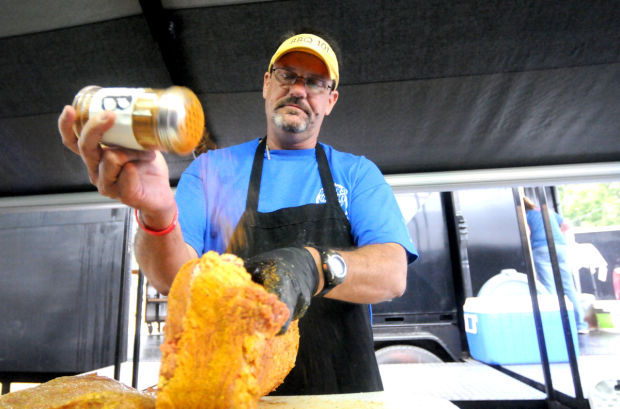 Sam Cararas of 'Boars Night Off' applies a dry rub during the 2013 Murphysboro Barbecue Cook-off.

Debbie Moore Special to The Southern

MURPHYSBORO -- Facebook was abuzz Thursday afternoon with the news. The House unanimously supported HR0207 and named Murphysboro as the BBQ Capital of Illinois.

Rep. Bryant said in a news release, “This is big for my hometown of Murphysboro. I am proud to sponsor the BBQ resolution because it promotes Southern Illinois and the good things we have to offer. I want to increase tourism to our area and I think this is one way we can highlight some positivity in Illinois and maybe generate some buzz and some tourism.”

Following the official announcement, in yet another Facebook post, Amy Mills indicated that “food tourism makes a huge difference in our town and region.” Mills bases that notion on her experience. She’s worked with her dad, Mike Mills for most of the past two decades and they have tracked their customer base. They know the large numbers of visitors to their Murphysboro restaurant that have come from far enough away to be considered travelers. Mills conservatively estimates their annual barbecue cook-off alone has generated $4.5 million in tourism impact over the past several years.

The father and daughter Mills team knows the food business. They own two restaurants in Southern Illinois and two in Las Vegas. Murphysboro’s establishment was their first restaurant and this year marks its 30th anniversary. The team also knows the tourism business. The book they co-authored 10 years ago, "Peace, Love & Barbecue," includes a list of their favorite barbecue restaurants nationwide. They know that the baby boomer travel market uses their book as a resource, creating food travel itineraries by following the list of restaurants.

That is why Bryant and Stephens were on a quest to name Murphysboro the BBQ Capital of Illinois. Southern Illinois historian and founder of the General John A. Logan Museum, Mike Jones was invited to help with the research. A significant amount of research was undertaken, and the end result was a document that details the historic timeline of the barbecue culture in Murphysboro.

Jones indicated that he enjoyed the research because he believes that who we are and why we do things is based upon our history.

“Murphysboro has this designation today because Shemwell’s Barbecue opened in Murphysboro in 1933, and because Tom Ellis opened The Barbecue Stand in 1937 on the corner of Walnut and 22nd Streets,” said Jones. Twenty-nine barbecue stands and restaurants have called Murphysboro home. Barbecue has been served at the 17th Street location for more than 100 years, first as the Ellis Tavern then as Al & Ray’s and finally as 17th Street Barbecue.

While those early pitmasters laid a foundation for this recent accomplishment, it is Mike Mills, Pat Burke and Rob Williams who put Murphysboro barbecue on the map. Mike Mills, owner of 17th Street Barbecue, is known as “The Legend” and has won four World Championships and three Grand World Championships at the Memphis in May “Superbowl of Swine” cook-off. Pat Burke joins Mills in membership to the prestigious BBQ Hall of Fame. Burke owns Pat’s BBQ and Catering in Murphysboro and has competed in more than 255 BBQ contests and has won 185 grand championships, more than any other living person.

Rob Williams was a member of the original Apple City Barbecue Team with Mills and Burke. The team was established in 1989 in an effort to support the city’s annual barbecue competition established the same year. According to Amy Mills, when Williams approached her dad about creating the event, Mike Mills agreed in hopes that it would lure potential business developers to town.

The approved house resolution lists several important facts, including that the Travel Channel has already named Murphysboro in the top 8 barbecue destinations in the United States. It states that Murphysboro is the home of numerous barbecue teams that compete nationally, regionally and locally in the city’s annual competition, which is the first and only cook-off sanctioned by both the Memphis BBQ Network and the Kansas City Barbecue Society.

The resolution praises the many BBQ establishments that have made Murphysboro their home over the years, as well as, the production of Cairo Bar-B-Q Sauce, made by the Killebrew Supply Company in Murphysboro. Most importantly, the resolution clearly states that barbecue has contributed greatly to the economy in Murphysboro and in the entire state of Illinois.

Stephens launched the effort when he approached Bryant with the idea, just after she was elected in 2014. Bryant filed the resolution on Feb. 26. On March 3, the resolution was sent to the House Rules Committee. On March 13, Rep. Brandon Phelps, D-Harrisburg, came on as an additional sponsor. On April 21, the House Tourism and Conventions Committee recommended that HR0207 be adopted and exactly one month later, on May 21, the House of Representatives unanimously adopted the resolution.

Throughout the process, the marquee at 17th Street kept residents appraised of the progress with messages like, “It’s all going very well.” A petition supporting the resolution had 2,227 signatures. On May 20, Stephens took 118 goody bags to Springfield to lobby for the designation. The bags contained Cairo Bar-B-Q Sauce, sauce from Pat’s BBQ and sauce and Magic Dust from 17th Street.

Stephens said, “I just think it’s beautiful and an extra sense of pride for the community.”

Freida Kimes has big plans for her little food truck, and the Funkalicious Food chef couldn’t contain her excitement when talking about all th…

Apple Tree Inn in Murphysboro has a new owner

MURPHYSBORO — The Apple Tree Inn property has a new owner.

You are having dinner in a restaurant. The waitress is friendly, but service is slow. Or, your food is not exactly what you ordered. What do y…

A 'complicated' journey: The story of Logan and Memorial Day

Memorial Day may be one of Americans' favorite holidays.

In Southern Illinois, almost every conversation leads to food.

INA — Murphysboro may be the official Barbecue Capital of Illinois, but Ina is home to Illinois’ top barbecue sauce.

Mark Lambert talks about topping off their hog with foil during the 2013 Murphysboro Barbecue Cook-off.

Pat Burke poses on Feb. 27 in his restaurant, Pat’s BBQ and Catering, in Murphysboro. Burke has been nationally recognized for his barbecue.

Shaun Will of Murphysboro prepares to baste a whole hog his team is cooking during the 2014 Praise the Lard Barbecue Cook-off.

Sam Cararas of 'Boars Night Off' applies a dry rub during the 2013 Murphysboro Barbecue Cook-off.