Across Southern Illinois, people are reporting for COVID-19 pandemic duty with an unlikely weapon: their sewing machines.

Collectively, they have made hundreds of homemade face masks for paramedics, nurses, doctors, nursing home staff, drivers, cooks and others whose jobs require that they keep showing up while the rest of us hunker down at home.

They join an unofficial network of people across the country sewing masks in response to a critical shortage of them.

These masks, generally made with cotton, elastic bands and a dose of love, are no substitute for the highly sought-after N95 disposable respirator masks, or even routine surgical masks that most clinics and hospitals never dreamed they’d be without. But they allow medical facilities to ration their high-grade masks for personnel who need them most, while offering some form of protection to others who want it.

“I just figure any kind of protection and a barrier from other people is better than nothing. It’s definitely not what they deserve, but it’s all I can do,” said Tammara Ozee, of Harrisburg, echoing a widely shared sentiment among those who are sewing.

It's a small world after all

Ozee never imagined herself in this role, answering the call of duty bent over a sewing machine in her dining room. And not only because COVID-19 was unheard of to the world just a few short months ago.

Four years ago, Ozee’s husband bought her a sewing machine. He wanted to encourage her to learn to sew clothes, and fix his work overalls.

Instead, it sat collecting dust in their Harrisburg home.

“I remember when he first got it, he realized I didn’t have any interest in it,” she said. “He was sitting in the dining room sewing his work overalls — there was a hole in them — and I was sitting in the living room on the couch watching football. And he was like, something’s wrong with this picture, joking around about it.”

But eventually, Ozee introduced herself to the machine, and they became friends, in the way two people from vastly different backgrounds may find themselves surprisingly bonded despite the odds.

The family had recently returned from Disney World. They love it so much that they are annual pass-holders. But it wasn’t all magical: the mouse-ear headbands they enjoy wearing around the park dug into their scalps and caused headaches. “They were always really tight, and I thought maybe it was because we all have big heads,” she said. She was determined to make mouse-ear headbands that were comfortable AND cute.

After a lot of trial-and-error, she made a product the family loved. And as it turned out, there was a demand for such head bands among theme park-lovers. She started her own niche Etsy business, Happily Ever After Ears, which is typically in its busy season right now as summer break approaches. But when COVID-19 spread to the U.S. and began to multiply, she flipped the switch off on her business and turned her dining room into a mask factory.

Ozee previously worked as an EMT with White County Ambulance Services, and her former colleagues were her top priority. She’s since fulfilled orders for nurses, nursing home workers, pregnant women, children who have had to make hospital visits, and bank employees — all free of charge.

“When this happened, it was well, I can’t get on a truck. But I can do this,” she said. “I can make these masks for everyone. It gives me a sense of purpose.”

Stitched together by a love of sewing

Ann Jeralds, Charlotte Goetz, Mary Schnur, Vickie Parry and Carolyn Wright are longtime friends united by a love of God and a passion for sewing. They are all members of the Kinkaid Christian Fellowship Church in Ava. Many of their social activities revolve around quilting, such as taking trips to fabric stores and the annual Paducah Quilt Show, or getting together to sew and chat.

When word circulated that there was a need for homemade masks, these ladies knew they were well suited to the task, especially Parry. Prior to her retirement four years ago, she worked for decades as a surgical first assistant for more than a dozen Southern Illinois surgeons. Most of her days involved wearing a mask. She's been sewing since her youth, and is president of the Shawnee Quilters Guild.

“I just love quilting and sewing,” Parry said. “When this issue came up, I knew that I had the skill to do the sewing, and I had the background to understand the importance of it, and to understand how a mask is supposed to fit.” But she hesitated to jump in at first, concerned that people wearing homemade masks would have a false expectation about their level of protection.

Trying to address this dilemma, Parry said she used her medical contacts and successfully obtained several surgical barrier drapes. The ladies are sewing that material inside the cotton pieces to provide an extra layer of protection.

“It’s not the best, but with the supplies that we have, I thought it would provide the best protection that we could under the circumstances, being that these are homemade,” she said.

As supply-chain disruptions have affected the availability of masks, the sewers have faced challenges, too, as living-room production has ramped up nationally.

"What is really kind of funny," said Wright, of Pinckneyville, "is we had the run on toilet paper. Now we have had a run on elastic. You can’t find elastic anyplace." Luckily, the ladies have a decent stash between them — for now — and Wright said she's glad she can contribute in this way.

“I think it’s amazing that everybody has chipped in and is doing this,” Wright said. “It’s just doing something to help somebody, even though it’s just a small kindness.”

They've provided their masks to area nursing homes, bank employees and City Hall workers in Ava. Parry said she's waiting on additional guidance from area medical facilities about whether they can use homemade masks, and if so, whether they have specific guidance on how they should be made.

If the call comes in for help, the 80-member Shawnee Quilters Guild stands ready to answer it, she said. "Those ladies, believe me, will kick it in gear making masks," Parry said.

It's the least they can do for the front-line workers risking their health to tend to others, she said. “I can almost get teary eyed, because I respect this field so much that they’re willing to walk in harm’s way to help people and they should be commended and loved to the hilt.”

Students join in on sewing for a cause

When school was called off earlier this month, Murphysboro High School students in Lori Elwell's family consumer science class had to walk away from the pajama pants they were sewing.

It's unclear if they’ll be able to come back to them this year. Elwell said she reached out to the girls in her class to see if those with machines at home wanted something to work on in the meantime.

Several of them did. So, Elwell decided she would teach them to make face masks, assuming they would be put to good use.

Last week, with parental permission, she dropped off sacks on their door steps that contained fabric, a pattern, thread and elastic. Then she emailed the students a tutorial video in which she walked them through the process.

Sophomore Raegan Ripley said the project offered a great distraction. The video was funny, and afforded students a peak inside Elwell's home that they had never seen before. "She showed us around her sewing machine room and was making jokes the whole time. It was hilarious."

Elwell said she though each student would make a few each. But she expects to collect in the neighborhood of 70 by the end of the week.

“They were emailing me, 'We’re out of elastic and nobody has any,'” she said. “So I ran around town dropping off elastic to the girls that wanted more. I’m so proud of them.”

Elwell said that a parent of a school child not in her class heard about what she was doing, and asked if she could have the masks. She works at Southeast Hospital in Cape Girardeau, Missouri, and said there was a need for more there.

Ripley said she feels good knowing that the project might help others. It was also a welcome distraction as the days under a stay-at-home order drag on. "Even though we were at home, I liked that it made me feel a little like I was in class," she said, "and that we were still in school and not in the middle of this weird time."

Aides caring for vulnerable seniors amid coronavirus still on the job despite lack of PPE, social distancing

As the nation scrambles to keep its doctors and nurses supplied with safety gear during the deadly novel coronavirus outbreak, an army of low-wage Illinois home care workers on the front lines remain largely on their own. 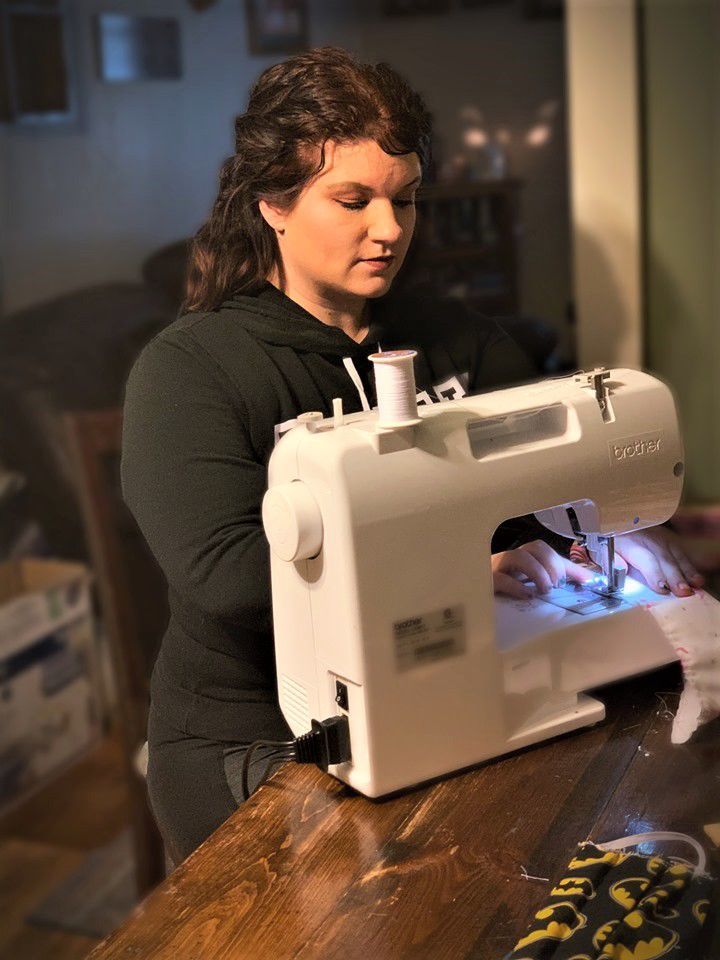 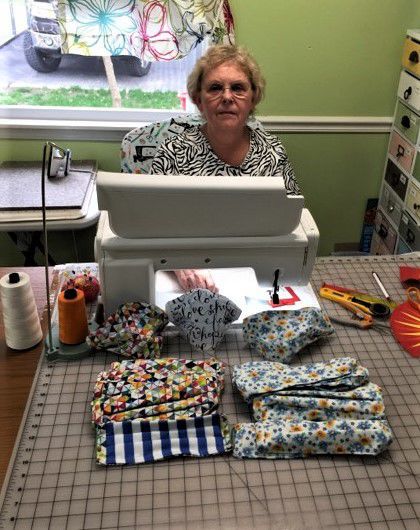 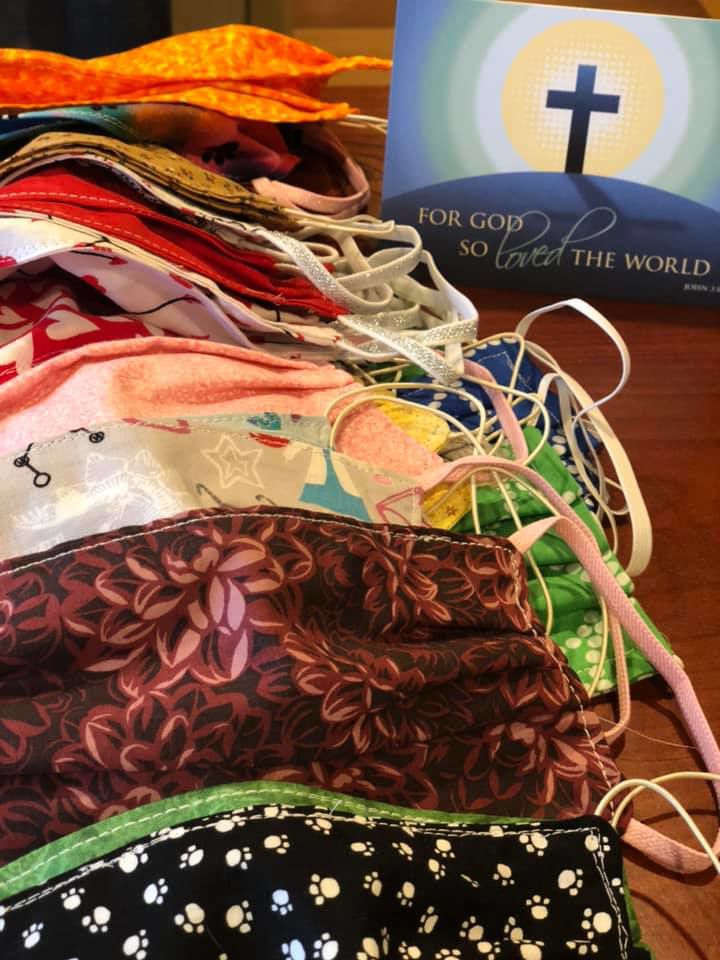 Ladies from the Kinkaid Christian Fellowship Christian Church in Ava provided homemade masks and a card to the Pinckneyville Nursing & Rehabilitation Center.