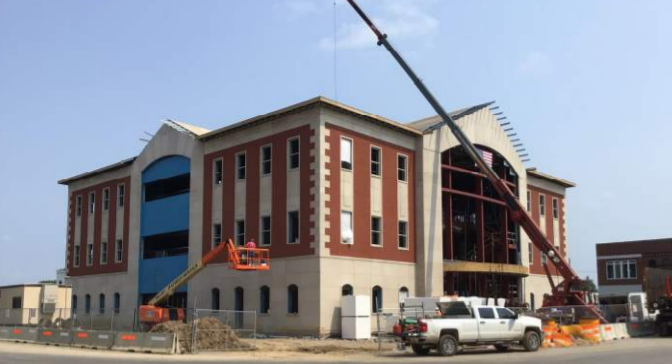 The new Franklin County courthouse is nearing completion and an opening date has been set for this April.

A dedication ceremony, followed by a series of tours of the new three-story courthouse, has been set for 11 a.m. April 22, according to the Benton/West City Area Chamber of Commerce.

The project for a new courthouse started after a 1% Public Safety Tax increase was passed by ballot referendum in the 2019 consolidated election, Franklin County Treasurer Steve Vercellino said.

The tax increase will help pay for the total cost of the $22 million project, which included things like demolition, parking, office renovations during construction and financing of the project itself. Bond payments will be made for several years, according to Vercellino.

Actual construction costs have only risen slightly to $12.9 million, compared to $12.6 million, officials said. Officials said they were able to keep the cost very close to the original budget despite challenges along the way.

When the project was first proposed, not everyone in Franklin County was onboard.

Semitrailer crashed and jackknifed on I-57 near Marion

“Many Franklin County residents enjoyed the history and the architecture of the old courthouse. But those inside on a daily basis knew it no longer served its primary function well,” Vercellino said. “Even after adding wings to the structure that was built nearly 150 years ago, there was insufficient space to properly run a court system. The foundation had issues, there were leaks, maintenance was expensive, and it was difficult to retrofit a building to meet the technology demands of today.”

"Being a historian, I was against it. When I was told about it, I said 'I am going to tie myself to the bulldozer and I'm not going to let this happen,'" Rea said. "But then I realized the building was in need of replacement. The real realization was that saving the historic site (the land) was the thing that we needed to do."

Rea originally thought saving both building and land would be what was best for the community, he said.

However, after the price consideration and the possibility of losing both without funding, he and others with the same mind set came to see a new courthouse on the land of the old one would continue its legacy, Rea said.

"The legacy of the land that it sat in over the past 145 years has symbolized a lot to the citizens of Franklin County," Rea said. "It stood there through all kinds of incidents such as World War I and World War II. It stood and it served its purpose for a long time."

Safety standards have continued to improve since the inception of the old courthouse building in Franklin County, and that is the primary reason for the entirely new building.

"But because of the significant amount of changes that would have had to have been done, the building would be required to meet the current building standards for courthouses. Following new strict standards, (the) old courthouse would have been basically impossible, and exponentially more expensive than just bringing down the old structure and putting a new structure in its place," he said.

The project has already brought increased traffic to the area, Vercellino said.

“It has shown that we can work together to achieve works much bigger than ourselves,” Vercellino said. “The new structure has already brought a sense of hope and growth for the county. New businesses have been coming to Franklin County and we hope the best is yet to come.”

Both Vercellino and the Benton/West City Area Chamber of Commerce hope this building will serve the public for the next 150 years following the dedication ceremony.

The entire dedication will be of no cost to the taxpayers, the Benton/West City Area Chamber of Commerce said.

Funding for the event will instead come from the revenue generated from advertising in a 48-page commemorative booklet containing editorial content and pictures of the old courthouse, demolition, and different phases of construction, the Benton/West City Area Chamber of Commerce said.

A free copy of the booklet will be given to everyone who tours the new courthouse that day.

Individuals who take the tour will also receive a souvenir coin with a picture of the old courthouse on one side and the new courthouse on the other, the Benton/West City Area Chamber of Commerce said.

There will also be a individual playing the role of Benjamin Franklin as a central figure in the dedication ceremony, Rea said.

The square will be closed to traffic for the ceremony, Rea said.

The Benton/West City Area Chamber of Commerce expects plenty of folks will come and celebrate the courthouse’s commissioning ceremony with them.

“Jim Muir will give periodic updates on our progress but knowing that interest is high for many people who want to see the inside of the new courthouse, I wanted to make sure that folks could make plans to save the date,” a spokesperson from the Chamber of Commerce said. “I was recently given a tour. It's a beautiful facility and should be a source of pride for all Franklin County residents."

IDOT seeks to make roughly 7.7 miles of Route 37 safer after close to 218 crashes were reported from 2013 to 2021, according to IDOT’s crash data. The improvements will begin near Wildcat Drive and will continue south endings near Illinois 148 including a new roundabout.

Pregnant panda! Watch as this giant panda gets an ultrasound