Hannah Merriman took nursing classes in high school — like a lot of the girls at her school. After graduating in 2015, she went to work as a certified nursing assistant.

But she didn’t care much for the work.

In 2016, she enrolled at Shawnee Community College without any particular direction. While researching her options, she was struck by a thought: What about welding?

“But I wasn’t sure, because I’m a girl and I’m five feet tall, and I didn’t really know if that was something I should even be thinking about.”

She completed her coursework in December, and — after a challenging test — received a call on Dec. 13 that she’d been officially certified by the American Welding Society.

Welding is a field that is expected to grow, especially as the nation's aging infrastructure faces repair needs nationally. It offers competitive wages and steady work, and Merriman joins other females across the country breaking into the traditionally male-dominated field. Efforts to grow the number of female welders have drawn headlines lately. “Weld Like a Girl: A Millennial Woman’s Success in a Man’s World” was the headline of a Forbes feature on the subject in November. “These women are turning to welding for a financial spark,” was the title of a story in the Detroit Free Press in June.

Still, only 5% of welders nationally are women, according to the U.S. Department of Labor.

Merriman said she was nervous when she signed up for her first welding class. She’d been taking general studies for a couple of years, but was still uncertain about her future. She mentioned the idea of joining the welding program to an adviser at the college.

“And they said, ‘Oh my gosh, well, there’s a ‘Women in Work Boots’ tonight actually that starts in two hours,” she said of a federally funded initiative of the college’s to introduce females to trade careers.

She hung around campus for a few hours, wondering what she was walking into. “That’s when I met my instructor, Randy, and got to weld for the first time in my life.” It was “very cool,” she said.

Merriman was nervous, though, and didn't want to spend too much money on something she might not like. She decided to take an introductory class before signing up for the full-time program. Merriman said that first semester was challenging, but welding also felt natural to her. “I really just clicked with it,” she said. “My teacher said it would probably be a mistake for me not to go into welding.”

That teacher, Randy Lingle, has been teaching welding classes for 27 years — about a dozen of them at Shawnee Community College. He has previously taught at Southeastern Illinois College in Harrisburg, and at Vienna Correctional Center.

“Hannah came in, and she said, ‘I don’t really know if I want to do this, can I take a class and see if I like it?’ She took the one class and she took to it like a duck takes to water. She loved it, and she’s good,” he said. “She really performed well. She’s one of the top students I’ve had.”

Merriman, 23, grew up in rural Union County. As children, she and her brother were assigned their share of chores — inside and outside the house. She took care of their horses. Manual labor and hard work, she said, were expectations, but also something she enjoyed. “I like working with my hands,” Merriman said. “I like to be able to do something different every day, rather than sit in the same spot every day.”

In high school, Merriman said she felt steered into the medical field or office-type jobs, as the trades weren’t discussed much with the girls. After graduation, she went to work as a CNA at a nursing home. “It wasn’t really a bad experience,” she said. “It just proved that wasn’t what I wanted to do.”

When she took her first welding class, Merriman was one of two females. Having another woman in the class with her helped. But, she said, “I would be lying if I said it wasn’t intimidating.”

“At first, you kind of wonder what they’re thinking or what they’re saying. But, as time went on, I got to know these guys and, for the most part, they’re just down-to-Earth regular guys with sisters — they’re good guys.” For the two semesters she was enrolled in the program full-time, Merriman was the only female in her class.

Merriman said she is impressed by how hard Shawnee works to introduce women to its trade programs. She suggested area high schools take a cue from the community colleges. Young girls might be missing out on opportunities they'd enjoy simply because no one has introduced them to the idea, she said.

Lingle said he hasn’t seen a large increase in female students, but he has taught several throughout the years. Women may shy away from considering welding, he said, because it’s been seen as a traditionally male job. That’s an unfortunate stereotype, he said.

“It’s something women can do if they want to do it,” he said. “And most of them are pretty good at it. It seems like they have a steadier hand.”

Some women, he said, find the tools intimidating. But Lingle said that taught properly, and given the confidence to know they can handle it, most get over that fear. Merriman said that’s how it was for her.

“The oxy acetylene torch, it shoots fire out,” she said. “The first time I saw it and the first time I used it, it was really, really cool. But at the same time it was scary, because it’s fire. It was intimidating for me at first, but I got used to it.”

Merriman said she would encourage girls in high school or women looking for a career change to give welding consideration. To be sure, she said, it’s not for everyone. It requires working long hours in uncomfortable positions and is physically demanding. But Merriman said that for those who take to it, welding can offer a career that is steady and interesting.

“Most of the time, it is pretty fun,” she said. “It’s not all fun. But if you’re one of those girls that likes a bit of a challenge, it’s definitely something to look at because there are so many work opportunities, and most of the time companies are looking for girls because they want to meet a standard at that.” 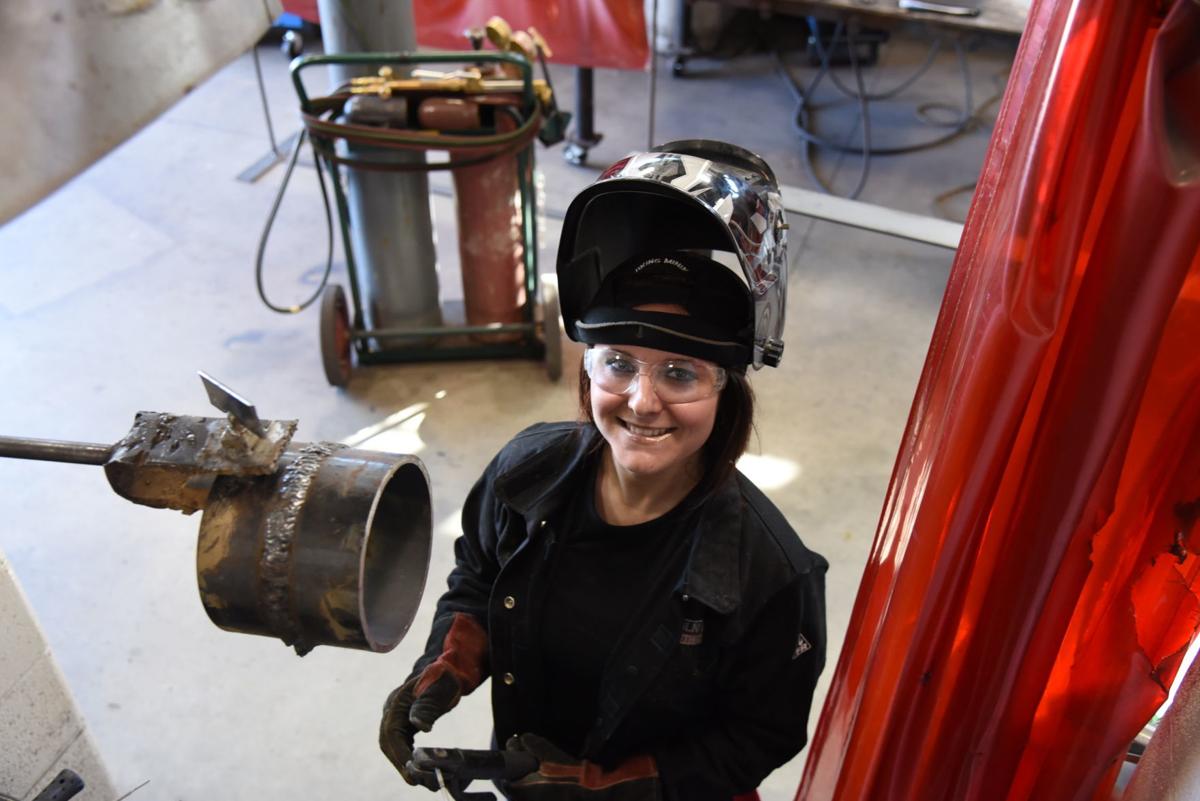 Hannah Merriman, 23, completed her welding coursework at Shawnee Community College in December, and has been certified by the American Welding Society. She joins other females across the country breaking into the traditionally male-dominated field. 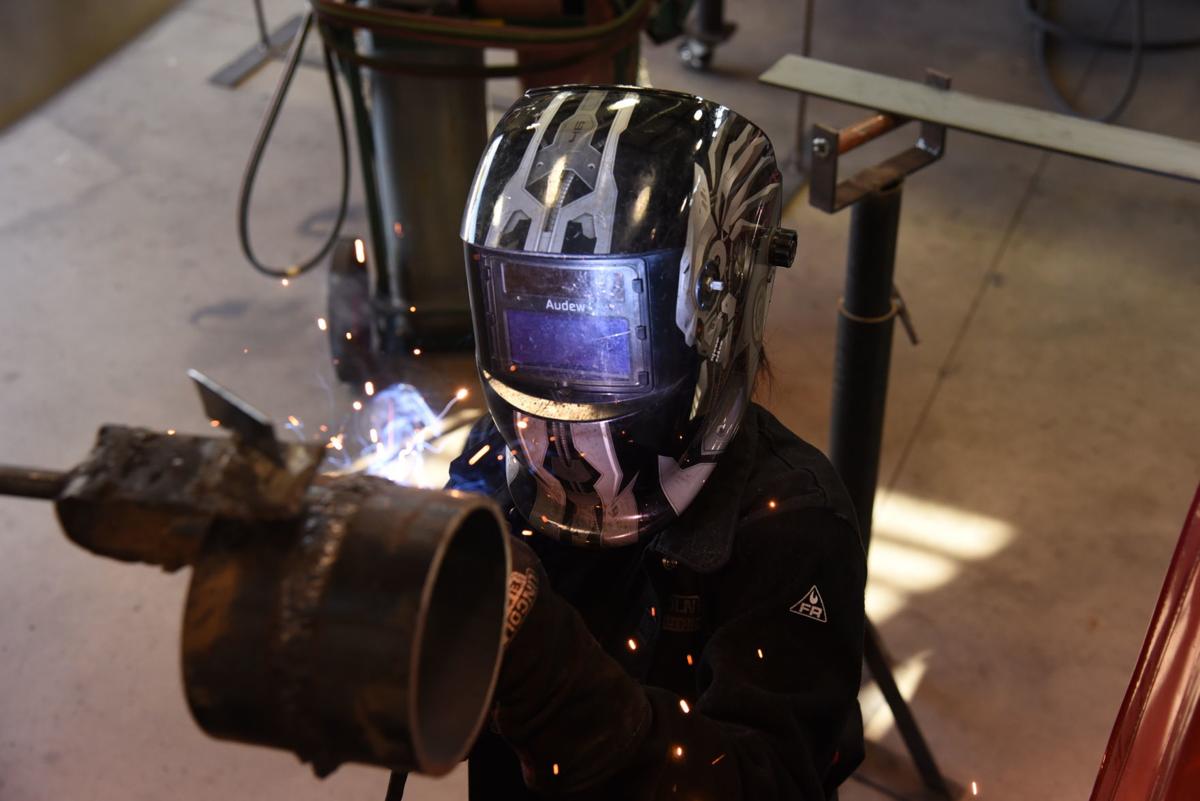 Only 5% of welders nationally are women, according to federal employment statistics. 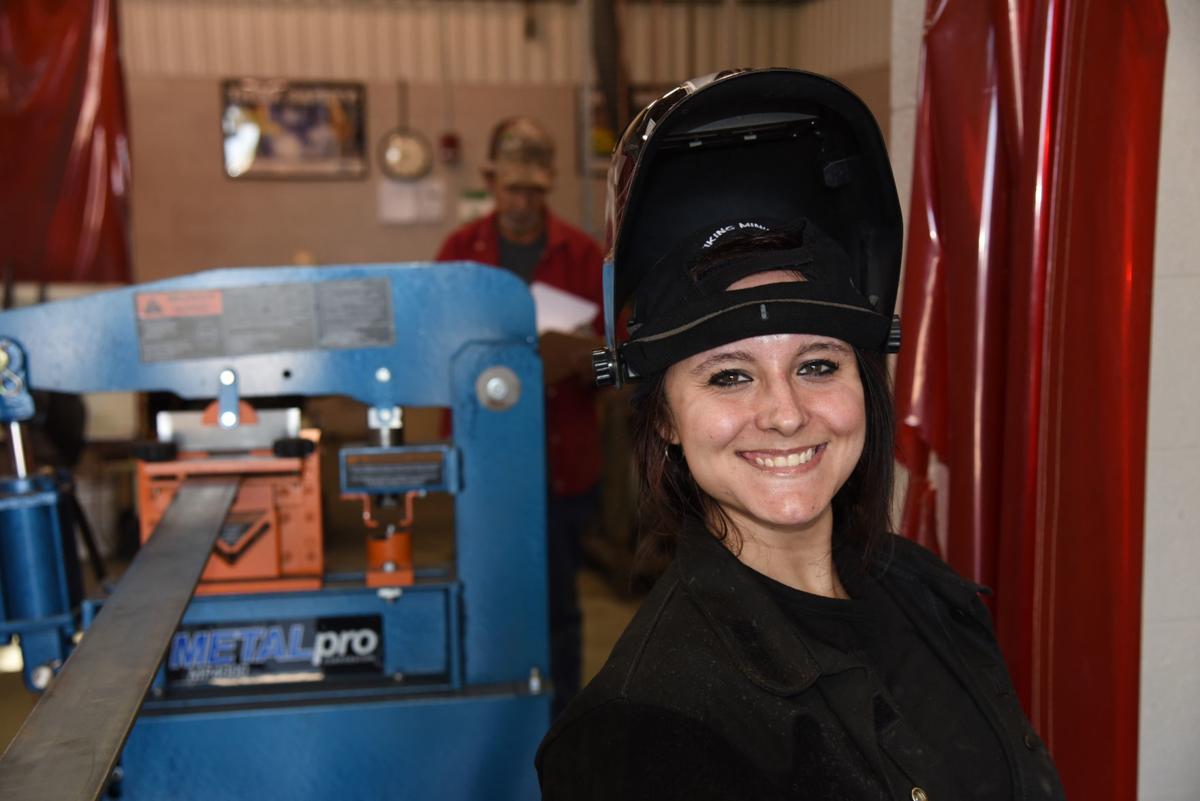 Hannah Merriman, 23, of rural Union County, was recently certified as a welder. Though a traditionally male-dominated field, Merriman encourages high school girls or women looking for a career change to give it consideration.