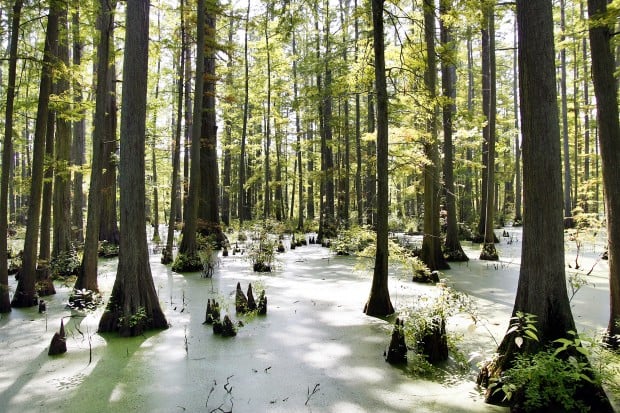 Steve Jahnke / The Southern Located near Belknap, Heron Pond is part of the Cache River system. The swampy area is filled with cypress and tupelo trees. 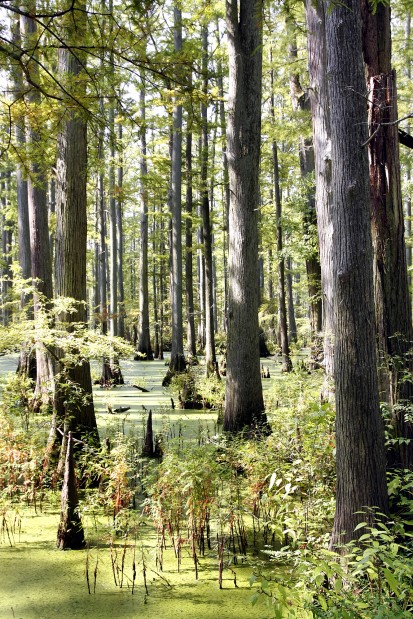 Steve Jahnke / The Southern Located near Belknap, Heron Pond is part of the Cache River system. The swampy area is filled with cypress and tupelo trees.
BY ADAM TESTA, The Southern

Starting at the northern state line between Illinois and Wisconsin and driving to the southern tip, a traveler can watch the surrounding landscape shift and change before his or her eyes.

Leaving the densely populated metropolitan area of the Chicagoland area, the drive gives way to a vast stretch of flat land, cornfields and single-stoplight towns.

Once past Effingham and Mount Vernon, things really begin to change. By the time one hits the Carbondale-Marion area, the landscape truly takes on a new shape and life of its own.

"Southern Illinois is a bit different than most of the rest of the state," said James Conder, an associate professor of geology at SIU Carbondale. "Looking north gives you a much different perspective than looking south."

The secrets of Southern Illinois' rolling hills, the Shawnee National Forest and the magnificent wonders of the Cache River wet-lands lie beneath the surface and millions of years in the past. The geological history and evolution of not only this region but the entire world has helped shape Southern Illinois into its modern form.

But just what causes the southern part of the state to be so different than the northern reaches, only hundreds of miles away? The answer comes in the form of a geologically defined boundary, the Illinois Basin.

This bowl-shaped dip in the landscape contains sediments traced to the Paleozoic Era, between 550 and 300 million years ago and before dinosaurs walked the earth. Southern Illinois marks the farthest-reaching end of the basin, and as such, several geologic elements and sediments merge together in the region.

The differentiation between northern and Southern Illinois can also be traced to the Illinoisan glaciation about 150,000 years ago. Once again, this region became the southern boundary for that natural, geological occurrence, but the topography of the rest of the state wasn't so lucky.

"It basically mowed over everything to the north and flattened it," Conder said.

A second glacial movement came across the state again about 15,000 years ago, but it didn't stretch as far or leave nearly the ramifications of its predecessor.

Other geological designations of note also exist in Southern Illinois. From the New Madrid and Wabash fault systems - potentially caused by different rifts in the continental plates as much as 500 million years ago - to the Mississippi Embayment, which runs from the Gulf Coast up to Southern Illinois, there are a variety of factors at work.

The Mississippi Embayment brings a little bit of the climate conditions of the Gulf region to Illinois. In this region, the result is the swampy terrain of the Cache River wetlands in deep Southern Illinois.

Sediments showing evidence of marine life have also been uncovered in the region. During the Paleozoic Era, when the Illinois Ba-sin was forming up north, it's likely an ocean stretched across the mainland and reached today's Southern Illinois.

Because the terrain of the continents has shifted so much, this ocean can't be related to one of the modern ones. But Conder said this region would have been located much closer to the equator during that time period, which when combined with the ocean presence has left a lasting impression of its own.

Those combined conditions would have caused peat to develop, and that peat would eventually become coal, which continues to be mined and harvested in Southern Illinois. The same can be said of oil and natural gas.

"You can definitely still see the effects today," Conder said.

Steve Jahnke / The Southern Located near Belknap, Heron Pond is part of the Cache River system. The swampy area is filled with cypress and tupelo trees.

Steve Jahnke / The Southern Located near Belknap, Heron Pond is part of the Cache River system. The swampy area is filled with cypress and tupelo trees.
© Copyright 2021 The Southern Illinoisan, 710 N. Illinois Avenue Carbondale, IL | Terms of Use | Privacy Policy
Powered by BLOX Content Management System from TownNews.com.
You don't have any notifications.