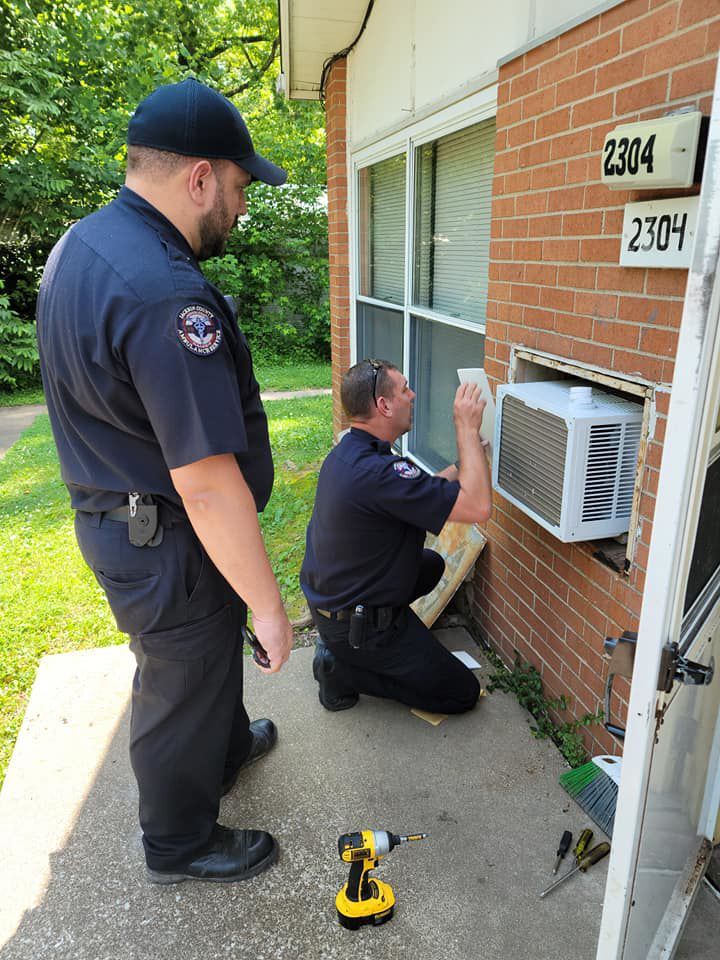 Jackson County Ambulance Capt. Jeff Dawley looks on as Gerald Daniel installs an air conditioner in a home in Murphysboro Saturday. The unit, purchased by the Jackson County Sheriff's Department Fraternal Order of Police lodge was given following a report of an infant who had overheated. 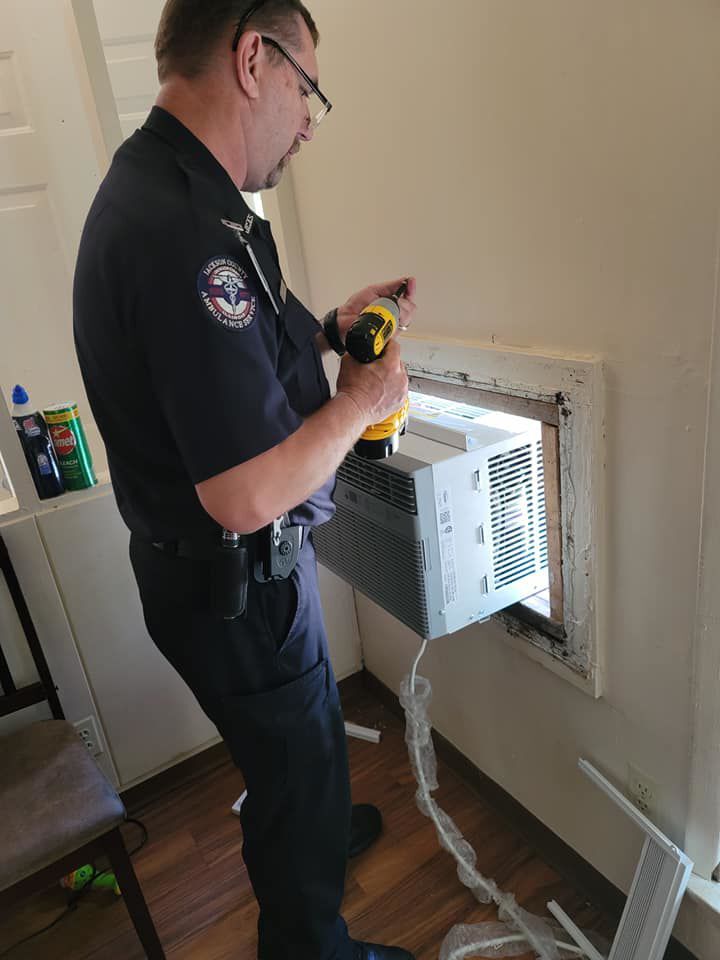 MURPHYSBORO — Asia Woolridge noticed on Saturday morning that her infant son – just two weeks old – was hot to the touch.

“It was just too hot in the house,” Woolridge said about the apartment, which lacks air conditioning, as the thermometer was climbing into the low 90s.

Unable to get her son’s temperature down and noticing he was having difficulty breathing, she called 911. Jackson County Ambulance Service paramedics Rebekah Erwin, Amber Skinner and Capt. Jeff Dawley responded, providing treatment and transporting Woolridge and her son to a local hospital.

But they didn't stop there.

Dawley knew the fans would not be sufficient, especially with the summer just beginning. He quickly set about a way to keep the Woolridge family cool. He began by talking with Jackson County Ambulance Service Chief Kenton Schafer.

“He contacted me and told me, ‘We had this call and I feel really bad. It was super hot in there,’ then he started asking me if I knew of any charities that would donate an air conditioner to the family,” Shafer said.

Schafer said Dawley volunteered to purchase a window air conditioning unit himself, but the two agreed to first seek out help. One of their initial calls was to the Jackson County Sheriff’s Department.

Patrol Sgt. Ronald Stanton offered the assistance of the department’s Fraternal Order of Police lodge, where he serves as president.

The organization would pay for an air conditioner if Jackson County Ambulance staff members could install it.

A deal was struck and a call to the Murphysboro Rural King store resulted in an air conditioner, purchased at a deep discount, for Asia Woodridge and her family.

Within a few hours, installation was underway as the Saturday morning temperatures began to climb.

“It all fell into place,” Shafer said.

When Woolridge returned home from the hospital, she was surprised to see the air conditioner.

“I was excited because it wasn’t going to be hot anymore,” she said. “It was wonderful.”

“Had it not been for Jeff’s forethought and his interest in the community, this never would have happened," Shafer said.

Schafer said Dawley, who is out of the area on vacation, would not have wanted any accolades for his efforts.

“He told me that he didn’t do this for any publicity or attention, but rather it just shows that we do more than pick people up and take them to the hospital,” Schafer explained.

Brigitta Mac-Rizzo, executive director of Jackson County Housing Authority said she is grateful for the level of caring shown by the community.

“I think this is fantastic. It’s wonderful that they chose to assist our resident with an air conditioner,” she said.

Mac-Rizzo said many of the agency’s rental units do not have central air conditioning and residents are responsible for their own cooling units, but Jackson County Housing Authority is looking into ways to provide air conditioners in the future.

Bob Palmer, policy director of Housing Action Illinois, a not-for-profit housing advocacy group, said while housing authorities in Illinois do not have to provide air conditioning, he would like to see that change.

“Unfortunately, there is no federal requirement that public housing areas have to have air conditioning,” he said. “Much of public housing is older and historically, it has been underfunded.”

Palmer said his organization is pushing Congress and the state legislature for higher levels of infrastructure funding for public housing.

Woolridge explained that she has wanted an air conditioning unit for some time, but the COVID-19 pandemic made affording one difficult. She said she is not concerned about higher energy bills. Instead, she is grateful for the new air conditioner.

“It used to get so hot in here, but now we can all stay cool. I want to tell everyone thank you for helping me; I appreciate all of your help,” she said, adding that her son is doing fine.

Schafer said his staff appreciated the opportunity to know that they were making a difference.

“Unfortunately, we usually only get to help people by trying to make them feel better or managing their wounds, encountering them on their worst day, and then we don’t have an opportunity to follow up with them,” he said. “This project was more than that and it is all about trying to put the right people in contact with the right people and get things done.”

City officials have released details about a construction timeline to replace the former car dealership that's served as police headquarters since the 1970s.

Jackson County Ambulance Capt. Jeff Dawley looks on as Gerald Daniel installs an air conditioner in a home in Murphysboro Saturday. The unit, purchased by the Jackson County Sheriff's Department Fraternal Order of Police lodge was given following a report of an infant who had overheated.