COBDEN — A Red Cross quilt made in 1918 in Cobden has been returned to Cobden and will be displayed in Union County Historical and Genealogy Society Museum through September.

Judy Travelstead, of the Cobden Union County Historical and Genealogy Society, said the 102-year-old quilt is a signature quilt, which were a popular way of raising funds for worthy causes back then.

“The procedure was a person would sign his or her name in pencil along one edge of a quilt square. A volunteer quilter would then embroider over the signature, making it permanent,” Travelstead said.

The cost to sign your name on the Red Cross quilt was 25 cents. Once the quilt was finished, it was raffled off for 10 cents a ticket.

The winner was a young woman named Hester Whitaker, who grew up in Cobden. Whitaker and her family moved from Union County to Chicago in 1930 because of the Great Depression. She kept the quilt throughout her life. When she died in 1995, the quilt was handed down to other family members and eventually to her granddaughter, Joy Kleber, of California.

Kleber realized the quilt is an invaluable piece of Union County history. She contacted Union County Historical and Genealogy Society and made arrangements to donate the quilt to the Union County Museum.

“She decided it should be some place where it belonged, so it should come home to Cobden,” Travelstead said.

The quilt has 759 names of primarily Cobden and Alto Pass area residents embroidered in red on white squares. In addition, there are 10 groups or organizations memorialized in red embroidery on white squares. Each square is 5 inches by 5 inches with a red fabric cross sewn in the middle. The names are on the edges of the squares. A larger red cross dominates the middle of the quilt.

Who can play? Rules leave it to the school district as far as extracurricular eligibility goes

Organizations that purchased blocks included the MWCC, which stood for the Merry Wives Cooking Club; the HGL Club, which was the Happy Go Lucky Bridge Club; the Masons and the Eastern Star; the Jolly Dozen Club; the Rose Maple Club of Domestic Science (now the Cobden Womens Club); names of the members of the Cobden village government; the quilt committee; Cobden branch of the American National Red Cross; and the president, Woodrow Wilson, and some members of his cabinet. Officers of the individual clubs were listed on their respective blocks.

Since the historical society lacks local Red Cross records and access to the 1918 Cobden newspaper, they have been unable to completely document the making of the quilt. However, in the Winter 2017 issue of The Saga of Southern Illinois, a publication of The Genealogy Society of Southern Illinois, Darrell Dexter chronicles all of the items pertaining to World War I that ran in the Jonesboro Gazette from 1914 through 1919.

The March 1, 1918, issue of the Jonesboro Gazette contained a news item announcing that the Jonesboro Chapter of the Red Cross was sponsoring fundraisers including the making of a quilt. The story said that everybody could have their name embroidered on the quilt for the small sum of 25 cents.

Chances to win the quilt with its 848 paid names cost 10 cents. The quilt was given away at the Red Cross benefit concert at the Union County Courthouse in Jonesboro on April 2, 1918, and Miss Wilda Smiddy had the winning ticket.

“We can only assume that the Cobden Red Cross Chapter followed the same pricing structure for the quilt created in Cobden since most everything follows the same pattern as the Jonesboro quilt,” Travelstead said.

Southern Illinois businesses attempt to bounce back from pandemic economy

Across Southern Illinois, small businesses have faced unprecedented challenges. Many have weathered financial upheaval and grappled with outbreaks. And many repeat a common refrain: Will this ever end? 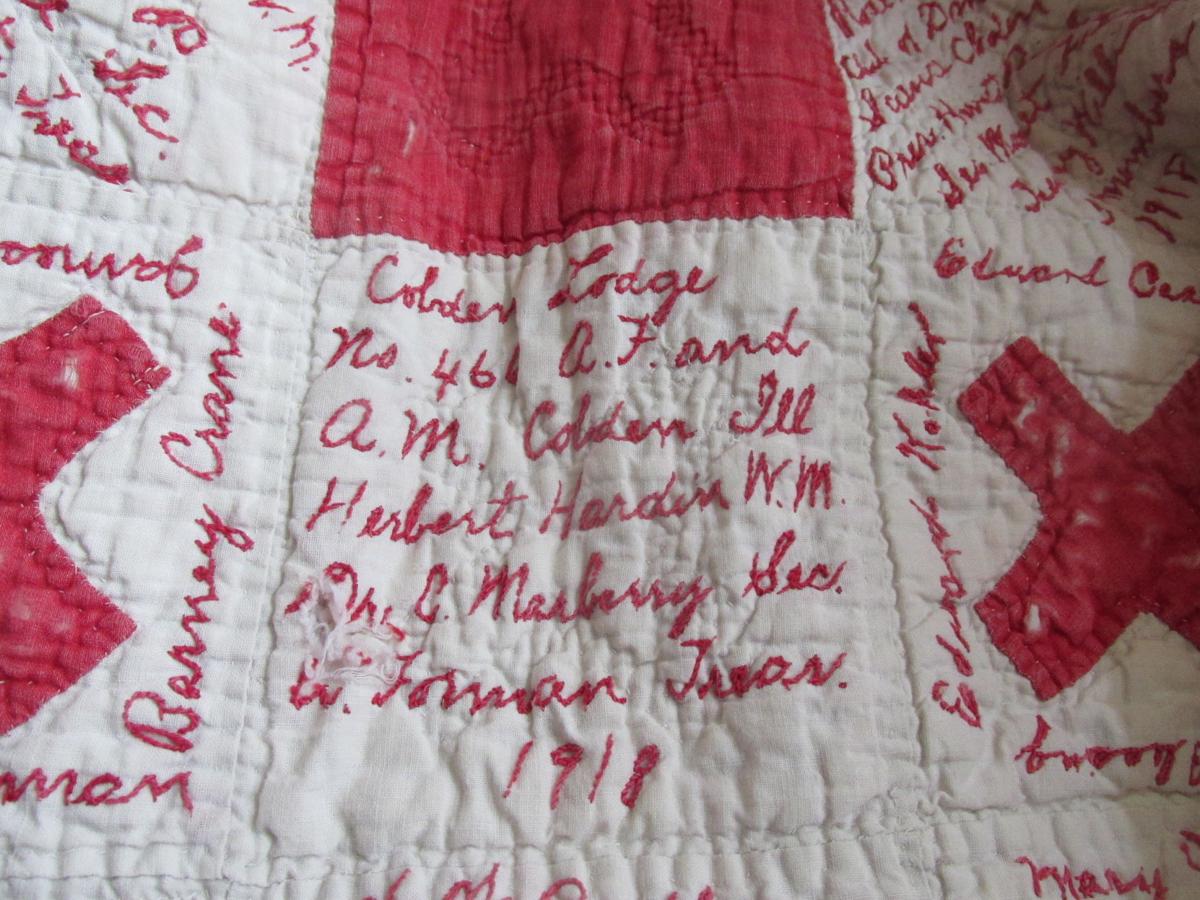 This red and white quilt was recently donated to Union County Museum in Cobden and will be displayed through September. 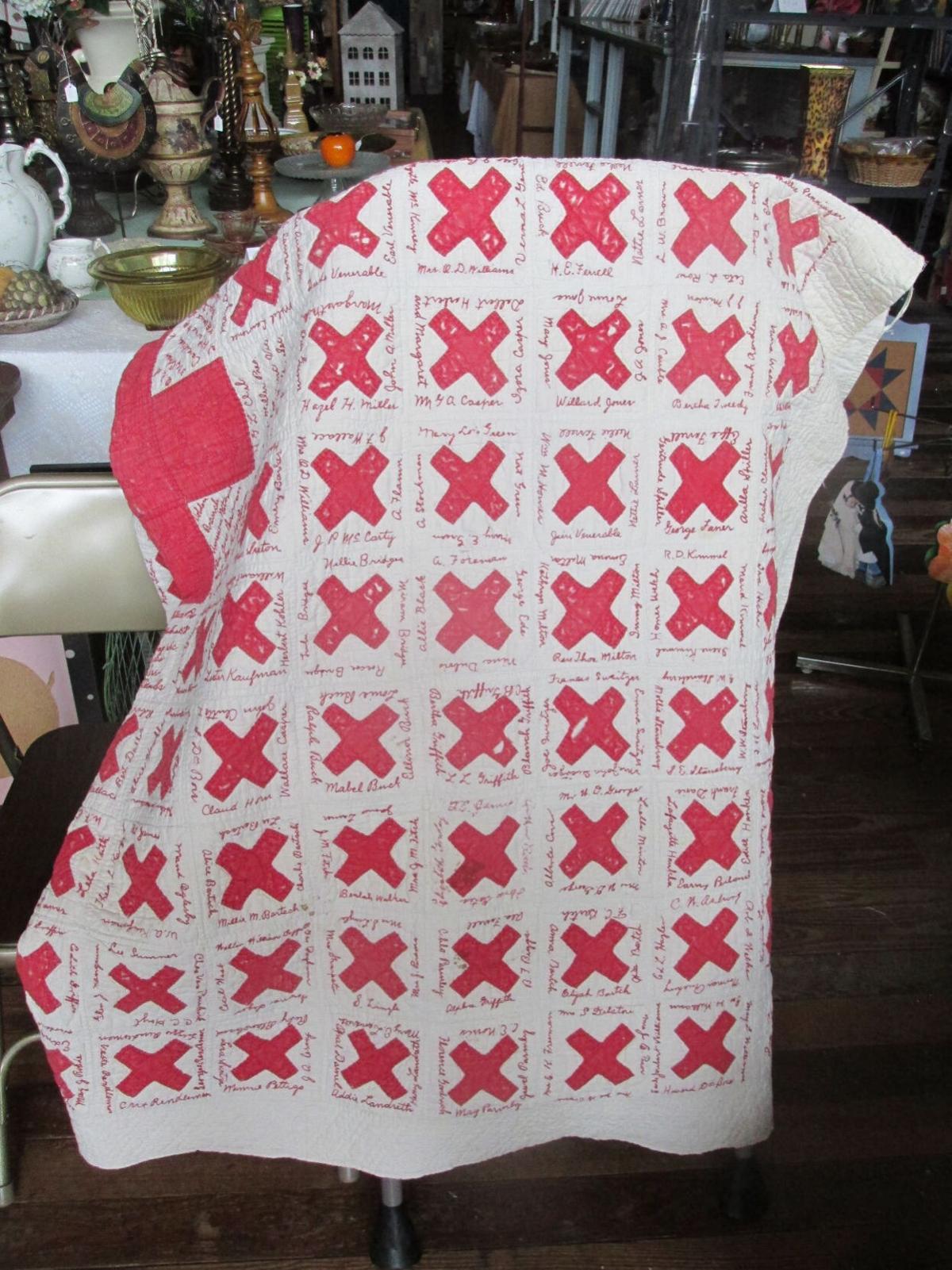 A signature quilt created in 1918 to raise funds for Cobden branch of the Red Cross during World War I is on display at Union County Museum through September.