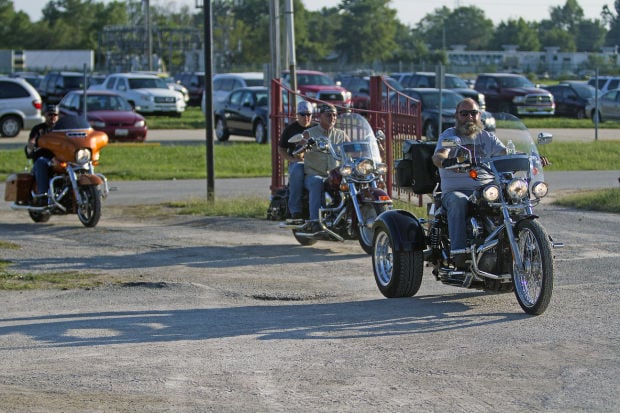 Participants of the Disabled Veterans poker run arrive at their final stop Sunday at the Du Quoin State Fair. 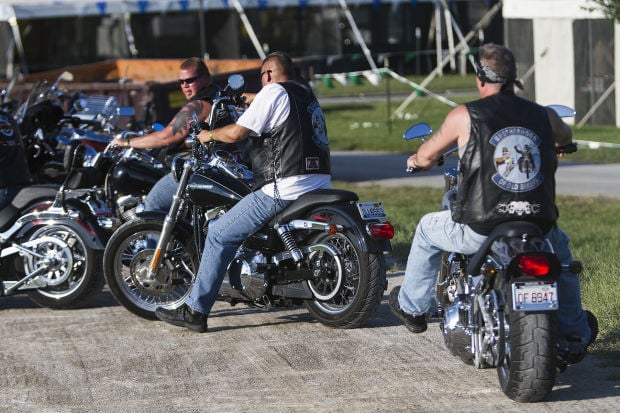 Members of the Brotherhood of Old Bikers arrive at the final stop for the Disabled Veterans poker run Sunday at The Du Quoin State Fair. 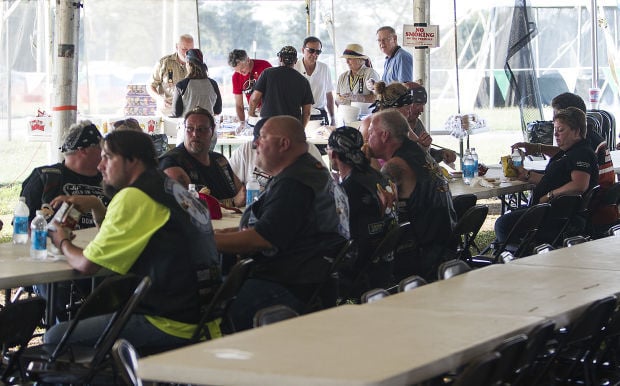 The Disabled Veteran poker run Sunday ended with a dinner of hot dogs and hamburgers in the VIP tent at the Du Quoin State Fair.

Sarai Ekblad, a veteran from Marion, intentionally tapped her foot on the ground as a nervous person might as her beautiful Labrador retriever, Ace, gently pawed at her ankle.

Ace was letting Ekblad know that she was potentially showing warning signs related to post-traumatic stress disorder as Ekbald demonstrated one of the ways her service dog helps her cope with PTSD.

“It’s made a big difference,” she said. “Part of the reason I ended up contacting This Able Veteran is I found out when I was away from him (Ace) I really realized how bad my PTSD was.”

This Able Veteran is a Carbondale-based nonprofit that provides injured veterans high-quality service dogs. The organization will receive a boost thanks to a charity “poker run” sponsored by the Brotherhood of Old Bikers Sunday that started and ended at the Du Quoin State Fairgrounds.

According to the organization’s website, This Able Veteran trains service dogs to interrupt the cycles of PTSD and Traumatic Brain Injuries and to support veterans with mobility issues.

“First, we shape the skills needed in dogs,” says informational material from the organization. “Then, over the course of several weeks, we help the dogs and veterans learn to recognize each other’s signals and to form a bond strong enough to carry the veteran through the challenges of recovery.”

Pam Largent is president of This Able Veteran.

“It’s important to us because there are so many young veterans coming back with PTSD,” she said Sunday.

Largent said the organization also helps veterans from Vietnam and other wars who suffer from PTSD, but who were perhaps not properly diagnosed when they returned home. “It was more suck it up and do what you need to do,” she said of that era.

Laregent said dogs are generally trained from a young age to “alert veterans when they’re getting ready to have an episode of PTSD.”

While Ekblad was able to have her own dog trained, that is rare. Ekblad said she began researching the organization after, while riding on a train with her mom, she heard a noise and instantly got under the table.

“My mom thought I was joking but I was totally serious,” said Ekblad who served from 2009 to 2013 in the Army. She said her PTSD is not combat related.

The whole program, she said, has helped her move on with her life.

Jimmy Ellis, president of the Brotherhood of Old Bikers, said, “I hope we do well for them.” Ellis said his goal was to sign up about 100 bikers.

Katie Houghland, of Pinckneyville, one of those riders, said it was an important cause to her because these veterans fought for our country. Her brother is serving in Iraq, and she said she did it for him, too.

Alex Jones, of Ellis Grove, who is serving in the U.S. Navy Reserve, called This Able Veteran a “fantastic cause.”

“I don’t think we can -- as a community -- can help our veterans enough,” he said. “I think this cause right here is exceptional with the animals that are involved. It just touches you right in the heart.”

Downtown businesses and other organization are banding together to promote Destination Pinckneyville, an effort to revitalize the city’s business district.

Participants of the Disabled Veterans poker run arrive at their final stop Sunday at the Du Quoin State Fair.

Members of the Brotherhood of Old Bikers arrive at the final stop for the Disabled Veterans poker run Sunday at The Du Quoin State Fair.

The Disabled Veteran poker run Sunday ended with a dinner of hot dogs and hamburgers in the VIP tent at the Du Quoin State Fair.