BLOOMINGTON — A state mental health facility provided a Bloomington man with toxic levels of his medication and staff also choked him, according to a state investigation.

Lavonte Rayford, 25, had three of his medication doses increased and another was stopped without reason during his two-week stay at the Chester Mental Health Center, in southwest Illinois, in August 2019, according to the report by the state Human Rights Authority.

Officials for the medical center did not immediately respond to questions from The Pantagraph.

Rayford has epilepsy, and his mother, LaTasha Rayford, told The Pantagraph he had been wrongfully diagnosed with a mental health disorder.

The report, released this spring, details how Chester staff placed Rayford in a chokehold, then “body slammed” him into a bed after an argument ensued over him not complying to remove a towel from his head, which he wore to cover burn scars.

One security aide then told Rayford, “What you gotta say now?,” the report said.

Lab results from a private physician later showed Rayford had Dilantin toxicity from receiving too much of that medication. Side effects of that include tremors, lack of muscle control, trouble swallowing, altered mental state, seizures and coma. 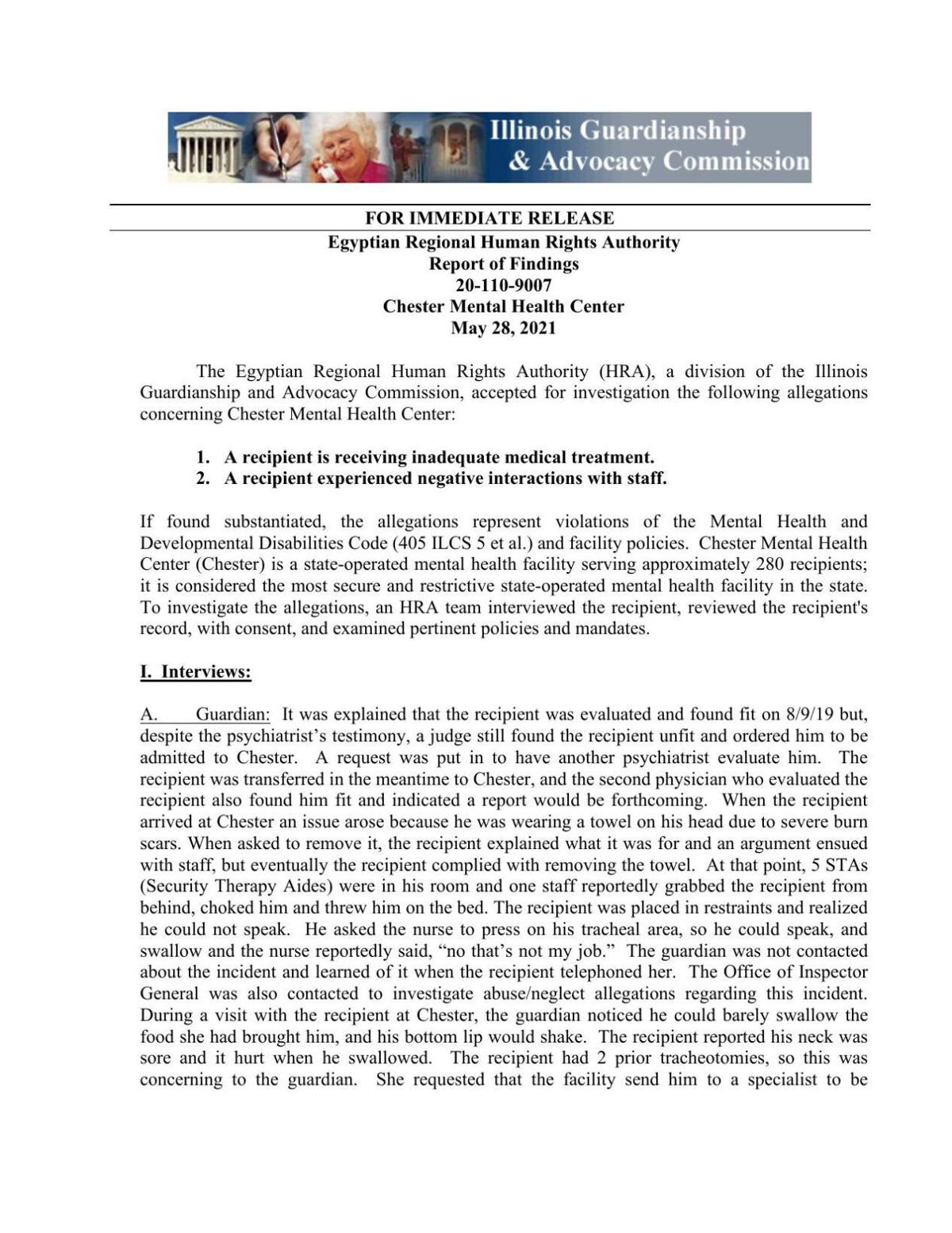 He also was diagnosed with a neck muscle strain and trauma of neck tissue from being choked. The trauma to his airway required surgery, his mother said. She also was not notified of the incident until Rayford told her.

Rayford said he could not swallow or speak after being choked, the report said.

The Rayford investigation found the inadequate medication treatment allegation to be substantiated. The report recommended Chester medical staff to be retrained on proper medication documentation, and to provide reasons why medication changes are made.

The second allegation of negative staff interactions was found unsubstantiated in the report despite a psychiatrist documenting abuse following Rayford’s discharge from Chester.

“It is hard to determine from the record if the trouble swallowing was a result of abuse by choking, Dilantin toxicity or for some other reason,” the report said.

The report further recommended Chester Mental Health Center staff to be retrained on its code of conduct policy, and to “be reminded that all patients, employees and visitors be treated with dignity, respect and courtesy.”

This was the second time within a year that Rayford was the subject of a Human Rights Authority report detailing misuse of his medication.

The first report, released in May 2020, found that McLean County jail staff failed to provide Rayford with two doses of his seizure medication, leading to him having three seizures and suffering a “serious injury” to his eye after falling and hitting his head.

His jail stay came after aggravated battery charges for throwing liquid at a nurse, but all of his charges have since been dropped.

He was admitted to Chester Mental Health Center under a court order despite a psychiatrist testifying that Rayford was fit to stand trial.

A second evaluation found Rayford was fit to stand trial, too, following his admittance to Chester.

'Known for living on the edge': Peorian remembered after fatal accident on Illinois River

From minibikes to watercraft, Rex Monroe loved engines and speed.

A fire at the grocery store was reported just before 4 a.m. when a caller said they saw flames coming from the building at 713 Pulaski St.