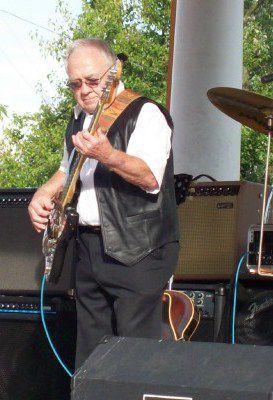 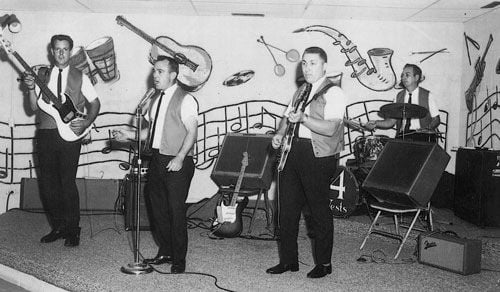 The Four Vests, Vernon Mandrell (left to right), Gabe McCarty, Kenny Welch and Burley Bowlin, are pictured during a performance. 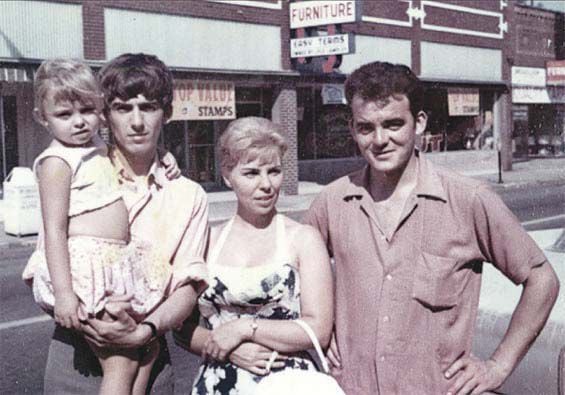 When Gerald “Gabe” McCarty first started playing the bass guitar in 1958, people called him “One String Gabe.” That’s because his bass parts were so simple that he generally just stuck to one string.

But the Benton native, who died July 3 at the age of 83, eventually shed the moniker and became widely known as a skilled player with an impressive musical résumé: He’d befriended George Harrison just months before the Beatles exploded into international fame.

“George Harrison once referred to Gabe, (speaking) to the other Beatles, as his ‘American friend,’” said Jim Kirkpatrick, author of “Before He Was Fab: George Harrison’s First Visit to America.”

It all began in September 1963, four months before the Beatles’ appearance on “The Ed Sullivan Show” turned them into a household name in the United States. Harrison was visiting his sister, Louise Caldwell, who lived in Benton with her husband.

“At the time when he came over here, nobody really knew who George was,” Kirkpatrick said.

In those days, McCarty was the leader of a band called The Four Vests, a rock ’n’ roll outfit that played regularly at local venues and teen towns. On Sept. 28, 1963, Caldwell brought her brother to the Eldorado VFW to see them.

According to Kirkpatrick, who conducted extensive interviews in his research, the group roped the reluctant Harrison into joining them by saying that their lead guitar player needed to take a break. When Harrison took the stage, the effect on the crowd was instantaneous.

“Everybody was talking and eating and drinking, and occasionally people would get up and dance, but they weren’t really that into the music, you know. But (Caldwell) said when (Harrison) performed, it was like they threw a switch in that room. The difference was that dramatic,” Kirkpatrick said. “All of a sudden people started clapping and cheering, and she said that she thought in the back of her mind that if he, as one person, could do that much to change the environment in that room, she imagined what the four Beatles would be like.”

Harrison wanted to play American songs, like “Your Cheatin’ Heart” by Hank Williams and “Johnny B. Goode” by Chuck Berry. McCarty and the others complied, and they blazed through about half a dozen numbers. After the performance, Harrison and McCarty became fast friends.

McCarty took Harrison to Fenton Music in Mount Vernon to buy a new guitar, and Harrison settled on a 425 model solid-body Rickenbacker, which cost about $400, Kirkpatrick said. Harrison later used the guitar to record “I Want to Hold Your Hand,” the Beatles’ first No. 1 single on the U.S. charts. (The guitar fetched $657,000 in a 2014 auction.)

“All the people my age, who were born in the '50s and grew up in the '60s (listening to) the Beatles, after watching ‘The Ed Sullivan Show,’ we decided that that’s what we wanted to do for the rest of our lives. For him to have had a part of that, that was the special thing about Gabe. And he was very humble about it,” Rea said.

In August 1965, Harrison invited McCarty up to Chicago to see the Beatles in concert at Comiskey Park, where he introduced him to Paul McCartney, John Lennon and Ringo Starr. When McCarty complimented Harrison’s trademark Beatle boots, Harrison took them off and handed them over.

But the next morning, Harrison asked for the pair back — his manager said they didn’t have any extras in his size.

“For one night, at least, (McCarty) had George Harrison’s Beatle boots, which would have been worth hundreds of thousands,” Rea said.

Perhaps a year later, Harrison called McCarty in the middle of the night. He’d just gotten done playing a show in Cincinnati, he said, and he wanted to see how McCarty was doing.

“George had actually invited Gabe to come over to England and see the music over there, and of course he never did. He said, you know, after the Beatles got really big, it was just a totally different world,” Kirkpatrick said.

Rea says he thinks the friendship, nevertheless, had a profound impact on Harrison.

“Of course, they parted ways with time and distance, but just to think that Gabe had an influence — and George, on many occasions, talked about the kindness that was shown to him and the hospitality of the Americans. So his opinion was formed by meeting people like Gabe McCarty,” said Rea.

“As Louise said, it was the one time in Southern Illinois when a Beatle could walk free and easy without anybody really bothering him or intruding on (his) privacy or anything like that,” Kirkpatrick said. “And it was just a relaxing time for George, before Beatlemania erupted. I think George had fond memories of being here.”

Rea, who got to know McCarty while working at Beatty’s Music Plaza in Benton in the late '60s, says Southern Illinois has lost a seasoned musician.

“He flawlessly played his instrument. I’m also a bass player, so I watch bass players,” Rea said. “There’s two things about being a musician. One is being good, which he was. And the other is being able to be a functional part of a band or a group, and he was just an overall good person who really enjoyed playing.”

McCarty was a veteran of the United States Air Force, having served in the Korean War. He was a retired sheet metal worker at SIU.

Funeral services were held last Friday in Benton. McCarty is survived by a son, a daughter, several grandchildren and one great-grandchild.

Inside some of the world’s most unusual vaccination centers

What the Colonial Pipeline Hack Means for Fuel Supplies

What the Colonial Pipeline Hack Means for Fuel Supplies

Region lost some notable residents in 2016

The Four Vests, Vernon Mandrell (left to right), Gabe McCarty, Kenny Welch and Burley Bowlin, are pictured during a performance.