In 1986, Donald Elkins was faced with enrollment decline as an assistant dean at Southern Illinois University Carbondale's School of Agriculture.

Not only were fewer students attending SIU every year, the numbers for agriculture programs — both at his university and at other ag schools across the country — were also slipping.

He needed to entice students not only to pursue agriculture but to do so at SIU.

Elkins realized the answer was all around him. Who better to recruit future students than current students? He began an effort to identify, in his words, “the cream of the crop” and, in selecting ten students, sent them into the field to attract new students.

Elkins called his new organization Agbassadors – a blend of the words agriculture and ambassador. At the time, he likely did not realize the impact the group would have on SIU’s agriculture program, the university as a whole and agriculture colleges across the country.

The impact of the group continues 35 years later.

Not only was the program successful in boosting enrollment, it has become a model for student-to-student recruitment efforts around the country.

“When SIU started its ambassadors, there were only two other schools that I recall using students as recruiters,” Kirby Player, director of Palmetto LEAF, a leadership program in the College of Agriculture, Forestry and Life Sciences at Clemson University.

Player, who was instrumental in developing a similar program at his institution in the late 1980s, said the "Salukis in Carbondale" were one of the first to lift the bar in recruitment for all agriculture programs.

Today, dozens of agriculture colleges nationwide have programs similar to Agbassadors. Likewise, as increasing enrollment has become a goal across all academic units, other SIU departments have taken agriculture’s lead.

“We consistently get questions from other programs on campus wanting to model their student ambassador programs on what the Agbassadors have done through the years,” explained Susan Graham, senior manager of communication, outreach and recruitment for the SIU College of Agriculture, Life and Physical Sciences.

Graham has worked with the program for many years continuing what many consider to be Elkins’ legacy. He left SIU to become dean of agriculture and human ecology at Tennessee Tech University in 2013, where he started an ambassador program as well. He died in 1995. An SIU scholarship for Agbassadors is named in his honor.

While the exact role and duties of Agbassador members has evolved over three-and-a-half decades, the focus of the organization has not. From the beginning, giving prospective students a current student’s take on college and SIU's campus has been key.

Like many SIU agriculture students, Taylor Hartke, a senior studying agricultural communications from Teutopolis, said the Agbassadors were instrumental in her choosing SIU.

“When an Agbassador came to my high school and did a presentation in my ag class, I really appreciated a student’s perspective and being able to ask them questions,” Hartke, who now serves as an Agbassador herself, said.

Presentations at high schools throughout the Midwest have been a staple of the program, along with leading tours of the campus and University Farms to visiting prospective students. The group also represents SIU at FFA conventions and contests, major agricultural events as well as telephoning and writing admitted students.

One of the first students recruited by the group recalled his experience first as a high school student and later as an Agbassador.

“I think back to when I was still in high school in Beardstown and I got this handwritten letter from somebody I had never met before – one of the Agbassadors,” remembered Aaron Hager, who served as an Agbassador for 1989-1990. “I was like ‘Wow. That’s interesting that someone I had never met would take the time to sit down and write me.’ It wasn’t a form letter, it wasn’t typed, it was hand-written and it made a difference.”

Graham said there is real benefit in having students reach out to other students.

“It’s a lot easier for a student who was in high school in the last three or four years to talk to a student about college. It’s more effective when the message comes from a student – from someone close to their own age who understands what they are going through. They are able to really, really talk to one another and share their stories,” she said.

“I really enjoyed the experience. It was exciting to be part of a group that was promoting the university and agriculture,” said Dwayne “Butch” Konicek who served as an Agbassador during the 1990-1991 academic year.

Konicek, who now works in financial services in the Chicago suburb of Yorkville, said group members were influencers years before the term was applied to social media celebrities.

“The program was a great experience. It taught me some leadership skills and certainly gave me confidence in public communications and speaking,” he said.

Serving 25 years later, Elizabeth Butcher recalled a similar experience to Konicek; one of not only growing enrollment, but growing her own skillset.

“It gave me an opportunity to get behind the scenes at SIU. I was able to learn a lot that most students don’t know about the university,” explained Elizabeth Butcher, a 2015-2017 Agbassador. “To be an effective recruiter, we had to be well-versed in all aspects of the college and university, so it really enhanced my college experience.”

Butcher, who works in agricultural marketing in Lynnville, Indiana, said being an Agbassador served her well.

“It got me involved and encouraged me to step out of my comfort zone,” she said. “It helped me develop the ability to start a conversation with someone I didn’t know and learn to relate to them on their level.”

Butcher and other former participants shared how they completed Agbassadors with a greater perspective.

Hager, now a weed scientist with the University of Illinois extension service, said his exposure to Agbassadors helped him identify a career path and helped him appreciate agriculture.

“It was just a great group of motivated hard-working people trying not only to get students into the college itself, but to promote and ensure – maybe even secure – the future of agriculture in Illinois and around the country,” Hager said.

Graham said more than 300 students have earned the title “Agbassador” during the group’s existence, but she hopes for many more.

“We just believe in the Agbassador program,” she said. “I hope it never goes away because it helps students, it helps the college and the university and it continues to advocate for agriculture.”

Did you know? These 32 celebrities went to SIU

Thursday was a day for Southern Illinois University's School of Agriculture to show off.

Shawnee Community College is the first college to sign-on to "Saluki Step Ahead," an SIU program designed to ease transferring to the university.

Long-time SIU faculty member Marvin Kleinau has died at the age of 92.

Biden says there won't be a gov't shutdown Friday

Biden says there won't be a gov't shutdown Friday 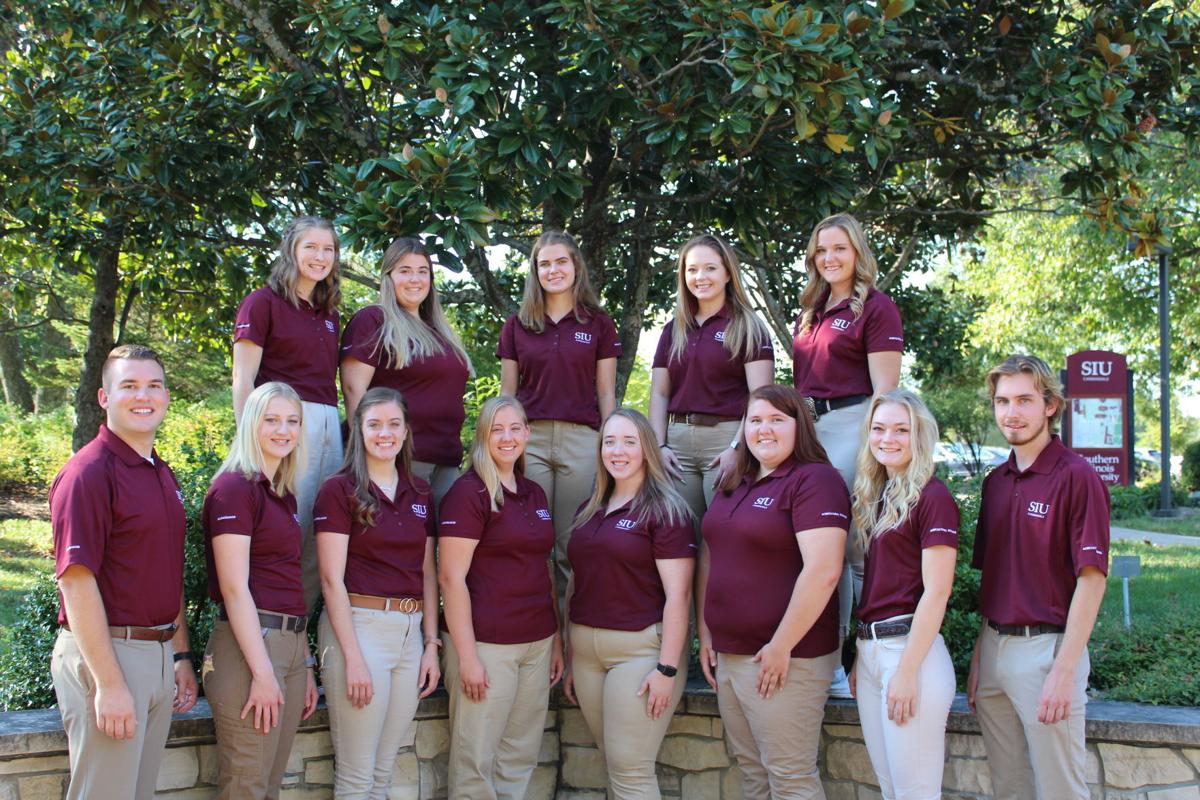 Members of the 2021-22 Agbassador team pose for a group photo outside of the Agriculture Building on the SIU campus. For 35 years, selected SIU agriculture students have served as "agriculture ambassadors," working to attract students to careers in the field and to SIU. 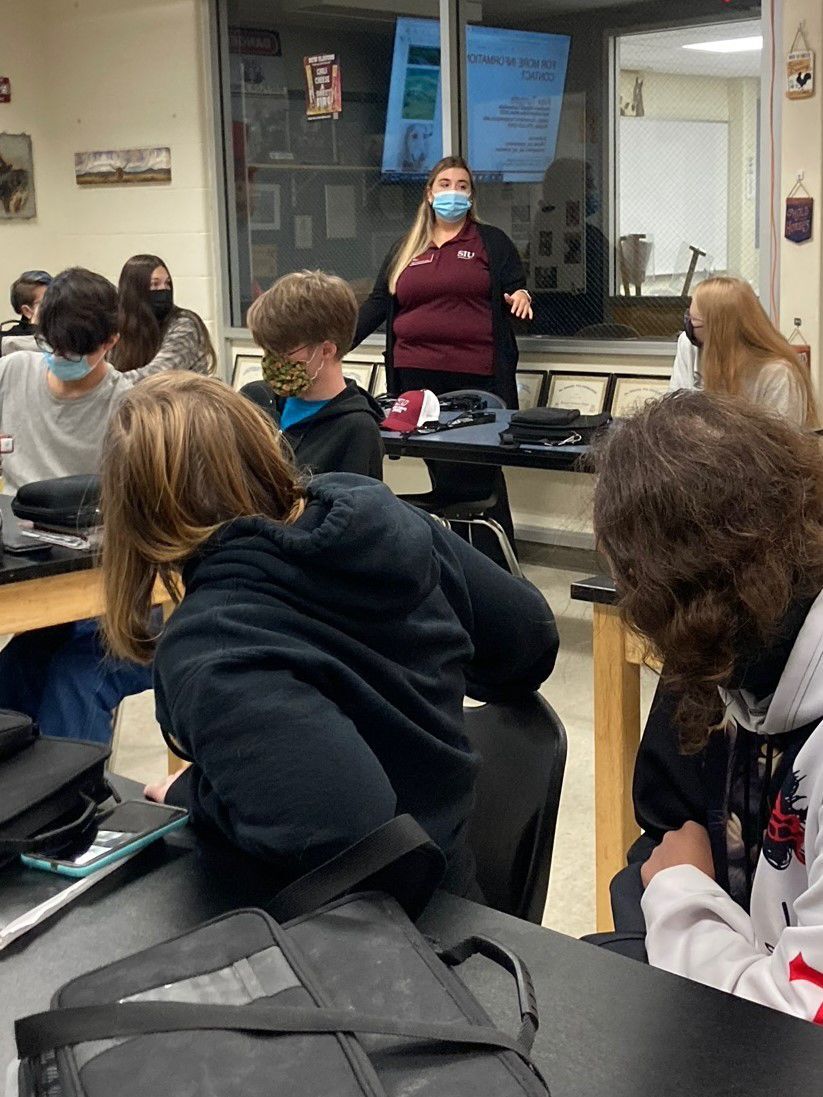 Alex Tungate, an SIU sophomore in agriculture education from Lakeville, Indiana gives a presentation about SIU and agriculture to high school students. Tungate serves as an "Agbassador," current SIU students selected to aid in recruitment efforts.
© Copyright 2021 The Southern Illinoisan, 1001 E. Main Street Professional Park #2 Carbondale,IL | Terms of Use | Privacy Policy | Do Not Sell My Info
Powered by BLOX Content Management System from TownNews.com.
You don't have any notifications.