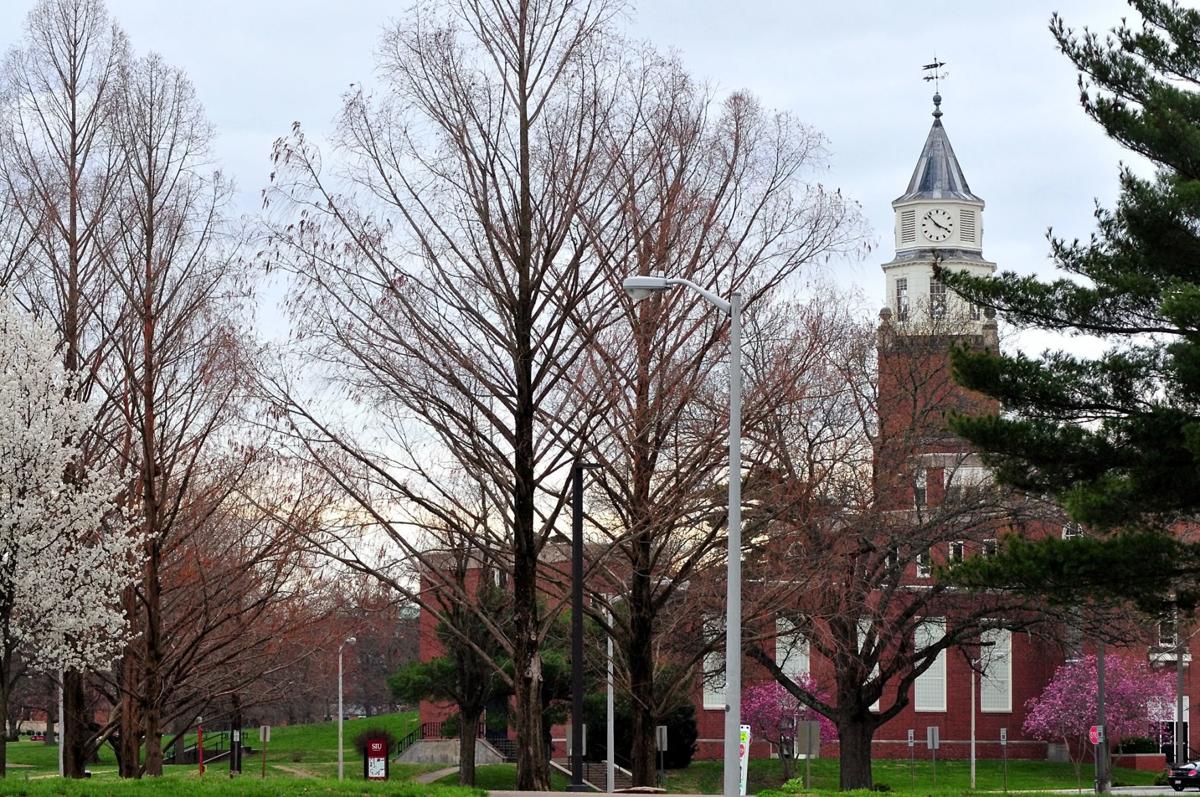 This is a springtime view of Pulliam Hall at SIU taken March 11, 2017. 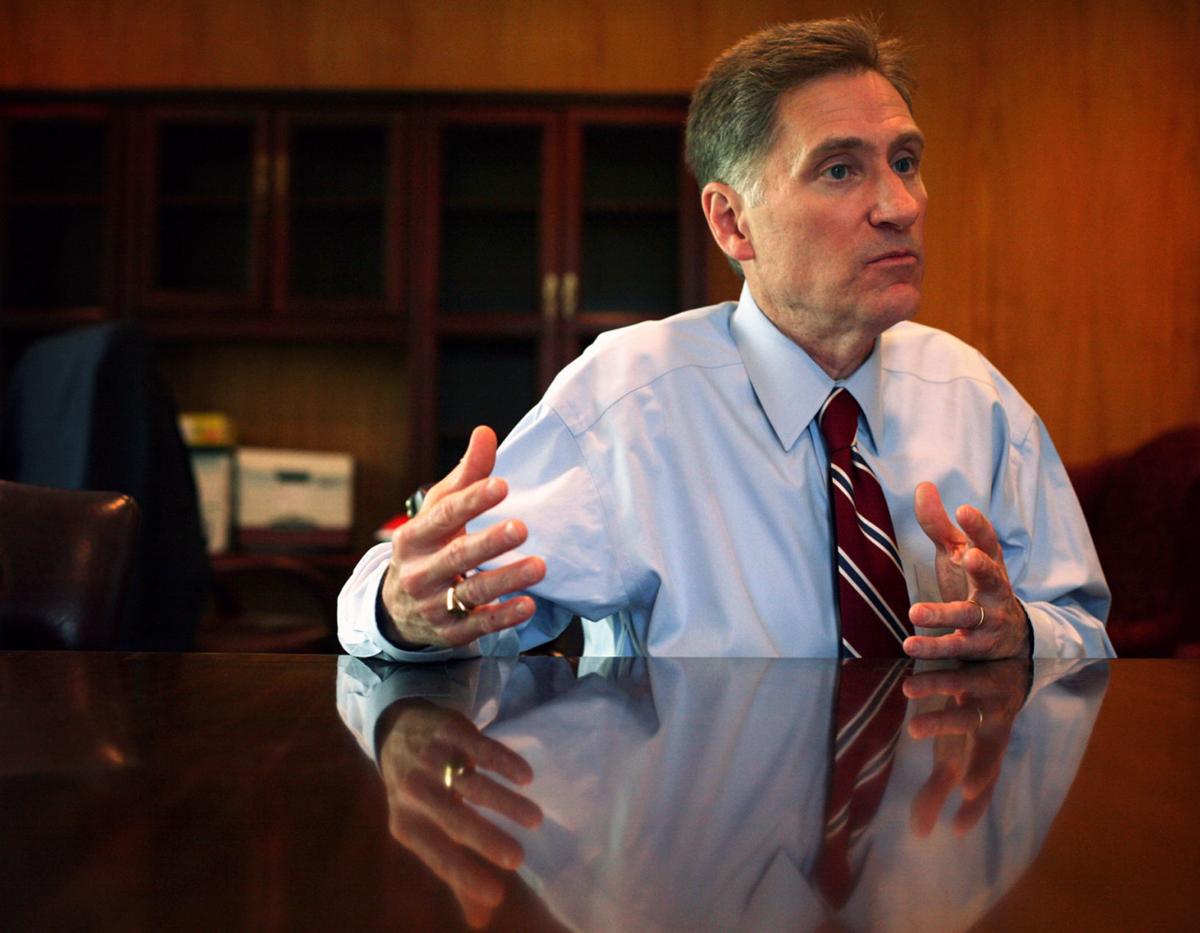 CARBONDALE — Southern Illinois University President Randy Dunn on Wednesday issued a difficult directive to the Carbondale campus to identify $30 million in potential cuts to address a structural deficit caused by a double whammy of declining enrollment and the “governmental abomination” playing out in Springfield.

The arduous undertaking has been underway for months, but Dunn, in a letter to the campus community, put a hard number to the immediate call for cuts: $30 million in cost reductions to be identified by July 1, on top of the $21 million in cuts the university previously identified.

Dunn also is planning to recommend that SIU Board of Trustees members declare a short-term financial emergency for the Carbondale campus. Dunn said that would signify that the Carbondale campus is operating in deficit mode — it will potentially dip into the red next month — and serve as a warning system to indicate that an even more serious situation could be on the horizon without corrective action.

In his letter and in an interview with The Southern Illinoisan on Wednesday afternoon, Dunn also said that the Carbondale campus may have to borrow from the unrestricted funds of the Edwardsville campus because the Carbondale campus has already tapped its own available reserves, in addition to some associated with the SIU School of Medicine. Though community colleges and K-12 schools have the ability to borrow money to make ends meet, public universities do not have that option.

“The adjustments have to get made, the decisions have to get made, to right the financial ship, to prevent getting into a situation where you have to do drastic measures such as laying off tenured faculty or closing down large chunks of the university operating system,” Dunn said.

Dunn said the Carbondale campus, under the direction of Interim Chancellor Brad Colwell, is charged with identifying the specific savings, though Dunn surmised that cuts, both short- and long-term, could include layoffs, the elimination of most positions that are budged for but unfilled, centralization of hiring, a potential reduction of departments and/or programs, and increased teaching loads for tenured faculty members no longer actively engaged in research.

Shortly after Dunn’s letter went out, Colwell issued one of his own to the Carbondale campus that was optimistic but realistic, providing further broad details about how the savings will be achieved.

While not without pain, a cut of $30 million — on top of the previous $20 million — “will not prevent us from fulfilling our core educational mission,” Colwell said, in his letter.

For some time, many people at SIU Carbondale and throughout the greater region so closely tied economically to the university’s health have wondered whether they should brace for significant layoffs.

Dunn and Colwell did not provide a specific answer to that question, though both indicated layoffs — to some unidentified degree — are likely to be part of the mix as they manage through the tenacious task of downsizing.

“There’s no way you can cut $30 million dollars out of a human capital enterprise and not have it affect personnel,” Dunn said, in an interview. “There’s no way to do it otherwise.”

Colwell echoed that sentiment in his letter. The “challenging and painful” reductions “will almost certainly include layoffs,” according to Colwell.

“I cannot yet provide an estimate on the number of potential layoffs, as this will depend on how units address their reductions,” Colwell said. “Overall, this will require us to rethink how we structure our work and our organization.”

“However, we will continue to fulfill our mission on behalf of students, offering a range of academic programs and other opportunities within and outside of the classroom. Every incoming student will be able to continue to complete his or her academic program.”

There are several committees on the Carbondale campus that have been studying, over the course of months, possible areas where savings can be achieved. A committee assigned to review non-instructional and support functions of the campus released its final report earlier this year.

Another committee reviewing core academics is expected to release its final report and recommendations in May. Then, the standing Chancellor’s Executive Planning & Budget Committee will review the two reports and deliver final recommendations to the chancellor, Dunn said, explaining where the process stands in identifying cuts.

The budget impasse playing out in Springfield has exacerbated the financial situation facing the Carbondale campus, as it has all public universities in the state, including the Edwardsville campus and SIU School of Medicine that, with Carbondale, make up the three legs of the SIU System.

Public universities in Illinois have operated without full fiscal year budgets for the past two years, and a third year is approaching without any signs of an agreement on a fiscal year 2018 budget. In the meantime, higher education has received funding through two stopgap partial year funding measures. In April, the SIU System received an allocation of $56 million, of which about $29 million went to the Carbondale campus. And on June 30, about $104 million was approved for the SIU System, of which about $54 million went to Carbondale.

The two stopgap appropriations together amounted to only about 41 percent — give or take — of what SIU Carbondale would have received in a typical two-year period.

But as Dunn noted Wednesday, SIU’s financial predicament is more extreme than that of the other campuses because Carbondale has managed a structural deficit for some time largely because of enrollment declines and a campus infrastructure that hasn’t been adjusted to account for fewer students showing up each fall. That means the Carbondale campus is going to have to cut spending regardless of whether another stopgap or full-year budget deal is approved by the General Assembly. Though, the cuts may not be as extreme if additional state funds are appropriated.

Dunn said it’s because of declining enrollment that the Carbondale campus must consider a serious review of departments and/or programs, and consider the elimination of some that are experiencing low enrollment and graduation rates.

According to Colwell, a cut of $30 million equates to 15.9 percent of the state budget for the campus. The reduction will be approached in two ways, he said. For one, permanent cuts totaling $19 million will be made to state-funded accounts, those supported by state appropriations and tuition, to be implemented beginning July 1, the start of the next fiscal year. Secondly, a plan must be implemented to pay back the roughly $83.3 million in borrowed reserve funds the university anticipates burning through in the final three months of the current fiscal year in the absence of additional state funding.

Colwell outlined the following plan to make $19 million in permanent cuts. The first set of outlined cuts are campus wide.

• Vacant positions, $10 million: Any vacant positions funded by state resources will be swept permanently into a central account as of July 1 and going forward, and all future approved positions will be funded out of this account. This approach will give the campus more flexibility to fill positions where needs are greatest, regardless of a particular department’s ability to fund them, Colwell stated. It is anticipated many positions will go unfilled, resulting in the $10 million savings. It is estimated that 158 vacant positions may go unfilled, in addition to the 293 already reduced during the budget impasse.

• Campus work opportunities for students, $1 million: Vice chancellors and the chancellor’s office will be provided a financial target to be reached either through reduction in student hours or positions. It is anticipated that this will affect about 200 of our more than 3,700 student positions, Cowell said. The chancellor said it is unfortunate to have to cut student work hours, but said the savings cannot be achieved without doing so.

Additional cuts will be made to specific units of the campus. Colwell’s plan calls for a $1.5 million cut to plant and service operations; a $1.2 million cut to partially self-supporting units that include athletics and some research and service centers; a $1 million reduction in academic administrative costs and a $750,000 cut to non-academic administrative functions; a $500,000 cut to information technology services; a $465,000 cut to the School of Law; a $400,000 cut to the Library; and a $166,000 cut to development and alumni relations units.

As for how borrowed funds will be repaid — amounting to roughly $8.3 million to $11 million owed annually over 10 years — Colwell said that how this is done will vary from year to year. He said it is anticipated the amount that will be due annually is on the lower end of the scale, but that planning must be done for a worst-case scenario.

In his letter, Dunn addressed Carbondale’s potential need to borrow from the Edwardsville campus’ unrestricted funds. “The SIU budget is, and always has been, one budget comprised of three sub-budgets,” Dunn wrote. “Still, I fully understand there may be keen frustration — if not anger — at the fact that earlier cost-cutting efforts and strong enrollments at Edwardsville are being rewarded with that financial strength achieved now benefiting another campus.” But Dunn said this is not being done to help Carbondale avoid painful cuts.

It is necessary to show Carbondale operations “in the black” on paper, he said, and there will be no physical transfer of funds. “This is not a case where we are in danger of having all SIU campuses now becoming swamped … pulled down to the verge of fiscal insolubility or financial collapse in an attempt to rescue one,” Dunn wrote.

Both Dunn and Colwell noted that SIU Carbondale, Edwardsville and the School of Medicine have a solid future, despite the difficulties currently facing the Carbondale campus. These tough decisions will ensure we “all are here to stay,” Dunn wrote, “with the doors for each of our locations open wide and serving future generations …”

Wrote Colwell, specifically about the Carbondale campus: “We will look different, and we will be lean. And we will be here for years to come.”

Appointment of a new chancellor, borrowing proposal on agenda for special meeting called by SIU board

This is a springtime view of Pulliam Hall at SIU taken March 11, 2017.