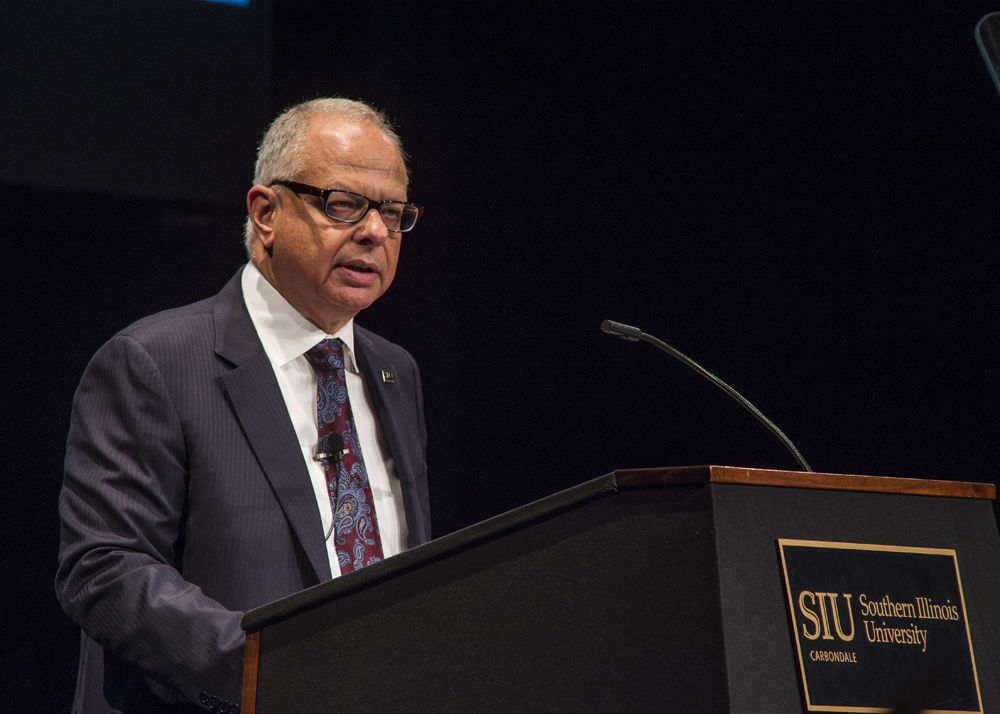 SIU chancellor Carlo Montemagno speaks in September during the State of the University address. 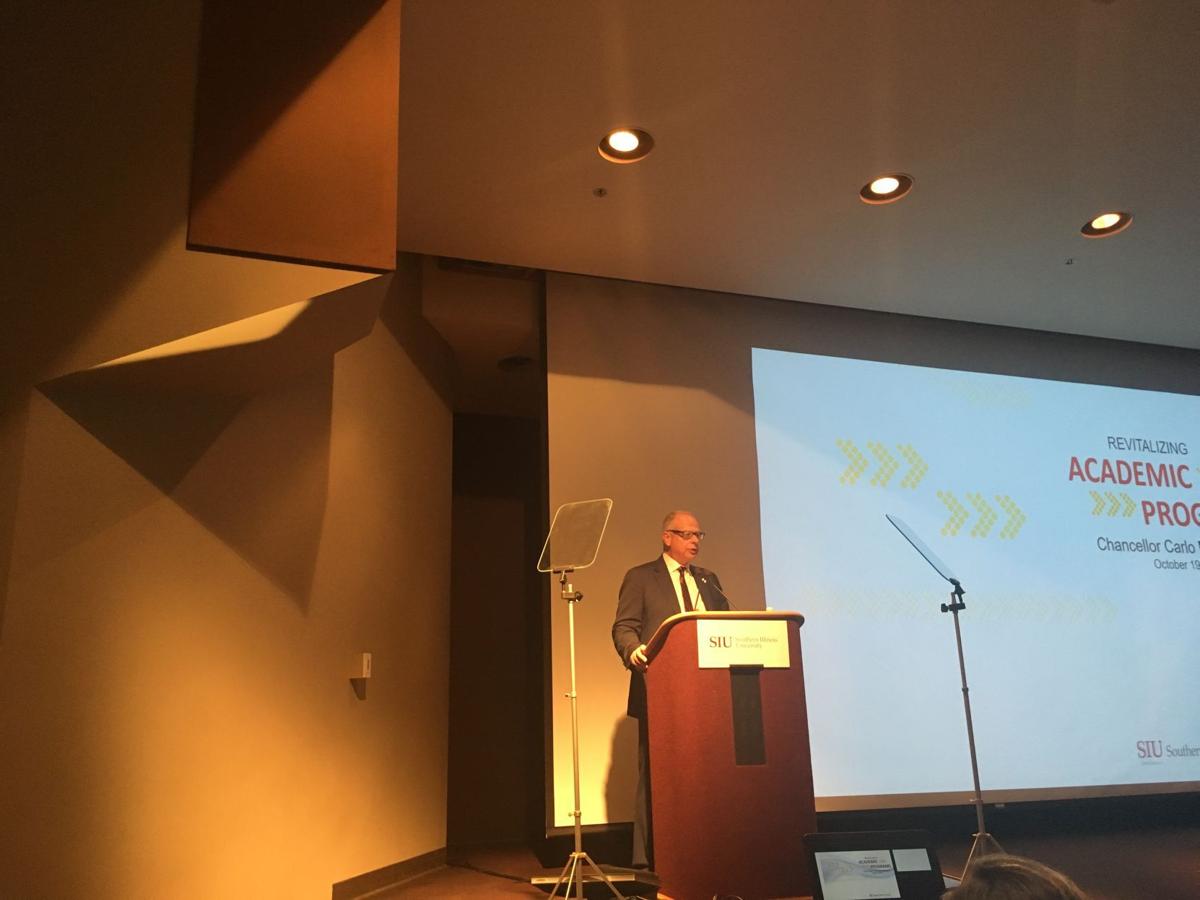 CARBONDALE — At an open forum Thursday, Southern Illinois University Carbondale Chancellor Carlo Montemagno offered a more detailed look at the restructuring plan intended to save the university from its “free fall.”

The chancellor’s presentation of what he refers to as a “straw man proposal,” delivered to a standing-room-only Student Center Auditorium, was followed by a Q & A segment that grew tense at times as faculty and students loudly questioned the proposed elimination of departments and the planned cutting of the Africana Studies major.

SIUC has lost 50 percent of its freshman class in the last three years alone, the chancellor said in his introductory remarks.

“The biggest limitation in our ability to change has been bureaucratic, artificial boundaries created by the way we count effort and resources. In numerous conversations with faculty, I have heard about great ideas to deliver new programs that were stymied because of bureaucratic obstructions,” Montemagno said.

The solution, he argued, is for the university to restructure its offerings to allow for greater “synergy.”

The proposed shake-up would eliminate all 42 departments across campus and pare the university’s eight academic colleges down to five: College of Agricultural and Life Sciences; College of Business and Analytics; College of Engineering, Physical Science and Applied Technology; College of Health and Human Services; and College of Liberal and Performing Arts.

The five colleges would contain a total of 15 schools; those schools, in turn, would house programs. The School of Law, School of Medicine and a newly established School of Education would be freestanding.

According to Montemagno’s State of the University address, delivered Sept. 26, the reorganization would cut $2.3 million in administrative costs — primarily by eliminating department chairs.

SIUC's chancellor sketched out a broad academic reorganizational intended to get the university back on track. He also announced that University Museum, which shuttered in July because of the state budget impasse, will reopen in January 2018.

While the overarching structure is firm, placement of individual units and the names of colleges are still up for discussion, he said Thursday.

“I know that the final structure will look different at the end of the process. Faculty, especially, will have insights that may lead to changes, since they are the experts on the programs,” Montemagno said.

Faculty within schools will make decisions about whether programs stay the same or are changed.

“This is shared governance in its most basic form. The faculty have the opportunity to define their educational programs,” he said.

The chancellor also addressed the university’s ideal size. He placed SIUC’s target enrollment at 18,300 by 2025.

“A lower target will affect our capacity to be a comprehensive institution. A higher target risks our ability to provide a personalized educational experience. I believe that 18,300 is realistic and achievable,” Montemagno said.

“I propose all of our graduates must have strong written and oral communication skills, an appreciation for living and working in a multicultural and global society, emotional intelligence and leadership skills. We also want our students to have a multidisciplinary foundation that allows them to be able to assimilate knowledge that comes from multiple sources. This is one of the primary benefits of attending a comprehensive research institution,” he said.

Montemagno said he had tasked the Diversity Council with finding ways to integrate diversity into the core curriculum.

During the subsequent comment period, Montemagno faced a tough crowd; almost all the students and faculty members who asked questions were critical of the proposed changes, and the mood was sometimes hostile.

Anne Fletcher, a theater professor, asked whether faculty will retain tenure despite the elimination of departments.

Montemagno answered that faculty members’ tenure will be transferred to the new schools.

Sara Beardsworth, a professor in the philosophy department, said she’d had experience with a similar restructuring plan at another university, which eventually did away with the humanities and became a technical school, and that she was “concerned” and “not very hopeful” about the model.

“Well, I’m sorry you’re not very hopeful about it,” Montemagno said. “… I can tell you unequivocally that I did not come here to create a polytechnic university. As you heard me say, I talk about us being a comprehensive, four-year research university.”

When Beardsworth said she believes there is a need for department chairs, Montemagno said, “I think the chairs have provided an opportunity for you people, for the faculty not to be able to realize what they want” because it is harder to transfer resources across departments.

“You’re still going to have program directors to take care of the managing and shepherding of the program within the schools,” he said.

One woman questioned the idea that eliminating chairs and changing the structure would increase SIU’s ability to recruit and retain students.

Montemagno said the bureaucratic structure “prevents the faculty from engaging in innovation and entrepreneurship.”

“If we had the proper academic programs for (students) to come, they would be here. Otherwise, why are they not here?” he said.

“They’re not here because we’re not treated as we should, because me being a minority on campus, I don’t feel like I’m accepted. I feel like I have to walk on eggshells,” one woman called out.

Montemagno countered that he plans to incorporate multicultural competency as part of the core curriculum.

Undergraduate Student Government President Joshua Bowens asked for more information about the possible elimination of the Africana Studies major, proposed in the Financial Sustainability Plan presented to the SIU Board of Trustees in July; several other members of the audience also voiced concerns about that reduction.

“But right now, given the climate you talk about, it’s not working. And my job here is to figure out how I make it work. And so I’m relying on the talent and the people we have in our Diversity Council of how I make it work, and how do I touch every single student who goes through here in a meaningful way so that they understand the differences between peoples, and that they are competent to be able to work with people of different types,” he said.

Faculty can offer feedback on the restructuring proposal by going to chancellor.siu.edu/Vision2025/feedback.

The chancellor plans to finalize the restructuring plan in February, bring a budget based on the final plan before the Board of Trustees in April, and implement the changes by July 1.

SIUC chancellor says decision on Africana Studies will be deferred

I have received a lot of feedback since my State of the University address and the following open forum on revitalizing academic programs. It …

SIU chancellor Carlo Montemagno speaks in September during the State of the University address.