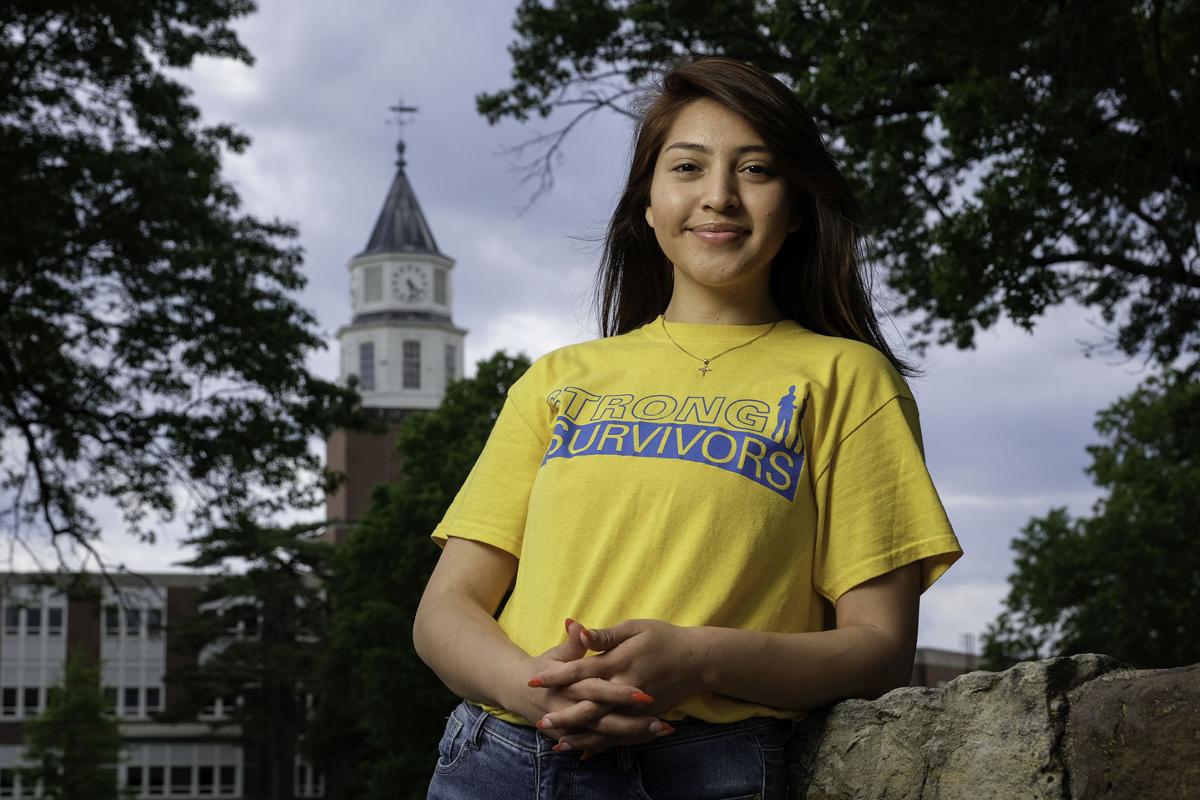 Isabel Neira will be the first in her family to graduate from college when she receives her degree in exercise science during commencement at SIU today. 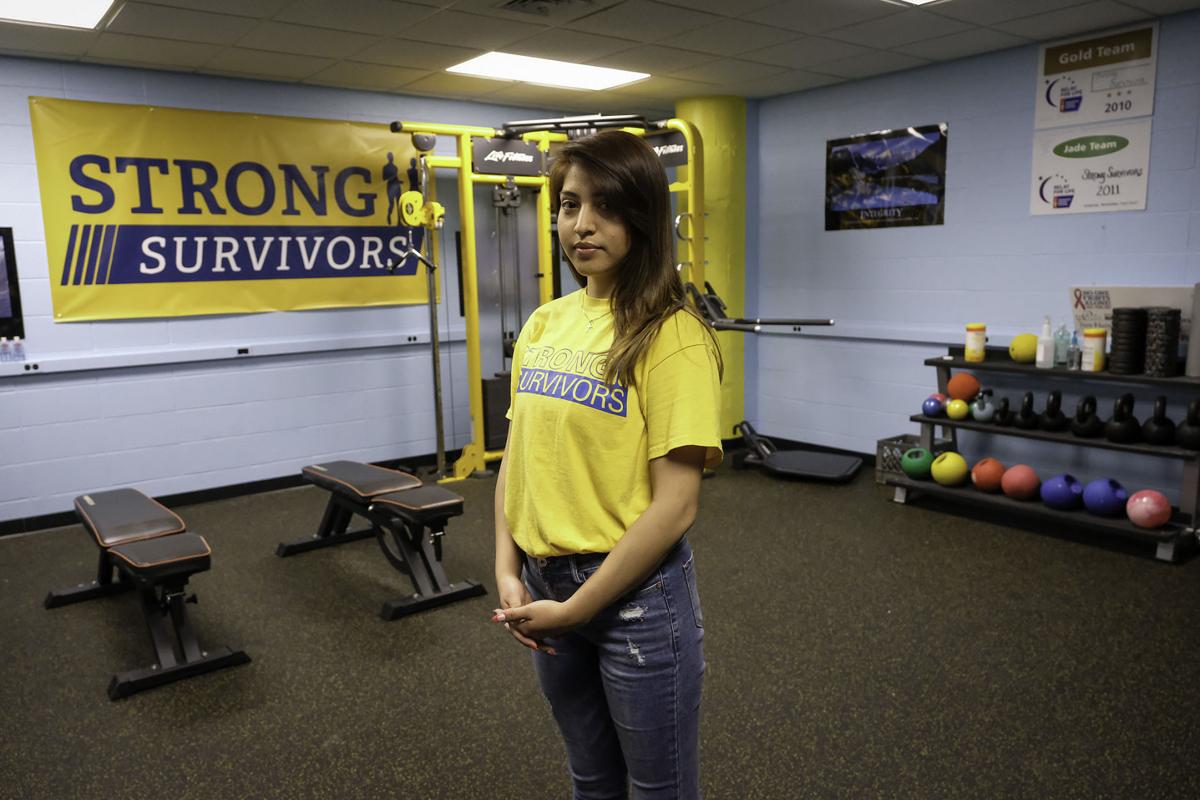 Isabel Neira’s involvement in working with cancer survivors in the Strong Survivors program at SIU played a large role in helping her persevere through her own struggles to complete her degree in exercise science.

She was the first in her family to attend college and now she's set to graduate Saturday from Southern Illinois University Carbondale and ready to start her career with a new employer next week.

While she ends up a success story, her path to graduation was not a smooth one. In fact, there were times Neira, 22, didn’t think she would make it through the day, let alone to commencement.

First arriving in Carbondale with an undeclared major, the Chicago native struggled with relationships and with school itself.

“After my first semester I went on academic probation,” Neira recalled. “It was bad and I remember thinking, ‘This can’t be happening; I cannot let it go down this way.’ I was not going to throw away my college experience. I never wanted to be on probation again.”

Neira said she decided to turn things around. She worked hard in the classroom, choosing to purse a major in exercise science, but it was outside of academics where she really found herself.

A former high school soccer player, she played intramural sports and, as she advanced in her studies, began working with participants of Strong Survivors, SIUC’s therapeutic exercise and nutrition program for cancer survivors from throughout the region. She also worked for a Carbondale physical therapy provider.

Neira had come a long way from her struggles as a college freshman. Then the COVID-19 pandemic hit. Suddenly, in-person activities including classes, work with Strong Survivors and her recreational sports all came to a halt. A very social person, she, like all college students, was forced to learn remotely. She was devastated.

“My sanity always came from being physically active. Suddenly, that was all taken away,” she said.

Then came another blow. Years of running up and down soccer fields and a single misstep in early 2020 led to total ACL reconstruction surgery.

“This was in the middle of the winter in Chicago, where we had negative degrees and snow piled up,” she said. “I was constrained to be inside for longer than I’ve ever sat around in my life. I’ve always been active and my ‘happy place’ was through sports and work with school. This began to take my sanity because all I could do was recover slowly and that was a big hit on who I am.”

Neira said she could feel depression setting in. After all, usually training to be the therapist, she was now the patient. She said she felt like the world was against her. She didn’t realize it was just the beginning.

One month into her recovery, her mother suffered a stroke.

“I couldn’t let my depression take over. I had to continue to be a student and now I also had to step up and be the one to hold the house together, helping my mom with rehabilitation. I have two little sisters so I had to step up since my mom was going through rehab of her own — even learning how to remember things and do things like hold a pencil,” she said.

Not wanting to dive into the depths of depression, Neira reached out to Phil Anton, associate professor of human sciences — not to ask special consideration with her school work, but rather just to let him know what was happening.

She also drew on her experiences working with clients of Strong Survivors, a program under Anton’s direction.

“One of my patients was named Paula and she was an absolute fighter. I always wanted to go slow with her, but she was always giving me more than I asked for,” Neira explained. “She was really in the back of my head while I was going through everything. What I dealt with was not the same as cancer, but her to mentality and strength showed me that I could never give up.”

Neira says her recovery, her mom’s stroke, the pandemic and the resulting depression, led her to discover more about her family, herself and her Catholic faith.

“This all has pushed me to grow and pushed me to learn. I didn’t give up and I didn’t take the easy way out and so far, it’s turning out well, so I can’t complain. I can only be thankful and feel beyond blessed that my life has really switched around,” she said.

Anton described Neira as "a fighter."

“I am truly amazed by the fact that Isabel was able to continue to do superlative work while she was going through all of this really speaks to her character and that fact that she is a fighter,” Anton said. “She has overcome a lot to get where she is now. I can’t say enough about how she has handled herself through what might be called multiple crises.”

As Neira and her family — including her mother who she said is doing quite well — drove from Chicago to Carbondale for Saturday’s commencement, she was able to reflect on her personal trials.

“I feel like I was very immature when I started (at SIUC), but now I’m coming out as a professional,” she said. “My time here and the people have helped me transform it to a well-grounded and better person.”

Students from Anna Davis’ private art classes floated nine “lily pads” in a nook of Southern Illinois University’s campus lake. The project is designed to be both artistic and to help reduce the growth of algae in the lake.

Luci Vick does not own a horse — yet.

Robert D. Morgan, a professor of psychological sciences at Texas Tech University, will be the dean of the College of Health and Human Sciences…

A professor of geology and soil science from a North Dakota university will be the next dean of the College of Agricultural, Life and Physical…

CARBONDALE – A virtual conference next week will examine medical, legal and policy efforts during the COVID-19 pandemic and their impact on he…

Isabel Neira will be the first in her family to graduate from college when she receives her degree in exercise science during commencement at SIU today.

Isabel Neira’s involvement in working with cancer survivors in the Strong Survivors program at SIU played a large role in helping her persevere through her own struggles to complete her degree in exercise science.