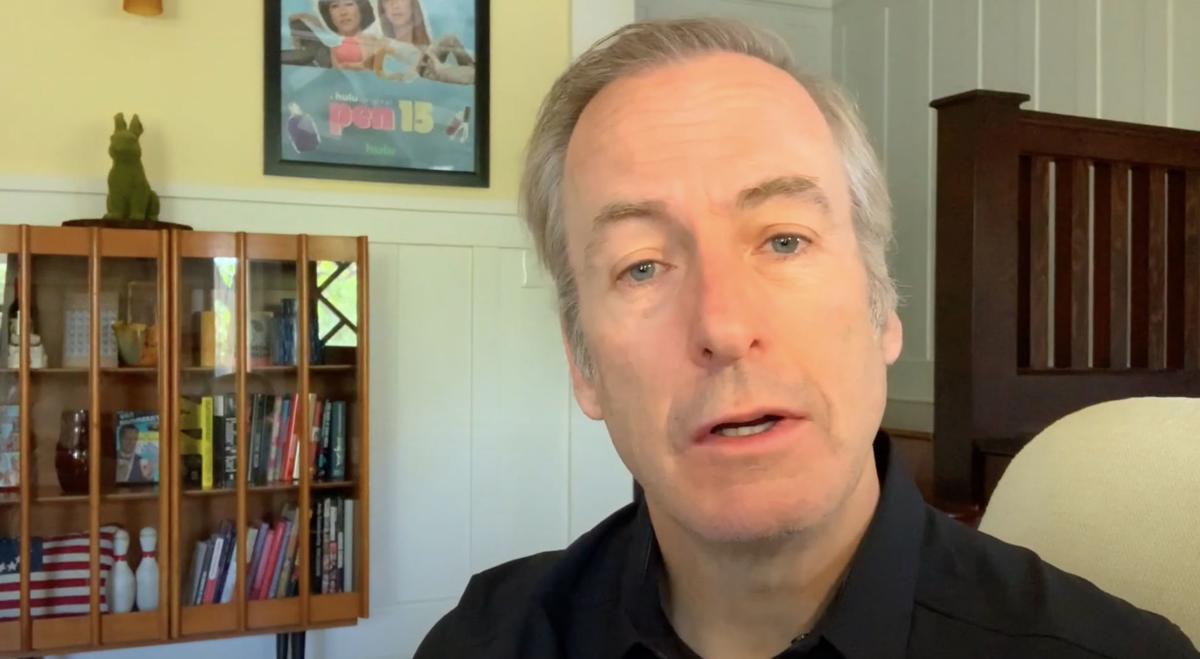 Bob Odenkirk, actor and SIU class of 1984 graduate, gives remarks to graduating students in a prerecorded video for a virtual celebration hosted Saturday by the university. SIU created a virtual celebration and rescheduled traditional in-person graduation ceremonies amid the COVID-19 pandemic. Odenkirk was scheduled to receive an honorary degree during the May 2020 commencement ceremonies. 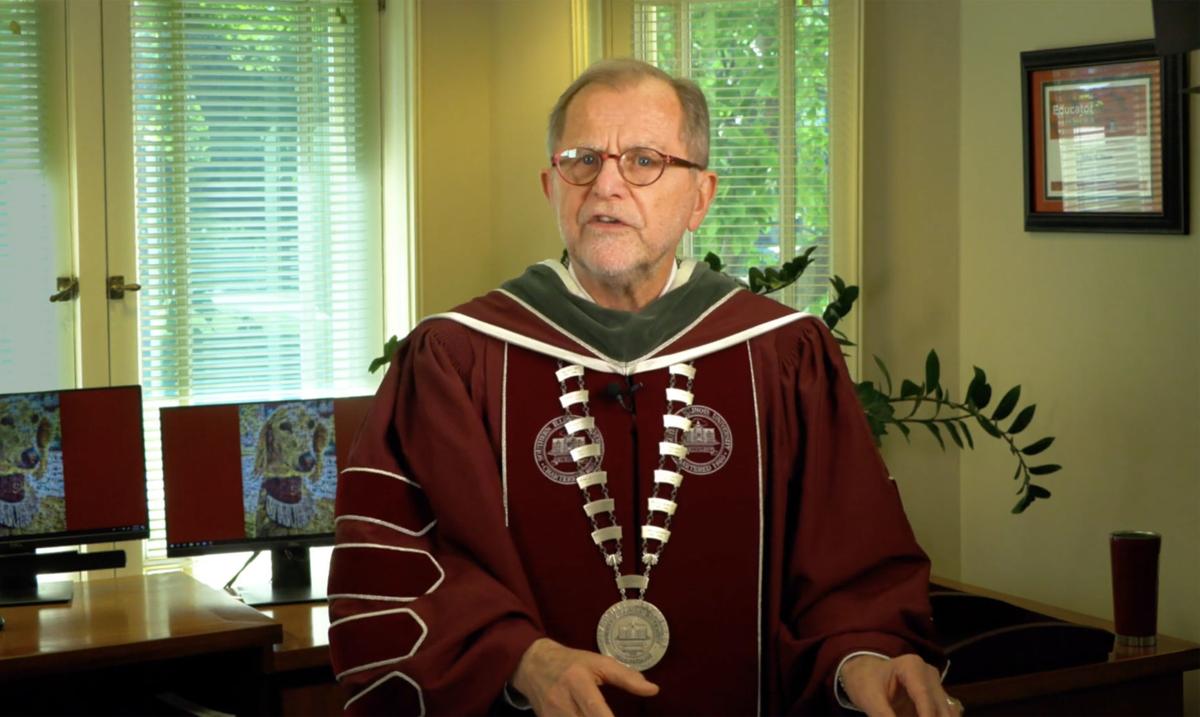 CARBONDALE — While the COVID-19 pandemic prevented graduating Southern Illinois University students from taking their places in the Banterra Center for 2020's spring commencement ceremonies, university officials brought the pomp and circumstance to the students' homes.

“We know, we know very well that you want to celebrate your accomplishments in person with your faculty, family and friends ... but that is something that is not possible during these unusual times,” Dunn said in the video message. He said the university has not “given up on the idea” of acknowledging the graduating class with an in-person commencement as early as August, or later if need be.

Odenkirk imparted wisdom to the graduating class in the video message and detailed his time at SIU after attending four universities.

“If you opened up a college back then, I was the first in line,” Odenkirk said. “I spent the most time at SIU and that is where my degree is from.” He said he liked sketch comedy when he went to SIU and “never imagined” he could do it for a living.

“However at SIU, I had the opportunity to do comedy. I had a radio show on WIDB — 'We’re In Da Basement' — with my friend Tim Thomas,” Odenkirk said. “It was called 'The Primetime Special' and we reliably churned out comedy.”

Odenkirk recalled how he would finish his classwork, go into an empty classroom and write out the sketches. One day he said he looked down at his notes and asked himself if this was what being a professional writer was like — he said he wasn’t far off.

Despite the crisis graduates are currently facing, Odenkirk encouraged them to be introspective and find what they love during this uncertain time.

“This is an excellent time to look harder because we’re in a crisis time and if you’re looking for a silver lining ... let’s agree that maybe this is a golden moment of opportunity. Things are going to get going again,” Odenkirk said. “When this dumb jerk virus is scienced into submission, there will be lots of everything we want and need to do happening again.”

He said this is a good time for “considering a distant dream” and “doing the things that don’t cost anything but time.”

“I hope you'll take this moment and discover what you love and you can carry on doing that when we get back to work,” Odenkirk said. He added encouragement to “focus on yourself, focus on what makes you tick, finding what you love and spending time with your loved ones.”

The video continues with vignettes of events that have happened over the past four years, such as the 2017 Solar Eclipse and various campus events. It also opens with a chamber choir singing the “Alma Mater” and closes with the Marching Salukis performing “Go Southern Go!”

Dunn, along with Komarraju, then confer the 2,142 degrees to the graduating students. The breakdown of the degrees conferred includes 43 associate degrees, 1,566 bachelor's degrees, 438 master's degrees and 94 doctoral degrees.

The three honorary degrees that were slated to be given during the May 2020 graduation ceremonies will be held until they can be awarded in person, according to Goldsmith. Honorary degree recipients include actor Odenkirk, journalist Jackie Spinner and veterinary technician Pamela Wilson.

Odenkirk is a “leading comedian, actor, writer, director and producer in Hollywood,” according to his nomination to the SIU Board of Trustees. He has earned dozens of nominations and awards, including winning two Primetime Emmy Awards and a Screen Actors Guild Award.

He is known for his roles in Better Call Saul and Breaking Bad while also winning a Primetime Emmy Award for his work as a writer on Saturday Night Live and The Ben Stiller Show. While at SIU, Odenkirk worked at WIDB — SIU’s student radio station — creating “The Prime Time Special,” a late-night comedy show.

Spinner is an SIU alumna and award-winning journalist for the Washington Post from 1995-2009, who later became the Post’s Baghdad Bureau Chief. While at the publication, she has reported from across the middle east including Baghdad, Fallujah, Kurdistan and Abu Ghraib. After leaving the Washington Post in 2009, Spinner continued to play major roles in international journalism.

As a U.S. Fulbright Scholar in Muscat, Oman in 2010, she started the first student newspaper at Sultan Qaboos University. She also served as director of media relations and faculty adviser at the American University of Iraq–Sulaimani, where she developed the AUI-S Voice, Iraq’s first independent university newspaper. She co-directed, “Conflict Zone,” a national exhibit featuring photos and videos shot in Iraq and Afghanistan by war photographers and her documentary, “Don’t Forget Me,” about three Moroccan families with children on the autism spectrum, won the coveted Mike Covell Award for work by an SIU alumnus.

Spinner is currently a professor of journalism at Columbia College Chicago and editor of the Gateway Journalism Review, housed in SIU’s School of Journalism.

Wilson is a 1979 graduate from SIU and has devoted her career to protecting public health through her work with the Texas Department of State Health Services, where she served as a member of a four-person core team that developed and implemented the state’s innovative Oral Rabies Vaccination Program, according to her nomination. Wilson’s contributions to the public health field have been noticed at the state, national and international levels and her scholarly works have been widely cited.

This isn’t the first time the university has not been able to hold a traditional graduation ceremony — 2020 marks the 50th anniversary of the Vietnam War protests that led to the shut down of the campus. University spokeswoman Rae Goldsmith said the university is also looking at honoring the class of 1970 decades after its canceled graduation.

50 years ago, SIU Carbondale campus shut down during Vietnam

“No matter how you choose to celebrate this important step in your life, please know that we are proud of you and look forward to your future success,” Dunn said in an emailed message to students Saturday morning. “On behalf of the faculty and staff of SIU, and with the support of alumni who came before you, congratulations and remember: Once a Saluki, always a Saluki!”

Did you know? These 26 celebrities went to SIU Carbondale.

Bob Odenkirk was featured in SIU Carbondale's virtual spring 2020 commencement. Did you know these other famous people went to SIUC?

CARBONDALE — Having fulfilled its initial contract with the state, Southern Illinois University Carbondale has signed on to provide another la…

Bob Odenkirk, actor and SIU class of 1984 graduate, gives remarks to graduating students in a prerecorded video for a virtual celebration hosted Saturday by the university. SIU created a virtual celebration and rescheduled traditional in-person graduation ceremonies amid the COVID-19 pandemic. Odenkirk was scheduled to receive an honorary degree during the May 2020 commencement ceremonies.