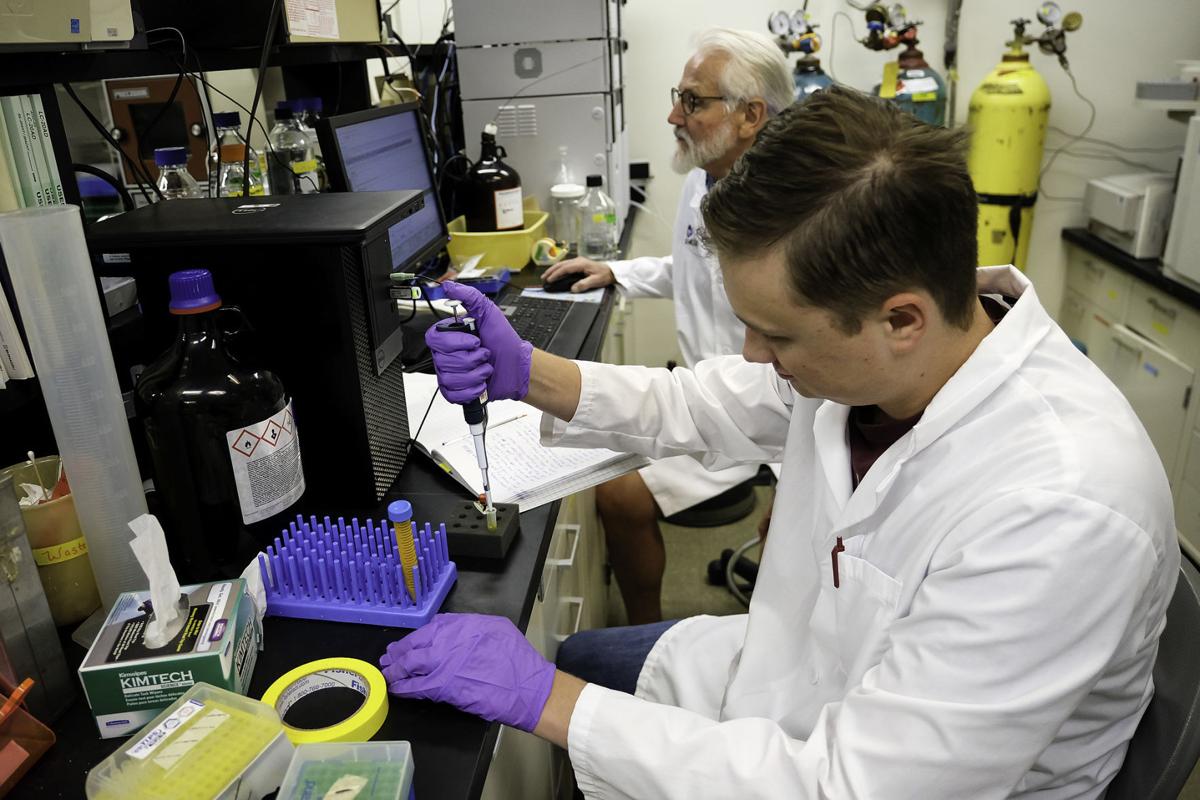 Wyatt Smith, a junior physiology major at SIU, extracts a sample of chicken egg yolk for analysis to determine if any CBD is present in the yolk from a chicken that has been fed CBD as Dale “Buck” Hales, professor of physiology at SIU, reviews results. Hales is studying the potential effectiveness of flaxseed and CBD in the prevention of ovarian cancer. 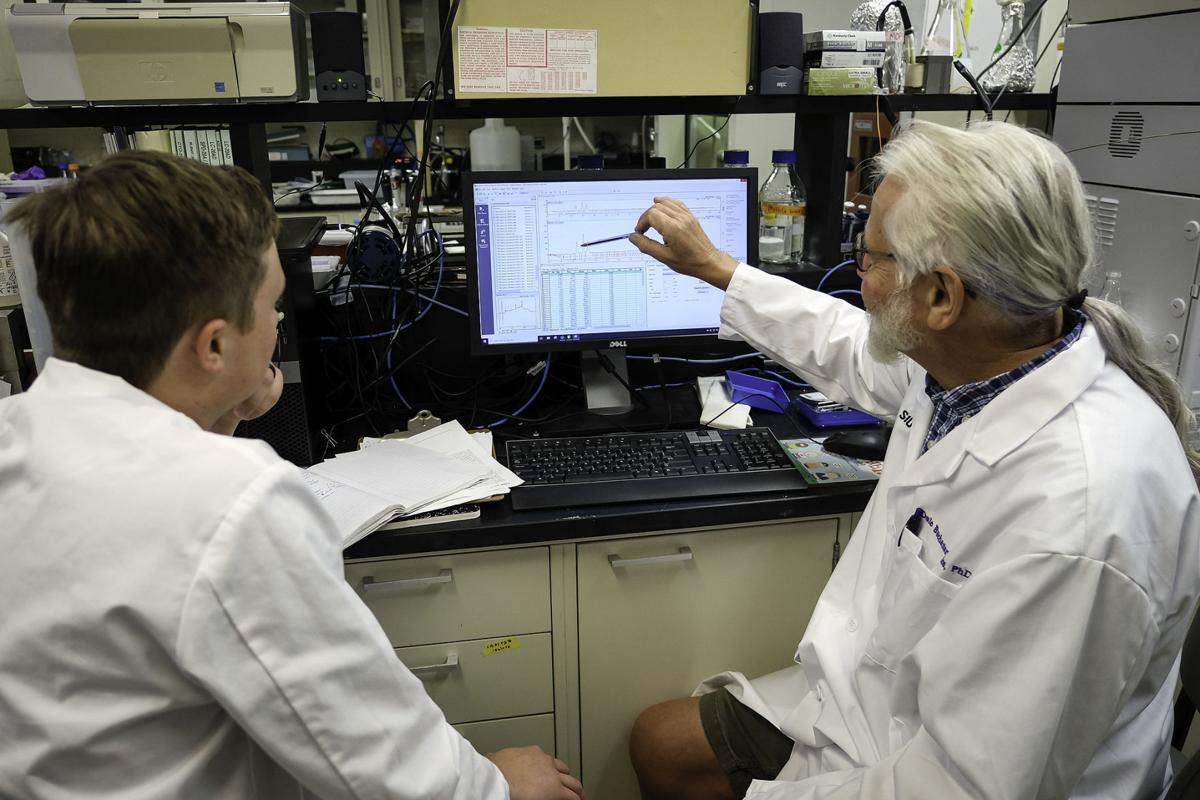 Dale “Buck” Hales (right), professor of physiology at SIU, examines test results with Wyatt Smith, a junior physiology major, as they test for the presence of CBD in chicken egg yolks from chickens that have been fed CBD. Hales is studying the potential effectiveness of flaxseed and CBD in the prevention of ovarian cancer.

A Southern Illinois University School of Medicine researcher believes flaxseed oil may reduce the reemergence of ovarian cancer and even be able to prevent the onset of disease.

“Ovarian cancer is a really bad disease because it’s usually not discovered until it’s at a very late state, the treatment options are limited and the prognosis is very poor,” Dale "Buck" Hales, professor of physiology, explained.

Hales said cases of ovarian cancer often go undiagnosed because symptoms mimic those of other illnesses. Even with advancements in treatment, the outlook for women who are eventually diagnosed with ovarian cancer is not good. What is especially concerning is how frequently the cancer comes back.

“The average time of recurrence is 16 months for aggressive instances of the disease and maybe up to two years for less aggressive disease. The sooner it occurs, the worse the outcome. I would say 75% of women who get recurrent disease succumb to it. The overall survival rate of women with ovarian cancer really hasn’t improved over the last 60 years,” he said.

Equally disturbing is the challenges facing patients from chemotherapy and other treatment options to quality of life issues, but, as Hales explained, reducing the odds of reoccurring cancer changes everything—and that’s something to crow about.

Hale said hens who have consistently been laying eggs for years develop their own type of ovarian cancer—one that is remarkably similar to the disease in women.

“We started to look at the chicken as a model for ovarian cancer and it was remarkable how the accumulation of fluid and the pattern of the dissemination of the metastasis was exactly like what you see in the clinic,” Hales explained, adding that microscopically, the tumors were almost identical to those in women.

After ovulation in both hens and humans, he explained, ovaries are wounded in a way and show inflammation. Hales said cancer does the same thing.

“Cancer is a wound that will not heal,” he added.

Noting that reducing the inflammation would be key, Hales wondered how best to deliver anti-inflammatories.

Then, in the dairy case of a health food store, he had an “A-Ha” moment. Not far from the milk and the cheese, he saw a container of eggs boasting that they were rich in Omega-3, a polyunsaturated fat ripe with antioxidants and anti-inflammatories.

He wondered how the eggs — or more importantly, the hens that laid them — are infused with Omega-3. He discovered a simple answer: They were fed flaxseed.

Hales began years of research, analyzing hens with the ovarian cancer-like condition, studying those who had been fed flaxseed and those which had not ingested the supplement.

“Remarkably, we found that the ones that got ovarian cancer that were fed flax had significantly improved conditions,” he reported. “They had the disease, but the cancer had not progressed. It really seemed to hinder the progression of the disease.”

A subsequent study involved supplementing young hens’ diets with flax as soon as they started to ovulate. At the end of the study, a significant number of those on flaxseed had longer lives, better overall health and more importantly, a reduction in cancer.

Hales and his research partners have analyzed tissue samples from more than 4,000 hens with similar results. Given the similarities of the cancer in hens and humans, he said he is confident in the results and has a recommendation.

“I would recommend that women today include flaxseed in their daily regimen,” he said, explaining that a couple of tablespoons added to a daily smoothie for example would be sufficient. "I would say a woman in her late 30’s should start using it.”

Hales says a very small clinic trial with women who have survived ovarian cancer was encouraging.

“We put them on flax to see if it would prevent the disease from recurring and we have one women whose five years out now,” he said, adding that he hopes to do a much larger trial.

As for testing whether flaxseed can prevent ovarian cancer, Hales said that would be a much more complicated study. He said that projects applying for funding from the National Institutes of Health require multi-site tests and the use of a placebo.

“I am ethically challenged by that idea,” he said. “Plus, how do you prevent women from eating flaxseed?”

His work has garnered him attention worldwide including citations in others’ research reports and a stack of testimonials from women, both who have had ovarian cancer and those looking to prevent it.

“There’s no early detection for ovarian cancer, but I think we could probably see a 60% reduction in it if women lead a healthy lifestyle, a healthy diet and include flaxseed as part of it,” he said.

Hales and his team of researchers isn’t stopping their efforts. They continue to test hens, looking for correlations and they’ve expanded their work as part of the university’s cannabis science center. Hales said they have expanded natural products research and are seeing some of the same results from CBD, a component of cannabis.

“It looks like it also has a beneficial effect suppressing the inflammatory-causing actions, too,” he said.

Shawnee Community College is the first college to sign-on to "Saluki Step Ahead," an SIU program designed to ease transferring to the university.

SIU student entrepreneur Zavi Constant won with his 90-second pitch for “Crowd,” a funding app he is developing.

The backyard game of cornhole is not a NCAA-sanctioned intercollegiate sport, but that didn’t stop teams from SIU and Shawnee College from some competition.

Wyatt Smith, a junior physiology major at SIU, extracts a sample of chicken egg yolk for analysis to determine if any CBD is present in the yolk from a chicken that has been fed CBD as Dale “Buck” Hales, professor of physiology at SIU, reviews results. Hales is studying the potential effectiveness of flaxseed and CBD in the prevention of ovarian cancer.

Dale “Buck” Hales (right), professor of physiology at SIU, examines test results with Wyatt Smith, a junior physiology major, as they test for the presence of CBD in chicken egg yolks from chickens that have been fed CBD. Hales is studying the potential effectiveness of flaxseed and CBD in the prevention of ovarian cancer.