Through a special research and service project, Southern Illinois University Carbondale students are learning first-hand about women serving in the military and preserving those stories for future generations.

Graduate students taught by Bobbi Knapp, an associate professor of kinesiology with a cross-appointment in sociology and women, gender and sexuality studies, recently wrapped up their third set of interviews with current service women and female veterans. Knapp and her students have logged more than 80 interviews since the project began three years ago.

The stories told are as unique as the women themselves.

Tara Carmichael, who earned a bachelor’s degree in kinesiology and exercise science and an associate’s degree in physical therapist assistant at SIU, told of her service that extends back more than 25 years with the Army National Guard. Shortly after completing two nearly back-to-back deployments in Korea, her unit in 2003 received orders to deploy to Iraq. She recalled that at the time she had just 42 days to get her life in order, including making childcare arrangements for her two small children.

From Wisconsin, Carmichael went to Kuwait to receive extra training. Upon her arrival in Iraq, she learned that the previous day’s battalion encountered fatal enemy fire during a truck convoy. Initially assigned to maintenance work, Carmichael agreed to operate a 50-caliber gunner on the gun truck, helping to secure the convoys in an effort to keep the younger soldiers safe. As a senior non-commissioned officer, she was always looking out for her fellow soldiers. Carmichael remains active in the Army Reserves where she is a chief warrant officer 4.

For many of those interviewed, military service is a family tradition. Melissa Uhles revealed that both of her grandfathers, her father and two of her brothers all served. Her youngest brother, a U.S. Marine lance corporal, was killed in action in 2004 in Iraq.

After attending John A. Logan College for a year, Uhles joined the U.S. Navy, hoping to travel and see the world. During her interview, she recalled the numerous changes she saw during her service, including modifications in the Navy dress code — from requiring women to wear dresses to allowing pants. Uhles trained as a signalman but as she prepared for her first deployment, she found no billets open to women because ships had not yet transitioned to allow women on board. She was able to live her dream of traveling though, as she was stationed in locales including Greece and Japan. She is currently an Illinois State Police trooper.

One of the women Knapp interviewed, Ruth Butler, served as an airplane mechanic during World War II. Her granddaughter helped set up the interview and the family was very happy to know that Butler’s story would become part of the Women in Military Service for America archives. The granddaughter has emailed Knapp to let her know Butler passed away since the interview, and she expressed the family’s appreciation for preserving their grandmother’s story.

For students it is not just a class project, but a public service that preserves an important part of American history and at the same time, is life-changing.

Cortney Ales is a graduate student beginning her second year in SIU’s kinesiology sport studies program. Ales said she wasn’t sure what to expect or how she would feel as she began conducting interviews, but knows herself to be naturally empathetic. She found Andrea Green very open and easy to talk to while Green shared her Illinois National Guard experiences.

“I still have a heavy heart for her story that she shared with me,” Ales said. “She was serving when 9/11 hit our country.”

Ales recounted how Green’s unit ended up overseas where Green switched trucks with her best friend before they left on what wasn’t supposed to be a dangerous mission.

“She described hearing shots and explosions in towns nearby,” Ales said. “Her friend’s truck was hit and death occurred within seconds. Not only did she lose her best friend, but she had switched trucks due to not knowing how to work that truck. She struggles with anxiety and PTSD. I couldn’t imagine how she felt or how she still feels. It’s made me appreciate my friends and family more than I usually do. I will never forget her and her stories she shared.”

Knapp has her students write an essay at the end of the semester reflecting on what the interviews have meant to them and what they have learned. Lovisa Hlynsdottir, a native of Iceland who had no previous personal military-related experience, admitted prior to the class most of her perceptions were heavily influenced by media accounts and negative in nature.

“Having the privilege of listening and recording these stories is one of the most valuable experiences I have had in graduate school,” Hlynsdottir wrote.

Another student told of coming to understand the opportunities that the military offers for travel, as a career path, and a sense of camaraderie similar to what people find in sports. Students also learned of the negative aspects of military life as well, including going without showers or other things for extended periods that people typically take for granted.

For Luke James, the project hit home. His mother, Grayce James, served in the U.S. Navy and his father, Robert James, was in the U.S. Marine Corps.

“She exposed me to a reality that I never knew existed because I was so blind and distracted to what only the media depicts,” James said. “After hearing her story, it made me ask myself, ‘Although I’m not in the military, what can I do to help make these women’s lives easier?’ It made me question my privileged role as a man and how I can use my privileges to help benefit others in society.”

The project is a valuable research and learning experience for the students, Knapp said. It also ensures that the stories of women in the military, including their evolving roles and identities, are preserved she said.

The audio recordings, written transcripts and completed paperwork are sent to the Women in Military Service for America Memorial Foundation to be included in the organization’s oral history archives. WIMSA, in turn, shares the interviews with the Library of Congress for its Veterans’ History Project. Any of the women interviewed who resided in Illinois at any time can also complete a registration sheet for the Illinois Women’s Military and Civilian Memorial. Advocacy organizations can also use the information to better serve women veterans, and Knapp utilizes the material in conjunction with several ongoing research projects she is working on.

Knapp and her students make the process as simple as possible. The participants complete a brief biographical data sheet, a letter of consent and registration. Then, Knapp or a student will conduct an oral interview. The average interview takes about an hour and a half, although the time varies depending upon each woman’s length of service, individual experiences, and what she wishes to share. Most of the early interviews were conducted in person while others were by telephone due to location distance. Since the COVID-19 pandemic, all of the interviews switched to telephone or an online format.

Knapp plans to continue the recurring project for students enrolled in her gender and sport course, which she teaches every other spring semester. In between the courses, Knapp will continue doing the interviews herself.

Any woman who is on active duty or a veteran of any of the five branches of the military, the reserves or National Guard, is invited to participate. Women from other military organizations, such as the World War II-era Women Airforce Service Pilots (WASPs), are also welcome to share their stories. For more information, or to participate, contact Knapp at bknapp@siu.edu. 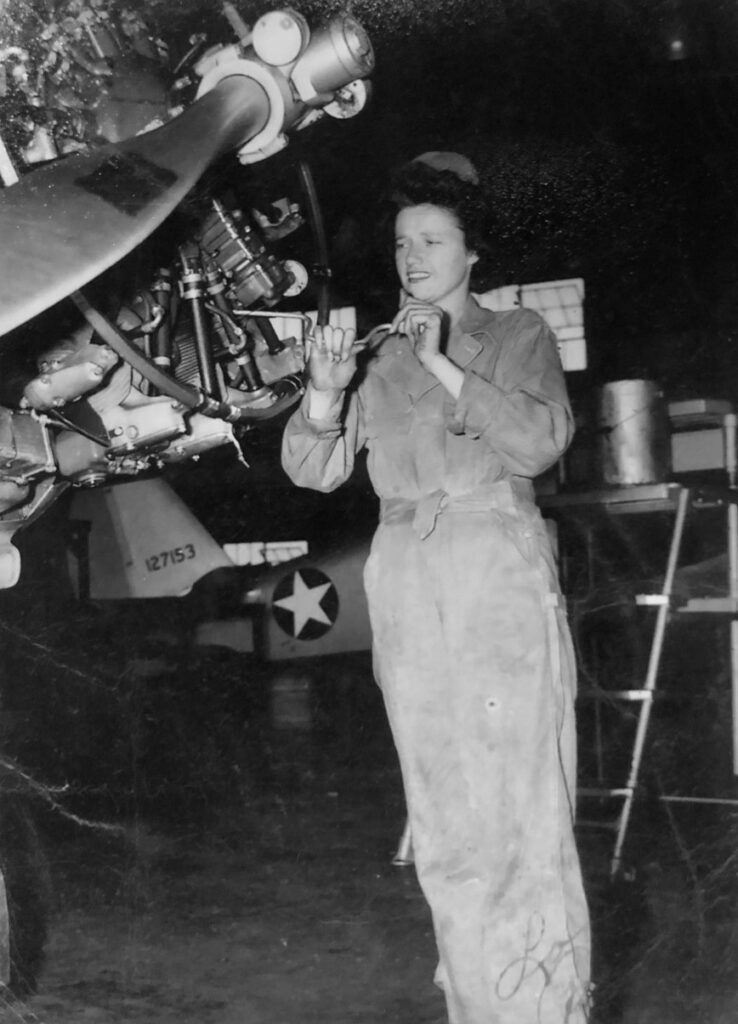 Ruth Butler was an airplane mechanic during World War II. Her story is one of those preserved as part of a community service project by Associate Professor Bobbi Knapp and her students. 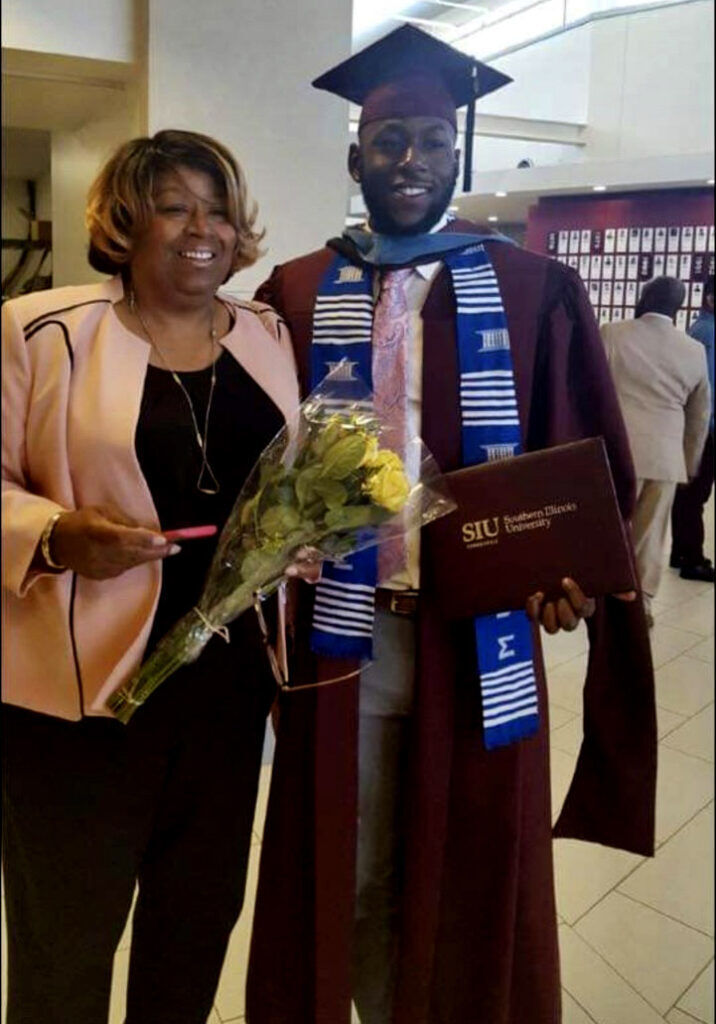 Luke James said interviewing women veterans gave him a greater understanding and appreciation of what his mother and other women contributed in serving their nation.