SIUC faculty, students speak out against restructuring plan at Board of Trustees meeting
14 comments
Share this
{{featured_button_text}}
1 of 4 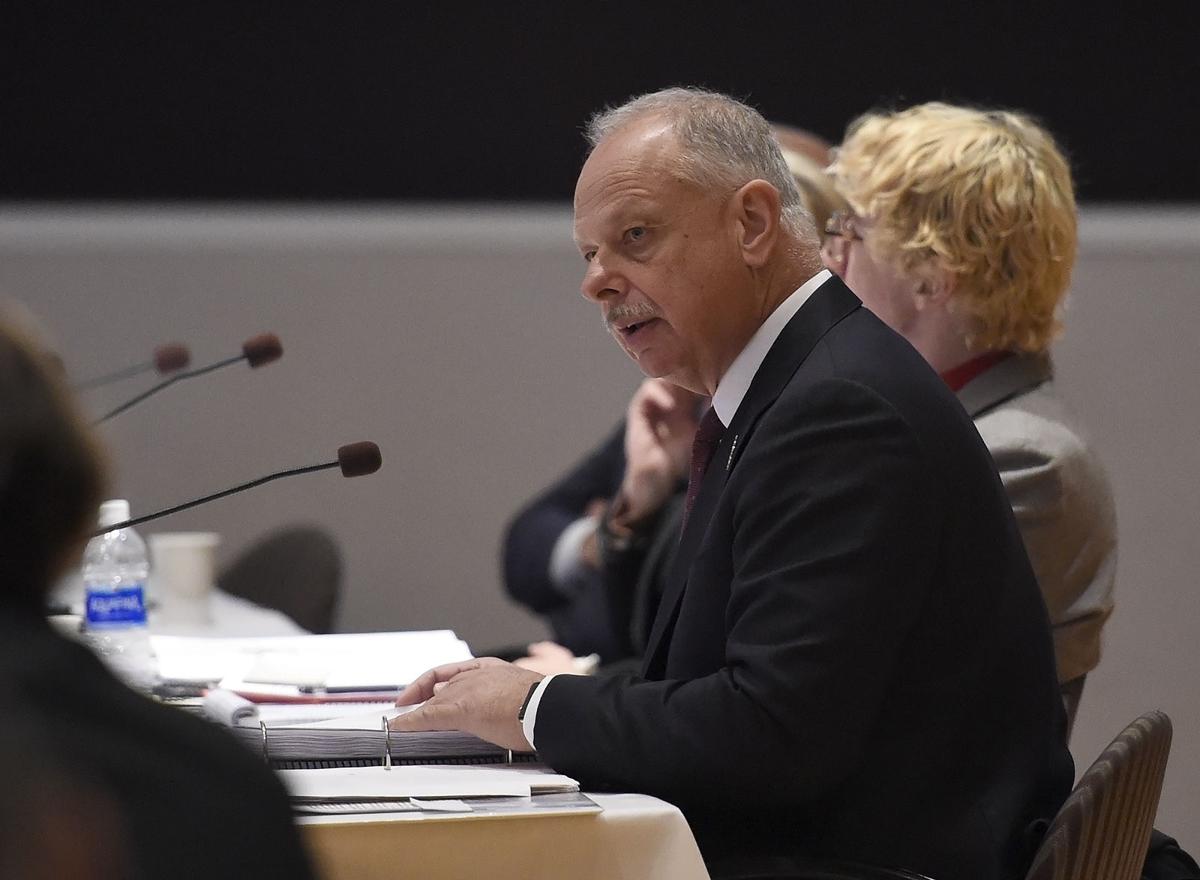 SIU Chancellor Carlo Montemagno speaks during the SIU Board of Trustees meeting on Thursday morning in Carbondale. 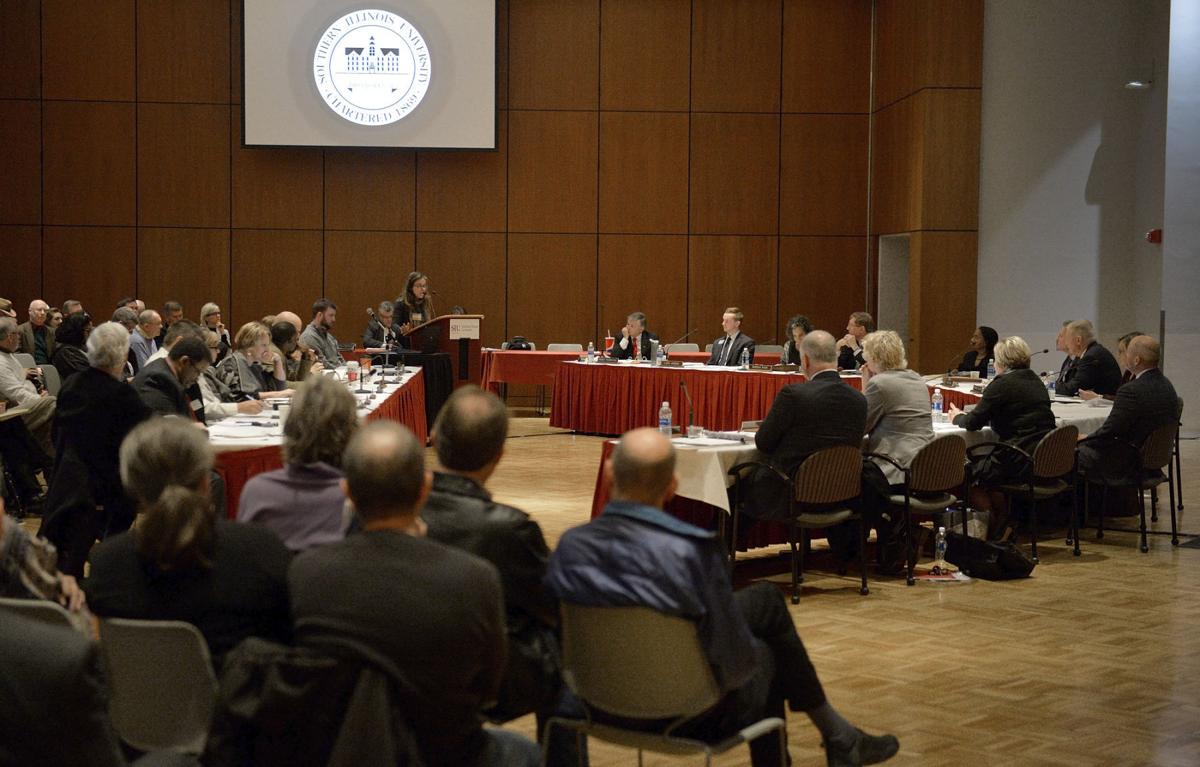 Natasha Zaretsky, a professor in the SIU History Department, speaks during the public comment portion of the SIU Board of Trustees meeting on Thursday in Carbondale. 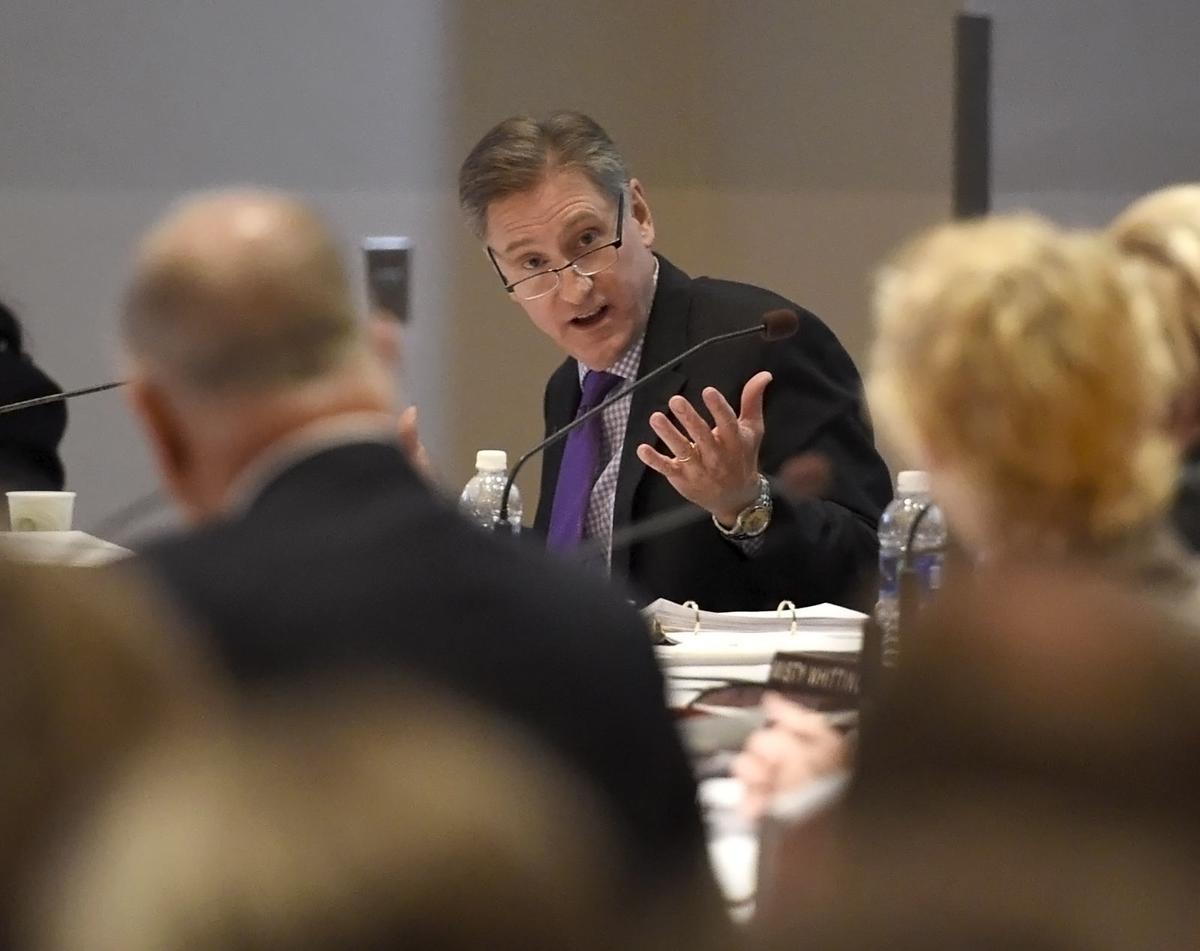 Former Southern Illinois University President Randy Dunn speaks during the SIU Board of Trustees meeting in December 2017 in Carbondale. 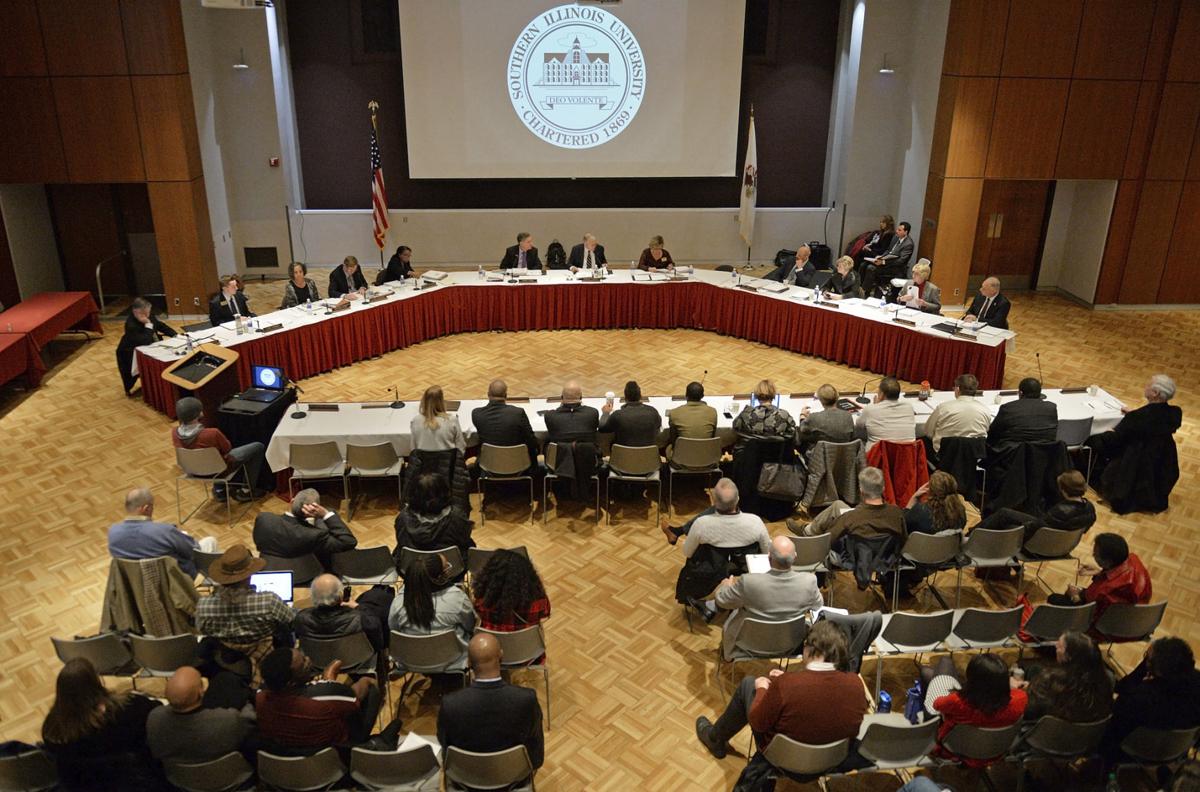 The SIU Board of Trustees meet in the Student Center Ballroom on Thursday morning in Carbondale.

CARBONDALE — Southern Illinois University Carbondale’s impending academic reorganization became the focal point of the SIU Board of Trustees meeting in Carbondale Thursday, despite appearing nowhere on the agenda.

During a fiery public-comment period, several speakers argued against SIUC Chancellor Carlo Montemagno’s plan to restructure the university by eliminating its 42 departments and housing programs in newly created schools.

Even at the tail-end of finals week, the board meeting drew a lively crowd of undergraduates, graduate students and faculty, filling the Student Center’s Ballroom B to capacity.

Critics raised concerns about the speed of the restructuring — Montemagno hopes to implement the changes July 1, 2018 — in addition to the unprecedented nature of the plan and what they called the administration’s “top-down" approach.

Vice Chair J. Phil Gilbert said he was surprised to learn at Wednesday’s work session that studies and reports conducted several years ago had found that SIUC should eliminate redundancies.

“Organizational change does not come easy. But in tough times and uncertain times, it’s necessary for the good of the future of this university, and I think everybody agrees that at least there need to be changes,” Gilbert said.

Trustee Marsha Ryan said reorganizing and revitalizing SIUC was what the board hired Montemagno to do.

“We asked for a vision and a strategic plan to be developed within six months, as we saw the need for haste in the face of rapid decline,” Ryan said. “ … There was a time, several years ago, when we had the luxury of time, but not the will. Now we have no time and we are required to find the will. Change, as you see, is hard, but change will come, either actively, like the plan, or passively, like the gradual decline and degradation we’ve been seeing. My personal preference is that we manage that changing quickly, lest it manage us.”

Early in the public-comments portion of the meeting, Faculty Association President David Johnson said people must work together to solve the university’s problems.

“What I fear is a reckless, hasty, top-down slew of changes that have nothing more than a leap of faith in an untested leader,” Johnson said. “What I fear is us wasting a year or more fighting about a grandiose, unprecedented, evidence-free restructuring plan that the chancellor himself has admitted won’t fix our enrollment problem, instead of coming up with shared solutions that will fix it.”

Natasha Zaretsky, an associate professor of history and a member of the Coordinating Committee for Change — a group formed in opposition to the restructuring plan — said the chancellor’s proposal raises questions about whether the dissolution of the university’s 42 departments will help SIUC’s enrollment crisis.

“The problem to date is that the chancellor has not been able to answer any of these questions. He’s provided no data, no evidence, no models and no best practices that he can cite to back up his plan,” Zaretsky said.

Faculty Senate Chair Kathleen Chwalisz said she was “embarrassed” by the way some faculty members were responding to the restructuring plan.

“There are people who are sort of shaping the conversation, and it’s a relatively small group of faculty. … I see more negative energy coming out of (the CCC) than I see positive,” Chwalisz said.

Lauran Schafer, a representative of Graduate Assistants United, criticized Montemagno for his plan to no longer allow graduate students to serve as instructors of record. She questioned the idea that elimination of departments will solve the university’s enrollment crisis.

“It is asinine to say that people are not coming to this university because it has a structure like most universities,” Schafer said, adding that SIU Edwardsville has not been plagued by the same enrollment problems.

Vicki Carstens, chair of the linguistics department, said she would not have come to an institution without departments as a graduate student and that she worries that the change will have a negative impact on enrollment.

“The chancellor seems confident of this course of action, though, and has asked that we ‘just trust him’ to know what’s best for this campus. Like most academics, I prefer to base my trust on evidence,” Carstens said.

Speaking to reporters after the meeting, Montemagno addressed the repeated claims by faculty and students that they have been shut out of the decision-making process.

“I have met with virtually every constituent person there who has spoken and issued that,” Montemagno said. “The faculty and the students also have provided me numerous input, both to me personally through emails and online. So all their voices are being heard. We have official constituency meetings, and I meet with all of them in those constituency meetings. So we are engaging with them dynamically and in discussion, and so I’m actually perplexed why they would feel that way. Obviously I need to redouble my efforts at reaching out to many of the constituents, but we are reaching out to all of them, and they have all had meaningful input into the plan as it evolved.”

The chancellor said that his plan was a “natural outgrowth” of the 2012 and 2013 studies referenced by Trustee Gilbert in the meeting.

“There comes a time when you have to stop studying and engage in action,” Montemagno said.

Despite all the negative feedback, Montemagno said he was “feeling really good about what’s going on.”

“We have probably, I’m just guess-timating, but probably 70 percent of the response I’ve gotten has been positive, and it’s only a very, very small number that are negative, and the negative ones are usually not focused on the entire plan. They’re usually focused on small elements of the plan … but in general there’s significant, overwhelming support, from both here and off-campus in particular,” he said.

Also at Thursday’s meeting, the board approved the appointment of John Shaw as director of the Paul Simon Public Policy Institute, with an annual salary of $160,004 effective January 16, 2018.

SIUC Chancellor Carlo Montemagno raised eyebrows when he likened the university in its present form to a battered Yugo — commonly considered one of the worst cars ever made.

CARBONDALE — In what was dubbed a community conversation, community members and Southern Illinois University Carbondale faculty members got to…

SIU Chancellor Carlo Montemagno speaks during the SIU Board of Trustees meeting on Thursday morning in Carbondale.

Natasha Zaretsky, a professor in the SIU History Department, speaks during the public comment portion of the SIU Board of Trustees meeting on Thursday in Carbondale.

Former Southern Illinois University President Randy Dunn speaks during the SIU Board of Trustees meeting in December 2017 in Carbondale.

The SIU Board of Trustees meet in the Student Center Ballroom on Thursday morning in Carbondale.