CARBONDALE — Southern Illinois University Carbondale has fewer freshmen and fewer total students again this year, though the losses are smaller than in the recent past and come alongside several positive trends that could signal early improvements or simply rock bottom.

New student enrollment, meanwhile, fell 8.47% to 1,037, though that’s significantly less than in years past. The university had seen at least 17% drops in each of the last four years, including a drop of 18.8% last year.

“We’ve been up front with people for several months now that we anticipated being down,” this year, said SIUC Interim Chancellor John Dunn, as the senior class that graduated last year was more than three times the size of recent freshman groups.

“Everyone needs to understand that our population locally is decreasing in terms of high school graduates,” Dunn said. Meanwhile, overall college enrollment in the U.S. is down eight years running, and a 50-year trending decline in the birth rate means fewer potential students each year.

Illinois universities, meanwhile, continue to battle back from the budget crisis, which disadvantaged them against out-of-state peers, Dunn said, and international enrollment, where SIUC has traditionally thrived, has become significantly more competitive in recent years, just as stricter visa policies make it tougher for students from some countries to enroll in the U.S.

“The good news is we are making progress,” Dunn said. “It’s really tough to get back up the hill.”

Retention is trending upward at SIUC, with 75% of last year’s freshman class deciding to stay for their sophomore year. Last year, that number was 71%, and 67% the year before.

“It’s way up from where it was four or five years ago,” Dunn said. “We’ve also seen an increase in our sophomore to junior retention rate, which continues that desirable line.”

The yield rate, which measures the number of admitted students who pick SIUC over other options, increased from 24% to 27%, suggesting the university did a better job of convincing its prospects.

“Back in February we had a large campaign where we asked faculty to get involved and to call students who had been admitted,” she said. “The students that we were able to reach, we have some data that show that those students were 8% more likely to enroll here after having received that phone call.”

That could indicate the university is enrolling students who are better prepared for the rigors of college, or simply that with smaller freshman classes, the ACT scores of the highest achieving scholarship recipients become more statistically significant.

With an eye to the future, the university has made significant investments in recruitment in the last year, Dunn said, including $1.2 million in new software tools that help the university engage with prospective students via text and email, providing them information that’s personalized to their interests.

It has inaugurated new recruitment events, like SIU Day, a twice yearly campus-wide open house for local high schools, and changed the structure of its recruiting office to place two full-time recruiters in Chicago and one in St. Louis.

SIU Carbondale to add recruiters on the ground in St. Louis, Chicago

The university has promoted internally to fill four chief academic adviser positions, each in charge of one of SIUC’s colleges, according to Interim Provost Meera Komarraju, and is now hiring to fill the four adviser positions left open, plus an aviation department adviser.

The admissions office is also hiring for three vacant positions, DeHaemers added — two entry-level recruiters and one associate director for recruitment— which she hopes to fill within two months.

“There’s a campus life element to where we need to go as well, and I think this is a great example,” Goldsmith said.

Despite the decline in students, Dunn expects no downsizing this year, he said.

“We don’t anticipate any layoffs,” he said, nor building closures or curriculum changes.

Total enrollment at SIU Edwardsville is down 1.6% over last year, to 13,061, while the freshman class is about 2% smaller at 1,667. Freshman retention at SIUE was recorded at a record high at 79%, per a news release from the university.

Murray State University reported an increase of 7.7% in new students to 1,420 students. The university’s freshman class had been down nearly 9% the previous year.

Voice of The Southern: The good and the bad inside SIUC's enrollment 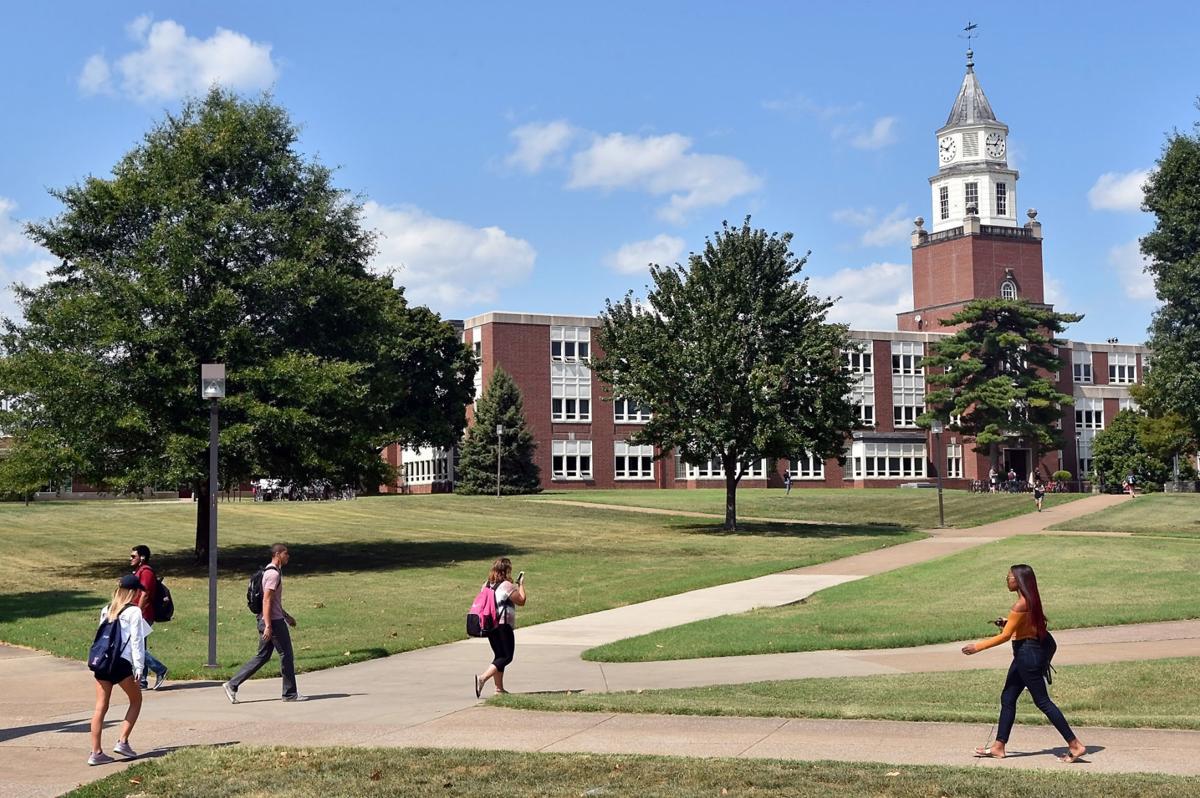 Pulliam Hall is seen in the background as students walk between classes at SIU in September 2017.