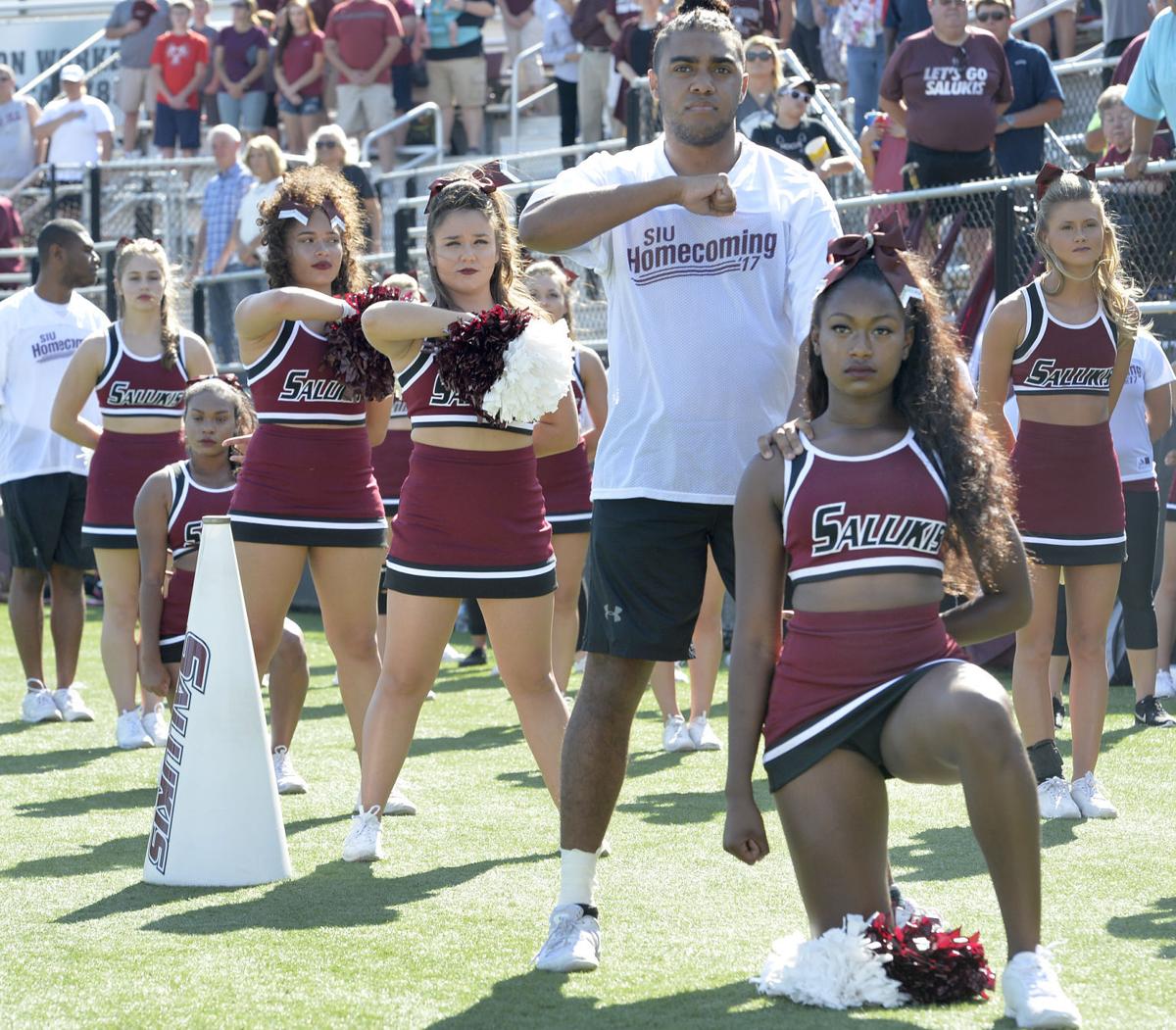 SIU cheerleaders Alaysia Brandy (right) and Czarina Tinker kneel during the national anthem prior to the Salukis' game against Illinois State at Saluki Stadium on Saturday. 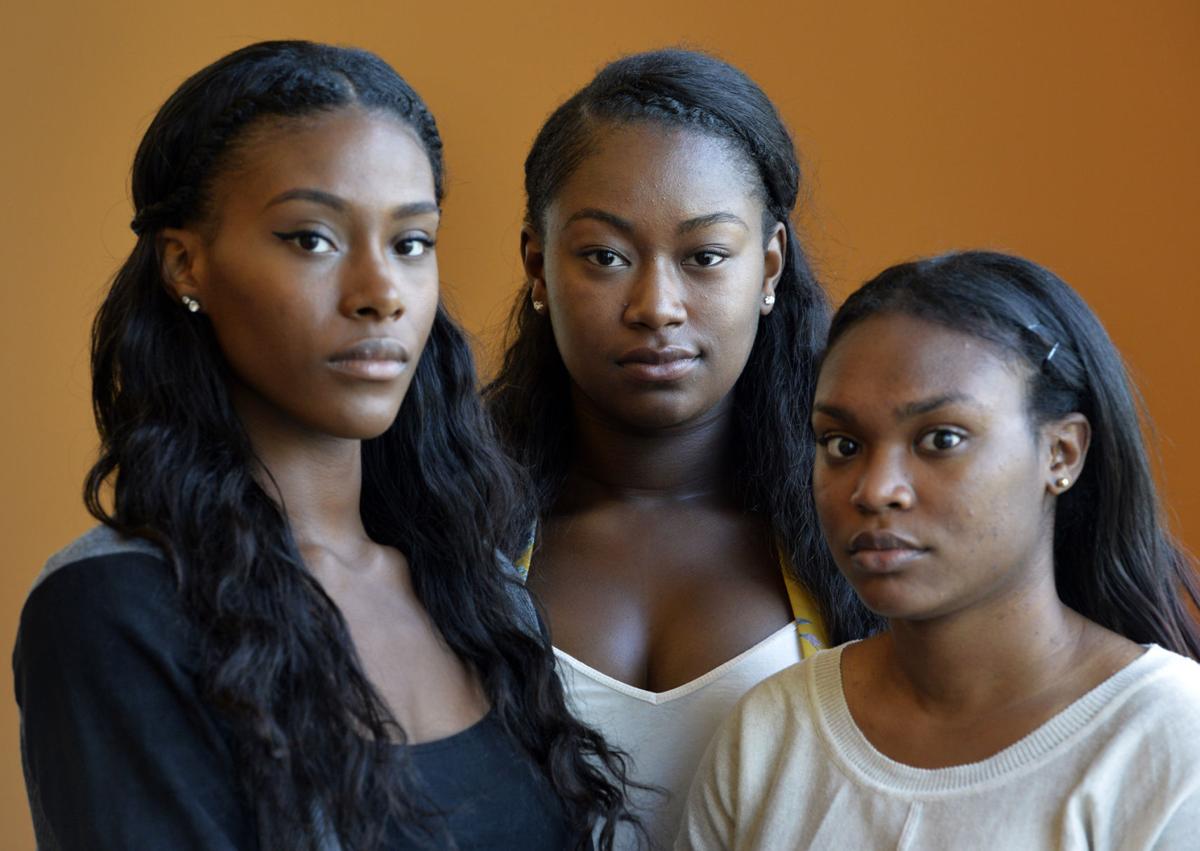 SIU cheerleaders Ariahn Hunt (left), Alaysia Brandy (center) and Czarina Tinker knelt in protest during the national anthem at the Salukis' football game on Sept. 30 and have been receiving praise and backlash ever since. 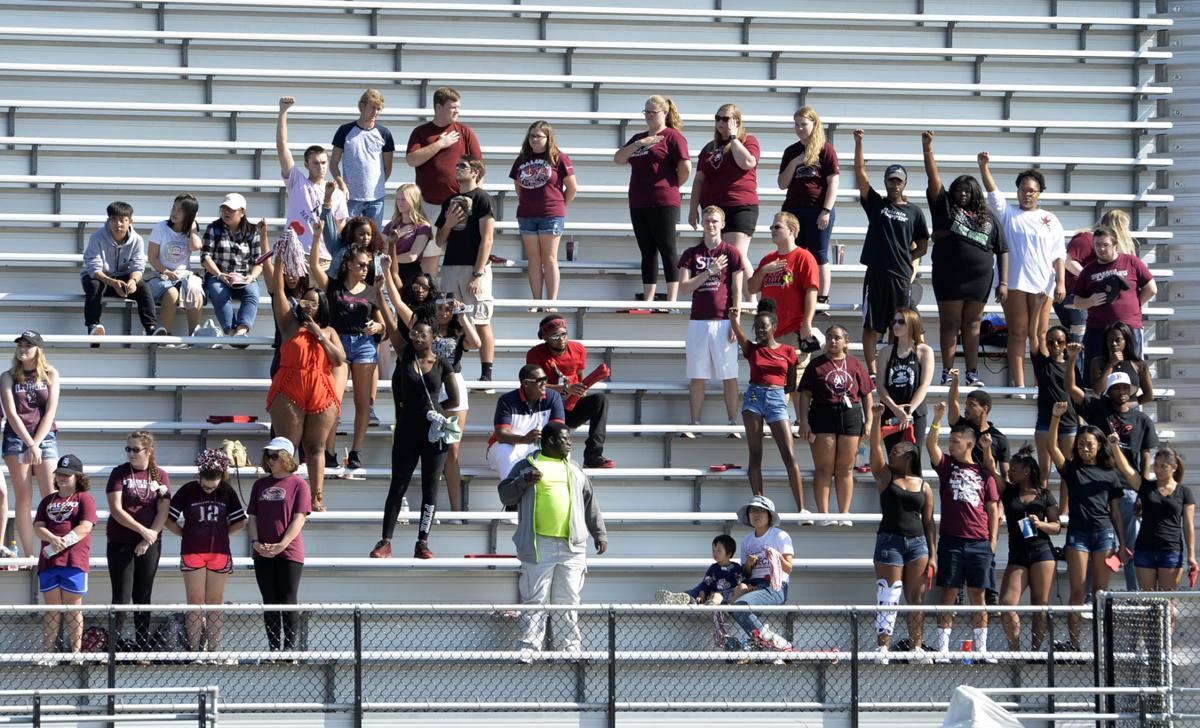 SIU students raise their fists during the national anthem prior to the Salukis' game against Illinois State at Saluki Stadium on Saturday.

CARBONDALE — Three Southern Illinois University cheerleaders say they faced a barrage of threatening comments on social media after they took a knee in protest of police brutality during the national anthem at a Saluki football game last month.

In an interview last week, Alaysia Brandy, Ariahn Hunt and Czarina Tinker said they were startled by the vitriol that followed their decision to kneel during the anthem at the Sept. 30 SIU vs. University of Northern Iowa game in Saluki Stadium.

Comments on posts linking to a Daily Egyptian article about the Saluki cheerleeders' protest included death and rape threats, they said.

“Just the extent of how disrespectful some of the comments got was really astonishing, and there’s the fact that we live down the street from some of these people — these people go to our school,” said Hunt, a psychology major from Chicago.

Brandy, who is studying biological sciences and is also from Chicago, agreed that while some people have expressed support, many of the responses have been unsettling.

“These people know our faces and names now. And we’re getting death threats and sexual assault threats, and being called the N-word so many times,” Brandy said.

Benjamin Newman, director of the SIU Department Public Safety and chief of police, said in a statement that the department began an investigation of the reported threats as soon as it learned of them.

“Investigators met individually with students reporting the threats and reviewed a number of social media accounts. The investigation found that none of the members of the squad were the subject of direct threats, and no other credible threats have been identified,” Newman said.

The investigation is ongoing and officials will “continue to monitor social media sites and other outlets to identify and respond to potential threats,” he said.

The three students, all sophomores, said they have been relying on each other for support. They check in frequently to make sure the others are doing OK emotionally.

“I was taken aback by reading those words. … These are adults. I know we say we’re adults, but we’re all 19. These are (people) in their 40s who speak this way about children,” Brandy said.

When Brandy first brought up the idea of taking a knee ahead of the Sept. 30 game, Hunt and Tinker were immediately onboard. The three of them are the only African-American cheerleaders on the team.

Tinker, who is from Nashville, Tennessee, and studies radio, television and digital media with a concentration in sports media, said she felt a need to take a stand against racial injustice.

“… Police brutality is something that’s been going on for a long time, and nothing has been done, and I feel like it’s very important for me to at least be getting my voice out there, to say, ‘Hey, this has been happening and nothing’s changing,’” Tinker said.

“I think we all agreed that we have a public face and we have a voice on this campus, so we all have participated in protests before, but this is one of the greatest ways that we could be seen and make it known and make it a big deal,” Hunt said.

Before they walked out onto the field on Sept. 30, they prepared themselves for a range of possible outcomes, from getting yelled at to getting kicked off the field.

“I was so nervous. My heart was beating so hard,” Brandy said. “I actually told the girl behind me — because we do a ripple-off into the National Anthem and putting our hand over our heart — I whispered to her, ‘No matter what I do, just keep rippling!’ And she was like, ‘Oh, you’ll be fine. Just follow the person in front of you.’ And I’m like, ‘Oh … she doesn’t know.’”

Hunt said an administrator in the athletic department told them that the department received complaint calls during the national anthem and that some people canceled their tickets immediately.

Director of Athletics Tommy Bell denied that account; he said one person had requested a refund for their ticket to the Family Weekend game.

“Since the game, I’d estimate I’ve received about 20 or so calls or emails related to the national anthem, but no requests to cancel tickets,” Bell said in an email, adding that the complaints he’d received about the protest were “extremely respectful.”

At morning workouts the next day, other members of the squad avoided them, the young women said.

“You could feel the tension,” Tinker said.

The squad discussed the issue at a meeting during the next practice. The meeting lasted three hours, they said.

“At the end, we got through to a lot of people, which kind of made us feel good, like they understand us … but at the end, we kept repeating ourselves, and we weren’t giving them the answer that they wanted,” Hunt said.

“Which was to stand,” Brandy said.

In a statement provided to The Southern, SIUC Chancellor Carlo Montemagno said the university supports students’ right to free speech.

“SIU Carbondale encourages all members of its community to respect the flag and our national anthem,” he said. “We also understand that these two important symbols stand for one of our most important Constitutional rights: freedom of speech. The university must ensure that all members of the community have the right to express their views safely and peacefully, whether or not others agree with those views or the means being used to express them.

“As an educational institution, we can help students find constructive ways to engage the campus in dialog about issues of importance. I have invited the cheerleaders to think about ways students can work with us to help build programming about racial inequalities that will contribute to awareness and understanding. I look forward to their input.”

“We respect the flag and our national anthem and hope that all those who represent us do so, as well. We also respect our students’ right to free speech. Since the national discussion about the anthem protests began, we’ve engaged our coaches, student-athletes and administrative staff in on-going dialogue about how best to address this controversial topic. I’m extremely proud of our approach. While we have individuals who are sympathetic to one side or the other, I believe we are united in our respect for this country and the opportunities we’ve been afforded,” Bell said.

Brandy said that since the publication of the Daily Egyptian article, she’s found herself having the same argument with people over and over again.

“They’re just like, ‘Your protest has nothing to do with the flag,’ but it has everything to do with the flag. The flag is a representation of America. It shows that we stand, we’re the land of equality and liberty — but we’re not free, we’re not equal. We’re treated as less than, still. It’s 2017, and for you to sing this National Anthem and to actually mean these words, we want it to be true,” Brandy said.

“We’ve gotten, ‘You guys aren’t being discriminated against. You guys are on the cheerleading team. You guys have all of this money. You have all of these opportunities.’ Or, ‘If you guys are protesting, why don’t you protest black-on-black crime back in Chicago?’” Hunt said.

“And we do,” Brandy responded. “Please note this now, we tell our community that we can’t matter until we treat each other as such. We still have this slave mentality, we still judge each other on our skin shades, like, ‘Oh, you’re light-skinned, you’re dark-skinned, so who’s better.’ We’re still fighting against each other, and we still tell the community we have to come together for people to see us as a united front. We tell our community that all the time. But the people saying this are the Caucasians — you’re not a part of our community, so you wouldn’t hear us saying this to our community. What you hear is what you need to fix.”

Brandy, Hunt and Tinker said they have no plans to discontinue their protest for the foreseeable future.

“People are making it seem like we’re acting out. We’re on our knees, we’re not saying anything, we’re just kneeling. It’s a peaceful protest,” Tinker said.

She added that she hopes that Saluki fans who have been posting negative comments make good on their promises to stop attending games — she said she'll feel safer that way.

Asked if she was intimidated by the backlash, Brandy replied, “We’re aware. But they’re not going to scare us.”

CARBONDALE — Weeks after three Southern Illinois University cheerleaders made headlines for taking a knee during the national anthem, a change…

CARBONDALE — Since a handful of folks started meeting once a week to discuss topics of race, more than 100 different people have showed up for…

Many know Alaysia Brandy as the cheerleader who has taken a knee during the anthem at SIU football games, to protest police brutality against African-Americans. She’s also a pre-med student, with minors in chemistry and Spanish, who strives to stay active in the Southern Illinois community she adopted when she came to SIU Carbondale.

SIU President Dan Mahony is calling for an exhaustive review of policies, practices and curriculum at all three of the system's campuses in an effort to upend systemic racism and identify new ways to bolster diversity and inclusion.

SIU cheerleaders Alaysia Brandy (right) and Czarina Tinker kneel during the national anthem prior to the Salukis' game against Illinois State at Saluki Stadium on Saturday.

SIU cheerleaders Ariahn Hunt (left), Alaysia Brandy (center) and Czarina Tinker knelt in protest during the national anthem at the Salukis' football game on Sept. 30 and have been receiving praise and backlash ever since.

SIU students raise their fists during the national anthem prior to the Salukis' game against Illinois State at Saluki Stadium on Saturday.