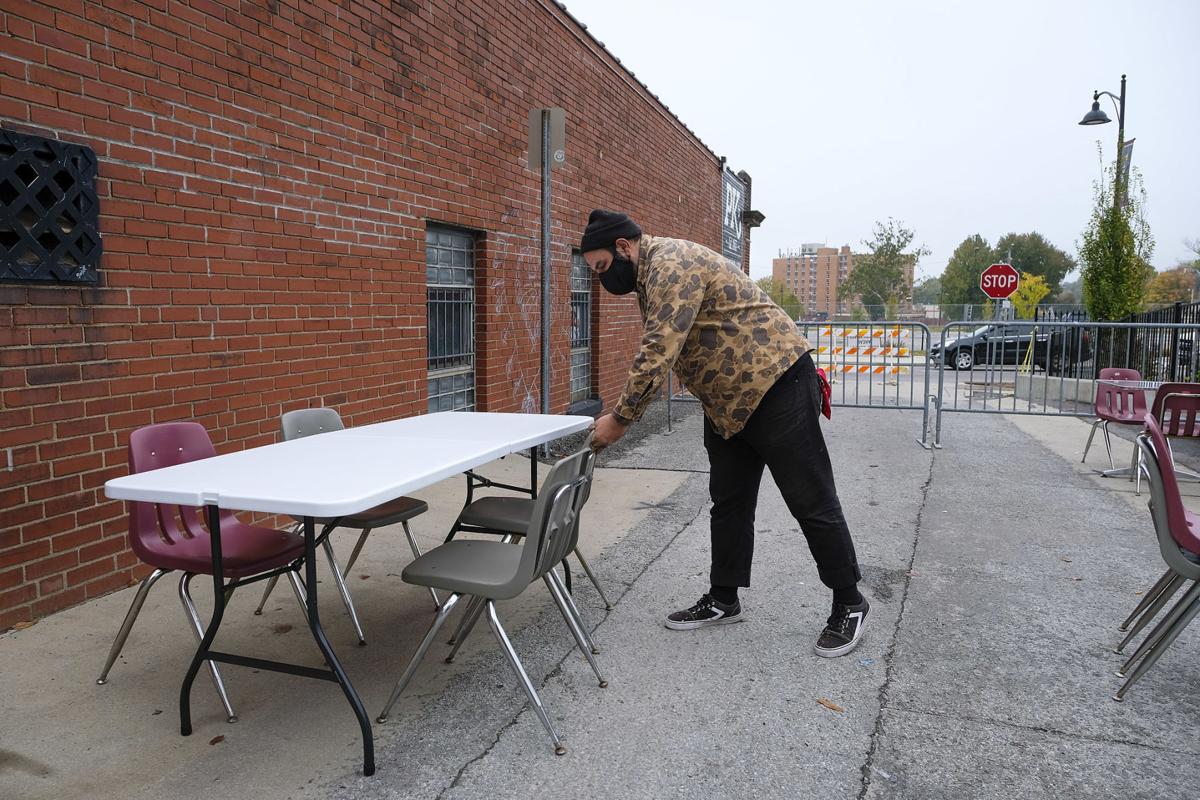 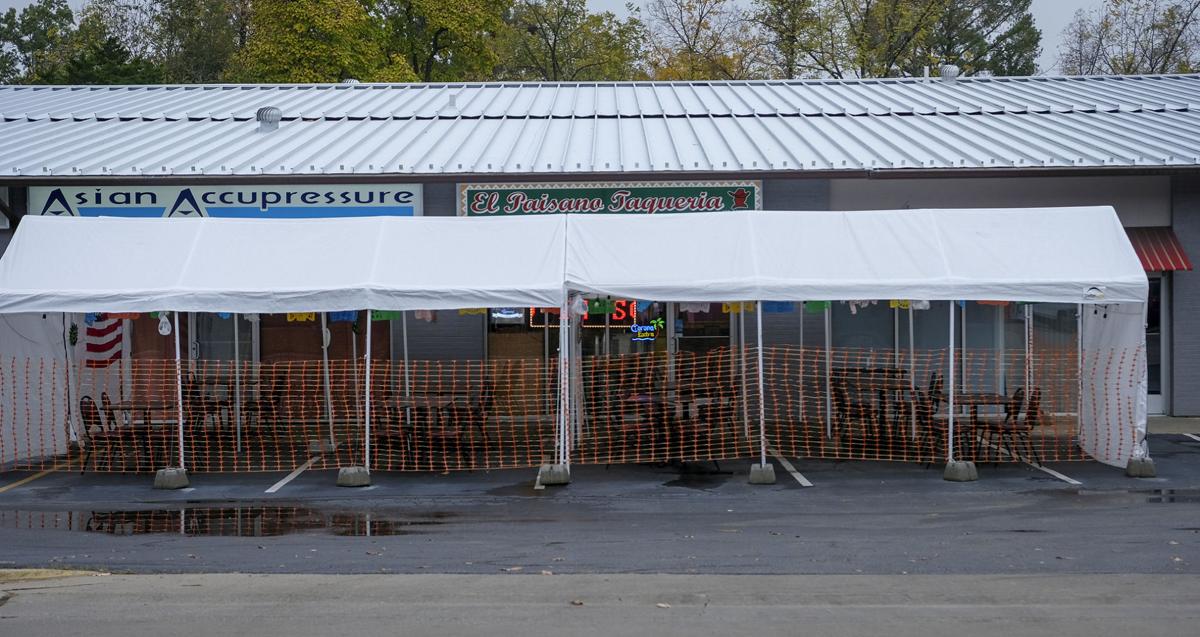 CARBONDALE — Southern Illinoisans in the service industry are feeling a bit of whiplash after Gov. J.B. Pritzker and the Illinois Department of Public Health announced Monday that further mitigation measures would be put in place in the region to control COVID-19.

Pritzker said Monday that Region 5, which includes all of Southern Illinois, had exceeded the IDPH’s threshold for positivity rates — under the state's coronavirus plan, if a region stays at or above an 8% rolling seven-day average positivity rate, mitigation measures are put in place. The latest rolling average positivity rate for the region released Tuesday was for Oct. 17 and was 8.6%.

As part of the state's mitigation measures, beginning Thursday, restaurants and bars will go back to outdoor dining and pickup only. Previously, they could host customers inside with limited seating and spaced-out tables. To get out of this mitigation stage, the region as a whole has to stay at or below a 6.5% positivity rate for three consecutive days, according to IDPH guidelines.

In Carbondale, the announcement means restaurant and bar owners have had to, once again, figure out how to make due with less. Taylor Vaughn is the general manager at Tres Hombres in Carbondale. She said even under ideal circumstances, it’s hard to make ends meet with just outdoor seating. She said that only means about 12 tables for her restaurant.

“It’s definitely not easy,” she said of justifying staying open. But, she said, they are committed to try.

“We usually gave things about a couple weeks before we made any rash decisions,” Vaughn said. She said it would be great if it were at all convenient to just shut down until things clear up with COVID.

“It really makes you want to be able to do that,” Vaughn said of closing up.

Doug Robinson’s popular Keepers Quarters has been shuttered for months as he made the decision early on that outdoor dining and limited indoor seating weren’t cutting it. There have been a few pop-up opportunities for customers to come in and grab a bite, but not the robust service he nor his customers were used to.

Robinson said his weekend coffee and pastry events will still happen. But everything else is up in the air. He said Saturday’s five-course beer pairing event with Scratch Brewing Co. has been canceled. Disappointing as that is, Robinson said he’s just resigned to the fact that nothing will seem normal until after COVID-19 is behind us.

“It is what it is. We’ve just got to get this thing over with,” Robinson said.

Walter Wit, owner of Carbondale bar PK's, said the rules for his bar will likely just go back to what they were in Phase 3 of the state’s Restore Illinois plan for controlling COVID-19. But, he said, if that’s not worth it, they might just have to close the doors.

“If no one wants to come out regardless … there’s a good chance we might just close down regardless,” he said, noting that weather could be a factor in whether people come out.

Mama Pang’s, which sells food from the PK's kitchen, said on Facebook it will be serving to-go orders beginning Thursday.

“Our region has been moved into mitigation based solely on the COVID-19 positivity rate. We believe the positivity rate metric is not a reliable indicator of the need for mitigation as it is dependent on the number of tests conducted in the region,” the statement said.

They also noted how the mitigation measures will impact businesses in the region, and they criticized the amount of notice Pritzker gave Region 5 before the measures went into place. They said less than a week’s notice in Region 5 is far less than the two weeks' notice Prtizker gave to the Metro East.

After the announcement Monday of mitigation measures being put in place, the City of Carbondale revised its guidance on trick-or-treating.

“The City of Carbondale is now discouraging door-to-door trick-or-treating,” a news release from the city reads. It said those who do decide to go door-to-door or hand out candy should practice social distancing and other safety measures.

In Marion, Mayor Mike Absher said there will be no limitations or restrictions on trick-or-treating in the city. He said this is because the IDPH did not alter its guidance.

Absher made a video address to his constituents following Monday’s announcement. He called on restaurant and bar owners who plan to have outdoor seating to use tents and to space appropriately and to use heaters. He also encouraged business owners to apply for the new Business Interruption Grants offered by the state.

According to the IDPH news release, businesses and communities in Region 5 will receive priority consideration for the current round of Business Interruption Grants due to the greater restrictions

Absher also made a request for citizens to be tested, no matter how they are feeling.

“Please go get a test, even if you are healthy,” Absher said. “It simply helps us get below that 8% threshold.” He noted that the capacity of local health care networks to test large numbers of people has greatly increased in the time since the pandemic began.

However, Jackson County Health Department Administrator Bart Hagston said these testing resources are not readily available enough to accommodate a surge in testing like this.

“The level of testing capacity needed to handle a sudden dramatic surge in testing is just not available, especially in rural counties which lack significant healthcare infrastructure,” Hagston wrote in a message to The Southern.

“When testing can be accessed easily by those who legitimately need it, the thought is that the positivity rate will tend to stay lower over time,” he wrote.

Illinois officials have released trick-or-treating guidelines. Here are the highlights.

Much as it did with this year’s pride celebration, Carbondale’s Rainbow Cafe has had to make a change in plans for its annual gala and fundraiser because of COVID-19.

Republicans in the Illinois House and Senate pushed back Wednesday against Gov. Pritzker’s efforts to mitigate the spread of COVID-19, arguing that lawmakers should be involved in crafting the state’s response to the pandemic.

A Kane County judge’s ruling this week that temporarily allows indoor dining for one restaurant in the region is headed to a state appellate court.