SPRINGFIELD — Hospitalizations for COVID-19 in Illinois declined significantly over the holiday weekend and into Monday, touching their lows since the state began reporting the figures daily in April.

Of those hospitalized at the end of Sunday, 321 were in intensive care unit beds, the second-lowest number reported by the Illinois Department of Public Health during the pandemic’s presence in Illinois. The 304 reported at the end of July 4 marked the lowest in one day.

Ventilators in use by COVID-19 patients at the end of Sunday fell to 151 — the lowest IDPH has reported thus far.

The state also reported just six new COVID-19-related deaths each on Sunday and Monday, marking a low since March 25. That’s after death counts of 10 on Saturday and 17 on Friday.

Sundays and Mondays, historically, have had lower casualties reported by IDPH than the rest of the week throughout the pandemic, however, and IDPH warns in its daily releases that all data “are provisional and will change.”

A disclaimer reported daily reads: “In order to rapidly report COVID-19 information to the public, data are being reported in real-time. Information is constantly being entered into an electronic system and the number of cases and deaths can change as additional information is gathered.”

The seven-day rolling positivity rate remained at 2.6% Monday for the seventh straight day after ticking downward from 2.7%.

Monday’s one-day rate was 2.9%, however, as the state reported 614 new cases among 21,134 test results reported, a lower-than-normal number coming out of the holiday weekend.

From Friday through Sunday, the state reported 868, 862 and 639 new cases each day with one-day positivity rates ranging from 2.3 to 2.5. Average daily test output for the three-day span was more than 31,000.

Thus far, there have been 7,026 COVID-19-related deaths reported by the state among 147,865 total confirmed cases. There have been 1.78 million tests results reported.

The recovery rate for those 42 days removed from a positive test is 94%, according to IDPH.

IDPH reports the rolling positivity rate in Region 4 of the state’s COVID-19 plan — which includes the Metro East — reached 7.8% as of July 25, slightly less than the 8% mark that, if sustained for 3 days, would necessitate state intervention to mitigate the virus’ spread. 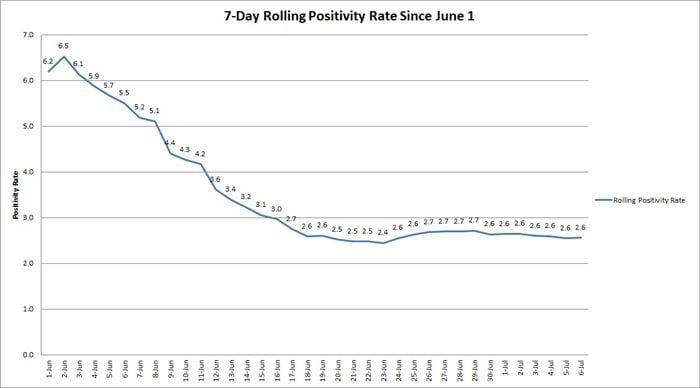 This graph shows the rolling 7-day positivity rate for tests completed starting on June 1. Illinois Department of Public Health data was used to calculate the averages. 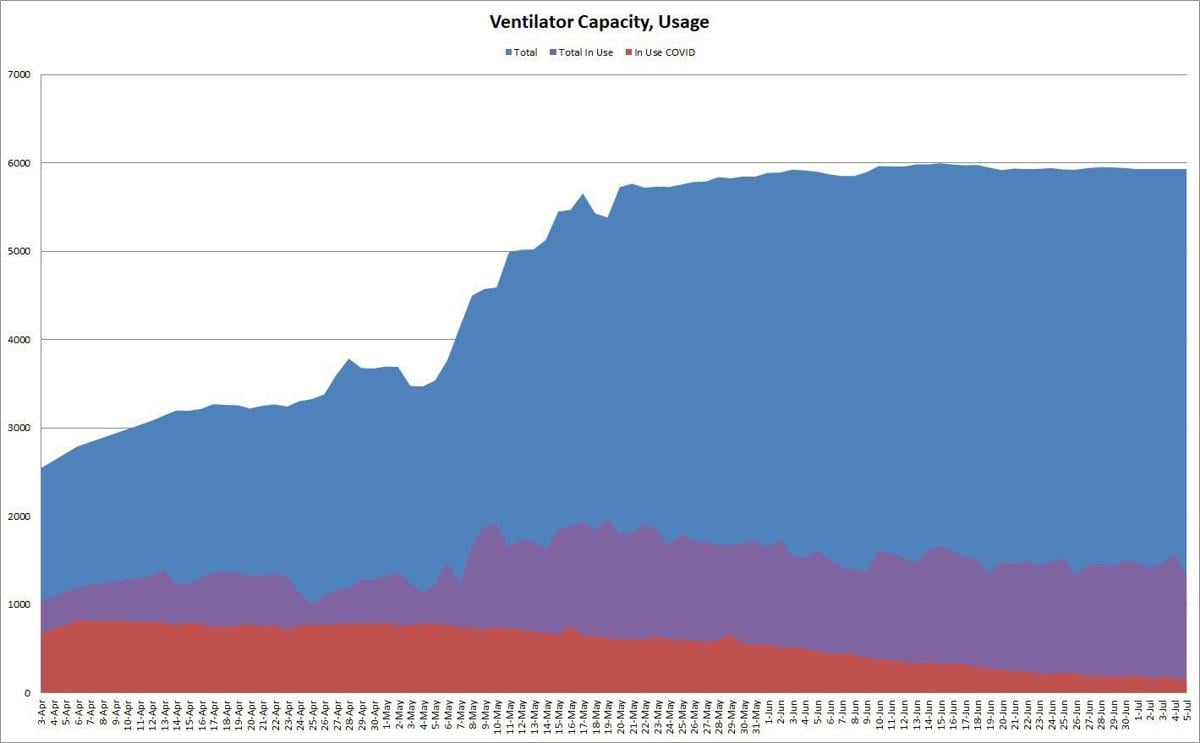 This graph shows the number of ventilators in use by COVID-19 patients, non-COVID patients and the availability rate of ventilators throughout the pandemic. 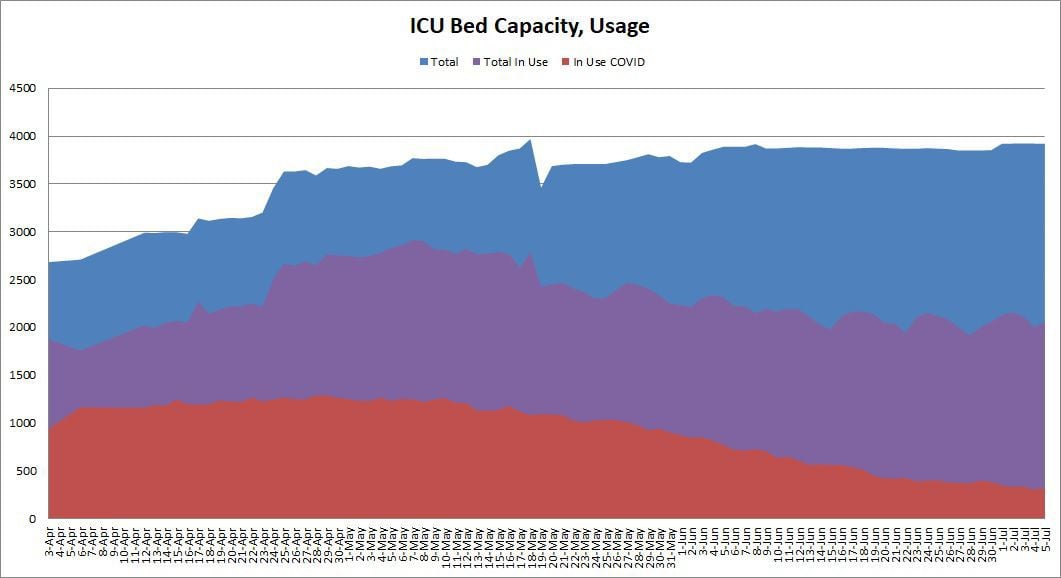 This graph shows the number of intensive care unit beds in use by COVID-19 patients, non-COVID patients and the availability rate of beds throughout the pandemic. 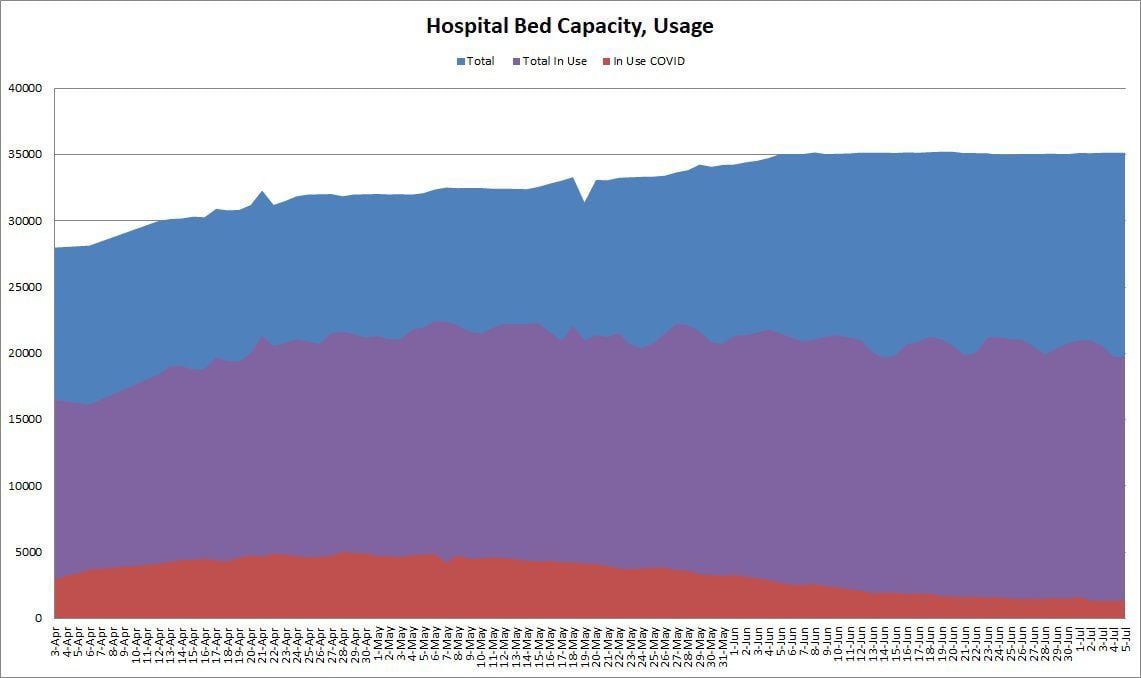 This graph shows the number of hospital beds in use by COVID-19 patients, non-COVID patients and the availability rate of beds throughout the pandemic.