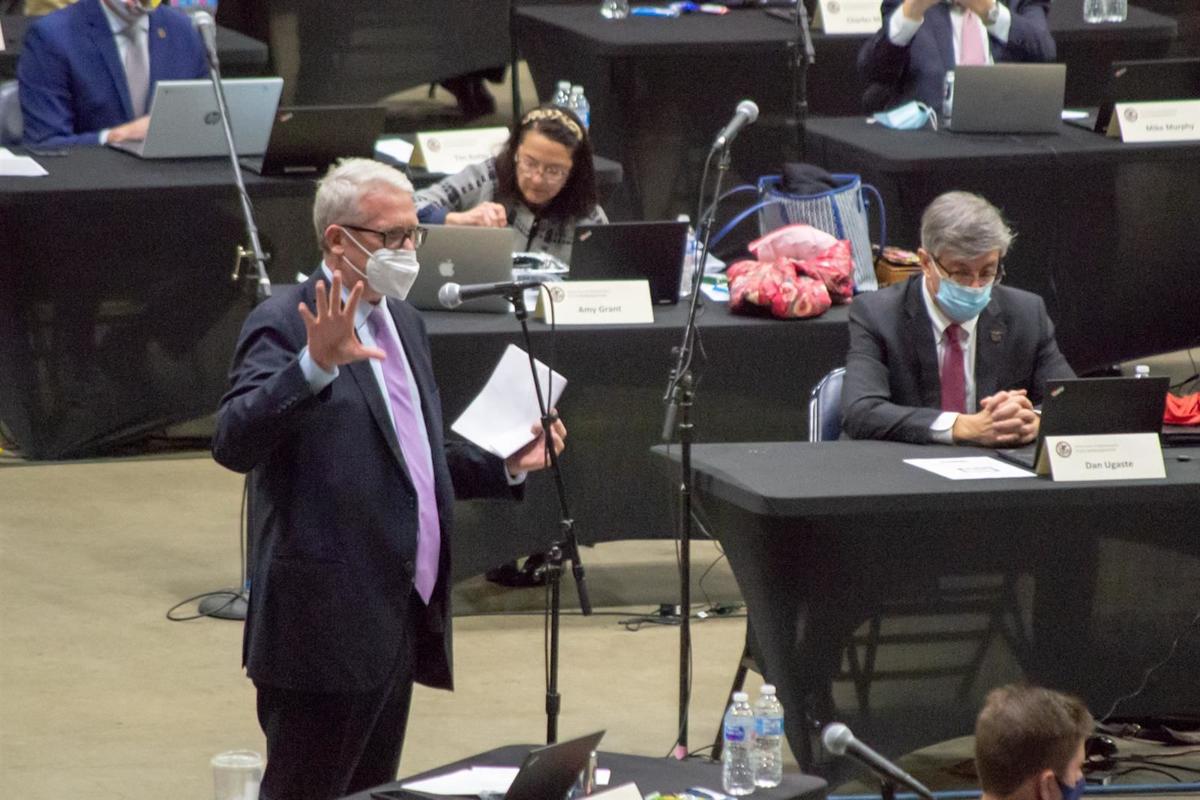 House Minority Leader Jim Durkin, R-Western Springs, speaks on the floor of the Bank of Springfield Center in Springfield on Friday, requesting increased access for reporters covering the session. A handful of reporters were allowed on the mezzanine level of the 7,700-seat convention center. 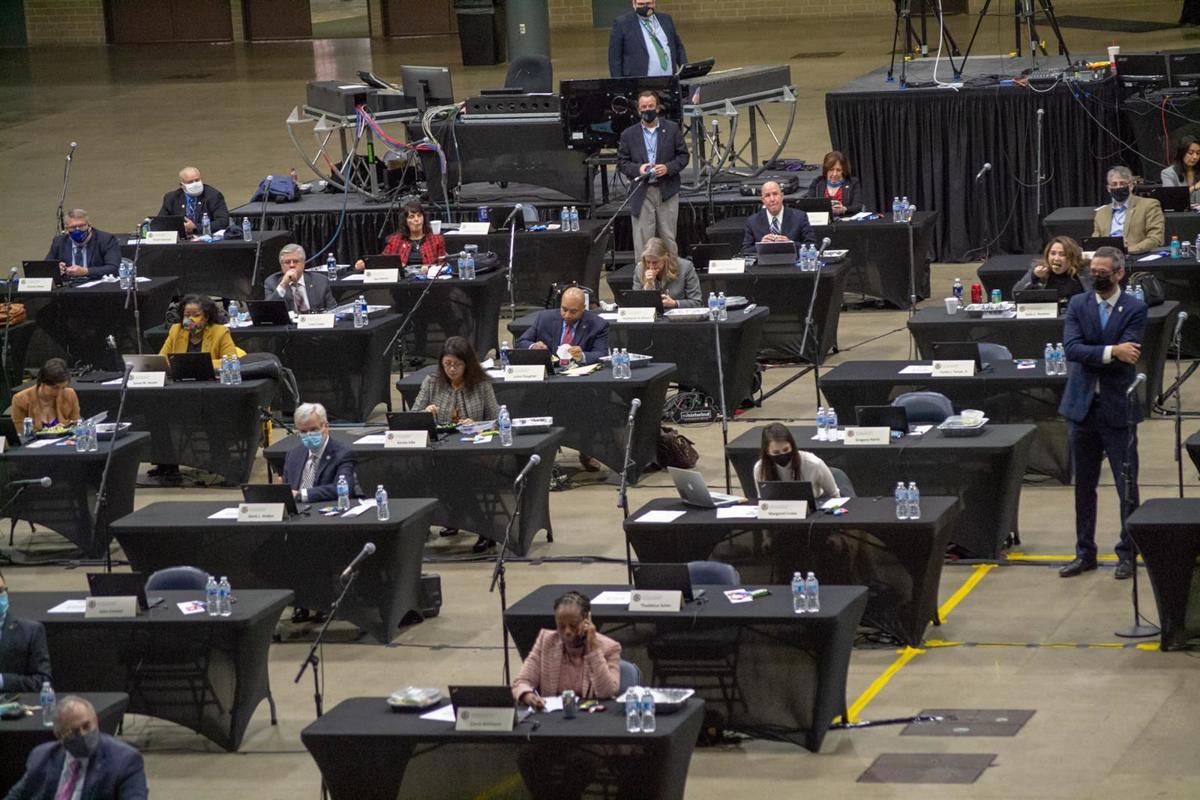 SPRINGFIELD — Illinois House lawmakers were back in the capital city Friday for the first time since May, kicking off a five-day “lame duck” legislative session.

No substantive action was taken in the brief House session Friday, which began with Republican Minority Leader Jim Durkin, R-Western Springs, requesting greater access for members of the media in the Bank of Springfield Center which hosted the session. Only a handful of reporters were allowed on the second level of the 7,700-seat arena due to strict COVID-19 restrictions.

The venue is the same as it was in May, but reporters had requested better access to lawmakers on the floor of the center. No such expanded access was granted Friday.

Shortly after convening, Democrats called for a closed-door caucus meeting to discuss an expansive criminal justice reform measure and other priorities of the Illinois Legislative Black Caucus.

Prospective candidates to unseat House Speaker Michael Madigan, who has held that position for all but two years since 1983, were also scheduled to make their case in the private caucus meeting. Stephanie Kifowit, D-Oswego, Kathleen Willis, D-Addison, and Ann Williams, D-Chicago, are the three declared challengers to Madigan.

At least 19 members of the House Democratic caucus have said they will not support Madigan, putting him several votes shy of the 60 needed to retain the gavel. The 102nd session of the General Assembly is set to convene Wednesday, following adjournment of the lame duck session, at which point a speaker must be chosen before substantial action can be taken.

The Senate was set to convene for committees Saturday and full floor action Sunday.

Gov. J.B. Pritzker also announced his top priority for the lame duck session, a series of tax changes that he says would save the state about $520 million for this fiscal year.

The bulk of that, roughly $500 million, would come from decoupling a portion the state’s tax code from the federal tax code so that business tax cuts approved by Congress as part of the Coronavirus Aid, Relief and Economic Stimulus, or CARES Act, last year would not automatically reduce Illinois state revenue.

Without decoupling, the governor’s office said, those changes at the federal level would automatically reduce the amount of business income that is taxable by the state of Illinois.

Pritzker also announced that he is unilaterally delaying the effective date of certain business tax credits that the Illinois General Assembly passed in 2019, and which were scheduled to take effect Jan. 1, as part of a package known as the Blue Collar Jobs Act. Those involved expansions of certain tax credits that businesses could take for relocating to Illinois or expanding existing facilities in the state.

“Right now, we cannot afford to expand tax breaks to businesses that already receive tax breaks,” Pritzker said in a news release. “As we recover from the pandemic, we must focus on job creation and balancing our state budget.”

But House Republicans, especially those who helped negotiate the Blue Collar Jobs Act, said Pritzker’s actions would hurt small businesses that have been severely affected by the recession brought on by the COVID-19 pandemic and would ultimately make Illinois less economically competitive.

“That’s precisely the kind of tool that we’ll need as we emerge from the pandemic and the entire world starts to rebuild the economies that have been so profoundly impacted by these closures,” Rep. Tom Demmer, R-Dixon, said during a news conference.

Meanwhile, in a committee hearing on the BOS Center floor, lawmakers advanced Senate Bill 54, which allows for the home delivery of liquor throughout the state.

The bill allows retailers to use third-party groups via phone applications or internet service while removing liability for retailers if those services violate age verification laws.

In what came as a surprise to some members, the committee allowed testimony through videoconference — a first for the Illinois House. No one aside from lawmakers or staff is otherwise allowed on the BOS Center’s floor to testify.

The Illinois Craft Brewers Guild testified to ask for an amendment to allow for small brewers and distillers to deliver their own products, which the bill does not allow, despite wineries having those abilities.

House Minority Leader Jim Durkin, R-Western Springs, speaks on the floor of the Bank of Springfield Center in Springfield on Friday, requesting increased access for reporters covering the session. A handful of reporters were allowed on the mezzanine level of the 7,700-seat convention center.