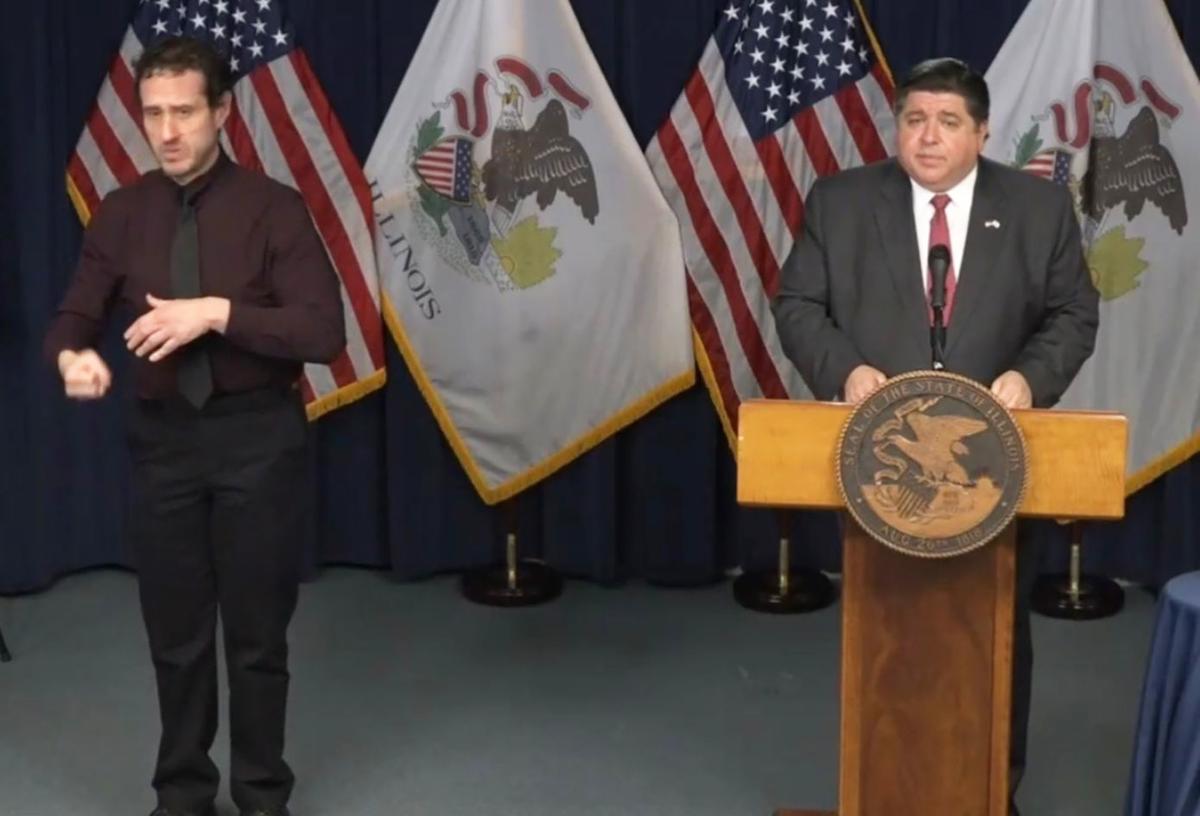 Illinois Gov. J.B. Pritzker discusses his dispute with the Trump administration over the availability of testing in Illinois during a coronavirus update news conference Monday in Chicago. 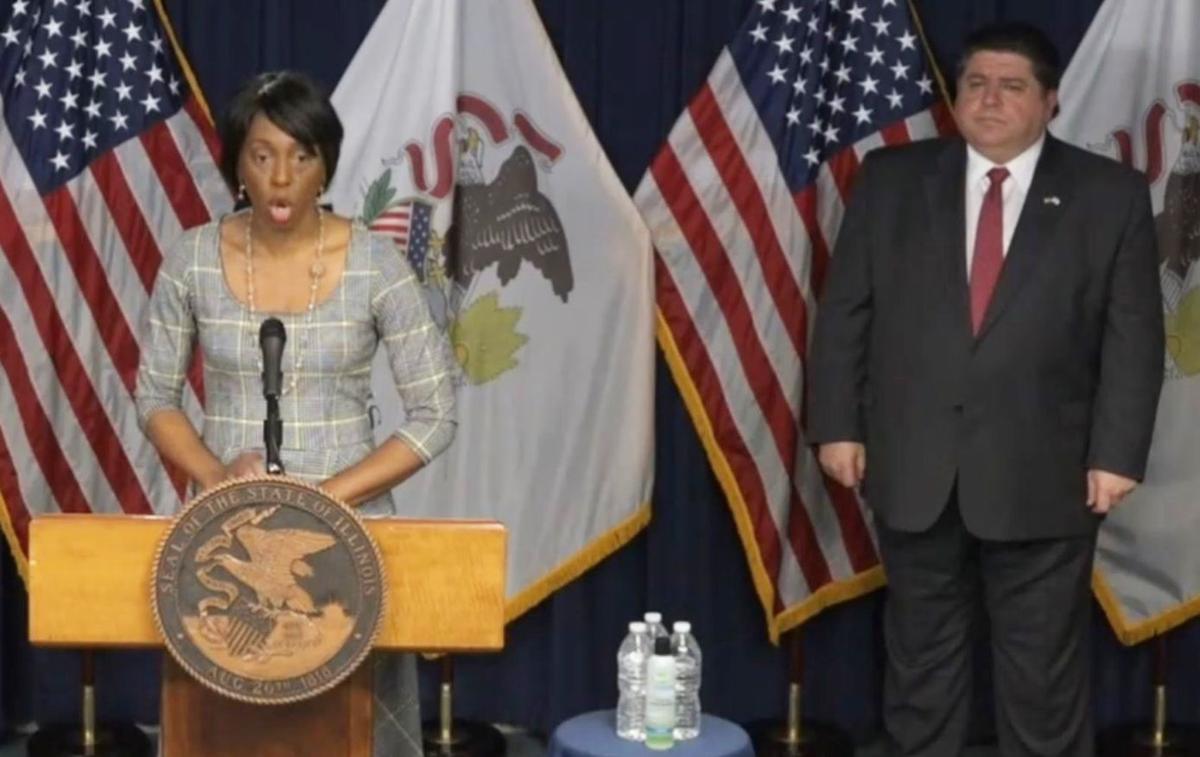 Dr. Ngozi Ezike, director of the Illinois Department of Public Health, discusses how the state is compiling counts of coronavirus cases and deaths in nursing home residents during a news conference Monday in Chicago.

SPRINGFIELD — Illinois Gov. J.B. Pritzker said Monday that the spread of the novel coronavirus disease, COVID-19, is showing signs of slowing down and that the social distancing measures put in place have saved thousands of lives.

“Our curve is bending the right way,” Pritzker said during his daily COVID-19 briefing in Chicago.

His comments came as the Illinois Department of Public Health reported 1,151 new cases of the disease and 59 virus-related deaths over the previous 24 hours. That brings the statewide total to 31,508 confirmed cases and 1,349 deaths since the pandemic first appeared in Illinois in late January.

As of Sunday, there were 4,599 people hospitalized for the disease in Illinois, accounting for 24% of all hospital beds in the state, according to IDPH.

“For context, early modeling in mid-March showed that without social distancing, we would have exceeded our hospital capacity by more than 25,000 beds by April 6,” he said.

Among those being hospitalized are 1,239 people in intensive care units, accounting for about 40% of all ICU beds, according to IDPH data.

“And to be clear, we are still seeing too many Illinoisans hospitalized with this virus, but because Illinoisans have come together by social distancing, learning at home and staying at home, we've so far prevented our worst-case scenarios,” Pritzker said. “As you can imagine when fewer people are contracting COVID-19, not only are there fewer hospitalizations, but also fewer ICU beds and fewer ventilators needed.”

Pritzker also noted that there are 757 COVID-19 patients on ventilators, accounting for 23% of the state’s ventilator stockpile. Without social distancing and other forms of mitigation, he said, the state would need “thousands” more ventilators than it has.

Pritzker also said the state is ramping up COVID-19 testing for both residents and staff at nursing homes, veterans homes and other long-term care facilities, including those where no cases of the disease have yet been reported.

IDPH also is now making public detailed information about long-term care facilities where outbreaks of the disease have been reported.

Pritzker said the state is prioritizing testing at long-term care facilities because they house populations among whom an outbreak is more likely to result in serious complications, or even death.

He said the Illinois National Guard and the Department of Transportation began delivering testing supplies to facilities without any known cases over the weekend and that those efforts will continue until all such facilities have been supplied.

When a COVID-19 case is reported at a long-term care facility, Pritzker said, the state operates under the assumption that any resident displaying symptoms of the disease has the disease, regardless of whether they’ve been tested, and it recommends those residents be isolated and given appropriate care.

Pritzker said the state is also ramping up testing of staff at facilities where an outbreak has been reported. Until recently, he said, the state was urging facilities to give those staff members a wellness check, including taking their temperature, before starting their shift. Now, he said, the state is requiring that all staff at those facilities be tested, even if they’re not showing symptoms, in order to identify workers who should be at home in isolation.

Pritzker said that so far, long-term care facilities in Illinois have complied with IDPH guidance and he praised the staff at those facilities as “front-line workers” who dedicate their lives to caring for the state’s seniors.

“That said, we will not hesitate to hold any bad actors at the management level accountable,” he said. “These private facilities are home to some of our most vulnerable Illinoisans, and we expect owners and managers responsible for their care to take every action at their disposal to keep them safe.”

Status of the stay-home order

The executive order directing people to stay at home as much as possible is set to expire April 30, but Pritzker gave no indication Monday that he is preparing to lift it.

Pritzker said he accepts guidelines from the White House that say there must be a steady decline in the number of cases over at least a 14-day period, but he said there also needs to be much more testing in order to know for sure that the numbers are coming down.

“What would make you feel comfortable going back into your place of work?” he asked in response to one reporter’s question. “What would you need to feel comfortable as you go to work every day knowing that everybody in your workplace goes home, and they go to the grocery store and they go to, you know, wherever it is, they go visit their grandmother and so on, and then they come back to work the next day?”

“We need a lot more testing across the country before I think everybody's going to feel comfortable, including the business owners and managers and people who work there not to mention the customer,” he added.

Gov. J.B. Pritzker said Tuesday the state’s COVID-19 peak could come in mid-May and he is examining the current stay-at-home order for potential changes.

Pritzker: Changes to stay-at-home order coming, but ‘normal’ a long way away

SPRINGFIELD — Changes are coming to the stay-at-home order, Gov. J.B. Pritzker said again at his daily COVID-19 briefing Tuesday in Chicago, b…

Illinois ballot eligibility requirements will be loosened for third-party candidates affected this election cycle by state efforts to combat the novel coronavirus pandemic.

Illinois Gov. J.B. Pritzker discusses his dispute with the Trump administration over the availability of testing in Illinois during a coronavirus update news conference Monday in Chicago.

Dr. Ngozi Ezike, director of the Illinois Department of Public Health, discusses how the state is compiling counts of coronavirus cases and deaths in nursing home residents during a news conference Monday in Chicago.