That’s an increase from the four broad regions in the Restore Illinois reopening plan in place before Wednesday’s announcements.

The new regions largely follow the state’s emergency medical regions, including five split between Chicago and its suburbs, one in the St. Louis Metro East area, one Southern Illinois region, a Northern Illinois non-Chicago or suburban region, and East-Central, West-Central and North-Central regions. 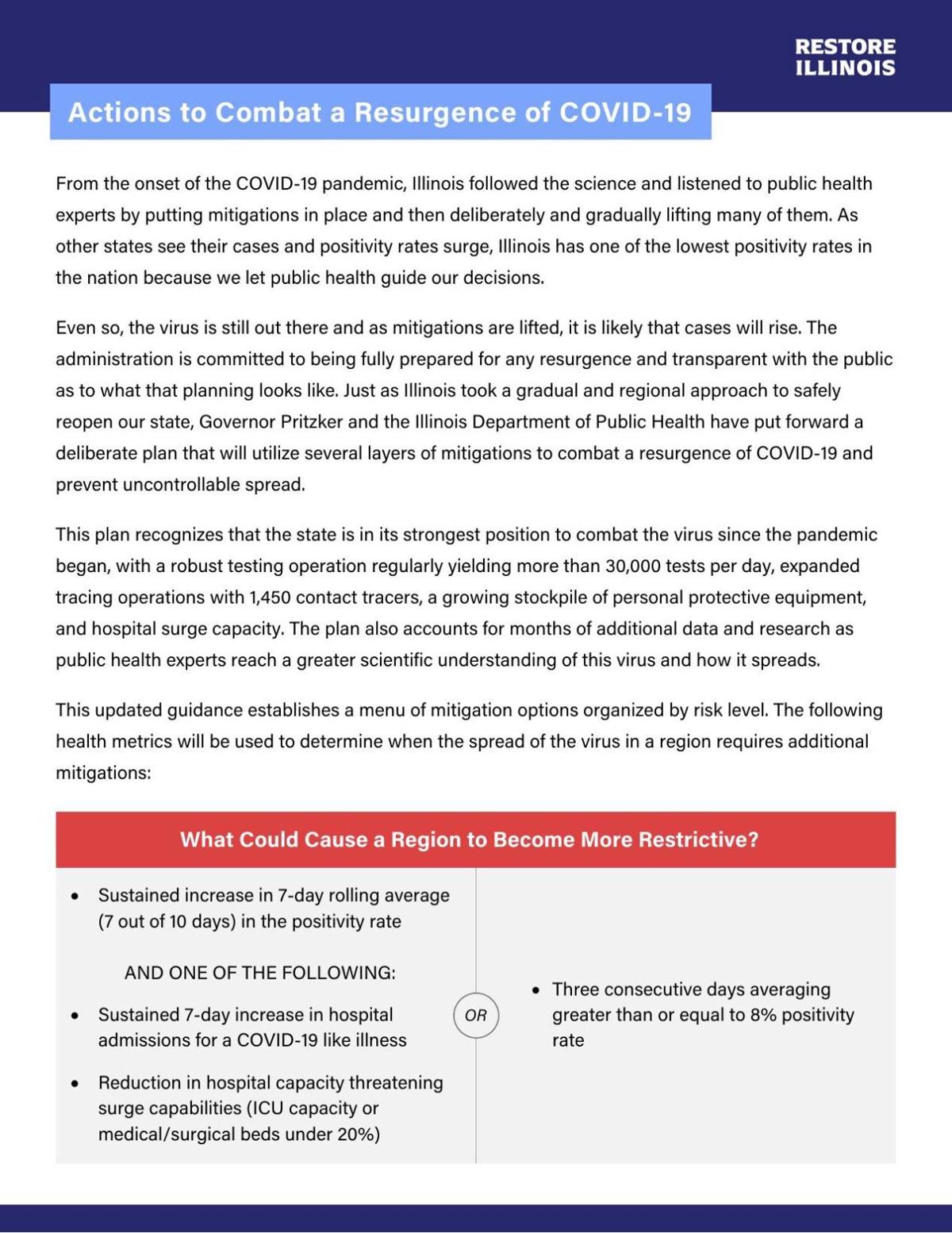 Pritzker, at a COVID-19-specific news conference in Chicago, also laid out the metrics that, if hit by any of the regions, would cause the state to implement new restrictions to mitigate spread. No regions were currently hitting any of the metrics as of Wednesday.

Those metrics include a combination of: an increase in the seven-day rolling average for test positivity rate for seven out of 10 days; a sustained seven-day increase in hospital admissions for a COVID-19-like illness; or a reduction in hospital capacity of intensive care unit beds to under 20% available.

Pritzker said there would be a “menu of options” to contain the virus, including many of those in place during previous phases of the reopening plan. Bars were of particular concern, he said, along with youth sports camps that have proven to be hotbeds for the virus.

A “failsafe” requiring immediate action, as Pritzker described it, would occur if a region has three consecutive days averaging greater than an 8% positivity rate on tests conducted.

The Illinois Department of Public Health announced three tiers of mitigation strategies that could be employed if a region reaches those metrics.

Additional meeting size restrictions would also be considered, along with remote work guidance or requirements for offices, and a reversion to other reduced in-person retail and businesses and services that were in place in previous phases of the reopening plan.

On the reopening of schools, Pritzker said all districts and buildings are different, so “one size doesn't fit all.” There’s room for adaptation of the Illinois State Board of Education guidelines, as long as face covering, social distancing and classroom size guidelines are met.

“In every decision relating to this viral threat, schools must focus on giving our children the best education possible, while offering the greatest consideration to their health and the health of their families, and all of those who work in our schools,” he said. “And as indicated by the ISBE instructions, hybrid schedules and remote learning are likely to be a part of that solution.”

Pritzker’s news conference came as the state’s overall positivity rate for tests conducted ticked up to 3.1% after four days at 3% that followed multiple weeks below that level. There were 1,187 new confirmed cases reported out of 38,161 tests completed over the previous 24 hours, resulting in a one-day positivity rate of 3.1%.

The eight COVID-19-related deaths reported Wednesday drove the statewide total to 7,226 among 156,693 confirmed cases since the pandemic reached Illinois.

The IDPH website still contained information based on only the original four regions of the reopening plan Wednesday afternoon, and the Southern region had the highest positivity rate at 5%, followed by the Northeast and North-Central region at 4% each, and the Central region at 2%.

Dr. Ngozi Ezike, director of IDPH, and Pritzker both said the best virus mitigation tactic is wearing a face covering in public, keeping distance from others and hand washing. Ezike added young people are now a major driver of the virus’ spread.

“Ages 10 to 19 and ages 20 to 29 — they are having higher case rates now than ever before in this pandemic,” she said. “We are following this very closely, but young people and parents of young people, please be aware. This virus is now being spread by youth, by younger people. So young people, we need you to make responsible decisions to help us continue to keep our successes and decrease and minimize spread.”

Ezike said those exposed to a person testing positive for the virus must “undergo a 14-day timeout” of self-quarantine. It’s best to wait six to seven days after exposure to get tested, she said, otherwise a false negative may occur. Even a negative test does not release a person from the 14-day quarantine requirement, she said.

“I know that's hard to take — you're feeling fine. You got an initial test, it says you're negative. But that test is not enough to take you out of the 14-day timeout. We have many individuals that have not been positive on day six or seven,” she said, adding that positive test results have come as late as 14 days after exposure.

The state’s hospitalization metrics continued to hover around their pandemic lows at the end of Tuesday. There were 1,454 hospital beds in use by COVID-19 patients as of 11:59 p.m. Tuesday, up by 38 from the day before but within the range of the past two weeks. The 324 COVID-19 patients in intensive care unit beds and 130 on ventilators were also near pandemic lows.

Illinois saw 37,626 new unemployment claims for the week ending July 11, a decrease of more than 1,000 from the previous week as continued claims numbered 663,399. 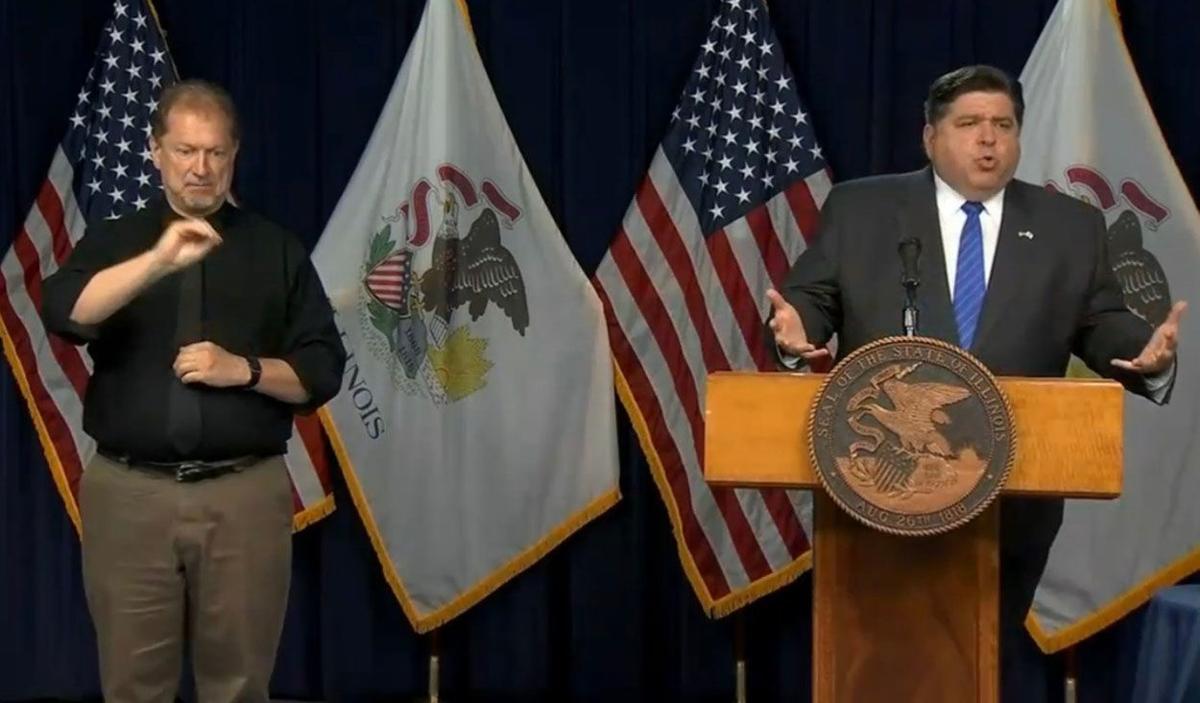 Gov. J.B. Pritzker answers questions from reporters during a news conference on July 15 in Chicago to update Illinois residents on the state's efforts to curb the COVID-19 pandemic. 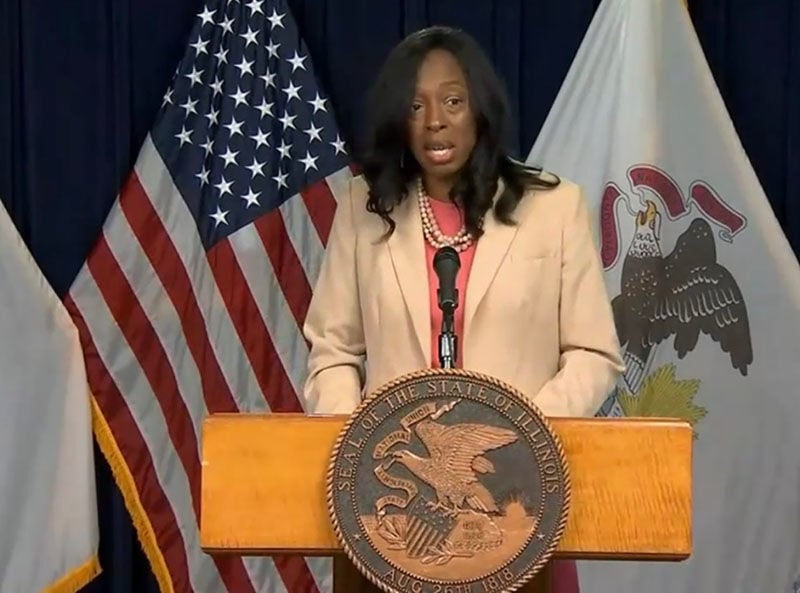 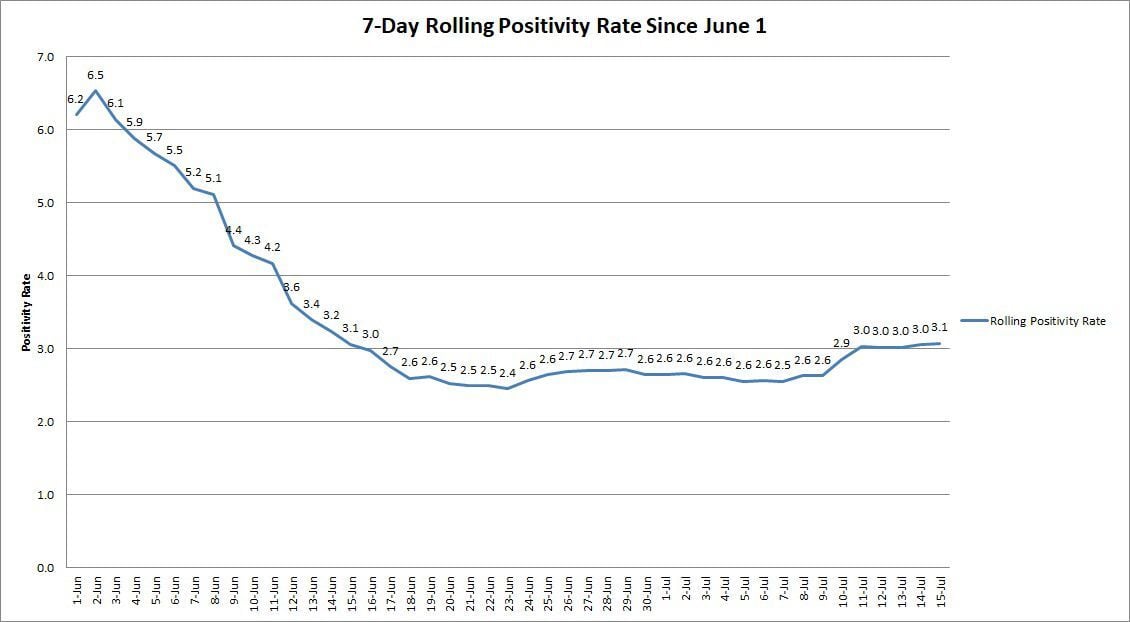