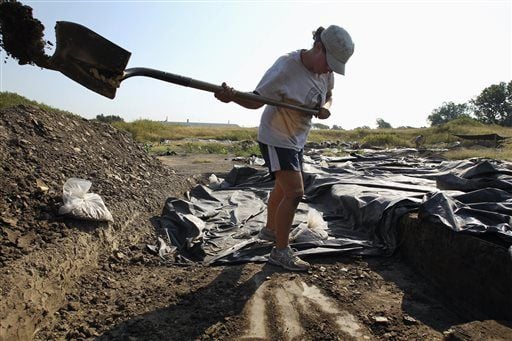 In this 2011 file photo, Melissa Frederick works at an archaeological site near East St. Louis. 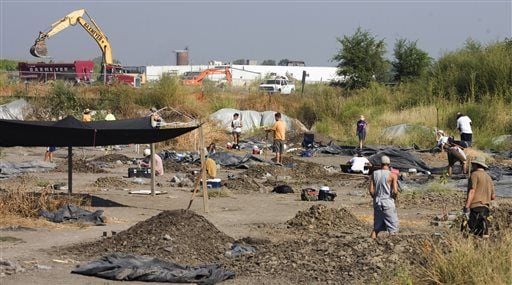 In this 2011 file photo, trackhoes and other excavation work related to a future bridge can be seen in the background at an archaeological dig site near East St. Louis. 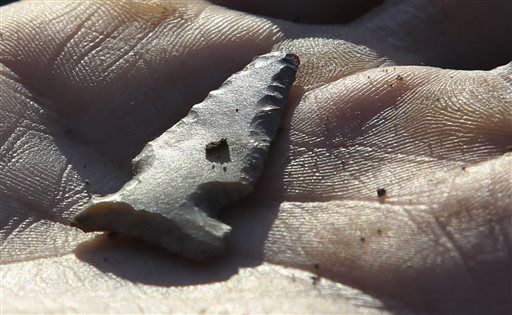 In this 2011 file photo, an arrow point found at an archaeological dig site near East St. Louis.

There's a lot archaeologists still don't know about the American Indian culture in our region.

But they're analyzing what they found during a dig to clear land for the Stan Musial Veterans Memorial Bridge — and they're ready to share.

For one, East St. Louis was a bustling city chock full of immigrants. Around 1000 A.D., it was bigger than nearby Cahokia Mounds site and it thrived for about 150 years.

"The occupation is heavy," says Tamira Brennan, the interim field station manager for the Illinois State Archaeological Survey in Fairview Heights. Although the scientists haven't yet done a population study for the area, they can say it was "densely populated."

"This is the first big city in North America," said Brad Koldehoff, the chief archaeologist for the state. "Now we have details, and it's - wow. Some conjecture had been that all Cahokia moved to East St. Louis, but that's not it.

"When Cahokia was big, East St. Louis was big; and this was even bigger than people thought."

The Illinois State Archaeological Survey team is analyzing what they found while digging under contract for the Illinois Department of Transportation. The area near the old stockyards was part of the study for the bridge, and fieldwork ended in 2012. They've been working since on cleaning up the finds and cataloging it all.

Many in the area were immigrants, the study is revealing. Brennan said the archaeological record at Cahokia led to the research on immigrants, but the East St. Louis site confirms the significance of immigration.

"They couldn't have reproduced fast enough to make that number of people," she said from her office in Fairview Heights, which has tables full of pottery and pottery fragments.

"Like New York City or Washington, D.C.," Koldehoff said, "that's what it looks like in East St. Louis. ... something was happening here that drew people from all over the Midwest and the South."

Koldehoff thinks it may have been a religious movement, "like this was the founding of a holy site.

"Pottery fragments tell archaeologists that the material came from Southern Missouri or Northern Arkansas, Oklahoma, Texas and Wisconsin. They can even tell if the clay used came from Madison or Monroe counties.

The scientists look at how many recovered pottery pots were made in the local style. Materials and style show that immigrants brought some of their own pots when they arrived, but as broken pottery was replaced they "got with the program" Koldehoff said, adopting the local style.

"There's definitely a population increase," said research archaeologist Alleen Betzenhauser. "Some of the 'ah-ha' moments come when processing the data," she said, which the archaeologists have been compiling since digging stopped at the old stockyards in October 2012.

"You can't tell when you're digging exactly ... you can't see these patterns," Brennan said. The Illinois State Archaeological Survey team is drafting reports now, having analyzed the features found and having tabulated the results.

Their extensive data system allows them to see patterns that indicate how and who lived in the area. Because of the number of people living there and the fragile nature of pottery, there is a continuous record for the scientists to study and analyze from the Terminal Late Woodland People all the way to the late Mississippian period.

"The bowls become smaller ... less like group eating from big communal bowls," Betzenhauser said. She says a typical family might have had five or six jars and a couple of bowls, although "not every household would have every type of pottery," she said.

Some of the pottery is finely crafted, as though someone with great time and skill made it, but others are more utilitarian. Betzenhauser said nearly everyone is likely to have known how to shape and craft pottery.

Arrow and other stone tools also point toward a large population in the East St. Louis, says Steve Boles, a research archaeologist with the Illinois State Archaeological Survey.

He and his team sifted through eight tons of rock that included everything from knuckle-sized arrows to limestone rocks used to line fire pits. They winnowed away the limestone to find about half a million items to analyze. "Most every other tool was made locally," he said, referring to hoes and other heavier gardening tools. "But arrows are probably coming in with people."

The stone and style suggests arrowheads coming from as far away as North Dakota, but more commonly from Arkansas, Louisiana, Mississippi and Wisconsin.

Boles says it's unlikely the arrows were planned for hunting given the population's size and the number of arrows found in the later time period. "They couldn't have found a rabbit to shoot after 100 years (of the heavy population) ... more arrowheads likely means warfare."

Questions remain as to why so many people left so suddenly. The East St. Louis site appears to be nearly abandoned by about 1200, having been occupied for about 150 years. There's no indication that the significant population in East St. Louis at the time was a rival to the Cahokia population, Betzenhauser said.

"They seem to be cohorts," but palisades were built in about 1150 around Cahokia. Brennan says a number of factors likely played into the populations' sudden decrease.

"There is evidence of severe drought" when the stockade was built, which coincides with the increase in arrow points as well. "When you have drought, you have war..." Brennan said, linking the dwindling resources to reasons people may have left the area.

In this 2011 file photo, Melissa Frederick works at an archaeological site near East St. Louis.

In this 2011 file photo, trackhoes and other excavation work related to a future bridge can be seen in the background at an archaeological dig site near East St. Louis.

In this 2011 file photo, an arrow point found at an archaeological dig site near East St. Louis.