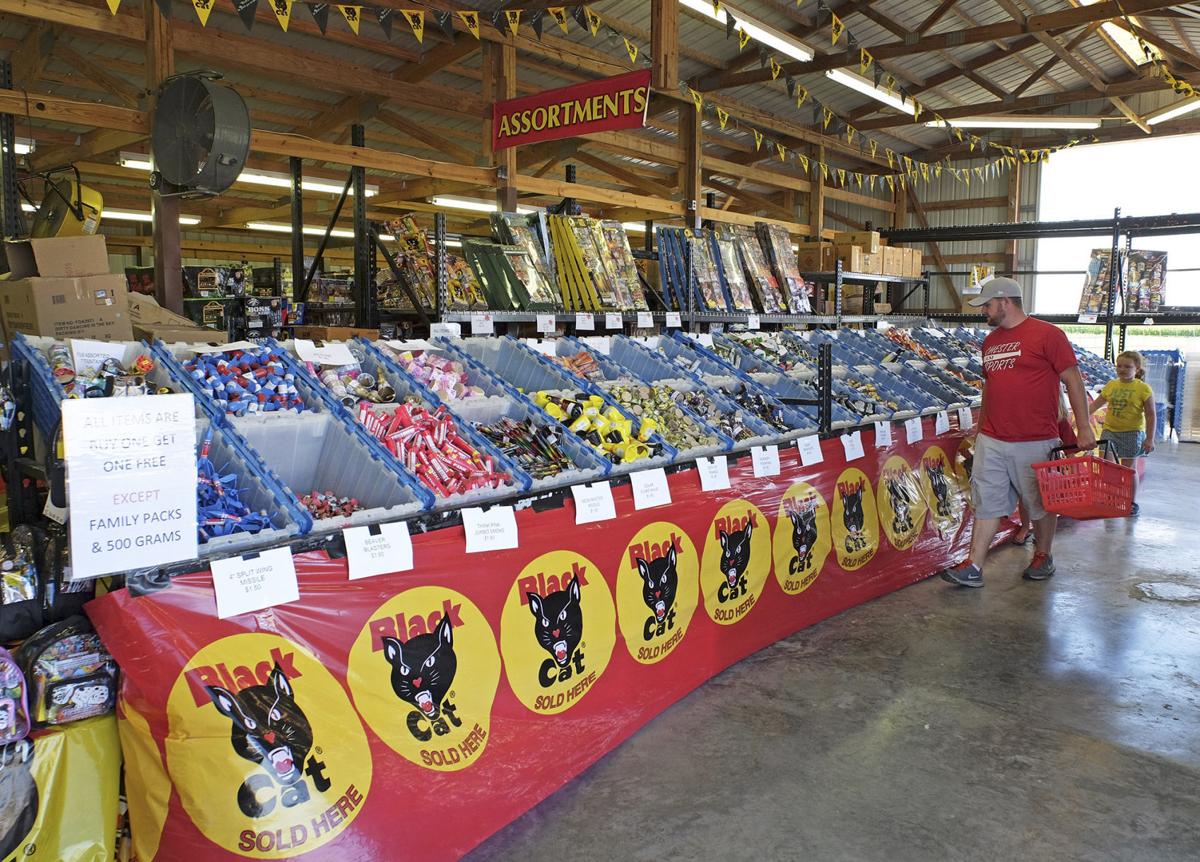 Shoppers look over the selection of fireworks at Red's Fireworks located in Missouri just across the Mississippi River from Chester. One employee estimated that 90-95 percent of their business comes from Illinois residents. 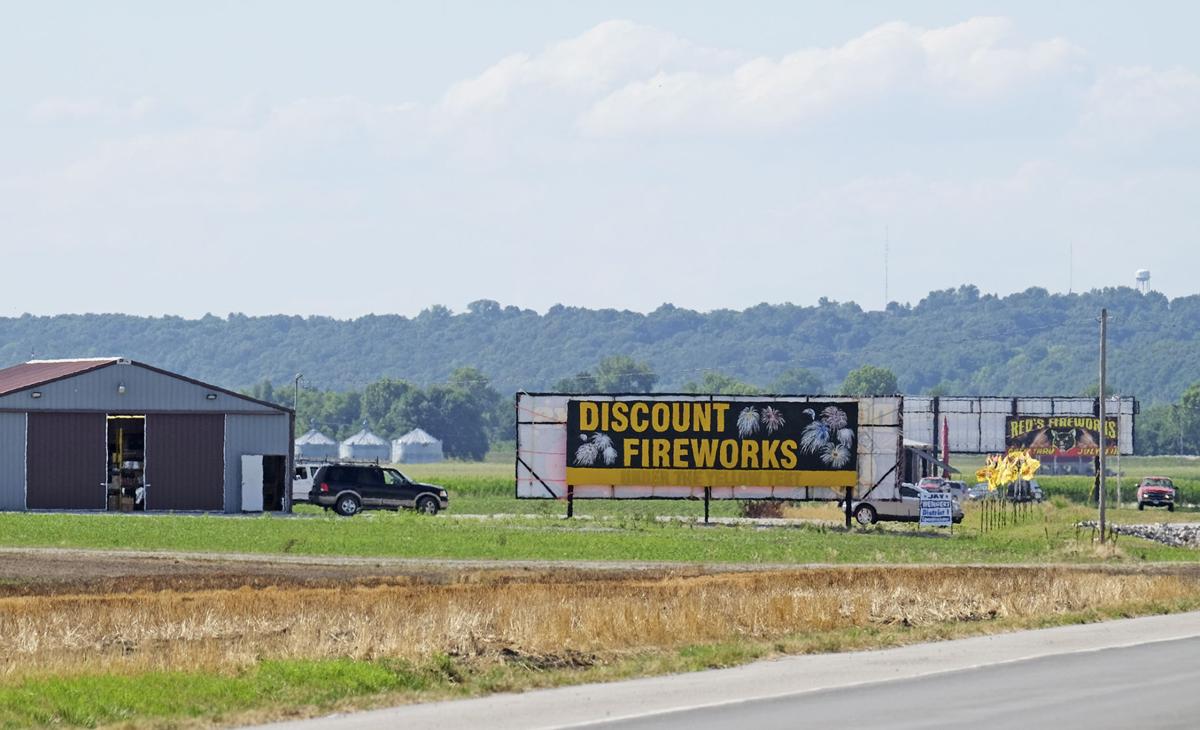 Four fireworks stands are located in Missouri just across the Mississippi River from Chester. 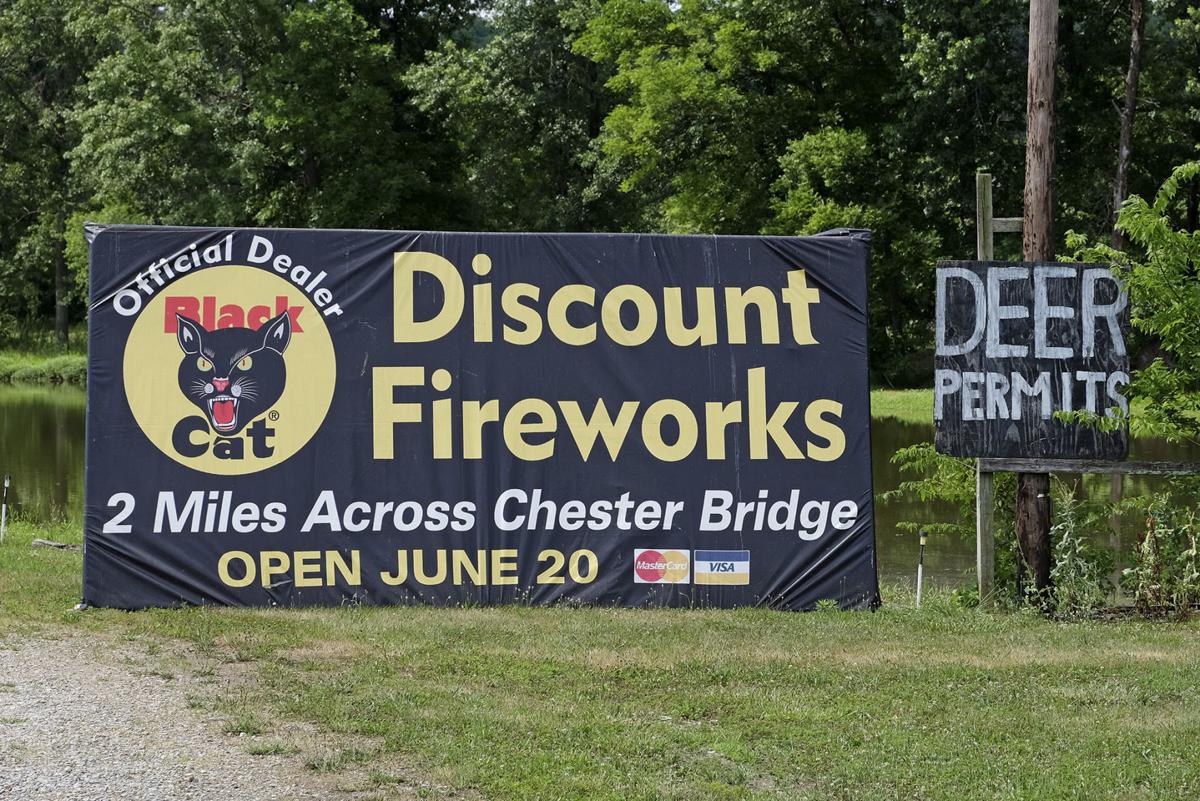 A temporary billboard along Route 149 near the intersection with Route 3 advertises for a fireworks stand in Missouri across the river from Chester. 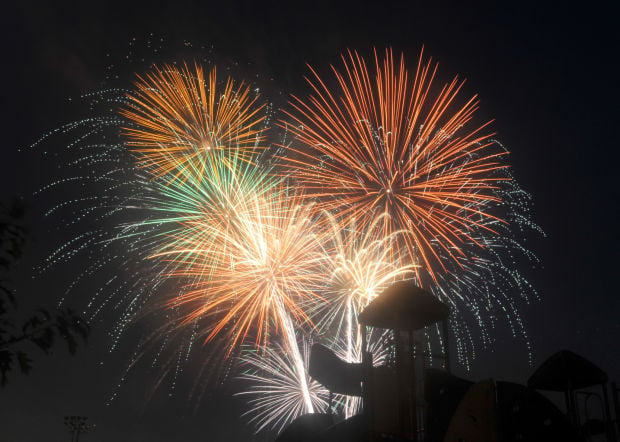 A playground is silhouetted as fireworks go off during the July 4 celebration at the Lewis Park Superblock Sports Complex in Carbondale.

Editor's Note: This is the fourth story in a series of Sunday stories devoted to the business of sin. The Southern published an overview story of the series in June's edition of The Southern Business Journal. The first story ran Sunday, June 12, and covered revenue generated by gambling. The second story was June 19 and was on alcohol and tobacco taxes. The third was June 26 and was about taxes on adult entertainment.

In 2015 alone, Georgia, Kentucky, Michigan, New Hampshire, New York, Utah, and West Virginia have all relaxed laws for sales and purchases of consumer fireworks to generate additional funds for state revenue. In neighboring states such as Indiana, Heckman said relaxed laws have been very beneficial.

"Lifted restrictions on the sale of most types of fireworks (are) driven by tax incentives — whether to make up for a hole in the state’s’ budget, or a way (to generate) additional tax revenues," Heckman said.

Although Illinois misses out on reaping economic benefits of a relaxed consumer fireworks law, individuals within the state still suffer a significant amount of injuries from fireworks banned in the state.

According to an annual report generated by the Consumer Product Safety Commission, an estimate of 11,900 injuries occurred in 2015 as a result of consumer fireworks.

This is an increase to the estimated 10,500 fireworks-related injuries in 2014.

In 2015, the state of Illinois reported 149 individuals with fireworks-related injuries.

Of the 149, the Division of Fire Prevention reported 32 injuries due to mortars, 21 injuries as a result of sky bottles, or air rockets, and five as a result of smoke and cherry bombs — all of which are banned in the state.

Of these cases, 89 percent of injured individuals provided a home address in Indiana, 4.4 percent reported out-of-state addresses and 6.1 percent did not report an address.

Marion, Lake and St. Joseph counties reported the most cases of firework-related injuries, with 29, 10 and eight cases, respectively.

Under the Pyrotechnic Use Act the state of Illinois permits the use of sparklers, but bans sales and possession of all consumer fireworks — which include firecrackers, bottle rockets and roman candles.

Individuals found in violation of the act not only receive a fine of $2,500 from the state, but may also serve up to one year in prison.

Eliminating penalties and the amount of injuries that individuals suffer as a result of recklessly handling fireworks, Heckman said the American Pyrotechnics Association expects to see more remaining states pick up on Indiana's taxation on consumer fireworks.

"In 2011 Indiana took in $2.5 million from the special 5 percent public safety tax -- they were the first one to (implement the special tax) and I think that’s why other states started looking at it," she said.

The Business of Sin

Nefeteria Brewster is a reporter covering Marion and Williamson County.

Shoppers look over the selection of fireworks at Red's Fireworks located in Missouri just across the Mississippi River from Chester. One employee estimated that 90-95 percent of their business comes from Illinois residents.

Four fireworks stands are located in Missouri just across the Mississippi River from Chester.

A temporary billboard along Route 149 near the intersection with Route 3 advertises for a fireworks stand in Missouri across the river from Chester.

A playground is silhouetted as fireworks go off during the July 4 celebration at the Lewis Park Superblock Sports Complex in Carbondale.