Ange Dixon doesn’t know what she saw, but she knows she’s not crazy.

“I can’t tell you what exactly what it was,” she said, recalling a time nearly 20 years ago she, her daughter and now-ex-husband were driving near Makanda in the small hours of one February morning.

It was around 2 a.m. Snow was falling. Dixon said she was driving with her then-10-year-old daughter to pick up her husband from his brother’s house. On the way back, she was driving near Makanda when she saw what she thought were mailbox reflectors. She got closer, and thought it was a mountain lion. At about 25 feet away, she realized she was wrong, again.

“I realized that it wasn’t a cougar, that it was actually crouched down in the middle of the road holding something,” Dixon remembered. “We just sat there and was watching it and it just stood up and it was huge.”

Dixon described it as completely black with defined muscles.

“All I could focus on was his eyes,” she said. “red, yellow glowing eyes.”

Then, Dixon said, it took off and was gone. Dixon’s daughter was among the first to speak up.

“She was like, ‘Was that a Bigfoot, mom?’” Dixon recalled.

“I get laughed at all the time,” Dixon said.

“It’s like, I’m not fibbing. I’m not lying. I’m not saying what it is because I don’t know what it was, I have no clue. But that’s what I seen,” she said.

She’s not alone. Far from it. Monster sightings are woven into the fabric of Southern Illinois. The Tuttle Bottoms Monster in Saline County, the Big Muddy Monster in Jackson County, big black cats, giant snakes and little red men are all familiar folktales. For some, they are more than folklore.

“We are knee-deep in it,” Zach Starrick said. He is the chief member of the Southern Illinois Monster Hunter group. He investigates reports of unexplained sightings, in Southern Illinois and throughout the U.S.

Starrick, a Williamson County native, said he feels like Illinois is a particularly special place when it comes to cryptozoology, which is the study of mysterious beasts and entities from folklore.

“Illinois is a creepy place and it’s also a very haunted place,” he recalled. In fact, he said in 2017, Illinois ranked second out of all 50 states for Bigfoot sightings.

Creatures of our own

Southern Illinois in particular has its own vivid collection of folktales and mysterious creatures, the most famous likely being the Big Muddy Monster — the region’s version of Bigfoot.

Sightings of the monster peaked in the 1970s and 1980s, even garnering attention from the New York Times. Carbondale attorney Christian Baril’s anecdote of seeing the beast made it into that report.

Baril recalled recently that incident from 1973. He said he was 3 years old, playing in a sandbox with his neighbor. It was getting toward dusk in his Westwood Hills neighborhood. After his buddy went home, Baril said he stayed outside.

“As I was out there I saw something. I don’t really remember the actual seeing of it,” Baril said.

He said he turned around and looked up at his house. The lights were all on as night set in, and the windows glowed. Baril said he had one thought.

While the monster itself isn’t clear in his head, some parts of the memory are.

“To this day I have a really clear picture of being really afraid and turning around and looking at that house,” Baril said.

When he went inside to tell his parents what he had seen, they weren’t too concerned. His dad, still dressed from work, was on the kitchen floor replacing a hinge on the refrigerator.

“OK, that’s fine. It’s time to go to bed,” is what Baril remembers being told when he announced his encounter.

It wasn’t until later that evening that his parents took it a bit more seriously. He said a neighbor called his mother to say that one of her children had seen something in the neighborhood. The neighbor who called, Baril said, was a very conservative woman and not prone to exaggeration. Baril’s mother told the neighbor to call the police.

“The police came out and they brought tracking dogs,” Baril said — though he admitted he was in bed at the time. The neighborhood was out “listening to something crashing through the bushes back there.”

“And it gets away,” Baril said.

Looking back, Baril knows he felt fear and believes something had to be out there. But the certainty stops there.

The monster cropped up again about 15 years later in Murphysboro, according to stories published in The Southern at the time. Bob Reiman told reporters that he encountered the beast, which he said smelled terrible, at his salvage yard in 1988. Reiman described it as 10 feet tall, with red eyes and yellow teeth. His mother told The Southern it smelled like "a skunk that fell in a sewer."

At the time, he provided sketches to the newspaper.

When investigating these types of claims, embracing certainty of the uncertain is part of it.

“I try to give people the benefit of the doubt,” Starrick said.

Virgil Smith has spent a considerable amount of time — and money — looking into strange sightings and weird happenings for people in Southern Illinois. He’s been at it for more than two decades, and estimates he’s spent about a quarter of a million dollars. He said there is one rule when talking with witnesses.

“Don’t ever discredit anyone when you talk to them for any reason. Because the first time you do it, your research is over,” Smith said. There is intense stigma attached to these sightings and stories for the witnesses, he said, and someone willing to come forward with an experience should be listened to.

Loren Coleman, one of the country's most noted and respected cryptozoologists, approaches everything with a scientific mind. In fact, Coleman studied science at Southern Illinois University Carbondale.

"I had a very scientific and critical thinking approach and would not come out with crazy theories,” Coleman said. He has never ventured so far as to surmise that Bigfoot had been dropped to earth by a UFO, he said.

Smith said he is of a similar mind.

“I’ve gotta be able to pinch it, smell it, feel it,” he said, noting that he tries to steer away from the paranormal and stays with things that could be rooted in science.

Take for example his work investigating Saline County’s Tuttle Bottoms Monster. Sightings of the hairy, long-snouted creature began in the 1960s. Smith said he was asked to look into the matter about eight to 10 years ago. What he found was not a creature out of mythology, but was, he believes, to be a known animal seen out of context.

Smith said in his research he discovered that a zoo in Mount Vernon had been forced to shut down around the time of the sightings of the Tuttle Bottoms Monster.

“The guy that owned the zoo did not maintain his animals,” Smith said. Through his investigation, Smith said, he learned that the man had been visited by federal investigators, who gave him 48 hours to find new homes for the animals or they would come and take them.

“His family and friends said he took them down through, scattered them throughout Southern Illinois, and released them,” he said. One of the animals he released was a giant anteater from Africa, Smith said. The description of the anteater lined up quite well with the description witnesses provided of the Tuttle Bottoms Monster.

Smith said the other animals the zoo owner allegedly released match descriptions of other beasts reported in the southeastern part of the state around the same time, including a hairy primate seen in Massac County. He said an old orangutan was among the animals he set loose, which likely explained this sighting.

Not everything lines up that neatly, though. Coleman said there is always room for the unknown in this type of research, but he said he tends to try to offer concrete explanations when he can.

“If I know it’s something that’s explainable and I’m not going to hurt somebody’s feelings, I think it helps the science,” he said.

Coleman said the science of cryptozoology is something he finds particularly satisfying.

“I think a lot of new science comes from there,” he said, pointing to what he called the “classic animals of discovery.” The giant squid is an example of this, he said. Until about 2006, the creature existed only in sailors' tales.

But, there’s a conundrum here, too. Coleman admitted that cryptozoology is always left holding on to a list of unknown, potentially unbelievable hypotheses. The giant squid rested firmly in cryptozoology until it was confirmed and taken away from that field, and brought into conventional science. That might fuel some of the intense skepticism crypto-researchers experience, Coleman said.

The search for the new can be all-consuming for some. But this is something Starrick said needs to be tempered. Not finding Bigfoot shouldn’t always be seen as a failure. He said finding a new waterfall or other geographic landmark shouldn’t be discounted.

He said part of the search should be about being out in the wild and letting what happens, happen.

“Don’t go in the woods looking for Bigfoot. Bigfoot will find you,” he said.

Science aside, Coleman, Starrick and Smith all agreed that these stories can build part of the fabric of a culture, from Southern Illinois to the mountains of Nepal.

“It is remarkable to me how these stories can kind of take hold and decades later become extremely important,” Coleman said.

Thinking back on his time in Southern Illinois, Coleman said there is a lot that makes the region unique for his research.

“Little Egypt is a very distinctive biological space,” Coleman said. He also said the lower half of the state has a lot in common culturally with the south.

“Its Southern nature lends itself to believing and sharing the stories,” he said, adding that “there’s more sharing in the South.”

Smith said this is changing, though. With the internet, research has shifted. There are fewer and fewer mom-and-pop places to go and ask about local lore as the conversation shifts online.

Baril said he has seen a welcome shift in the way people view these monsters and their stories. Growing up, he said it was not cool to talk about seeing Bigfoot.

“People don’t want there to be something unexplained, and they ridicule you,” Baril said. However, now the Big Muddy Monster and other cryptids have been embraced as lovable mascots.

As for their veracity, Baril, who has his own very real experience with the unknown, asked what’s the harm in wondering, in having an open mind.

From the Newsroom: Sometimes we get to have a little fun

This past Sunday — the weekend before Halloween — our front page was dominated by something a little bit different. 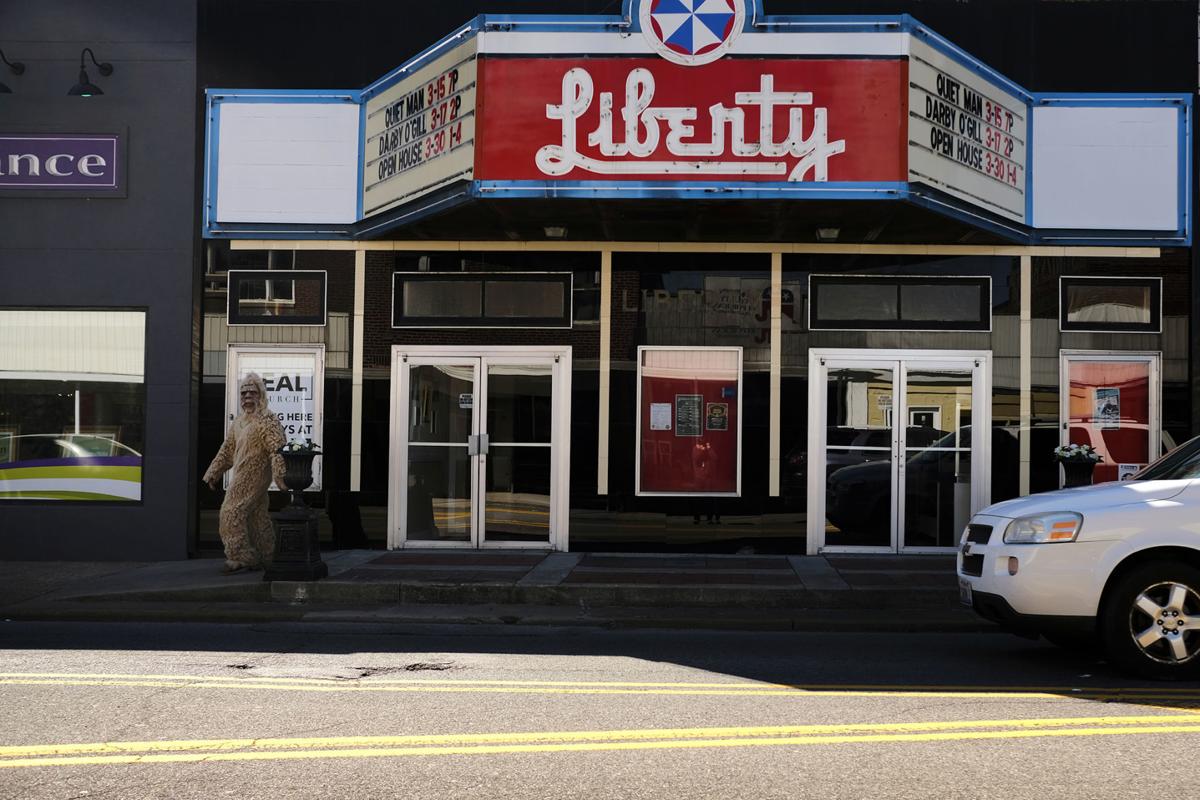 The Big Muddy Monster is seen during the 2019 St. Patrick's Day Parade in Murphysboro. 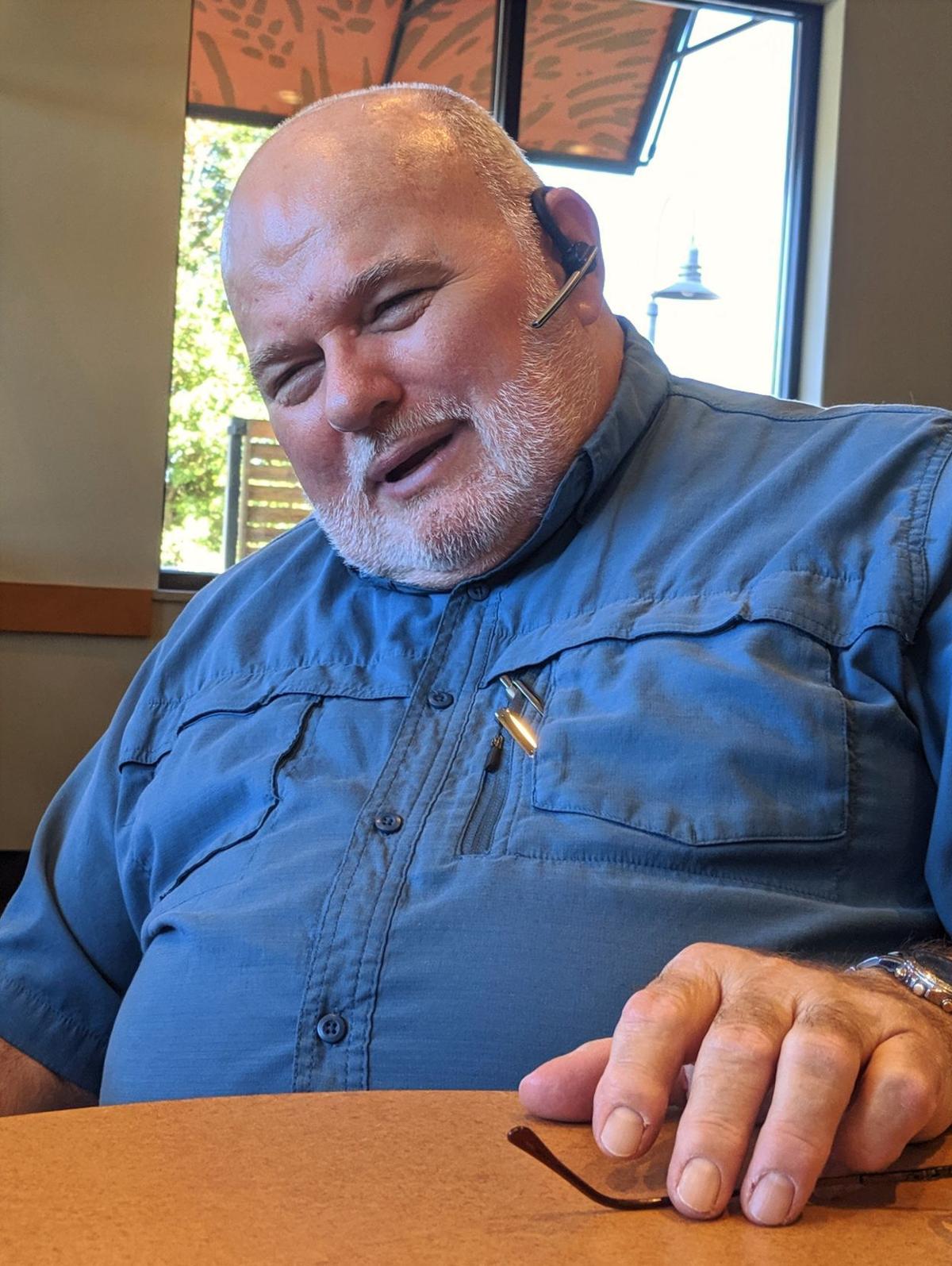 Virgil Smith is pictured during an interview Tuesday. Smith is an investigator of monsters and other strange sightings in the region. 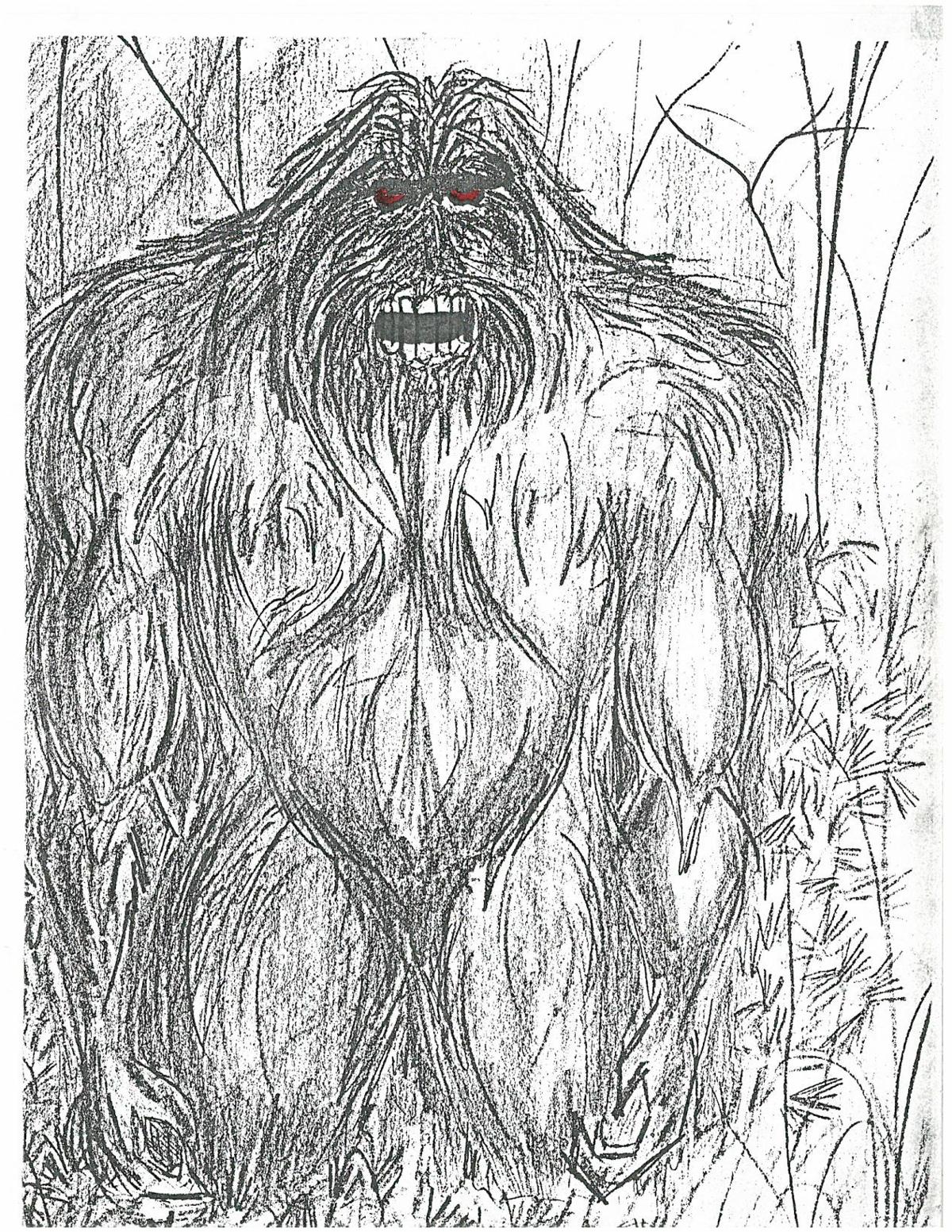 A drawing of the Big Muddy Monster from June 1988. 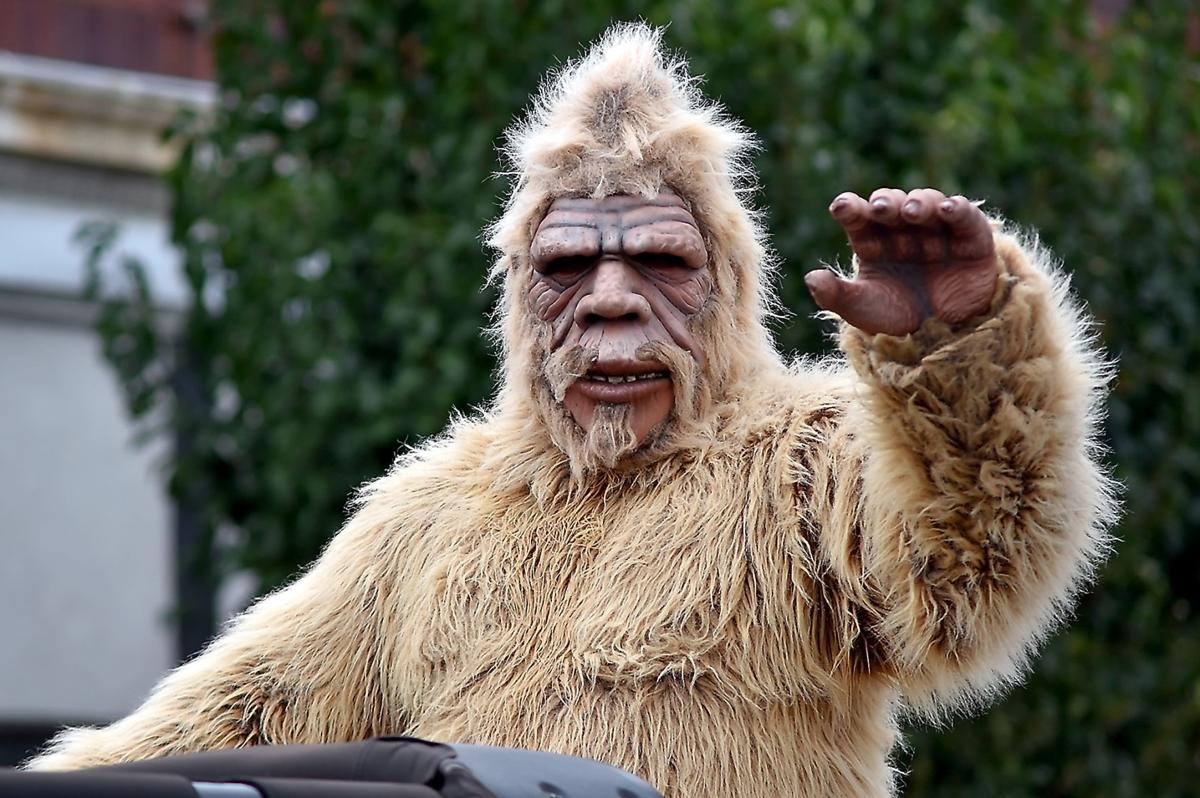 This story ran in The Southern Illinoisan in 1973. 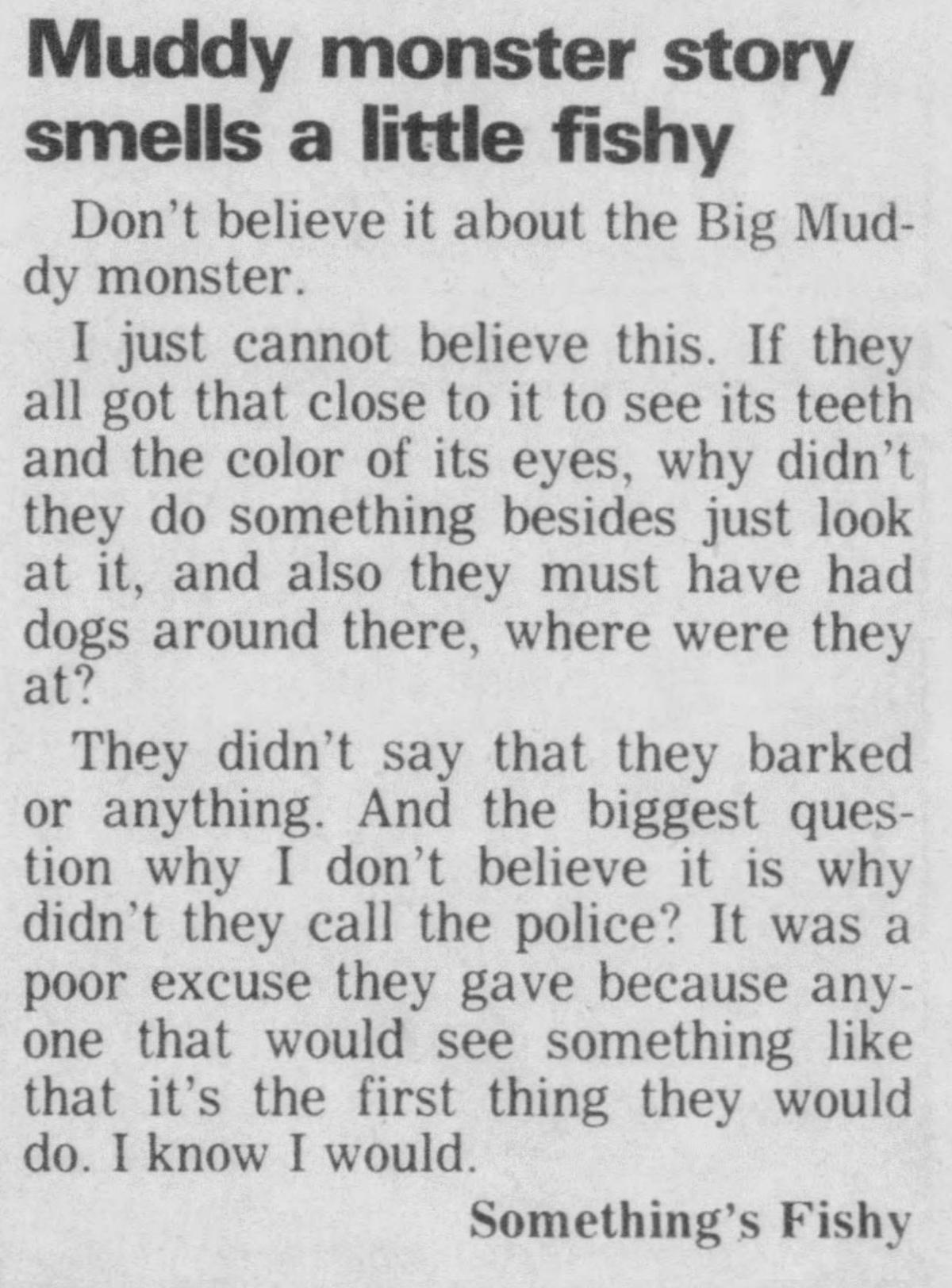 A letter to the editor published in The Southern in 1988 questions the existence of the Big Muddy Monster. 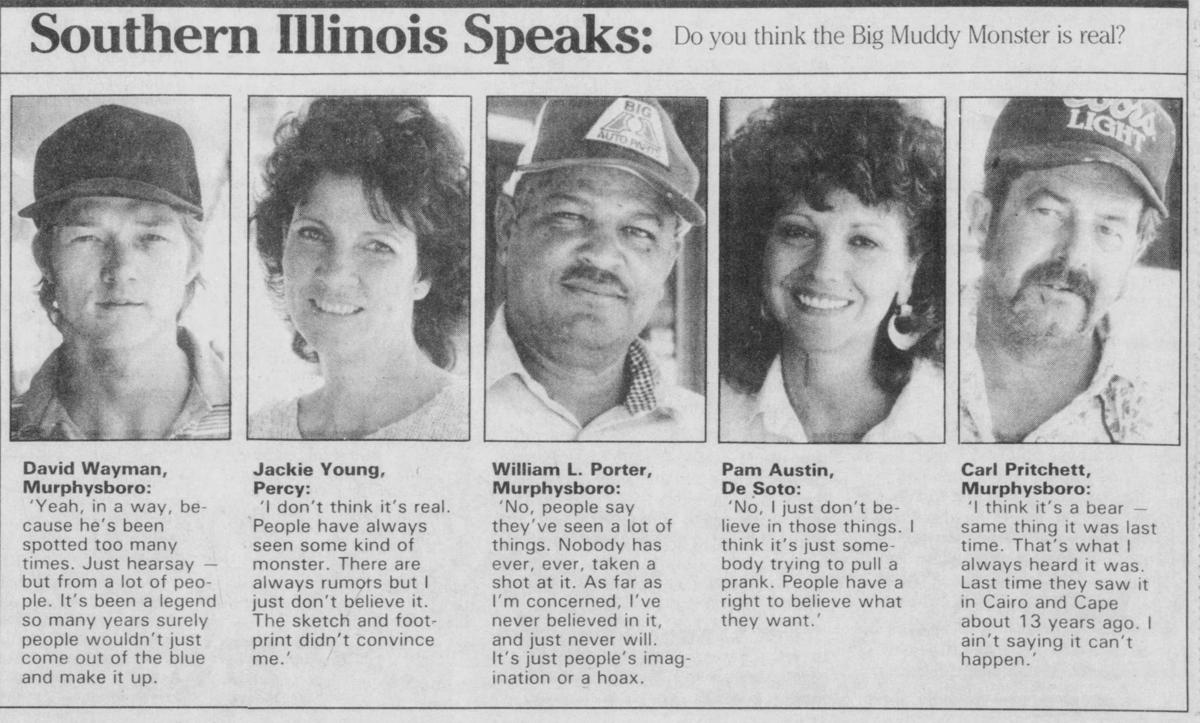 In 1988, The Southern asked readers what they thought about the Big Muddy Monster.

Bob Reiman provided this sketch to The Southern in 1988, showing what he claimed to have seen in his salvage yard in Murphysboro.