NORRIS CITY — In Southern Illinois, Norris City is a small dot on the map, 20 miles northeast of Harrisburg. But for about seven months during World War II, it was one of the most important places in the country.

And Ed Oliver is dying to let people know.

“They never did fire me,” he laughs.

For years he has gathered information about the project that put his hometown in the national spotlight: an interstate oil pipeline called “The Big Inch,” that was built at breakneck speed as the U.S. entered history’s deadliest war.

In the war’s early days, oil moved on ocean tankers.

But they became easy victims for German U-boats.

Prowling the Gulf of Mexico and the Atlantic coast, the submarines sank 233 American ships in the first half of 1942, according to the New England Historical Society, including dozens of petroleum tankers.

The oil so desperately needed to lay runways, make gasoline, TNT for bombs and synthetic rubber for tires was instead pouring into the ocean, causing pollution problems on Caribbean beaches.

So President Franklin D. Roosevelt turned to his secretary of the interior, Harold Ickes, who gathered the country’s largest oil companies to find a better way.

They got $35 million and thousands of tons of precious steel pipe to connect the Texas oil fields to the refineries, distributors and factories of the industrialized northeast.

Eventually, the pipeline would cross the country.

But Norris City was a perfect midway point in its construction.

The rural town had developed around a railroad junction: the crossing of the Cleveland, Cincinnati, Chicago and St. Louis Railway, also known as “the Big Four” and the Baltimore and Ohio Railroad, which ran east as far as New York City and Philadelphia.

At Norris City, oil could be offloaded onto freight trains to continue east, even as crews continued work on the pipeline’s second leg, from Southern Illinois to New York, New Jersey and Pennsylvania.

Beginning in August of 1942, eight crews of over 400 men each “worked around the clock,” to dig the trenches and lay and weld the 40-foot-long, nearly 4,500-pound pipes, according to Peoria-based author Ken Zurski.

The pipeline was dedicated in Norris City to great fanfare, on Feb. 19, 1943.

“NBC Radio came here. They broadcast live from Norris City on their network nationwide,” Oliver said. “Paramount studios came with a camera crew and it became a newsreel shown all over the country.”

About 2,000 people came too, more than doubling the town’s population.

He wasn’t at the dedication, but he can still remember the bustle around town in those days, and the housing shortage caused by so many workers flowing in.

He spent his youth around the Big Four train depot, where his father held local delivery contracts with the U.S. Mail, Railway Express and freight trains.

“The main thing I can remember is all the rationing,” he said. “Whenever my father needed new tires on the truck, he was considered an essential business, so they sent him a special ration of tires. I can remember seeing all the used tires piled up to recycle.”

Oliver has traveled across Southern Illinois tracking down stories about the Big Inch.

He’s combed through microfilms of old newspapers like the Carmi Democrat Tribune and the Norris City News at local libraries. He interviewed multiple pipeline workers before they passed away, and collected their photos of the old pumping plant and the massive 80,000-barrel oil storage tanks, and the guard tower that kept watch over it all.

He’s got photos of men who worked on the construction crews, and a long list of Norris City workers, from waterboys and laborers up to train depot and pipeline supervisors.

In college he even laid eyes on a Nazi map with Norris City identified as a priority for attack. To this day, he regrets being unable to make a copy.

“They ran this thing seven days a week, 24 hours a day,” Oliver said of the Norris City terminal, which sent an average of 24,000 oil tank cars per month. “You cannot overestimate how important it was. Yet people have no idea.”

In March of 2018, Oliver hatched a plan to remind people about his hometown’s history.

He contacted the Illinois State Historical Society, of which he’s been a member since 1966, to request a historical marker at the site of the Big Inch terminal.

Since 1934, the society has marked over 400 sites across the state. The program is aimed at places like Norris City: historically significant, but often overlooked.

Oliver took his plan to Bart Henson, the Norris City area supervisor for Enbridge, the company that now owns the Big Inch.

Henson, who has since retired, shared the idea with higher-ups at Enbridge’s corporate office and came back with good news: The company was happy to pay the $3,700 to build the 4-foot-tall cast aluminum marker.

“This all started with Ed,” Henson said. “He’s been the driver behind all of it.”

Henson and Oliver worked together to condense the pipeline’s history to 250 words and got the plaque back a few months later.

It came out beautifully, the men agree. But much to their frustration, the marker is still sitting in Enbridge’s Norris City office a year and a half later.

The company has asked Oliver and its Norris City employees to wait to install it until leaders from its Nashville and Houston corporate offices can find time to visit Norris City for the ceremony.

That still has not happened, despite repeated requests by Henson and his successor at Enbridge, Dan Russell.

“All the bigwigs want to be involved, but they can never get their schedules to align,” Henson said. “I guess they think they’re busier than anybody else.”

Originally Oliver and Henson planned for the dedication to coincide with Illinois’ bicentennial, last year. Oliver had reached out to the media and the community and even convinced U.S. Rep. John Shimkus to read a short description of the site and its history on the House floor, he said.

Now, all that is in limbo. Multiple inquiries to Enbridge corporate about when the marker might be inaugurated went unanswered.

“In my opinion, this company has made a big mistake,” Oliver said. “They’ve given me every excuse in the world. I just want to get this to where people can see it.”

Enbridge also paid for a marker in Longview, Texas, where the Big Inch began, Oliver said.

That town is just three hours from the company’s Houston offices, but a Longview official told Oliver it took about two years to get corporate leaders there to inaugurate the marker.

“I don’t know what to think,” Oliver said. “Or when this might finally happen.”

In August of 1943, the Big Inch’s eastward extension was completed. Norris City went from the country’s oil shipping hub to a pass-through station on the pipeline.

Today, most residents can’t spot the traces of their town’s moment in the national spotlight, Russell said.

The old railroad tracks have been swallowed by forest, and the depot and the oil loading racks are no more. The oil tanks held corn for some years, then got knocked down.

A row of identical white company houses built to accommodate the worker influx were later moved to a small subdivision near the high school. Today, one is painted blue, another expanded and remodeled with brick and vinyl siding.

The Big Inch pipeline moves natural gas now, overseen by about a dozen Enbridge employees who mow right of ways and maintain compressors and valves at a quiet warehouse east of downtown, on the same spot where the railcars were once loaded.

“Used to be you could buy anything you wanted to buy here in town,” Oliver said. “The shops stayed open until 9 or 10 at night, and they would be full of people come in from their farms to get supplies.”

Now, it’s mostly antique shops, Oliver said, plus the big church and the John Deere dealer along the highway.

These days, Oliver is thinking about what to do with a lifetime of collected history.

He’s got endless binders and boxes of documents and artifacts. Rare books snatched up from local library sales. Money issued by the State Bank of Illinois before the Civil War, back when it was located at Shawneetown. A commemorative cachet of the official stamp of the Illinois sesquicentennial. The only known existing copy of a never-published history of Cairo from 1836 to 1903.

“I would love to have some place where my collections could be permanently used for people to do research,” he said, even just a little building in town.

He helps local students with their history fair projects, and he’s got many historical articles to his name in the local papers. Someday, he hopes to write a book.

When asked about his passion for history, Oliver couldn’t help but answer with an old story. The air he breathes is dates, events and artifacts.

He grew up steeped in family history, hearing stories about relatives who fought in the Revolutionary War, including under Gen. George Washington. His great-great-great-grandfather was the first settler in the Norris City region.

“Some say, 'Old stuff. Why do you study history?'” he said. “The same reason we study the Bible. To avoid the mistakes those people made.”

He’s still planning for the commemoration of the marker, picking out the old photos he wants to blow up on a display, to show people how things used to look.

Voice of The Southern: Thumbs up to Massac County girls golf, thumbs down to teacher shortage

Thumbs up to a remarkable run by the Massac County Lady Patriots golf team. The Lady Patriots failed to qualify for the state tournament this … 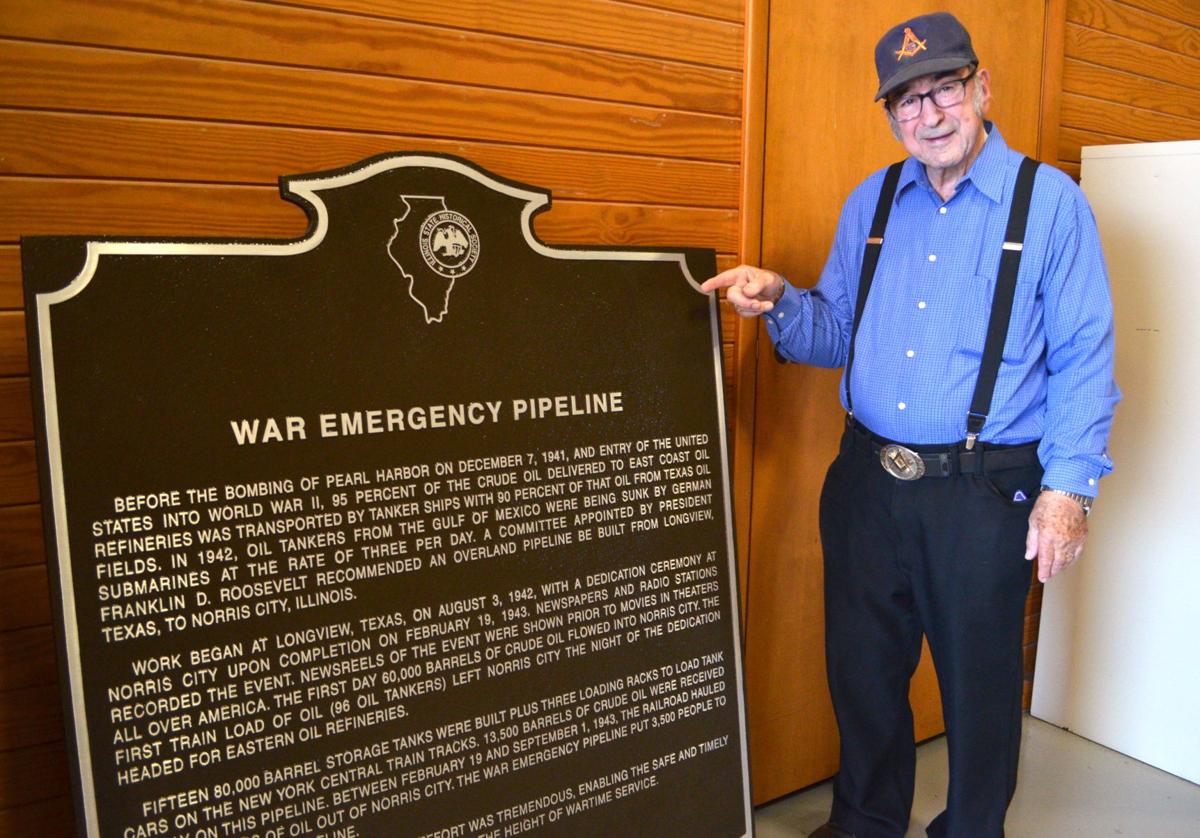 Ed Oliver, of Norris City, stands alongside a state historical marker commemorating the Big Inch oil pipeline that was built between Texas and Norris City during World War II. Oliver led the local effort to build the marker. 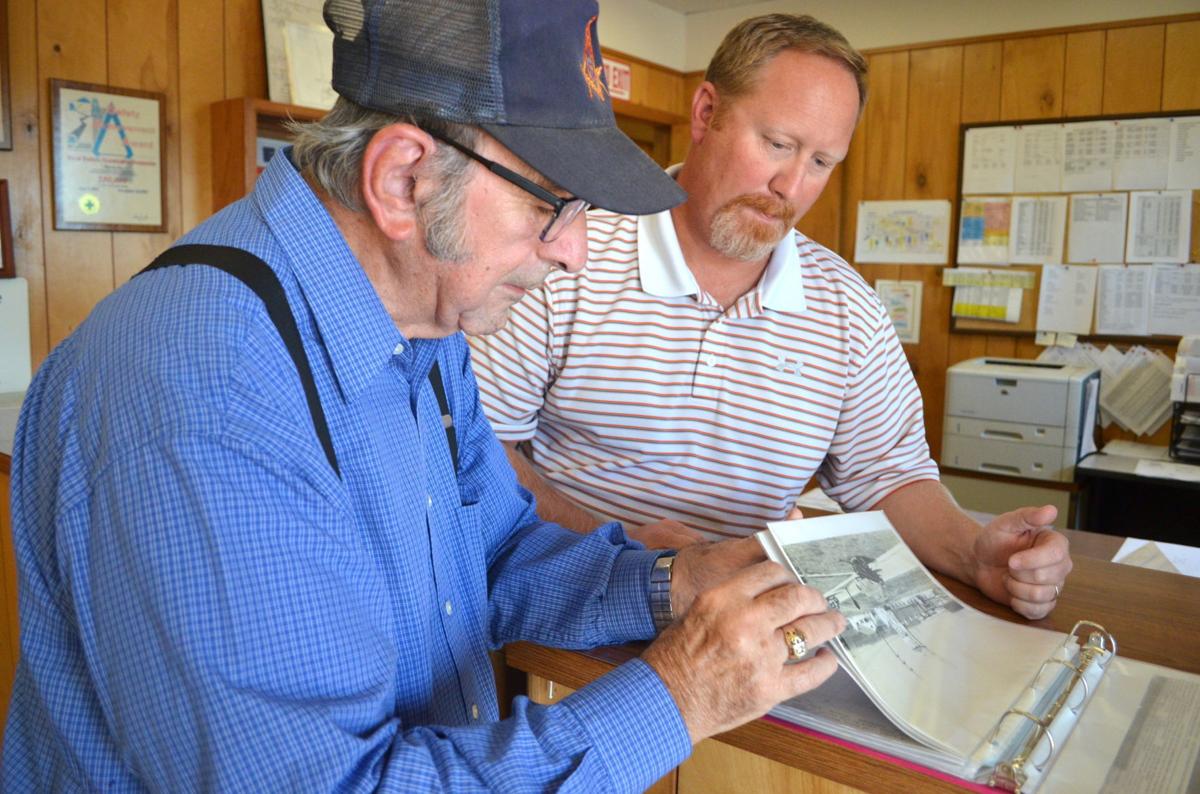 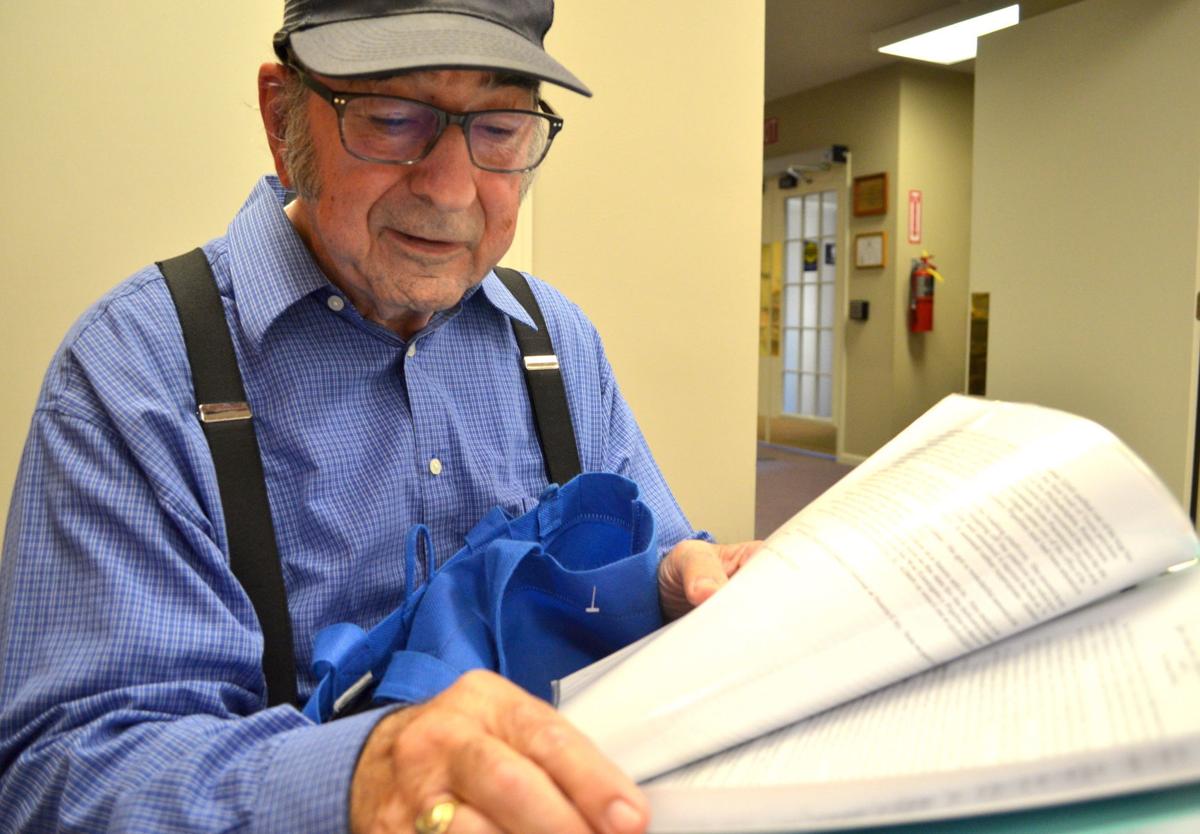 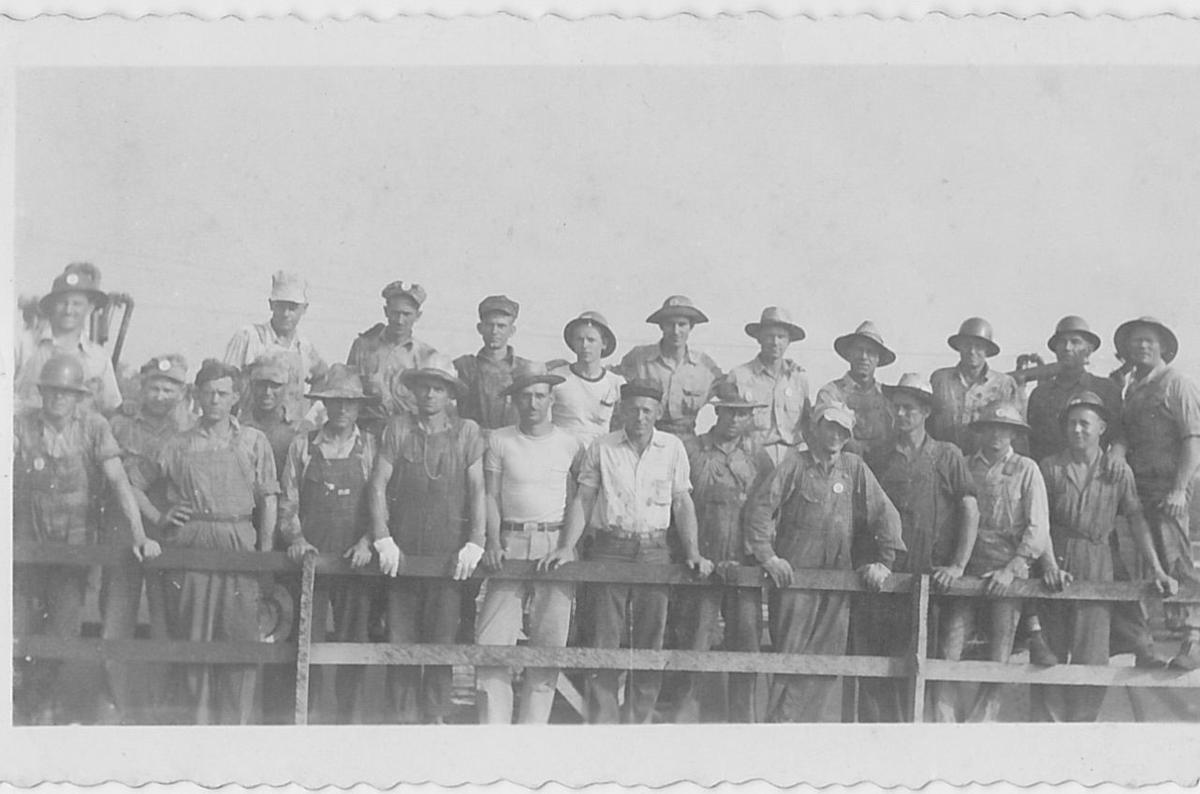 A crew of men who worked on the Big Inch oil pipeline in Norris City, Illinois, in 1942. 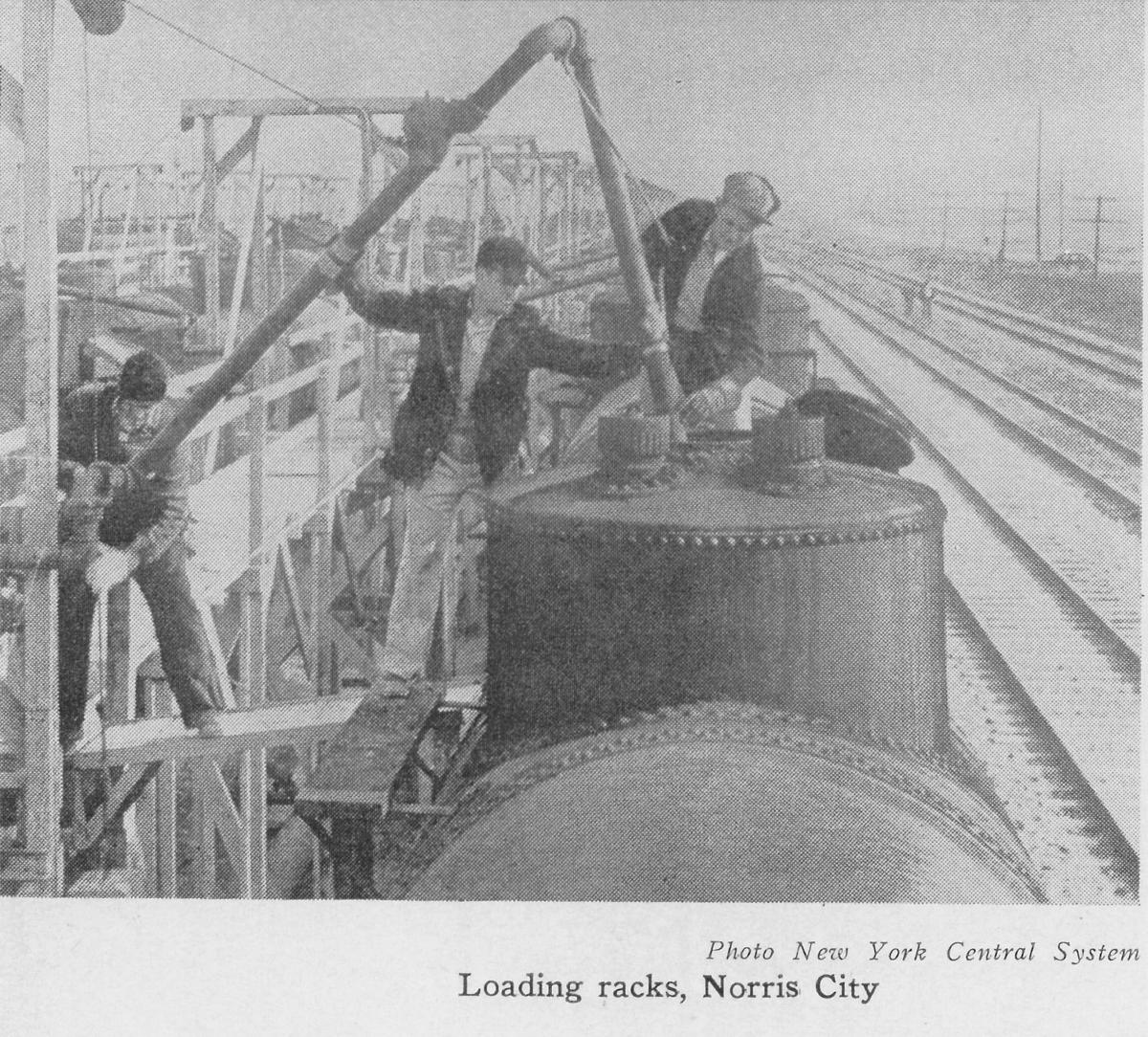 Oil is loaded onto a freight train in Norris City, Illinois. 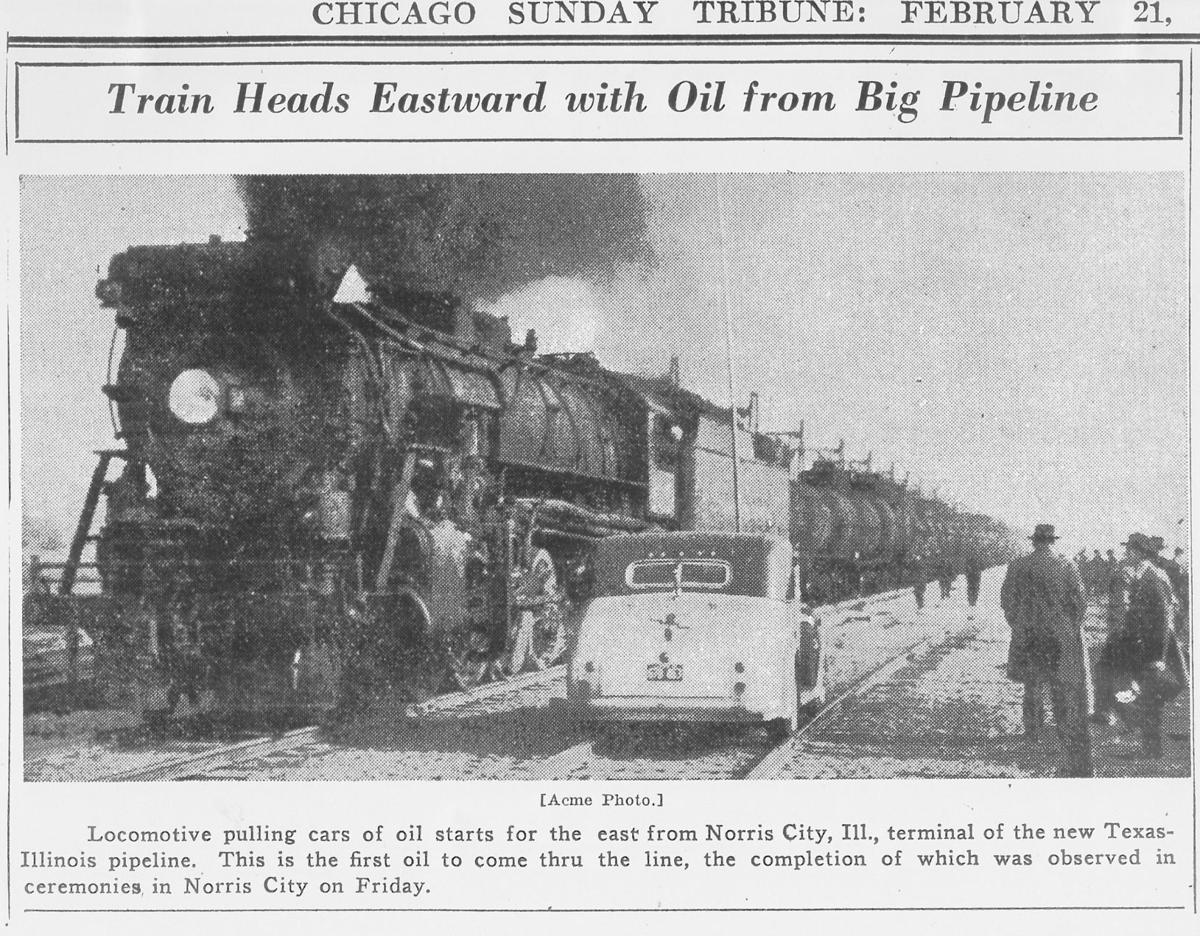 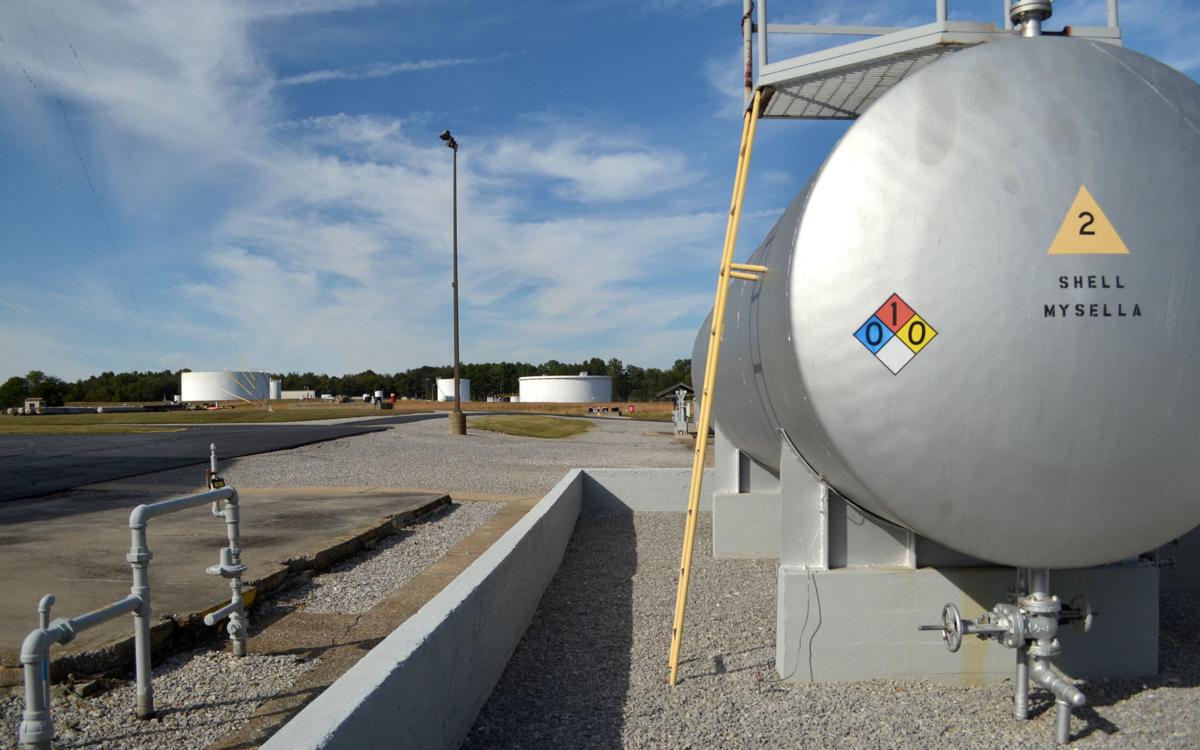