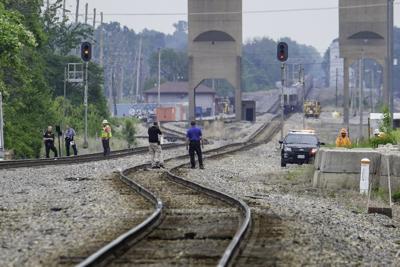 CARBONDALE — At approximately 11:29 a.m. on Tuesday, Carbondale police officers responded to the railroad tracks between the 400 block of North Washington Street and North Illinois Avenue in reference to a report of a pedestrian being struck by a train, according to a press release from the city of Carbondale.

Officers immediately began providing life-saving medical treatment to the pedestrian. They were joined at the scene by Jackson County Ambulance Service who also treated the victim.

The pedestrian was taken to SIH Memorial Hospital of Carbondale and later transferred to a St. Louis hospital for further treatment of life-threatening injuries.

The accident caused all railroad crossings to be closed for approximately an hour because of the train blocking the crossings to through traffic. A traffic alert was sent out asking drivers to avoid the area, with a second text alerting drivers that the crossings were open at around 12:45 p.m.

The name of the pedestrian is not being released at this time in order to make notifications to family.

Canadian National had no comment and referred The Southern to local authorities.

The investigation is active and ongoing.

Carbondale police are asking anyone with information about this incident to contact Carbondale Police Department at 618 549-2121.

As the Centers for Disease Control announced it recommends a booster dose of vaccine for children, COVID-19 numbers in Illinois are creeping upward.

Watch Now: Disney caught in the middle of political firestorm over Florida law

Watch Now: Disney caught in the middle of political firestorm over Florida law