The College of Agricultural, Consumer and Environmental Sciences at the University of Illinois released a study that looks at one question: Why does the repaired Len Small Levee in Alexander County continue to breach during flooding events?

Kenneth Olson, professor emeritus in the Department of Natural Resources and Environmental Sciences, and David Speidel, retired resource conservationist with USDA Natural Resources Conservation Service, took a look at the history of flooding in Alexander County. Their conclusion: The Len Small Levee is likely to fail again if repaired.

Bost tours site of barges sucked through Len Small Levee during flood; hopes to get legislation passed in 2020

“My concern is that if levee is repaired for $16 million (from the Army Corps of Engineers) plus $3 million (in local matching funds) to same location and same height, I think it’s going to break again,” Olson told The Southern on Tuesday afternoon.

The Len Small Levee is a farmer-built levee system along the Mississippi River near Miller City. It protects farm land and structures, including homes. The levee failed in 1993, 2011 and 2016. 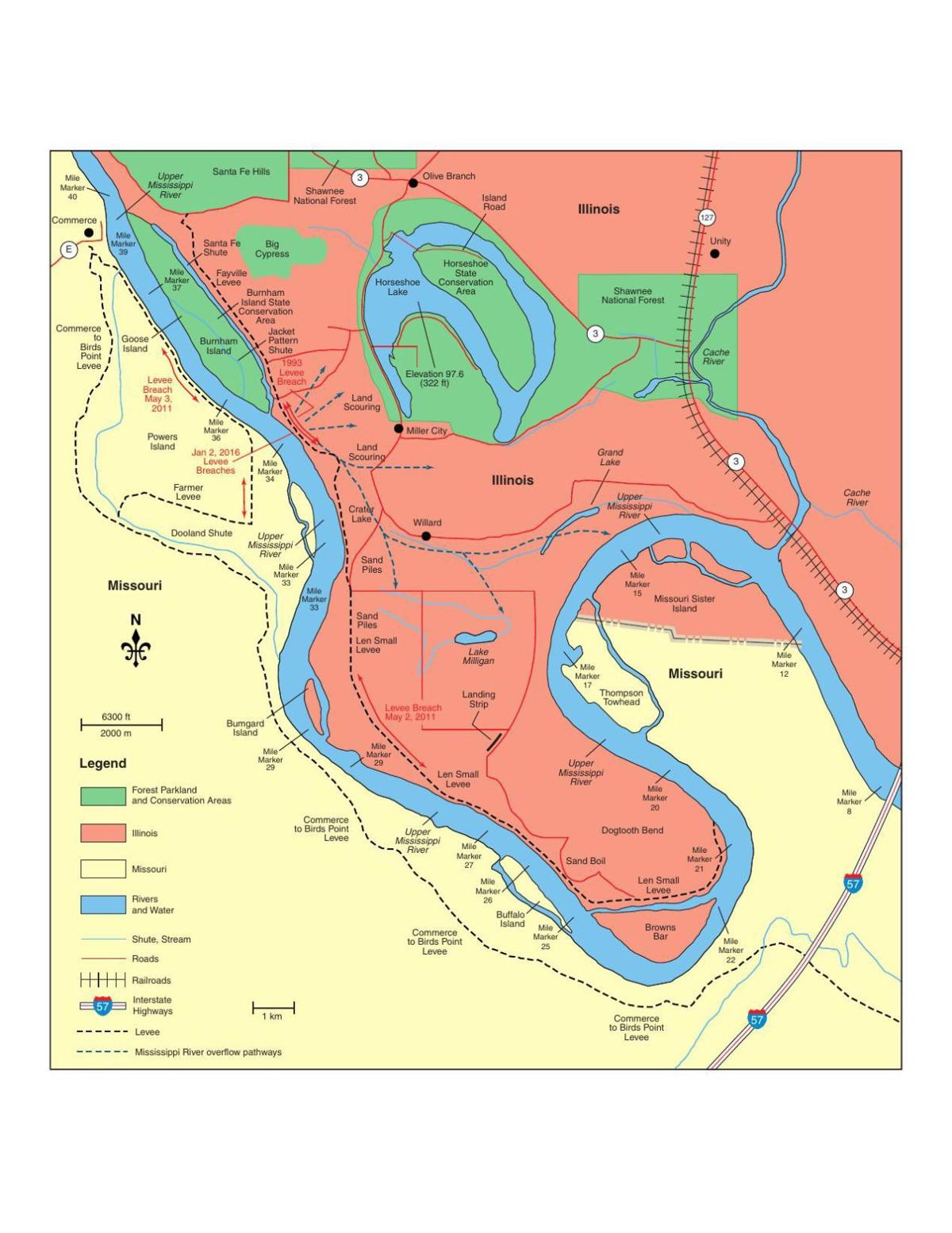 The Len Small Levee was breached in 2016 at mile marker 34. After the breach, the fast-moving water followed an old meander channel across the Dogtooth Bend Peninsula and reconnected with the river at mile marker 15.

To understand the issue, Olson and Speidel looked at the history of man’s activity on the rivers.

The Little River Drainage Diversion Channel, finished in 1915, took runoff from the Ozarks to the Mississippi River. Before that was built, natural floodplains allowed the water to escape the banks of the river during years of high water.

After the diversion channel was completed, the extra water volume caused flooding in places like Cape Girardeau. Olson said they eventually built a flood wall.

Farmers in Illinois on Dogtooth Bend experienced increased flooding and crop loss from 1915 to 1943. They formed a Levee and Drainage District and built a levee to prevent their land from flooding.

“It didn’t break until 50 years later and now it breaks frequently,” Olson said.

Olson said man’s activities are having consequences, and not just on the levees. The floodplain has been reduced and restricted. Locks and dams have some effect.

He added reservoirs like Lake Barkley have counteracted flooding in some areas. He believes that is why the floodplain, like Bird’s Point, was not opened for 60 or 70 years.

Flooding impacts not only the farmland and people living along the river, but it also degrades the road and river’s navigation channel. Dogtooth Bend Peninsula could become an island. Flooding also puts conservation and recreational areas at risk.

He suggested a shortcut to open up the river, but he does not think interventions can hold the river back.

There was a plan to save Cairo from flooding. But when the rains came, so did hesitance.

The agricultural land is degraded with several feet of sand and debris. No one can farm it and make a living. He believes it’s time to look for alternatives to agriculture and put in some a little more resilient to flooding.

He thinks the best option it to expand the Dogtooth Bend peninsula floodwater storage area and replace the Miller City to Olive Branch road with a raised causeway, making the farmland south and west of the combined causeway/levee floodwater storage and change its use to wetlands or a wildlife habitat.

Voice of The Southern: Thumbs up to Salukis, thumbs down to Len Small Levee study findings

Voice of The Southern: Thumbs up to Saluki basketball, SIU, Carbondale's new movie theater and Connect Illinois; thumbs down to the Len Small Levee study findings and flaws in Medicaid managed care.