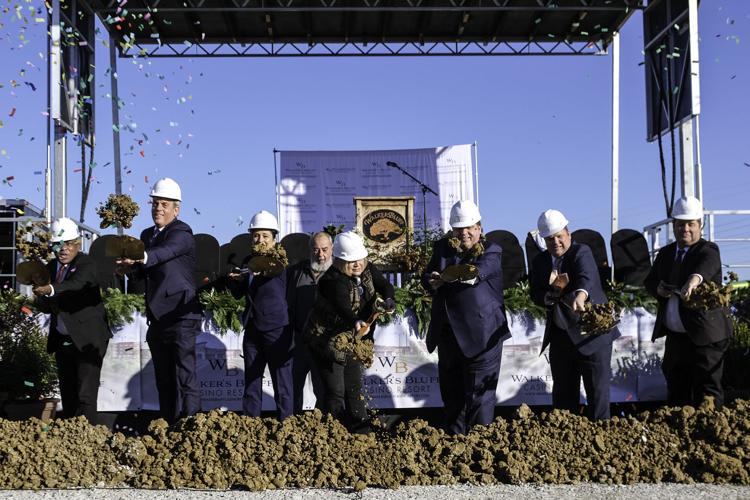 Walker’s Bluff owners Dave and Cynde Bunch are joined by Gov. J.B. Pritzker and other state and local officials along with representatives of Elite Casinos in groundbreaking ceremonies for the new Walker’s Bluff Casino Resort on Wednesday afternoon. The $147.2 million project is estimated to create more than 1,000 construction jobs and more than 300 full-time jobs when the hotel and casino opens in 2023. 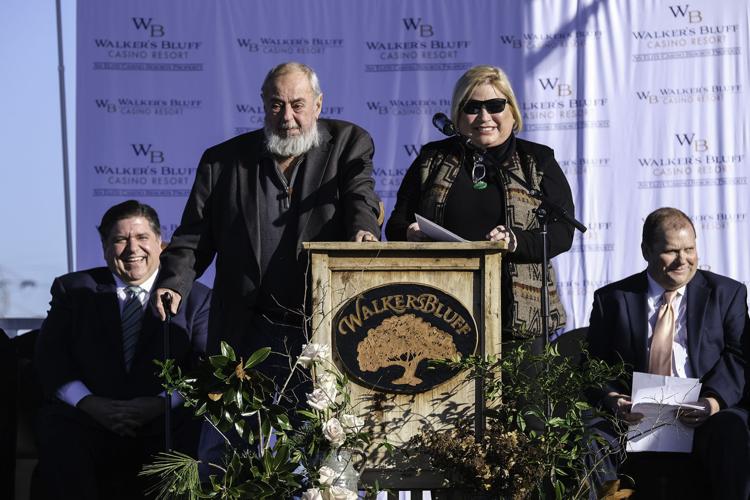 CARTERVILLE — A Southern Illinois project is now underway after a groundbreaking Wednesday afternoon at Walker’s Bluff.

Walker’s Bluff Casino Resort is $147.2 million investment that will create a 190,000 square-foot facility at Walker’s Bluff Winery. It will have 650 slot machines, 14 table games, a casino show lounge with local and regional entertainment, a 116-room hotel, full service salon and spa, three restaurants and retail space.

“I want to thank the founders of Walker’s Bluff, Cynde and David Bunch. Your vision is both beautiful and commendable,” Mendoza said.

“I stand here in thankfulness to Cynde and Dave Bunch and your tenacity for never giving up on your dream,” Fowler said.

Fowler also thanked the governor for signing bills to make the casino resort a viable project that will benefit Southern Illinois and the whole state.

“I am thankful to the governor for signing Senate Bill 1360 that guarantees this will be built by Southern Illinois people,” Fowler said.

Gov. Pritzker thanked Fowler for the work he does to bring jobs to Southern Illinois and working with him for gaming expansion and a labor agreement.

"Together we are demonstrating that bipartisanship can result in economic opportunities and job creation all across Southern Illinois,” Pritzker said.

The governor also said the casino resort will bring in more visitors and take advantage of the beauty and hospitality of Southern Illinois. He added that it will also create jobs, which has been his goal all along.

“Southern Illinois was a jewel that was neglected all along. That’s changing,” Pritzker said.

Cynde Buch said the project will create 1,000 construction jobs, with probably 800 from Southern Illinois, and that she expects them to hire women and minorities to create a diverse group of workers. After construction, the resort is expected to create 400 jobs, with 80 percent of them being full-time.

Cynde Bunch also told the crowd about her partner, Dan Kehl, and Elite Casino Resorts. His parents, Roth and Robert Kehl got the first Riverboat Gaming License in the state of Iowa and in the U.S. They grew their business to include three casino resorts in Iowa. They are building Walker’s Bluff and a casino in Grand Island, Nebraska.

He said they will continue to follow the things their parents taught them at Walker’s Bluff: To work hard, provide exceptional food and entertainment, offer a great guest experience and treat their employees like family.

The casino is expected to take 14 months to complete and will open in 2023.

From Walker's Bluff to Afghanistan, 2021 was a year for news. Here are some of my favorites that I wrote in 2021.

The Williamson County Board on Wednesday approved a resolution adopting and approving the budget for the Reed Station Road extension and infrastructure project.

The Illinois Gaming Board has approved changes to the license permit application for the Walker's Bluff Casino Resort, bringing project leader…

Walker's Bluff has advocated for years for a casino license. Only the governor's signature is needed now.

Police are still seeking the public's help in locating a man missing since October.

Cases of COVID-19 are on the rise, according to Southern Illinois health departments.

Families got to meet Santa, shop until they drop and have some snacks all while enjoying the evening with officers.

Brandon Byars did not want to pay to have a board game shipped from England. So he made his own. Today, he makes a full line of board games as a side business.

Local wineries are urging legislators to pass a bill in the Illinois Senate to provide pandemic-related relief to their industry.

The annual March of the Penguins returns to San Francisco Zoo

The annual March of the Penguins returns to San Francisco Zoo

Walker’s Bluff owners Dave and Cynde Bunch are joined by Gov. J.B. Pritzker and other state and local officials along with representatives of Elite Casinos in groundbreaking ceremonies for the new Walker’s Bluff Casino Resort on Wednesday afternoon. The $147.2 million project is estimated to create more than 1,000 construction jobs and more than 300 full-time jobs when the hotel and casino opens in 2023. 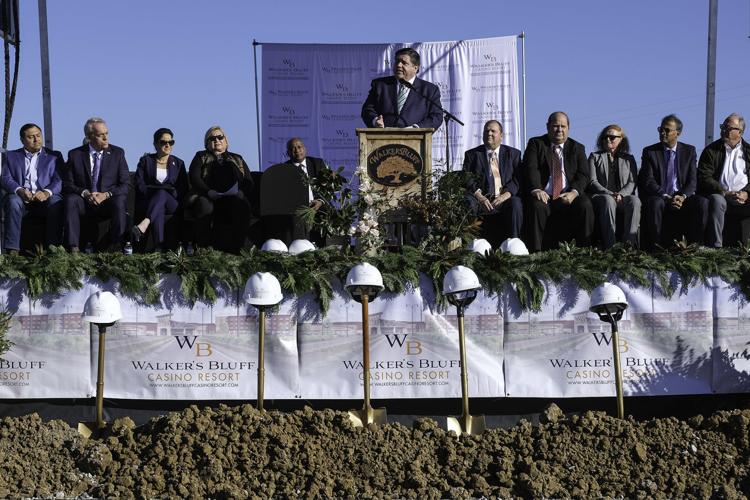 Illinois Gov. J.B. Pritzker speaks during groundbreaking ceremonies for the new Walker’s Bluff Casino Resort on Wednesday. The $147.2 million project is expected to create more than 1,000 construction jobs and when the hotel and casino opens in 2023 it will have more than 300 full-time employees. 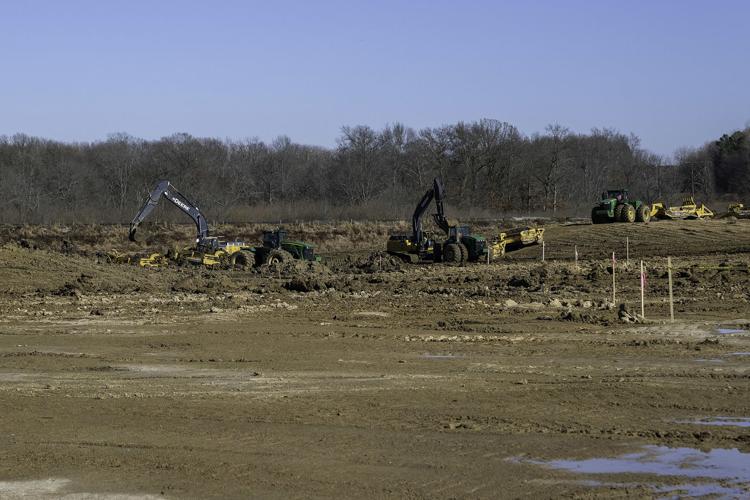 Work has begun on the site for the new Walker’s Bluff Casino Resort. Groundbreaking ceremonies for the $147.2 million project were held on Wednesday afternoon.