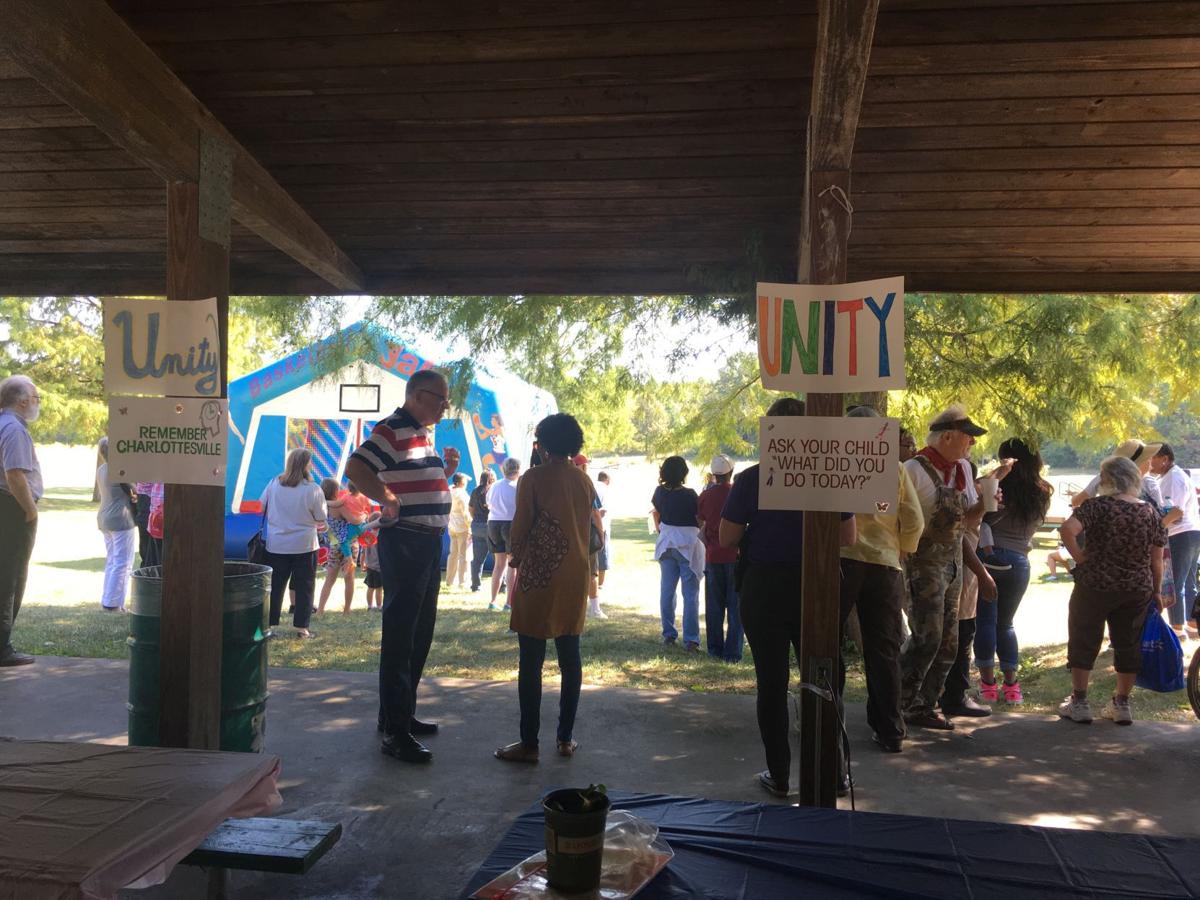 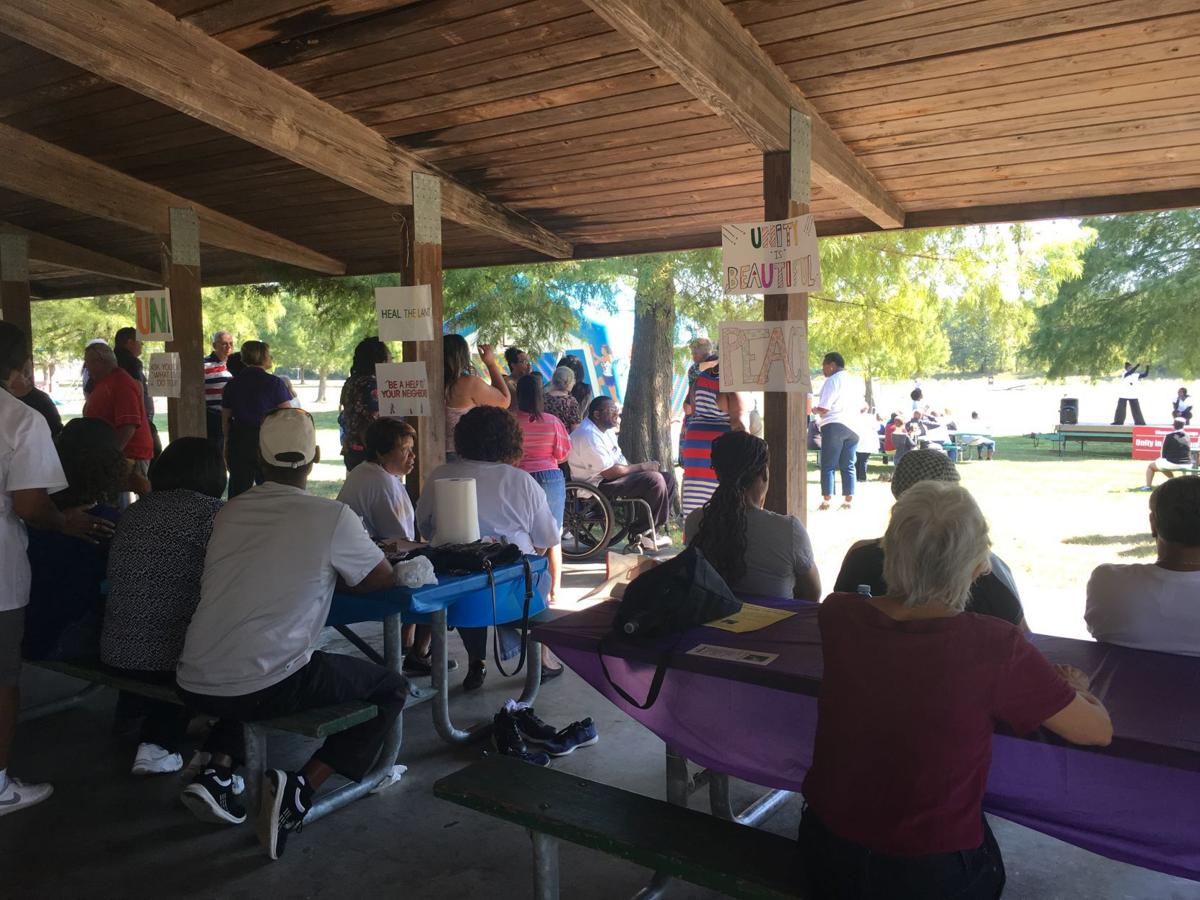 Community members sit and watch the presentation at the "Women for Change: Unity in the Community" event Saturday. 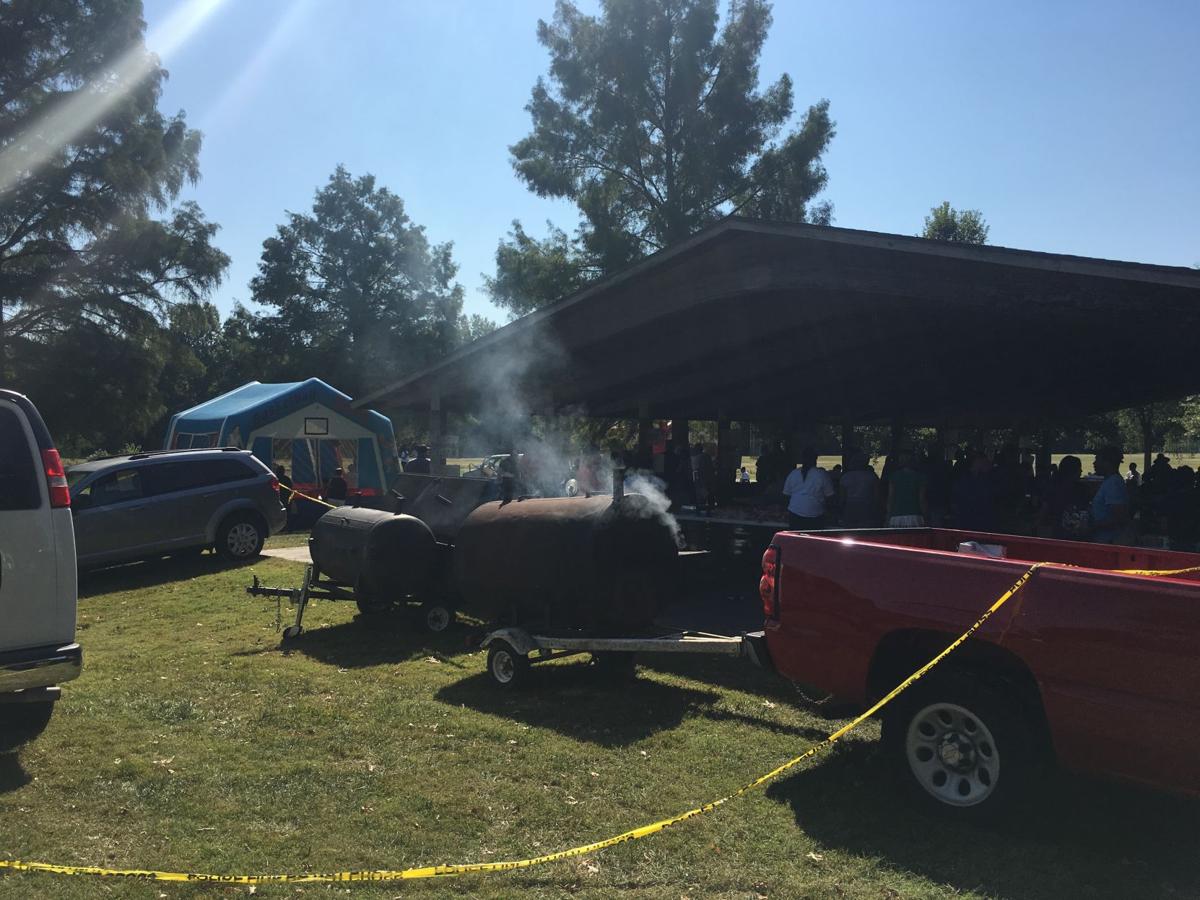 Food and festivities at the "Women for Change: Unity in the Community" event.

CARBONDALE — It’s been exactly six months since Ginger Rye’s young grandson witnessed a fatal shooting in the northeast neighborhood of Carbondale while he was walking home from track practice.

Saturday marked the six-month anniversary of the shooting of 19-year-old JaVon T. Trott, a tragedy that spurred Rye to form a neighborhood advocacy group called “Women for Change: Unity in the Community.”

The organization held a jubilant, city-backed coming-out party Saturday at Attucks Park after an early-morning march from Rock Hill Baptist Church. Several dozen community members enjoyed the festivities from under the pavilion; Carbondale city leaders were also present, along with police and fire officials. The celebration featured a number of activities for children, a free lunch and live entertainment by local gospel singers and dance groups.

Women for Change — which seeks to improve the northeast side “through beautification (and through) spiritual, social and economic improvements,” according to the group’s Facebook page — currently has about 30 active volunteers, Rye said.

“I’m sure some of you heard me say, I figured out the secret to a happy marriage for a man is to give in early,” Mayor Mike Henry told the crowd. “With this bunch of women, you don’t just give in early, you say, ‘Yes, ma’am, what can I do for you, ma’am?’ I hope that we did everything we possibly could for this group, because it’s a great, great organization.”

Henry urged organizers to keep the group going and to make the celebration an annual event.

“Help our neighborhoods. Lift them up. Give them the opportunities they need,” he said.

“We hope that we can continue to reach out, not only on the northeast side, but throughout Carbondale. Because unity doesn’t stop in one place. Unity reaches out. It’s a global thing. We want everybody to become a part of what’s going on now and what will be continuously going on in our city, in our neighborhood,” board member Janet Lilly told the crowd.

City Manager Gary Williams said he and other city officials met with Rye and suggested she create a neighborhood organization.

“We’ve encouraged all of our neighborhoods to organize, because it helps us when we have the community working with us to identify problems in particular neighborhoods. I think it strengthens the community because people get to know one another better,” Williams said.

“I said, Lord, we cannot continue this. We cannot continue along this same road with all of this crime and all of this noise that’s in the neighborhood, and no one was saying anything. … And it seemed like there were a lot of other women and a lot of other people that had this same problem on the street. No one was talking to one another. So this group allowed us to start talking,” Rye said.

Deborah Woods, vice president of the group, said the northeast side has been battling perceptions that the neighborhood is riddled with crime and violence.

“People were afraid to come over here … but as you can see, everybody’s here from all across the city and nobody’s feeling afraid, nobody’s feeling anything negative. And that’s the image we want to create. We want to clean up our neighborhood,” Woods said.

Susan Harper, event coordinator, said she was “overjoyed” about the high turnout and that the group hopes to make the event an annual one.

“It has been truly a blessing to see the children out here and to see my community together,” she said.

Rye said the organization plans to continue with its current work, including the cultivation of a community garden on Larch Street and a street awareness program, and is exploring additional possibilities, such as a program to help kids get to school.

“Somebody is grieving today, because six months ago, they lost a son, or a nephew, or a brother,” Rye said. “And somebody lost a young man in their family that is no longer living on the outside, but he’s incarcerated now. So we know that with some things, there’s pain, and pain a lot of times, and tragedy, are the things that wake us up, and say, OK, let’s get this together. … We pray for them. We pray for their families. But we also thank God that something good came out of this, and this is what came out of this, all of these people.”

Leaders at SIU once considered demolition of "the towers." Now, the three high-rise residence halls not only house students, they are getting upgrades.

A viral video by a professional bass fisherman is bringing attention to an employee of Vienna's Dollar General store.

Briana Harris was laid to rest Nov. 27, after dying from stomach cancer on Nov. 20. Later that day the family's house caught fire, and the community has been rallying behind the grieving family since.

Community members sit and watch the presentation at the "Women for Change: Unity in the Community" event Saturday.

Food and festivities at the "Women for Change: Unity in the Community" event.