Hefferman: Frazier kept his promise to Southern Illinois
0 comments
Share this
{{featured_button_text}}
1 of 2 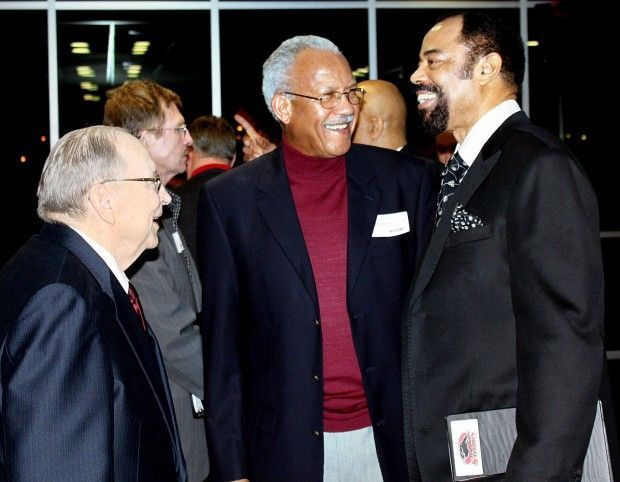 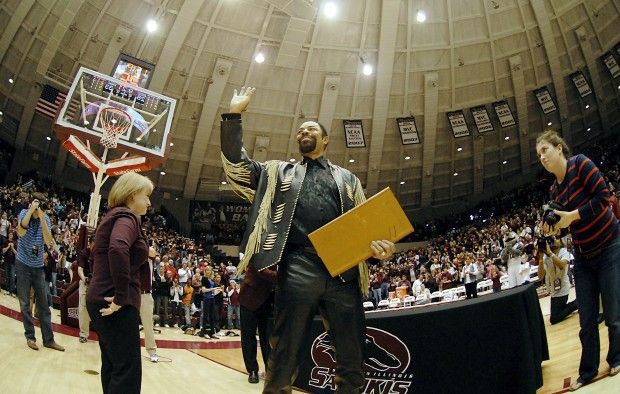 Walt Frazier, former SIU basketball player and seven-time NBA All-Star, is recognized on the court during halftime of the Salukis' game with Wisconsin-Green Bay on Saturday, Feb. 19 at SIU Arena in Carbondale.

Walt Frazier came back to Carbondale in 2011 and said it wouldn't be long before he returned to his alma mater again, but I never really believed him.

Frazier, a color analyst for the New York Knicks who was one of the NBA's 50 Greatest Players, was like seeing basketball royalty in the flesh. A seven-time all-star who won two NBA titles with the Knicks, he played with Phil Jackson and Bill Bradley. The man was as famous for his fashion, which he still commands at age 71, as his playmaking and on-the-ball defense.

His No. 52 jersey is one of three retired by SIU, along with all-time leading scorer Charlie "Chico" Vaughn and women's standout Sue Faber.

When he was here in 2011, he did nothing but embrace people. He was kind and accommodating. He met with a large group of media, myself included, as part of a celebration of the Jack Hartman era, and personally signed anything people handed to him that weekend. He charged nothing. But Frazier had very few ties to the area.

The 6-foot-4 guard was from Atlanta. Assistant coach George Iubelt was the one who had some recruiting ties in Georgia, and went down to meet the man who became SIU's greatest player. Frazier left his mother crying on the runway when he flew, for the first time in his life, to Southern Illinois.

"They'd never heard of me, and I'd never heard of them," Frazier said at a press conference earlier this month, when SIU honored the 1967 NIT championship squad that he led to a 24-2 record.

Indeed, Frazier kept his promise, and I was wrong. He called the 1967 event the Salukis put on a family reunion. He admired the arena when our photographer, Byron Hetzler, asked for the nine returnees to take a portrait on the court where he terrified opponents for two seasons.

He asked anyone at the banquet honoring the team if they wanted a picture, and gladly posed. After SIU's loss to Evansville, he and the rest of the returnees stayed and signed autographs for over an hour. Even at their alma mater, not every celebrity does that.

Frazier has the strongest ties there are to this region. The ones only he can see. Like the one of living behind the communications building with his wife and young child, and being a homebody. Of playing only defense for an entire year, his second season in 1965-66, when he was academically ineligible and Hartman wouldn't talk to him.

We only remember the killer jumper, and the man who could seem to score whenever he needed to.

We only remember the defense, and the length, and the smile. And the numbers. The 24 points and 14 boards against St. Peter's. The 26 points against Rutgers. The 21 points, 11 rebounds and five assists against Marquette in the championship game of the NIT.

And it's enough to feel like you know him.

Illinois State's men's basketball team had two preseason all-conference picks last October, but forward Deontae "Teddy" Hawkins was not one of them.

Walt Frazier to serve as grand marshall at SIU Homecoming

CARBONDALE — Walt “Clyde” Frazier, one of Southern Illinois University's most famous alumni, will return to campus next month as the grand mar…

CARBONDALE — Right after SIU's Friday afternoon baseball game against Morehead State, fans can enjoy some of the best fried fish in the area a…

CARBONDALE — Trailing Marquette by 11 points at the half in the championship of the 1967 NIT was nothing new to SIU's men's basketball team.

SIU great Walt Frazier, back in town as part of the 1967 NIT championship team celebration, talks to the media before Friday night's banquet. …

CARBONDALE — The most storied season in Southern Illinois University athletics history nearly ended with a whimper 50 years ago this March.

Dick Garrett, former SIU guard in the 1960s, talks to the media about the 1967 NIT championship. Garrett and others were honored at a banquet …

CARBONDALE — Former Saluki Walt Frazier, one of the NBA's 50 greatest players, has been selected for the second class of the Small College Bas…

Walt Frazier, former SIU basketball player and seven-time NBA All-Star, is recognized on the court during halftime of the Salukis' game with Wisconsin-Green Bay on Saturday, Feb. 19 at SIU Arena in Carbondale.