SPRINGFIELD — The statewide COVID-19 test positivity rate hit its lowest point since July 26 on Wednesday as the Illinois Department of Public Health reported 1,337 new cases of the virus among 48,029 test results reported over the previous 24 hours.

That came as Region 7 of the state’s COVID-19 reopening plan saw its fourth straight day below an 8% positivity rate, the threshold at which the state increases economic restrictions in an effort to mitigate spread. The rate in Region 7, which includes Will and Kankakee counties, was 7.4% as of Sunday. That was still higher than the 6.5% rate at which the state would start to relax some of the added mitigations, which include closing bars and restaurants to indoor service.

In Region 4, which includes the Metro East area on the Missouri border, the positivity rate remained stubbornly high as of Sunday, increasing one-tenth of a percentage point from the day prior to 9.9%.

In an unrelated appearance at Illinois State University, Pritzker also took questions on the spread of the virus at colleges and universities, ongoing contact tracing efforts and the potential distribution of a vaccine once it becomes available.

Pritzker said when it comes to a vaccine, the state will have to be ensured of its safety before it will distribute it, and he was skeptical that such a vaccine would be ready by November.

He also said the state is “well along the way” to putting a distribution plan together for a vaccine.

“We want to make sure that the people who are most vulnerable are reached first, people who are most at risk,” Pritzker said. “Because of the jobs that they have, our frontline workers, our nurses, our doctors, etc., we want to make sure that they are covered, and so on … There'll be a list by priority and of course by availability of that vaccine.”

He said Bradley University, which instituted a two-week quarantine for all students from Sept. 8 through Sept. 23, “made a wise choice for their campus,” but such a decision might not work for every university.

Bradley students will be required to quarantine in their residence hall, Greek house, apartments or houses for two weeks as the campus goes to remote learning. Pritzker said it is better to have students quarantine in place on campus rather than sending them home where they could infect others.

More than 1,300 Illinois State University students have tested positive for the virus since the fall semester began, and the rolling seven-day positivity rate was 13.7% as of Wednesday, according to the WGLT-FM radio station.

Pritzker was asked if the state was quick enough to distribute funding to help counties set up contact tracing efforts since places like McLean County, where the university is located, were overwhelmed with new cases.

“The state has distributed that money as fast as it could,” Pritzker said, noting that the legislative session allowing for the distribution of funding lasted only four days in May. “That allowed us to distribute those funds to the various county boards of health, to the county departments of health, and then they've been in the process of hiring up since then.”

Pritzker said the Illinois Department of Public Health does not dictate to local health departments how quickly such contact tracing programs should get up and running.

“There is a partnership, and it's a good partnership, but it is up to the county departments to make the decisions about how, how quickly, etc., they're able to hire, and we've distributed those funds so that they could hire.”

Later Wednesday, Pritzker's office said there are more than 2,100 contract tracers working throughout the state through county health departments. All local health departments are receiving grants to hire and train more contact tracers, according to a spokesperson for the governor.

The City of Chicago and Cook County are "working through their own process to hire their additional contact tracers" and are expected to begin hiring in October, according to the spokesperson.

Southern Illinois University Carbondale on Wednesday reported 57 cases affiliated with campus: Nine are students who live on campus, 47 are students who live off campus, and one is a faculty or staff member. The cases reported by SIU reflect current active cases, and reporting of campus affiliation is voluntary for those who are diagnosed with the virus.

There have now been a total of 253,690 cases and 8,214 virus-related deaths since the pandemic began in Illinois, and IDPH reports the recovery rate is 96% for those 42 days removed from a positive diagnosis.

At the end of Tuesday, hospitalization numbers for the virus remained roughly steady at slightly above pandemic lows, with 1,580 people in Illinois reported hospitalized with COVID-19, including 357 in intensive care units and 133 on ventilators.

— The Southern staff contributed to this report.

Illinois GOP investigators hope to get answers from Madigan

Republicans who will serve on a committee looking into Michael Madigan’s role in a bribery scandal involving Commonwealth Edison said Wednesday they hope the Democratic leader will speak directly to answer questions.

Some lawmakers and stakeholders are asking Gov. J.B. Pritzker to hold off awarding 75 marijuana dispensary licenses amid concerns that just 21 applicants qualified for the first round of licenses.

Republicans in the Illinois House unveiled a single charge they hope to bring against Democratic House Speaker Michael Madigan, accusing him of “conduct unbecoming to a legislator or which constitutes a breach of public trust.”

The new coronavirus is as complicated as the testing for it, but as the country tries to find the best way to curve the spread, one thing could stand in the way of everything the NCAA wants in order to return to normal. 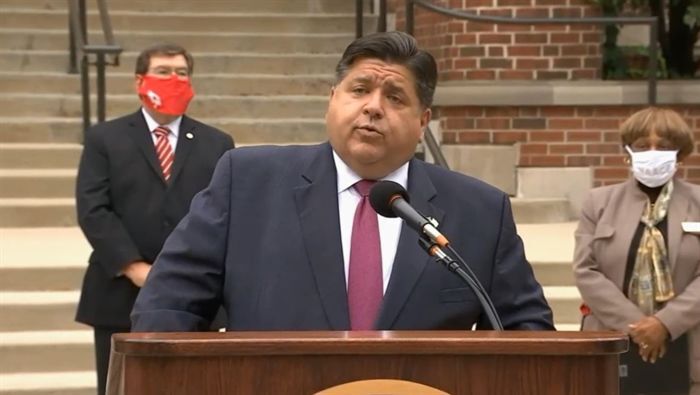 Gov. J.B. Pritzker takes questions from the media Wednesday at a census-related news conference at Illinois State University in Normal.